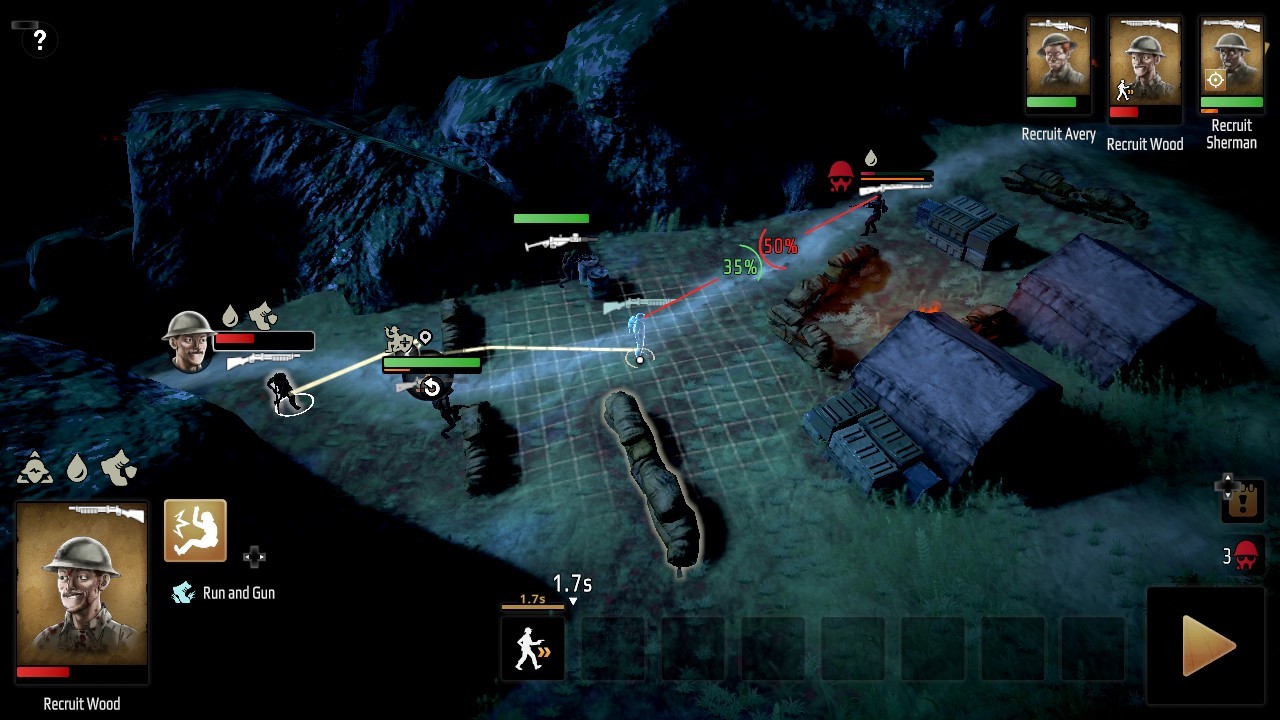 The horrors of war can mean many things. The most immediate thought that comes to mind, is the horrific atrocities that conflict can bring: death, mutilation, famine and disease. However, it can also be applied to other aspects of being within a war scenario. After all, being the target of a thousand guns is a scary prospect, as is storming an area that you know will be raining with bullets, shrapnel and bombs. Again, a pretty horrific time. Then there’s the hopelessness of being lost, shot down behind enemy lines and being short on supplies and ammunition; all with a loss of bearing and direction. Now, that is scary. It’s something that’s also portrayed in an effective way through the narrative of PortaPlay and Super.com’s Broken Lines as it escapes a release onto the Nintendo Switch.

Based within an alternative vision of the Second World War, Broken Lines charts the story of a unit of British soldiers who find themselves stranded behind enemy lines after being shot down during a daring mission. Based in an Eastern European setting, this tactical role-playing game sees you guide your squad through dangerous and hazardous landscapes, confronting and avoiding enemy attentions; all within the scenario of limited supplies and ammunition. However, despite being on the front, the game also plays on a number of other fronts; presenting a narrative that faces moral questioning, as well as witnessing the horrors of war and another horror that can only be found within this alternative setting. Unfortunately, I can’t delve any further into this, as doing so would present some pretty big spoilers!

Using a technique of real-time and turn-based strategy and movement, this tactical role-player builds upon the blueprint set by the infamous X-Com; producing a strategic level of gameplay that involves issuing a string of commands and movements to each member of your unit, as well as a stop-start mechanic that allows you to rethink strategies should the unexpected appear on the battlefield. It works by plotting your characters’ actions based on the environment around you; sticking to cover, performing reconnaissance of the immediate area and engaging with enemy forces. Once all of your moves have been planned, the game then plays out in a series of eight-second real-time scenarios. However, if a new threat arises or an event triggers, the action pauses again; allowing you to react to any new occurrences or simply carry on your chosen path. 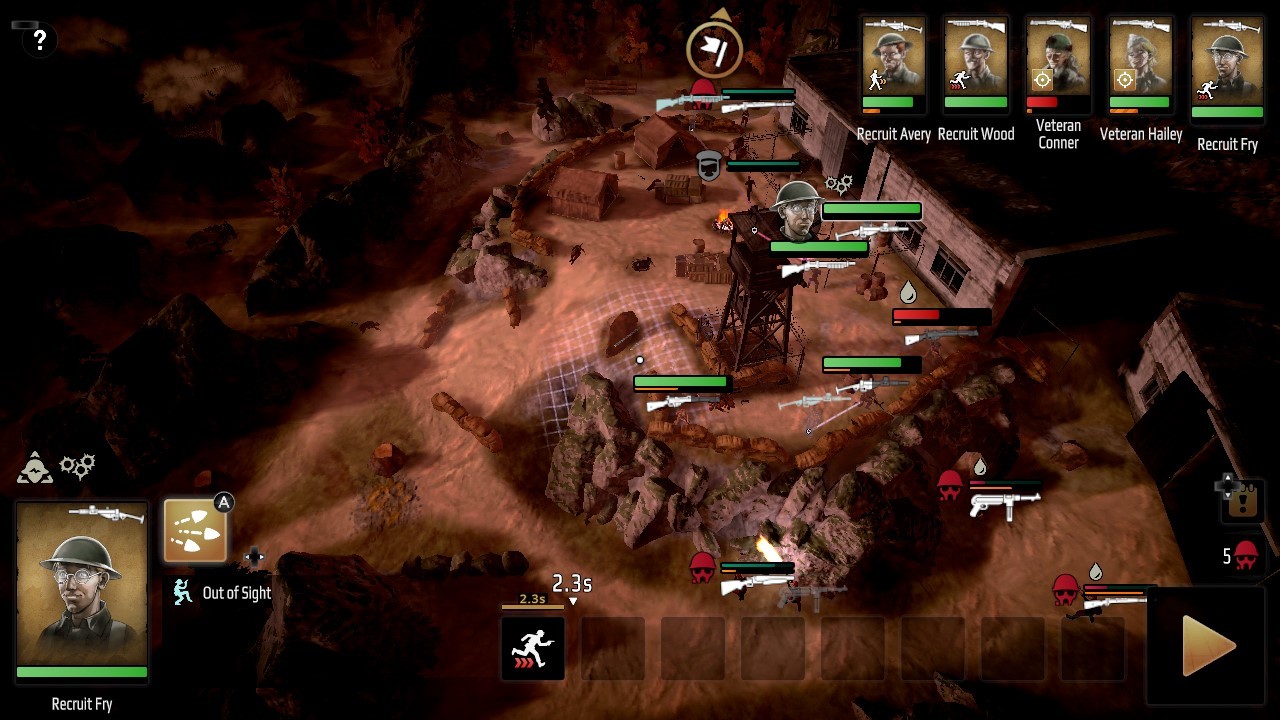 With each combatant within your squad, you can string together a series of commands before unpausing the action to see what unfolds. However, as well as your own orders, the AI of your unit members also does a sterling job of reacting for themselves, often running while gunning or giving a running commentary on their current situations. It brings the whole concept of tactical turn-based combat to a new level and forces you to think out strategies before issuing orders, but in a very fair way, also presents opportunities to change tactics, orders and movements to adjust to an ever-changing battlefield. However, not only do you command your squad with their actions, but you also play a pivotal role through a selection of choices within the narrative that changes the course of the story.

Squad selections, area location choices and moral dilemmas are all part of the decision making within a war scenario, and it’s no different here. It sounds complicated on paper, but an extensive tutorial puts you through your paces within a basic training exercise, before you embark on your mission; safe in the knowledge that you now posses all the relevant information needed to ensure your survival on the battlefield. However, the game also allows you to create a more tailor-made experience, with the usual default settings of difficulty, as well as a series of further options that allow you to dictate enemy spawn rates, ability usages, damage modifiers and many more; making this an ideal game for newcomers to the genre and experienced gamers alike.

Once training has been completed and the preliminary mission won, the game opens up through a variety of choices in how you proceed with your mission to get back home. You can choose what area to investigate or what mission to undertake, as well as pick from your roster of soldiers, which units to take with you as you form a squad of up to four or five combatants. As well as this, you also make the final decisions should any squad member find themselves in a situation of moral standings; all of which have a bearing on the final outcome of your story. The game contains a total of twenty-one missions that can be undertaken; giving this title an overall play-time of between seven to ten hours. However, depending on your actions and choices, not all of the missions available to you will be experienced through one playthrough; extending its long-term appeal as you replay the game in order to make different choices and embark on missions that weren’t selected the first time around. 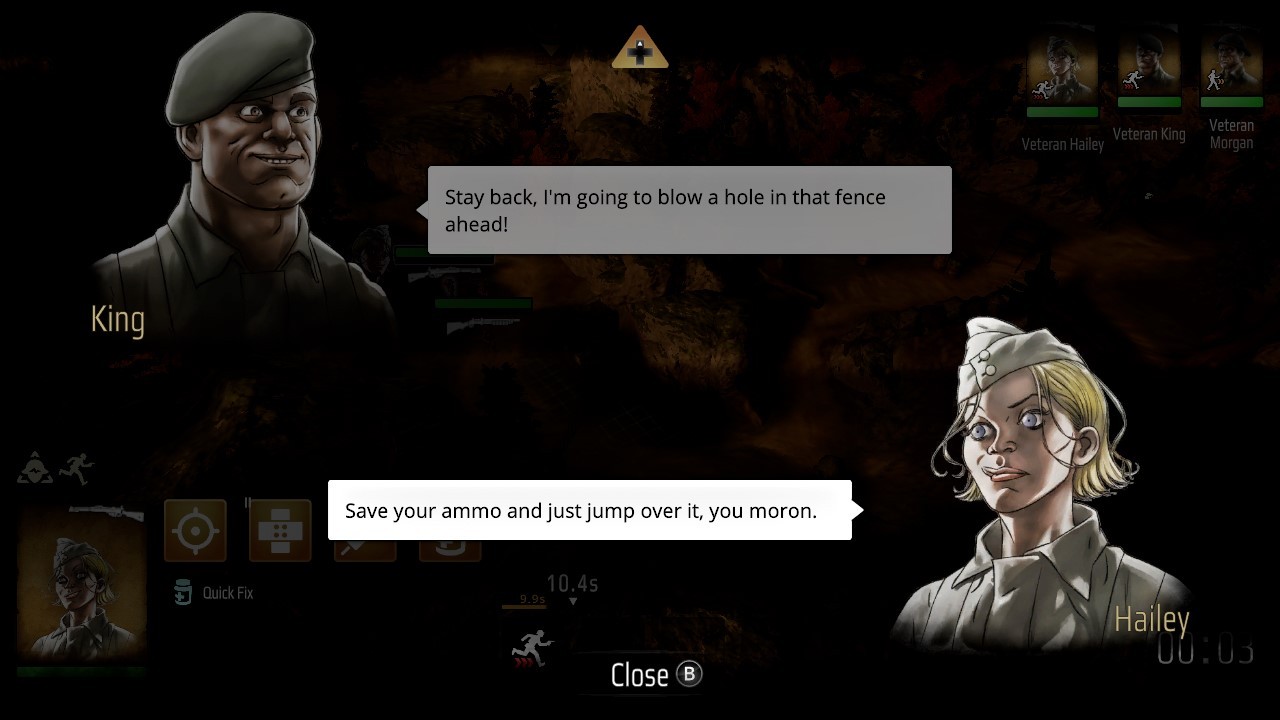 In terms of presentation, the game does a great job of presenting the narrative through a series of comic-style cut-scenes and spoken word. The soundtrack and effects too, present a great atmosphere; often teeming with tension as you traverse the unknown terrain around you. A nice level of animations and detail also bring each of the levels to life, with running commentaries, real-time events and choices regarding movement and combat to make the best use of your squad. Each unit within your squad needs to be dealt with depending on ability. For instance, those in possession of long-range rifles need to perform suppressing manoeuvres, whilst shorter range combatants flank the enemy for more close-quarter combat. You can also utilise grenades to provide cover, or knock-down enemies in order to stun and disorientate them.

It all comes together to produce a compelling and tactical role-player that combines many elements to great effect. Its pacing can be a little slow, but in time, its mechanics work in such a way that you’ll begin to appreciate its pacing, care for your squad members and rejoice at completing missions unscathed and unharmed. The choices you make also create pathways for you to tread, changing the face of the game and forcing you back in as you try different tactics and missions to alter the course of each game you play.

Overall, Broken Lines is a very accomplished game within the genre of strategic and tactical role-playing. Its amalgamation of real-time and turn-based mechanics, as well as the ability to string commands, produce a unique experience; especially with the need to think strategically for each individual unit. The narrative also does a great job at pushing the story forward and without giving away any spoilers, its alternate universe throws up a few surprises along the way to test your tactical level of gameplay. It looks fantastic and sounds great, with all of its elements combining to produce one of the best examples of its style to date. Form an orderly line men, as this is most certainly a game that is in no way broken.

Broken Lines combines turn-based and real-time tactics in this role-playing adventure set during an alternative setting of the Second World War.