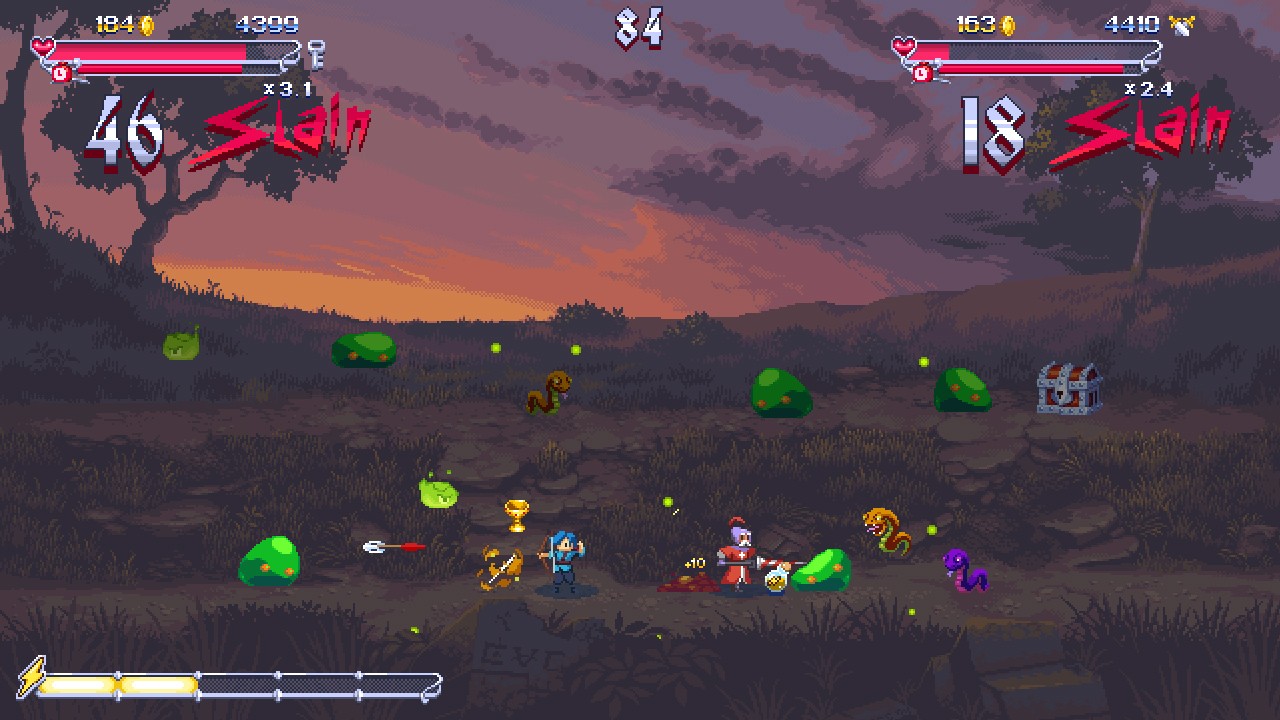 There is no shame in making a mobile game, no matter how much shade I may throw at mobile games ported to the Switch. People love to play them, some of them are incredible in quality and they all serve the purpose of entertaining for a while; unless their purpose is to addict you and get you to buy stuff through microtransactions, at which point it isn’t a game, it’s a Skinner Box and you should be ashamed for publishing such trash. No, for great mobile gaming, it’s something that draws you in and keeps the game going in either long runs or short sprints, and nothing better encapsulates that idea like a game called Slayin. At the peak of decent mobile gaming, Slayin had all the great elements: it was challenging, it had variety and replay factors, it was enjoyable, and it was easy to control. I remember a coworker perking up when I mentioned the game and demanding that I bring out my phone so he could see how well I had done (he had put in much, much more time than I). FDG Entertainment could have made a decent little chunk of change just porting their highly successful game onto the Switch, but that wasn’t their style. Instead, Nintendo users get a brand new experience in the unexpected sequel, Slayin 2.

For those unaware, Slayin was a fantastically addictive but primarily simple mobile game. You run back and forth on the screen, attempting to hit enemies with your basic weapon by running into them, occasionally needing to jump, dodge and weave around different enemy types. You kept going until you ended up getting killed by whatever wave of enemy was too strong. Over time, you use the wealth that you accumulated in order to unlock different things about your character, like a stronger weapon or better armor, but it was all roguelite: whatever you got was only good for that run, and you needed to do your best to create and navigate your way through the best run possible. Slayin 2 does remember and incorporate this core gameplay, so don’t worry if you’re concerned about missing out on the repetitive but incredibly fun style of action. The arcade mode is available from the drop, so feel free to relive the classic experience if you’d like, but I really need to encourage everyone to jump into Story Mode at their earliest convenience, because it’s the bulk of the real game (not to mention fantastically more exciting). 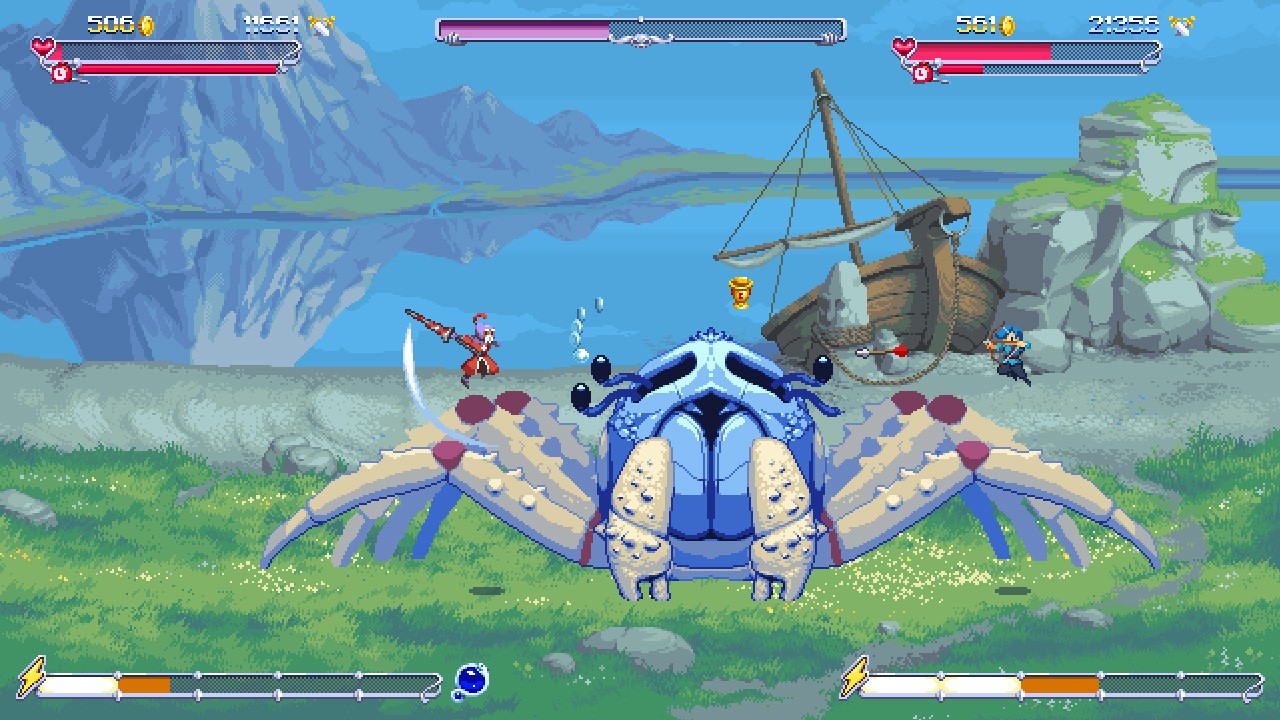 Story Mode allows Slayin 2 to flex and showcase what FDG Entertainment can really do with their original IP. Giving players a very traditional backdrop (noble knight, epic quest, evil baddies, etc.), Slayin 2 creates an episodic, nonlinear storyline that allows players to explore the world of Slayin in a brand new light. Instead of just running back and forth on the screen, you get capsules of stages that have objectives and bosses that actually lead to something. After a couple of quick levels to make sure you understand the core control mechanics, you get access to the first village, where the money you get from slain monsters gets put to work. You can rebuild demolished buildings for the right price, upgrade and unlock weapons, get temporary buff charms for your next battle and, most importantly, hire new heroes to be a part of the quest. Don’t get me wrong: the classic knight character is phenomenal, and is a real strength in the new gameplay world of Slayin 2 (which we’ll talk about in a moment). But having variety within the heroes makes the game more exciting and offers different approaches. For example, the sorceress is a bit slower, but can double jump over enemies, which is a pretty solid strategy for certain batches of mobs.

Getting into the meat of Slayin 2, the combat might sound incredibly simple and silly at first: run back and forth across a 2D screen into baddies. Yet the game quickly pulls back the curtain to reveal a much more complex and exciting framework to maximize enjoyment. Making sure to continue the combo of slays makes better and more expensive treasure drop, which translates into stronger incentive to make sure you stay on top of enemies. Flying, jumping and even teleporting monsters make for split second reactions, asking you to turn on the spot, cross into new areas or fire off special attacks that come in a rechargeable bar called the Spark Meter. More importantly, Slayin 2 brings a second plane of combat that you literally need to leap between, incorporating in the right shoulder button to get you to hop to the foreground or background, depending on where enemies are. Not only does this make the combos build more quickly and challenge you to act more precisely, it can also mess with your perception. Is that spider descending from the ceiling in the back or front? Is that arrow going to hit you, or sail harmlessly by because it was shot by the centaur in the other lane? It’s especially exciting to try and figure things out with very little time to react, because health restoratives are not as plentiful as the standard treasure, and nothing ruins a good fight like seeing that you’ve been slain. 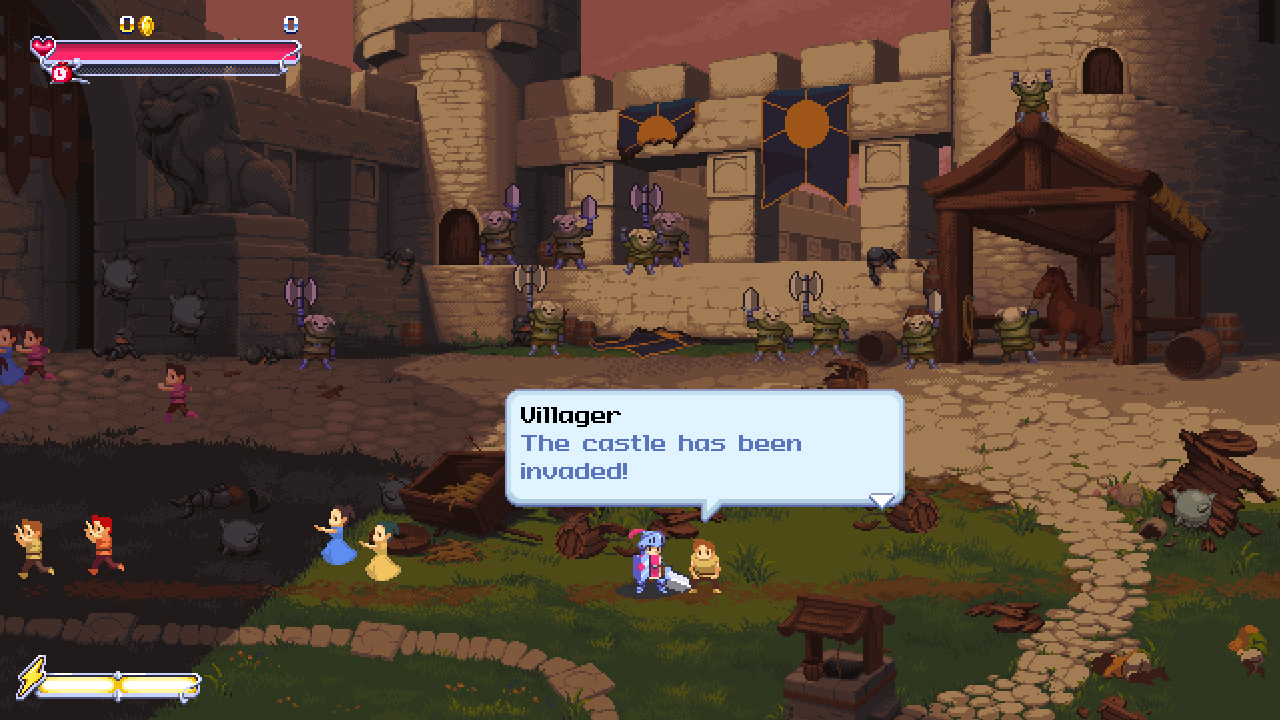 The rest of the full experience comes into seeing the fine details of Slayin 2. The graphics are incredibly pumped up compared to the pixel art style of the original, with beautifully detailed sprites, smoother presentations and more colorful arenas. Each hero has unlockable weapons, which, in turn, can be upgraded and fine tuned to your play style. Are you more reliant on speed, luck, or the hope that a Spark attack will save the day? You can have short but colorful dialogue with the townsfolk, which sometimes results in new quests branching out or eventually leads to another hero being added to your roster (for a price). And the bosses are genuinely fun and challenging, because, when most of your strategy involves getting well within striking distance, you need to be able to figure out the best way to attack and stay alive, and the bosses often have multiple stages or combat approaches. Best of all, you don’t need to go at the adventure alone: the co-op fight lets you and a friend take to the double lane and make the most out of mincing up the enemies. It’s actually incredibly cool: when you get into a good rhythm with a fellow adventurer, it becomes a deadly ballet of leaping and changing directions, and the two of you are pure panic machines. If you’ve got a friend who’s willing to learn the ropes, it’s certainly worth the effort.

It’s the best of both worlds. Slayin 2 brings back the classic, very addictive play style of the first game while making sure to expand, grow and further detail the complexity that’s available in a more meaningful game direction. As a huge fan of the first and someone who loves games that keep you on your toes, this was a match made in heaven and perfect for work commutes on the now desolate trains. Don’t short yourself: get in on the ground floor, polish up your sword and get to Slayin.