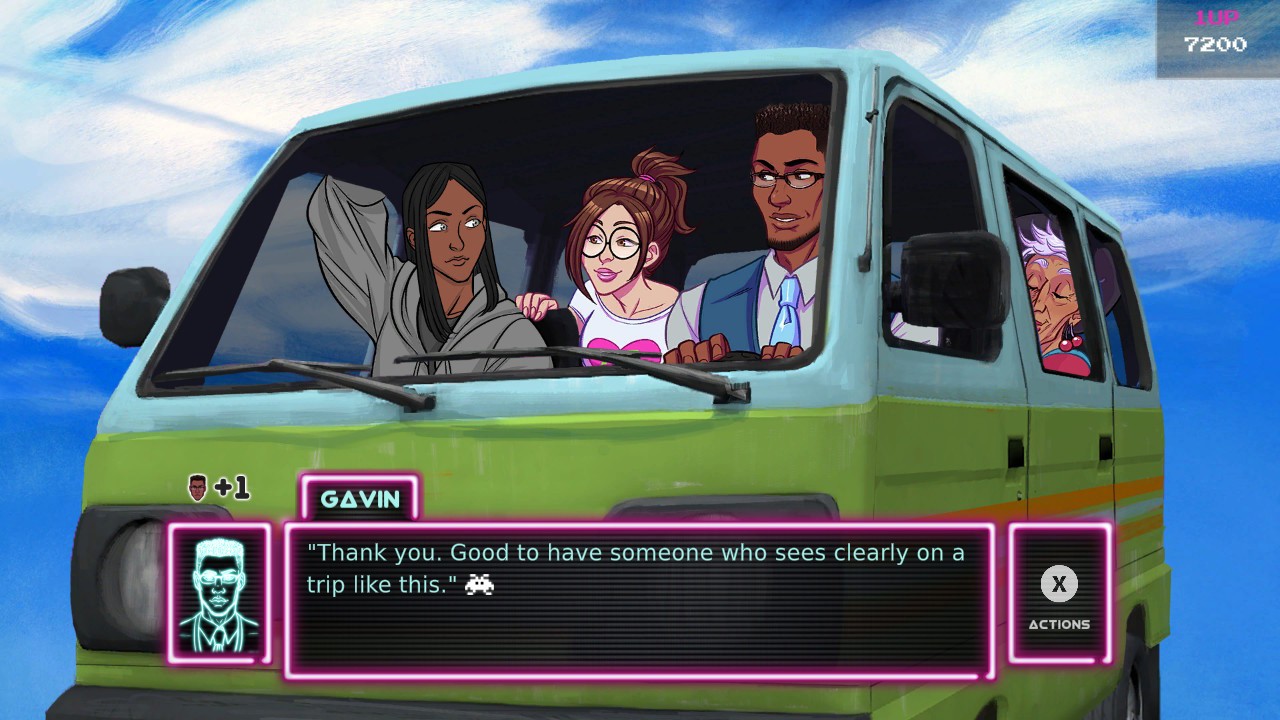 Imagine if you would, a world in which, well, Coronavirus doesn’t exist. Ok, got that – people can go to the shops and bars and oh holiday and stuff – cool? Ok, now also try to imagine a world in which Atari pumped the brakes on their infamously trashy E.T. video game, delayed the release and actually made a half decent movie tie-in. Well, in that world, the video game crash of 1983 never happened and the industry went mainstream much earlier with arcades (you remember those, right?) remaining hugely popular well in to the 21st century – I know, sounds like heaven, no? Well, that is the world of Arcade Spirits, a modern day, alternative reality romantic visual novel filled to the brim with pleasingly gaudy neo, a vibrant cast of interesting characters and arcade cabinets aplenty.

Whether you actually like this game will have a lot to do with your tolerance for visual novels. They are far from the most traditional of video game genres, but they do have their own uniquely likeable qualities that invariably allow for a lot more character building in a much shorter space of time – turns out it’s easier to deliver genuinely compelling character progression when you’re not spending most of your time shooting things in the face. Of course, that invariably means a lot less, well, shooting things in the face, but if you can live with that, it remains a genre with plenty to offer.

Saying that, while there are plenty of great modern examples of the genre, the vast majority still come from Japan and they, well, they’re mixed bag of quality and, uhhh, content. Even the best Japanese visual novels can have some tonally questionable stuff in them, but pick the wrong one, and you’ll essentially find yourself playing an interactive hentai. Saying that, if you’re not keen on the more OTT sexual exploits of many a Japanese visual novel, you can always give the far more gentle likes of the adorably bonkers, Hatoful Boyfriend a go – after all, everyone loves pigeon romance. Arcade Spirits might not have much in the way of pigeons of course, but it does share in its more lighthearted tone. 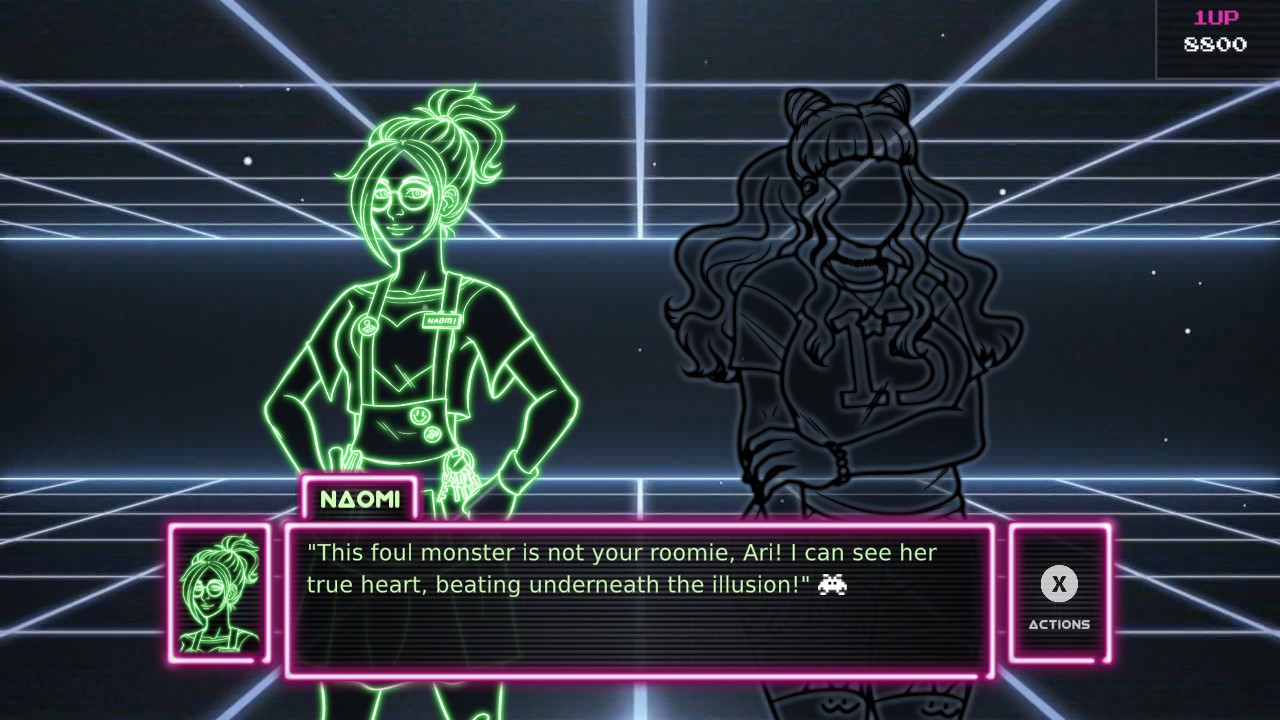 Arcade Spirits doesn’t have any of the odder stuff found in some Japanese visual novels and certainly doesn’t share in the often questionable depiction of female characters found in those game. Here, it’s anything but – in fact, Arcade Spirits has to be one of the more inclusive video games I have ever played. It doesn’t smash you over the head with it, but by delivering additional pronoun options and a more open approach to sexuality and romance, it delivers a game that, while still lacking a little depth, does a good job of allowing players to experience the game the way they want to.

And that all starts with the character customisation – it’s pretty limited in comparison to most games, but by being able to choose ‘he’, ‘she’ or ‘they’, it’s already somewhat ahead of the curve. I’m still not sure if ‘they’ makes any sense grammatically, but as a heterosexual male, I really couldn’t give a monkeys. If it helps others with identification and relatability, then yeah, I’m all for it. The other options could have done with some padding out, and the template, while understandably gender neutral, does feel a touch bland without a wider range of visual customisation options, but for the purpose of the game, it’s mostly fine.

Where the game does excel is in its great cast of characters, potential romantic partners and brilliant arcade-based setting. As you start upon your new ‘career’ working in the kind of arcade that I so wish still existed this side of Japan, you’ll get to meet an eclectic cast of interesting, diverse and well written characters, many of which you can naturally chose to try and romance. The overall narrative isn’t anything particularly special (beyond the unique setting I suppose), but the tone throughout is fun and the writing consistently entertaining. 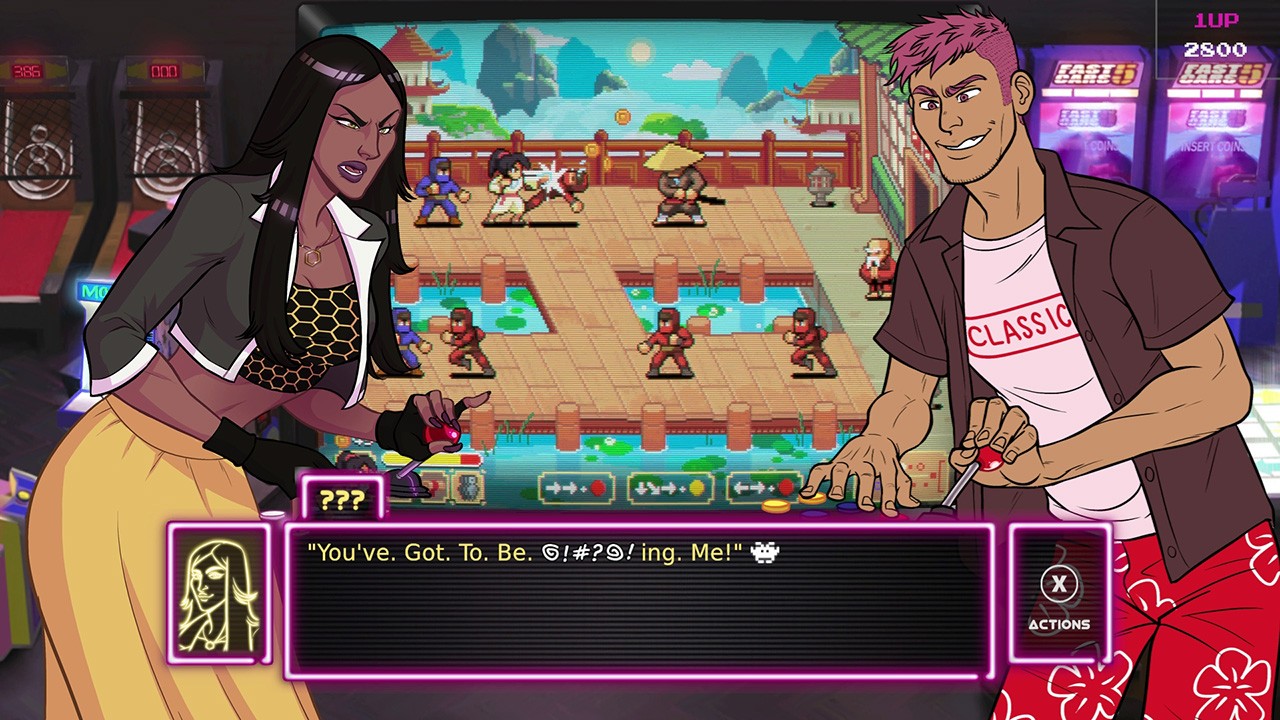 The mechanics are understandably basic with little to do beyond choosing the ‘correct’ narrative paths with your potential love interests, but with plenty of dialogue options and a basic but perfectly suitable upgrade system available, Arcade Spirits remains engaging throughout. Being able to upgrade your personal stats under quirky, kindly, steady and gutsy etc might not sound all that important, but it does give the experience a bit more of a ‘gamey’ feel, and for me at least, kept me connected to the experience beyond the core narrative. This can be turned off for those who simply wish to breeze their way through the dialogue options, but I for one appreciated that minor, but effective bit of gameplay depth.

Romantic visual novels aren’t for everyone, but for those with even a passing interest, Fiction Factory Games’, Arcade Spirits represents a brilliantly written introduction to the genre, one that, video game or not, manages to tell an interesting and beautifully presented story. It’s unique alternate reality setting is a huge draw of course, but honestly, the games’ trump card has to be its eclectic, charming, diverse and often compelling cast of characters. Attempting to woo the ones you like is obviously fun, but just getting to know many of these surprisingly interesting characters is entertaining enough in itself. It’s a shame that the customisation options aren’t a touch more robust, but that is a minor criticism of what is an otherwise fantastically enjoyable experience.

Fiction Factory Games’, Arcade Spirits represents a brilliantly written introduction to the genre, one that, video game or not, manages to tell an interesting and beautifully presented story.