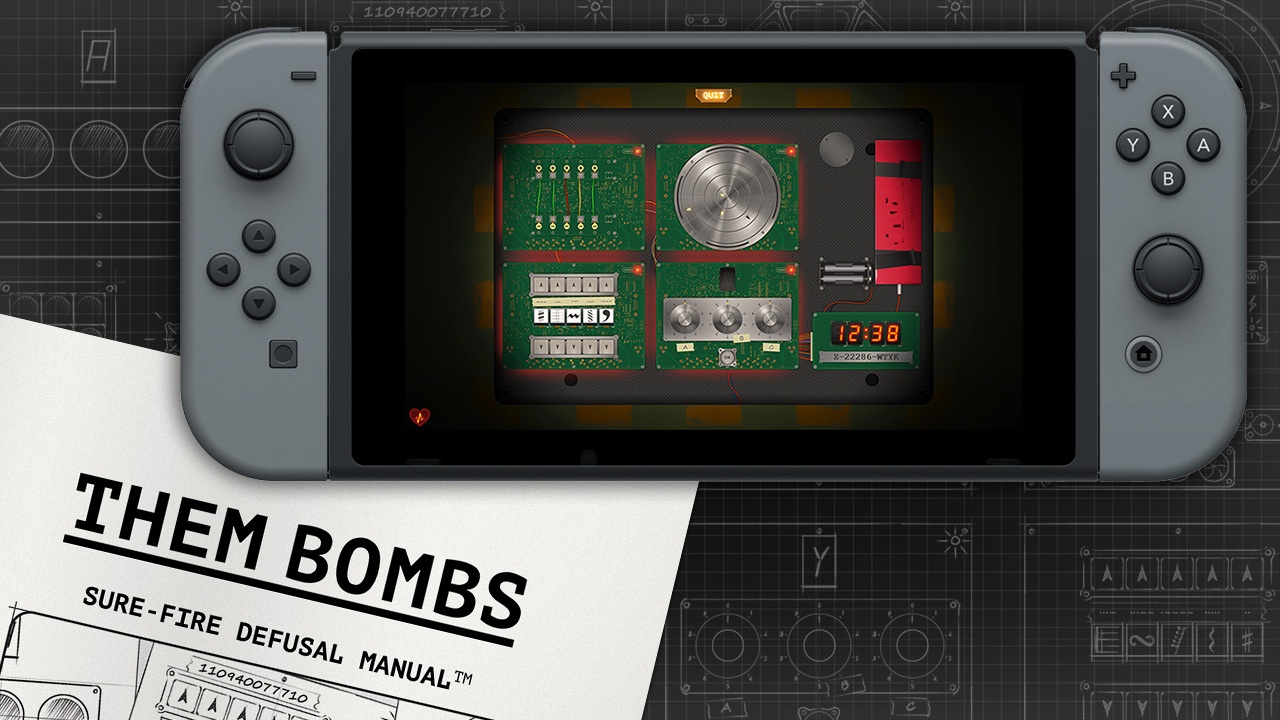 There was a period of time where it was believed that imitation was the sincerest form of flattery. Some things that helped this idea along were a.) the original idea often was well established before being copied and b.) the imitators usually brought something to the table to offset the blatant copying. But the world is big and the Internet, inexplicably, is even bigger. So when a popular PC game comes out and delights critics and fans alike, it’s easy for a bunch of people to copy the concept and release it elsewhere without drawing too much poor attention. How many Pokémon clones have you found on the App Store? Angry Bird (and Flappy Bird) knockoffs running rampant on Google? But, again, as long as you bring something new, it should be okay. Or, ing he case of Them Bombs, as long as you don’t get caught.

Them Bombs is a party game of sorts that relies on two players, though it’s totally possible to do it solo (or, inversely, with a whole bunch of people). The nefarious Dr. TiNT has placed an explosive somewhere in a crowded neighborhood/bus station/Denny’s somewhere in the world and has given a letter to one person: you, the unlikely hero. He has given you a short timer in order to deal with the bomb and, in essence, placed the lives of everyone around you in your hands. You know nothing about defusing bombs! Thankfully, your friend, whom is either standing right next to you or is on the phone somewhere, got a handy Bomb Defusing Manual in the mail instead of the Sears Catalog this month. Working together, I know you can save everyone! Probably! Don’t feel bad if you explode, but, you know, loss of innocent lives. 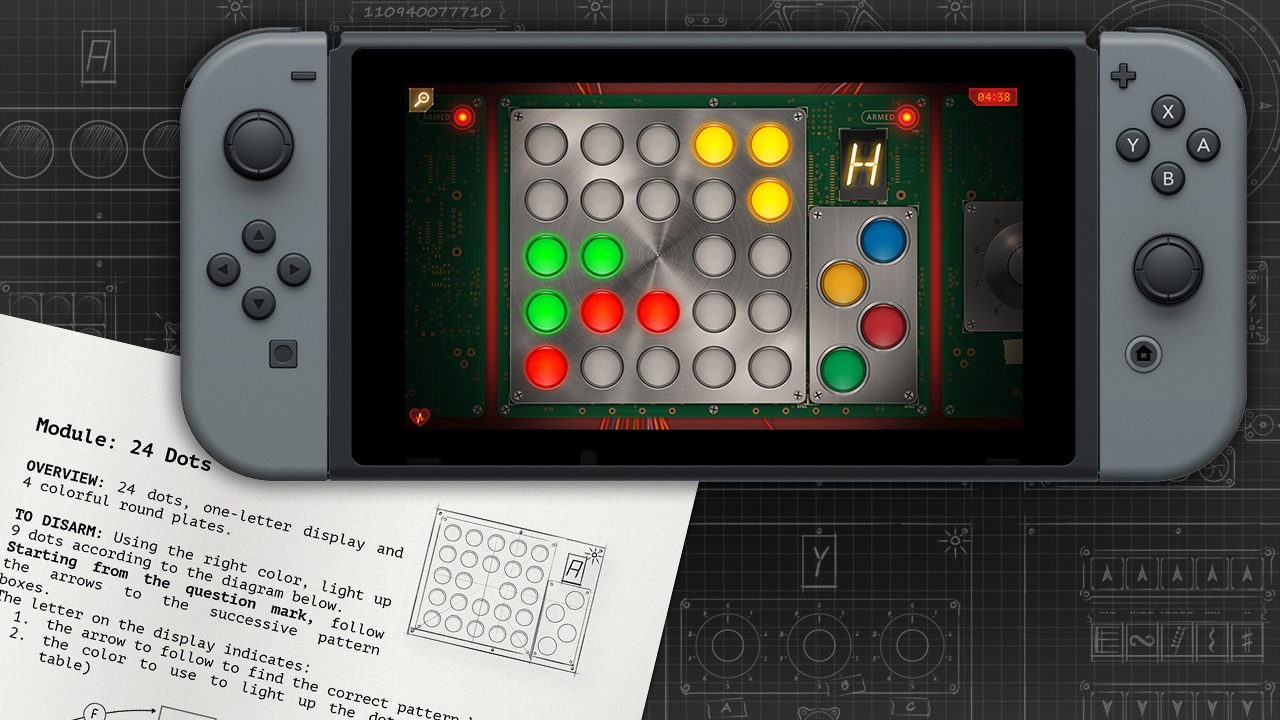 Them Bombs should be played with one person helming the Switch and another holding either a digital or real printed copy of the manual. I recommend printing,because it has the more dramatic effect of rifling through pages to look for clues. Each time, the bomb must be disarmed in a certain order: first the lights, then the switches, then the wires, etc. etc. The bombs will never be the same: you may have one that’s more complicated than another, or one that has a mechanism that you haven’t seen before. The manual, the exhaustive manual, covers every variable and gives you strict instructions on how to deal with each element. And, to the game’s credit, the elements are certainly interesting: there are possible patterns that the switches could form, and hints from the rest of the bomb can tell you what they would be. The lights have letters that flash on a display to tell you which to hit, but they’ll change depending on the remaining timer time. And, of course, the whole thing is very 24 with the countdown omnipresent and very apparent.

Them Bombs does a good job of balancing out the job need and priority for each of the roles. The defuser has the Switch the entire time, working touchscreen controls (no need for JoyCons) to figure out what needs to be done as instructed, and also keep the flashlight batteries charged so that you don’t lose track of things in the dark. The manual holders have their work cut out for them, making sure they get the correct information to the defuser as fast as possible, as correctly as possible, and without shouting over someone else. Multiple manual holders and defusers do make for a great party game because you end up all panicking together, working madly and trying to not accidentally shout out instructions before understanding everything the first time. You’ll quickly find out which of your friends is the jerk who likes to make impetuous decisions because they think they know what they’re doing. No matter how many times you’ve played it, there’s a great chance that you’ll end up with a variant to the bomb that you couldn’t have possibly memorized from before, and, as a result, death will come swiftly to the vain.

The good and bad point of Them Bombs is the way the game is handled by itself: multiplayer is a must, otherwise it’s nothing. I attempted to do a game of Them Bombs by myself, and I was successful, but it was worthless. By reading a manual and then doing what the manual said, I effectively turned Them Bombs into an awesome oil changing simulator, putting in work to do something I didn’t want to but ultimately had to. The frantic yelling and change of scenery is what makes the game work. It’s a party game, or even a drinking game, but it’s definitely not a solo adventure. 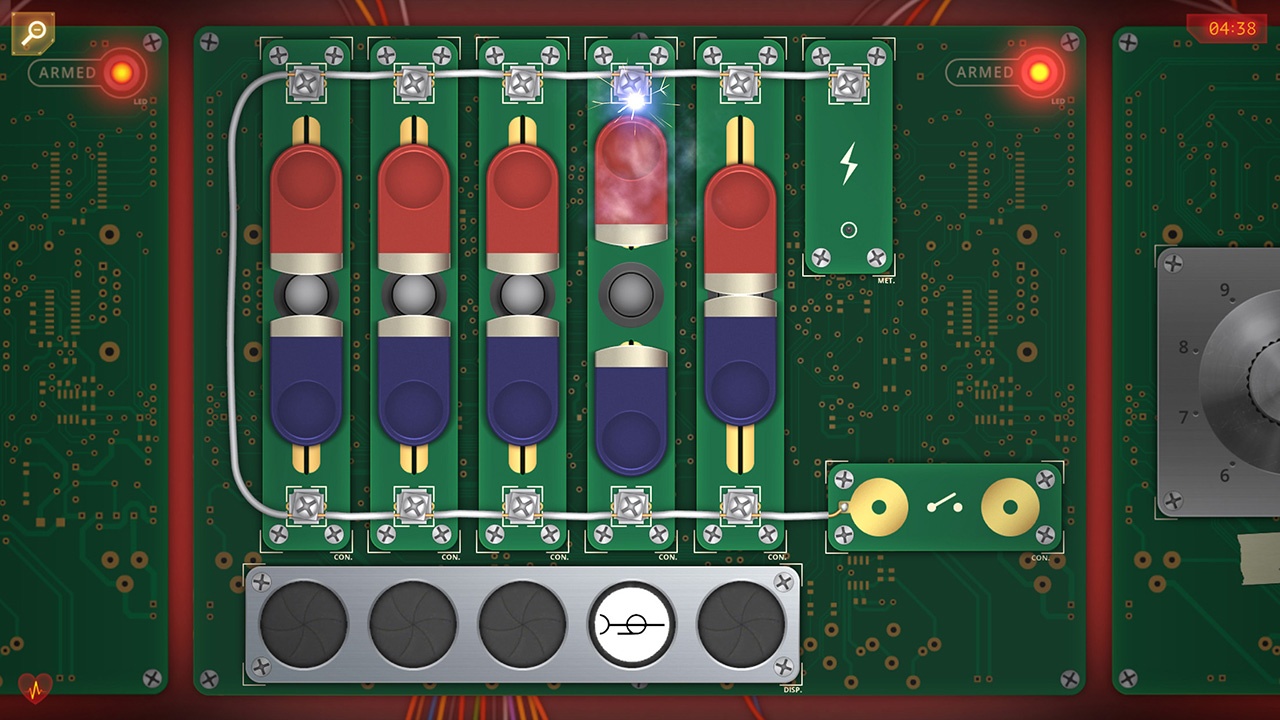 I can’t really complain about the graphics, because they do get the job done, but they seem very flat and standard compared to the other game. You know what other game I mean. The one that Them Bombs is clearly based on, even directly stolen from, that is, incidentally, coming to the Nintendo Switch later this summer. But here’s the whole thing: Them Bombs does a decent enough job that it’s been successful on iOS and Android, and that’s good enough, especially for a free app with some IAP. You can enjoy doing this for the price of free all day long and ignore some of the shortcomings. But it’s ten dollars on the eShop, and that makes you reconsider some things. Like how it does feel that some of the graphics are just lifted out of Unity and done with. Or that there’s nothing really incentivizing here other than it can be on the Switch, when this game already exists in other places. Or, again, the fact that it’s a two player game but one player is just holding the manual, not a controller.

Them Bombs is good enough for it’s price and appearance, and it does have a few good times in store. There doesn’t appear to be more coming or anything more to it than what you already see, so please consider how much you want to have a screaming experience with your friends and loved ones before downloading. For fans of the mobile version, this is the ad free, full featured deal, and it’s pretty good for the Switch. For fans of that other game, be patient: it’s coming, you can wait.