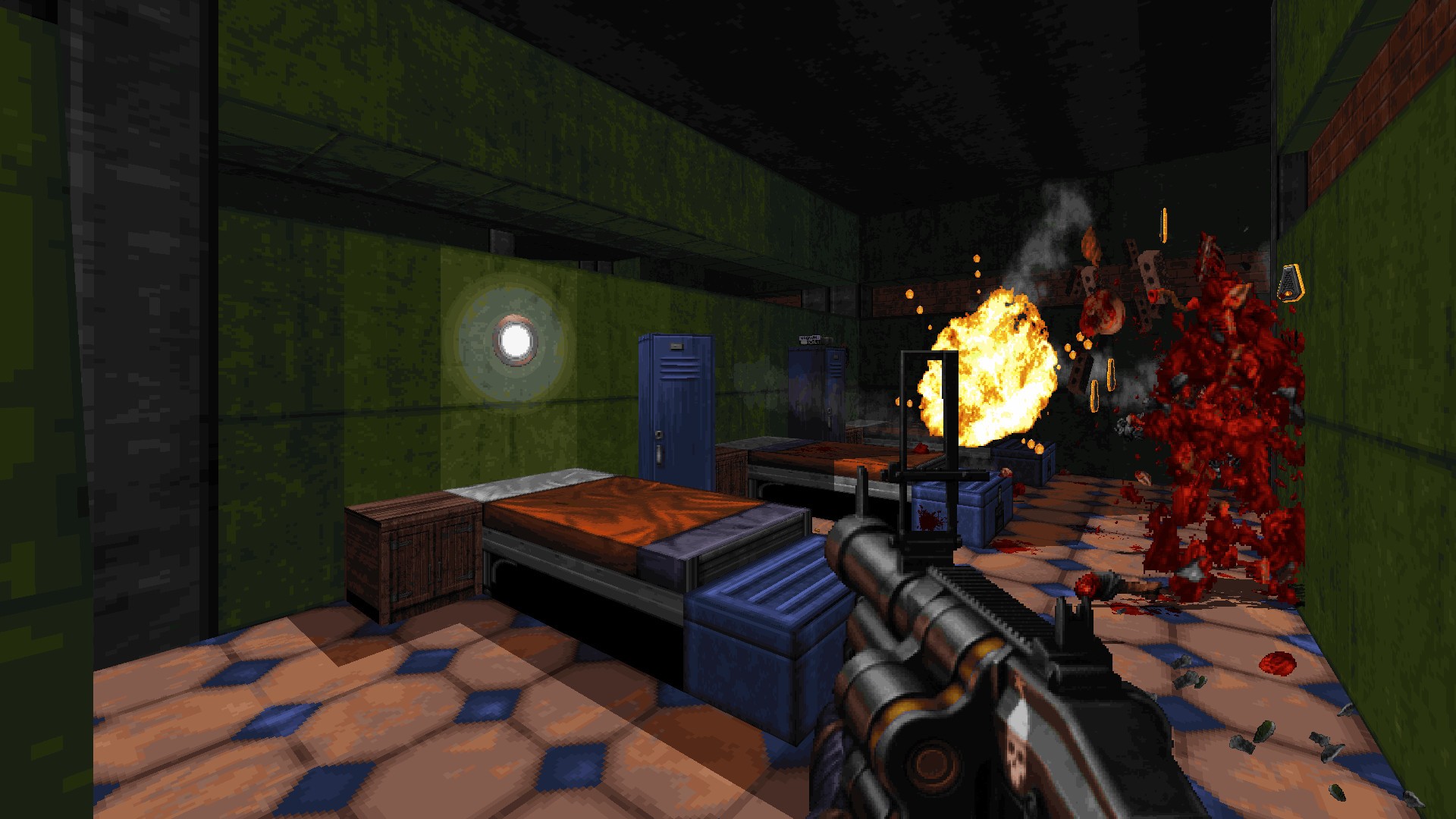 Anyone familiar with the first-person shooter genre will know their heritage when it comes to games like Wolfenstein and Doom. In the 90s, one of the more popular titles, particularly on PC, was Duke Nukem 3D and it was one of the best titles in the genre around, sharing the crown with other Doom variants and Quake. Now the genre goes back to these 90s roots with the release of Ion Fury on the Switch – 3D Realms, who were part of the aforementioned Duke Nukem 3D are involved once more.

Taking the role of Shelly “Bombshell” Harrison, you battle the evil mastermind Dr Jadus Heskel who has a legion of cybernetic cultists to do his bidding. Set in the futuristic city of Neo DC, Shelly sprints through the city wiping out any traces of these cyber grunts, performing the classic Doom side quests of locating keycards to access new areas. Ion Fury is no-nonsense, and while there’s a story present, the developers know that their audience is here for fast-paced action, and on that basis – it does not disappoint.

A first-person adventure, from the outset you take control of Shelly who seems to have had some sort of turbo thrusters installed in her shoes as this game is fast. Like, really fast. The same controls play out with any FPS, with the shoulder buttons for attack, a button for interaction, reload and the L button for crouch. The latter sounded a bit unusual as that’s usually reserved for grenades. Still, from my playing style, I crouch a lot during attacks, and on this basis, the button works out much better than say a Call of Duty mapping. Of course, you could always change the button layout. Speaking of which, the R3 button doesn’t work as a melee attack, but switches to your electric baton for when you run out of bullets. It, unfortunately, doesn’t do significant damage, but gets you out of a scrape and can also be used to charge power generators in the game. 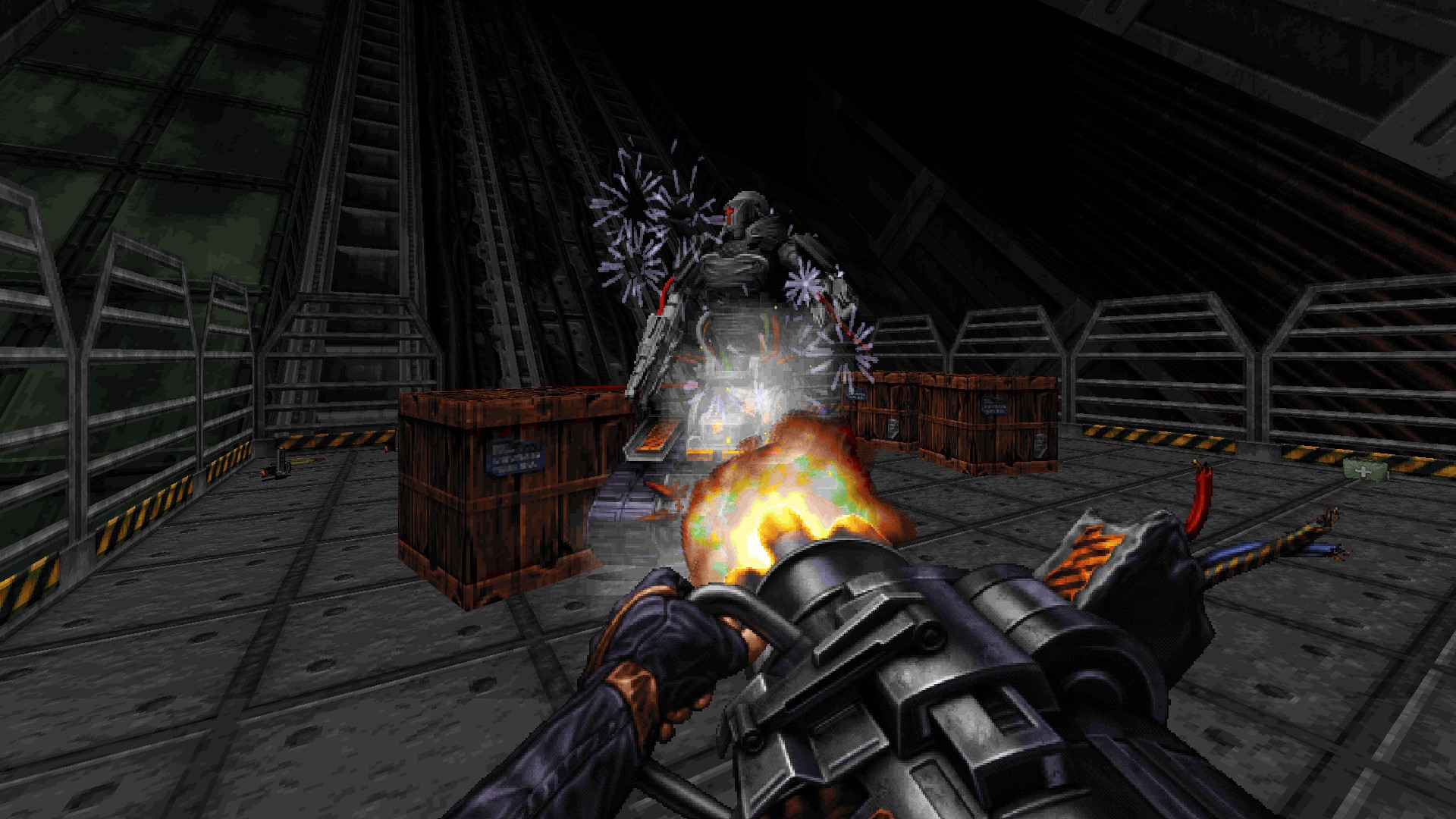 A melee attack in these older style games was usually the finishing move in a last-minute one-on-one, not like knife stealth attacks in a more modern title like the Killzone series. That said, the arsenal available in Ion Fury is insane. No over-the-top guns like Borderlands, but a significant difference in how they handle and their effects. Starting with a pistol, it’s serviceable but takes a couple of hits; then, of course, there’s the reload which slows thing down (all the reason to crouch or jump when avoiding attacks!). From memory, you get the shotgun in the first stage, and it has the same impact as when you get the gun in Doom: it’s fantastic. Though it’s not overpowered and makes the game easy, it makes it easier, and the satisfaction of close quarter carnage is incredibly satisfying. But just as you get used to it, or start running out of bullets, you get the incendiary submachine gun, and it just feels like Christmas.

The graphics and animation style in the game is incredibly dated. Still, if you’re reading this review in anticipation for whether the game is any good, you’ll have an idea on what to expect, and in that scenario, Ion Fury is ace. While other retro titles go for the pixel art effect, Ion Fury is dedicated to preserving the same graphics that had us 486 users picking their jaws off the table when the likes of Duke Nukem 3D or Half Life came out. These environments are so enjoyable and the epitome of what a decent deathmatch type game feels like – back in the heyday of LAN server games playing Quake on low settings to get maximum speed against your opponents to the tunes of Nine Inch Nails. Ion Fury has that same nostalgic feeling – not just because it brings back memories of the time, but more so because the gameplay was just so satisfying. 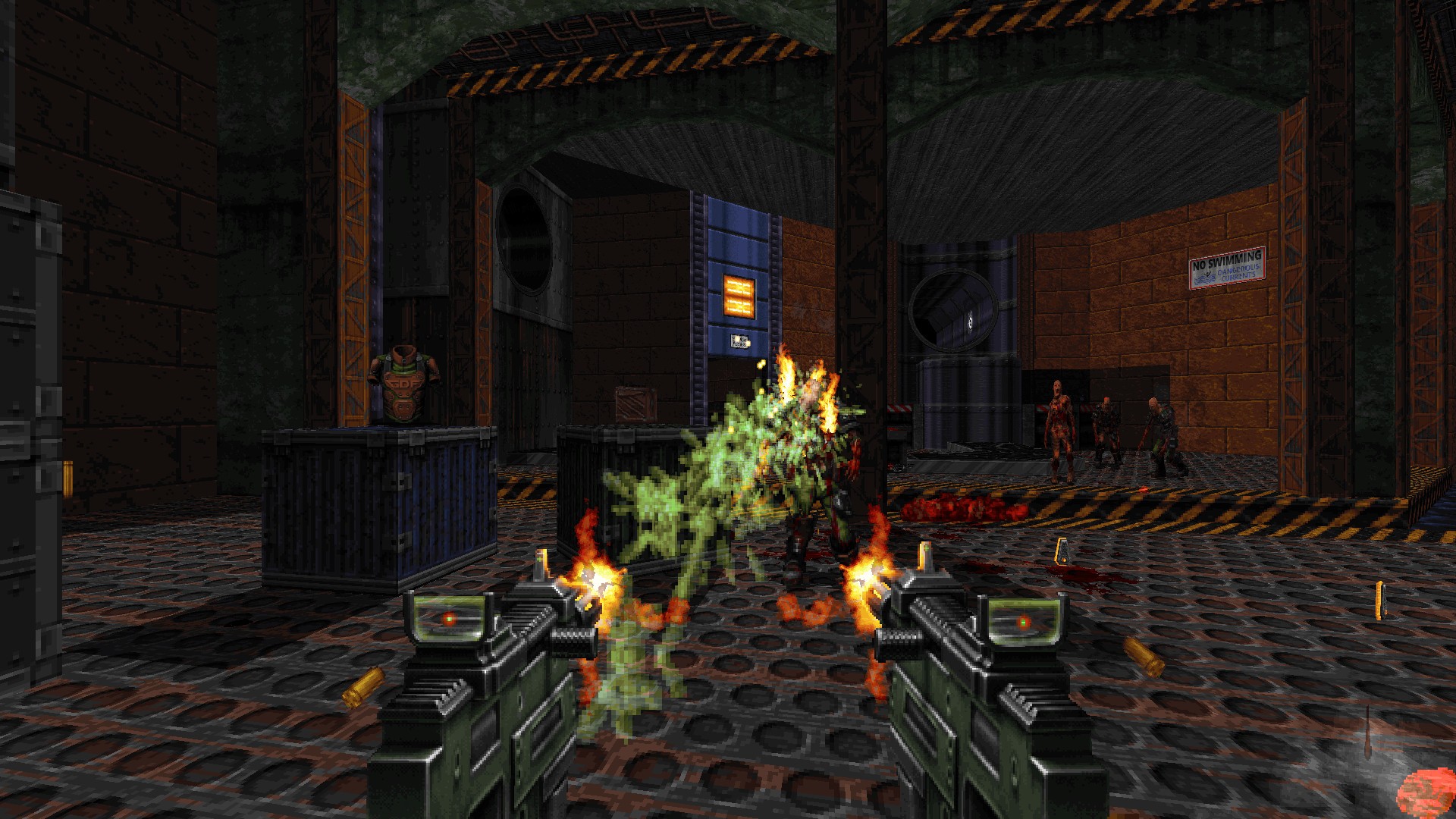 Ion Fury is very much a 90s style game, but 100% relevant in today’s market as it’s the fundamental gameplay that is just so good, that it begs to be played. That said, it’s not without its tongue-in-cheek humour and on and off commentary from Shelly, like a female version of Duke Nukem. Pick up a shotgun, and she talks about her boomstick, or comments on the shooting ability of the enemies, which to be fair, is hardly on par with a stormtrooper. Depending on what level you play, these guys don’t miss. Despite having played these games for decades, I still don’t have the guts to play on the hardest level. Well, of course, I have the guts, I just don’t have the skill. Thankfully there are four levels to choose from and the normal setting it just right for most gamers. Though it isn’t ‘god mode’, the easiest setting lacks the challenge and only there for people who want to finish the game quickly. I say quickly – it won’t be in one sitting, but you die significantly less.

Without a doubt, Ion Fury is a must-have shooter, but surely it has some flaws? Sure. If you don’t like the appearance, then you’re going to have to give it a miss but this isn’t a negative at all. My beef with the game was the classic backtracking; trying to find a keycard and remember where the door was then going back to find it when enemies respawn once more when you’re on your last legs. There aren’t any cheap trick corridors that you would get in something like Dark Forces, but there are more than enough hidden areas and ventilation systems to stomp through that will throw you off guard. Besides that, just as you’re about to complete an area, a notification will remind you that there are X secrets still to be found. Depending on your state of mind, that will drive you crazy, but locating these areas is hard work as they are properly hidden and all the more reason why there’s a lot of replay value in the game. It’s worth adding that there are also bonus missions with the game too, but remember that it’s strictly a one-player game unless there’s a future update.

Ion Fury takes all the best things about the FPS genre and, well, displays them all here. There aren’t any lavish set-pieces, loot or levelling up but old-school handmade stages, hyperspeed action and with a likeable protagonist that needs future sagas. A must-have title for old-school shooters.