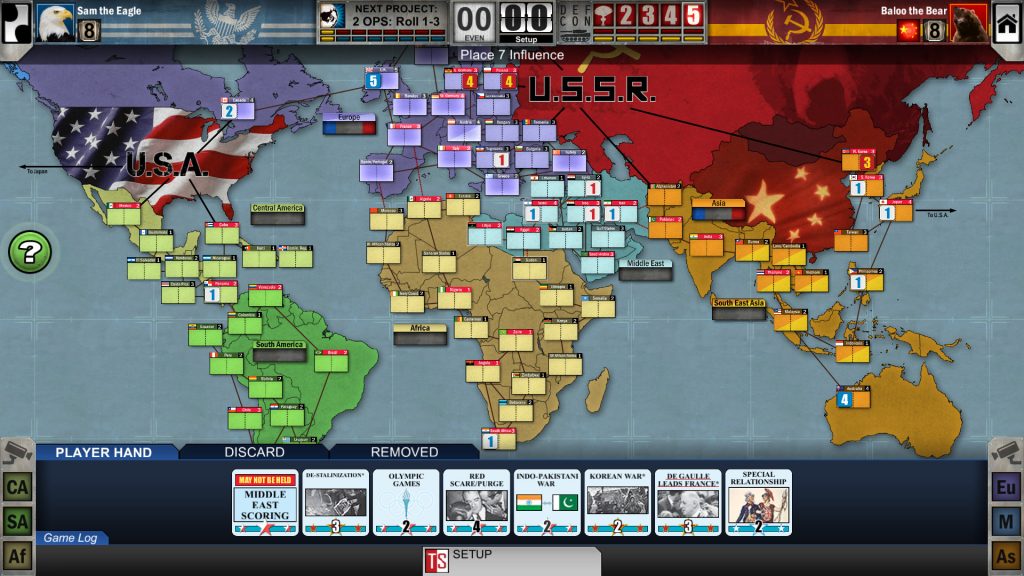 As a lover of all board games, but having never played Twilight Struggle, I’ve been extremely curious about Playdek’s digital release of the game for some time now. Of most interest to me was undoubtedly how well the developers could translate the tension and intrigue of a game like this into a digital medium that will almost always consisted of wars waged against either the AI or opponents hundreds and thousands of miles away.

I needn’t have worried however, because whilst the game does obviously lack some of the banter that comes from looking your opponent in the eye whilst you attempt to outmanoeuvred them, that loss is far outweighed by the gain of having access to thousands of players worldwide. And I mustn’t forget the ever willing and reasonably capable AI, either. A key reason why I’ve never invested in the paper version of Twilight Struggle (aside from the insane price tag) is the fact that it’s a relatively complex game that has few visual elements that would enable me to entice my friends into playing. Both of these things are covered in the Playdek version however, because the game features both an excellent tutorial and a simple, pleasing and slick user interface.

Twilight Struggle is a two player game set in the Cold War era, that pits the opposing players as the superpowers of the USA and the USSR. Each round, a hand of cards is dealt to both players from their respective decks, and over the course of the following turns, they must be played in one of a number of ways as most suits the given situation on board. Not all cards are beneficial to the player that holds them however, and one of the most fundamental strategies in Twilight Struggle is the ability to control when and how those cards influence the board, in addition to driving your own grand plan to completion. 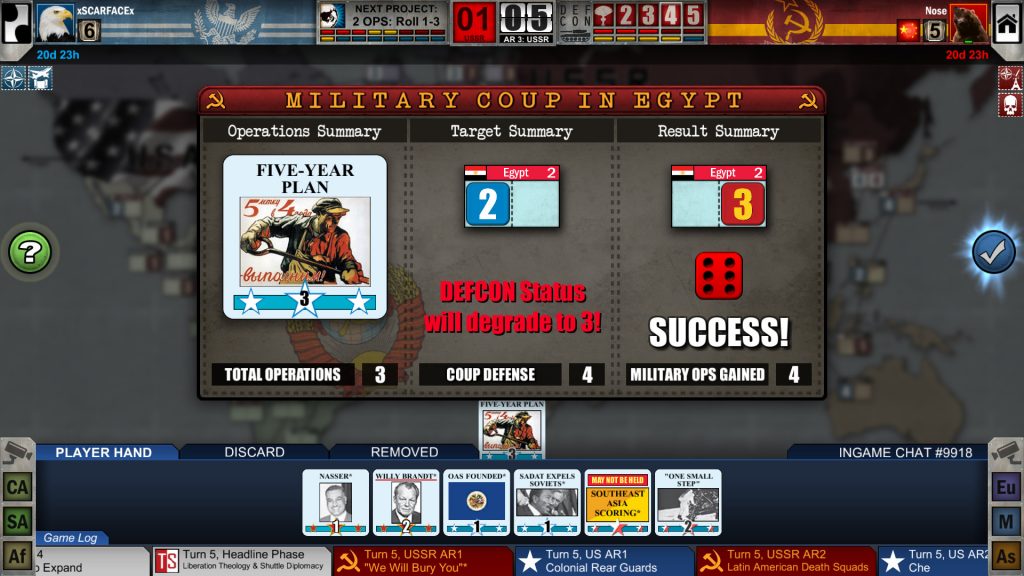 At the end of each round, some of these cards are shuffled back into the deck before a new hand is drawn for the next round, whilst others (usually the more powerful cards that relate to specific events in history) are removed, and not reused. This structure means that the momentum from one round (and even one turn) to the next can shift dramatically, and although balance is not guaranteed, it is highly likely because even if you have a bad round and your opponent has a good one, things are likely to swing back during the next.

So what do you actually do to win in Twilight Struggle? Well, this is a game first and foremost about maintaining political control over as wide an area possible, whilst at the same time using coups and event cards to gain control of particular locations via military means. A space race victory is also a potential option, and Twilight Struggle provides multiple ways to use each card to advance each of these aims, which all forms part of the strategy around how to manage those cards that benefit the opponent. Dice are rolled to influence the outcome of most of these events, but it takes a very bad roll of the dice to undo a better strategy, so the outcome never feels as if it is derived from luck.

In multiplayer, Twilight Struggle ranges from stupidly easy when playing a complete newcomer, to brutally hard when you play a seasoned veteran. Ultimately though, it is a relatively easy game to pick up and become competitive in, even though the nuances take a long time to really get the hang of. The single player AI is fine, and easily comparable to an average human. Like an average human however, it does lack the strategic vision to play a long game over the course of multiple rounds. 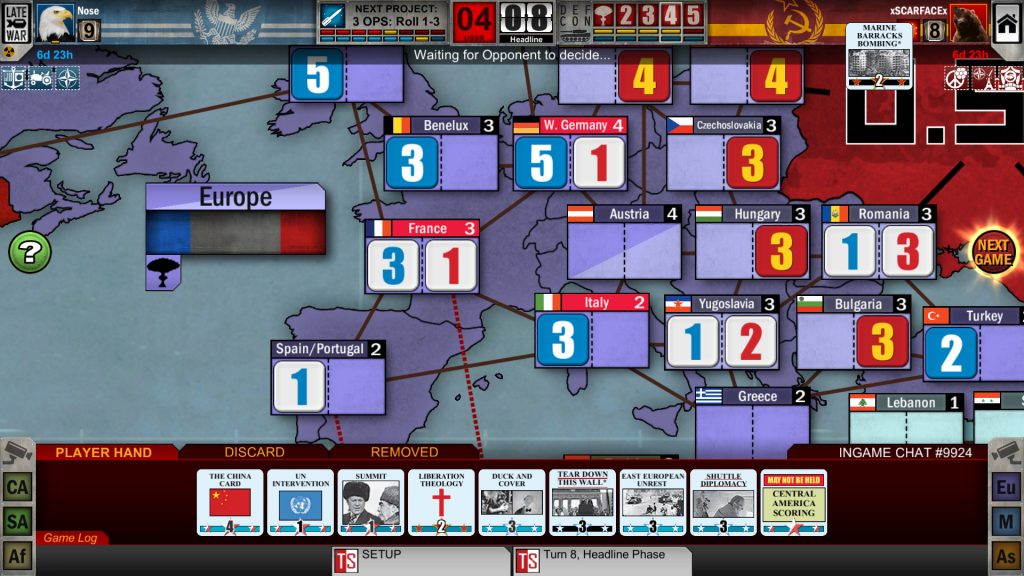 Twilight Struggle is good, but it’s not perfect. If I have one main criticism, it is the fact that currently, the game can only be played in a windowed mode that cannot be enlarged or adjusted much for resolution. On a small, high-resolution screen such as the laptop I use for this kind of game, it can be quite hard to see what’s happening on the board. Other criticisms include the fact that multiplayer games are long, and only a pair of committed players (of which there are plenty) will ever complete them, but nevertheless you’ll need at least an hour set aside.

As a board game conversion then, Twilight Struggle succeeds in delivering a faithful, relatively slick digital experience wrapped up in a mostly pleasing user interface. Aside from the resolution and windowed mode, it has few (if any flaws) that are not directly related to the board game upon which it was fashioned, and at the relatively low price of entry compared to the board game, it is something of a bargain. I wouldn’t hesitate to recommend Twilight Struggle to fans of the board game, fans of board games in general or those who are interested in the Cold War subject matter. For those not interested in the above however, it’s well worth thinking twice about what you would get out of a game like this, because the answer could easily be nothing.