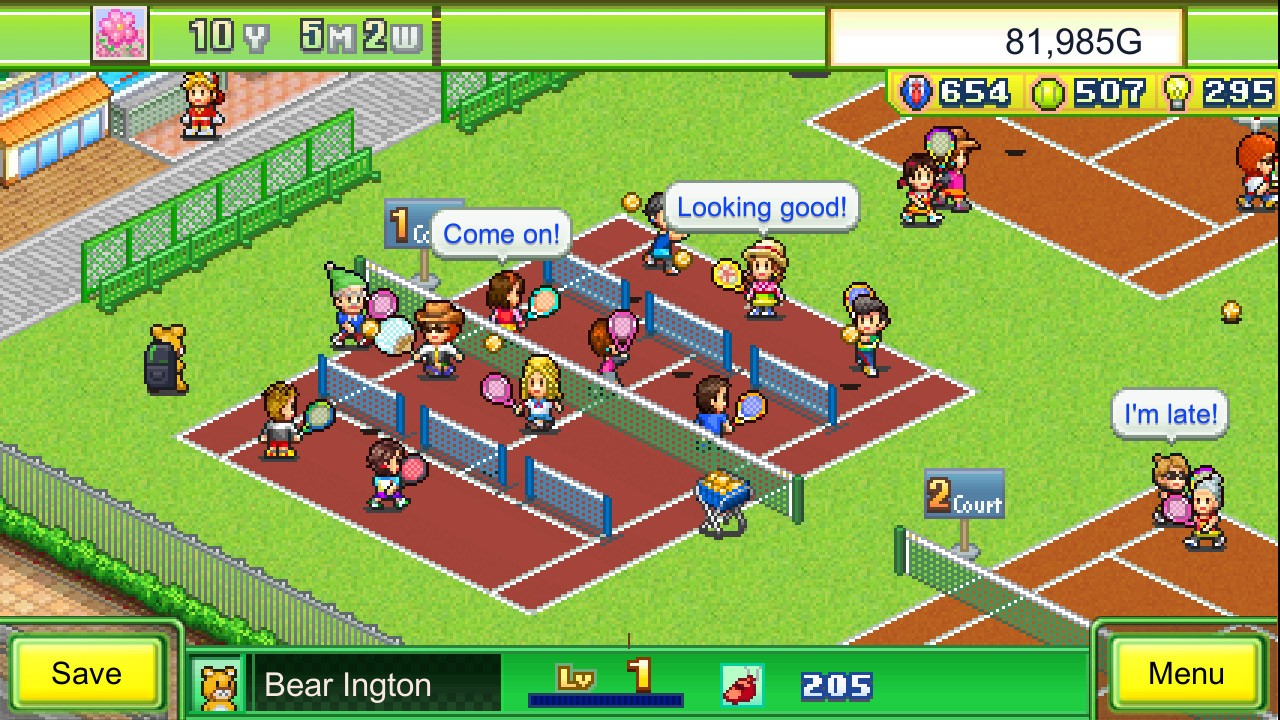 I’ve loved Kairosoft games since I was a kid. The Japanese developer has been pumping out simulation games for PC and mobile since the 90’s, with a number of their titles being gradually brought to the Nintendo Switch. As you can expect, with a developer churning out what you could describe as re-skinned versions of the same base game, some are better than the others. This is one of the others. I’ve only played these on mobile before and, for any positives you can find with this specific title, it just doesn’t seem to translate to a success on a home console.

Featuring their trademark retro cartoon graphics, the latest Switch port comes in the form of Tennis Club Story which, as you could’ve guessed, sees you set up a tennis school for aspiring players with the aim of building the club up from a small team of two, to leaders on and off the court.

You do this by recruiting new players and coaches, expanding your club and facilities in the process, and training your team up to be the best they can through a range of different mini-games and quick time events. Once you feel you’re ready you can take your team out on to the tennis court where, by winning matches and tournaments, you gain publicity and move up the world rankings. It’s easy to get to grips with too, with each new mechanic or feature being introduced with a brief tutorial at a steady pace – you don’t ever feel overloaded. 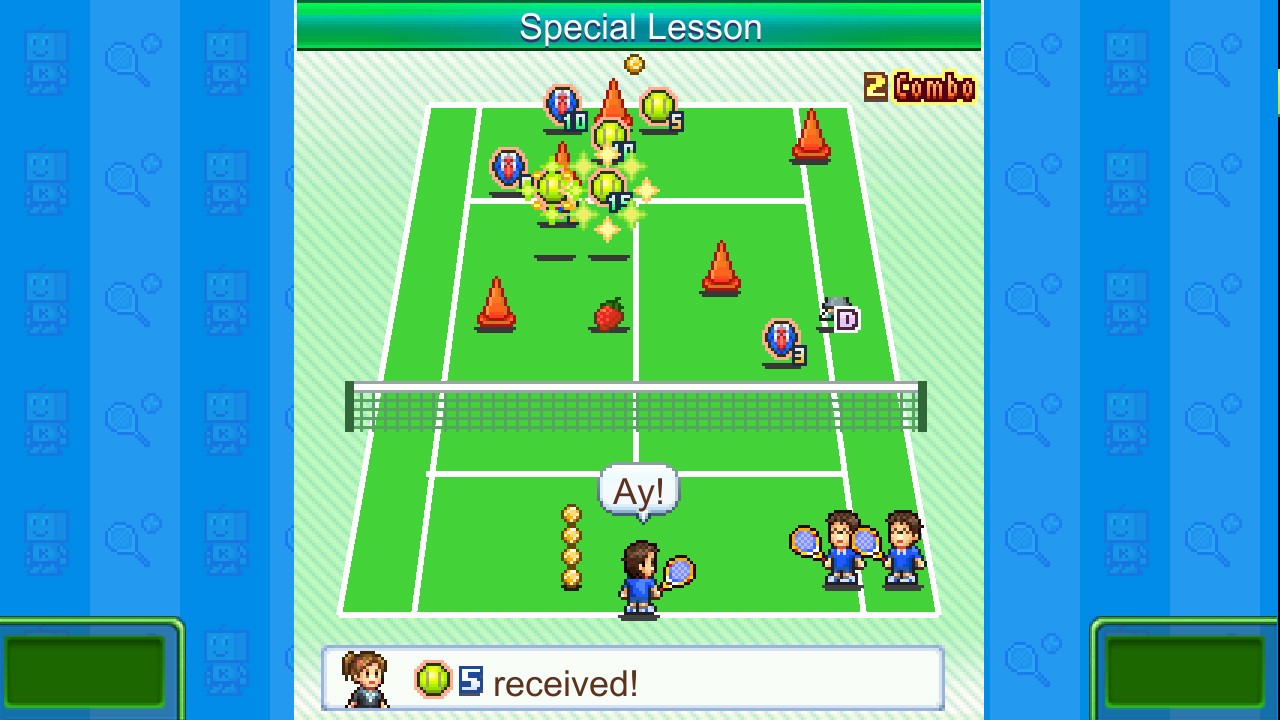 The issues come with the transition to the Switch. The controls, for instance, are quite obscure in some cases although fairly manageable once you’ve got used to it. Navigating around the screen and menus, also, would be far easier on a touch screen. As a genre, I find simulation or management games like this tend to suit playing for a short period of time that doesn’t compute with having to set up a console to play for a few hours.

But these aren’t the only issues. The game plays fairly slowly through a barrage of on-screen pop ups that you need to cycle through. It’s frustratingly slow and the matches get tiresome very quickly. You don’t play them, which of course you would expect in a management sim, but your only input is by choosing one of four game tactics that seem to have a very limited effect. Coupled with the inability to speed up these matches, you end up willing the game to up the ante. And this is only more than evident at the beginning of your tennis club story where the game is insanely easy, whilst it helps as a tutorial it takes too long to get up to speed and actually challenge you. 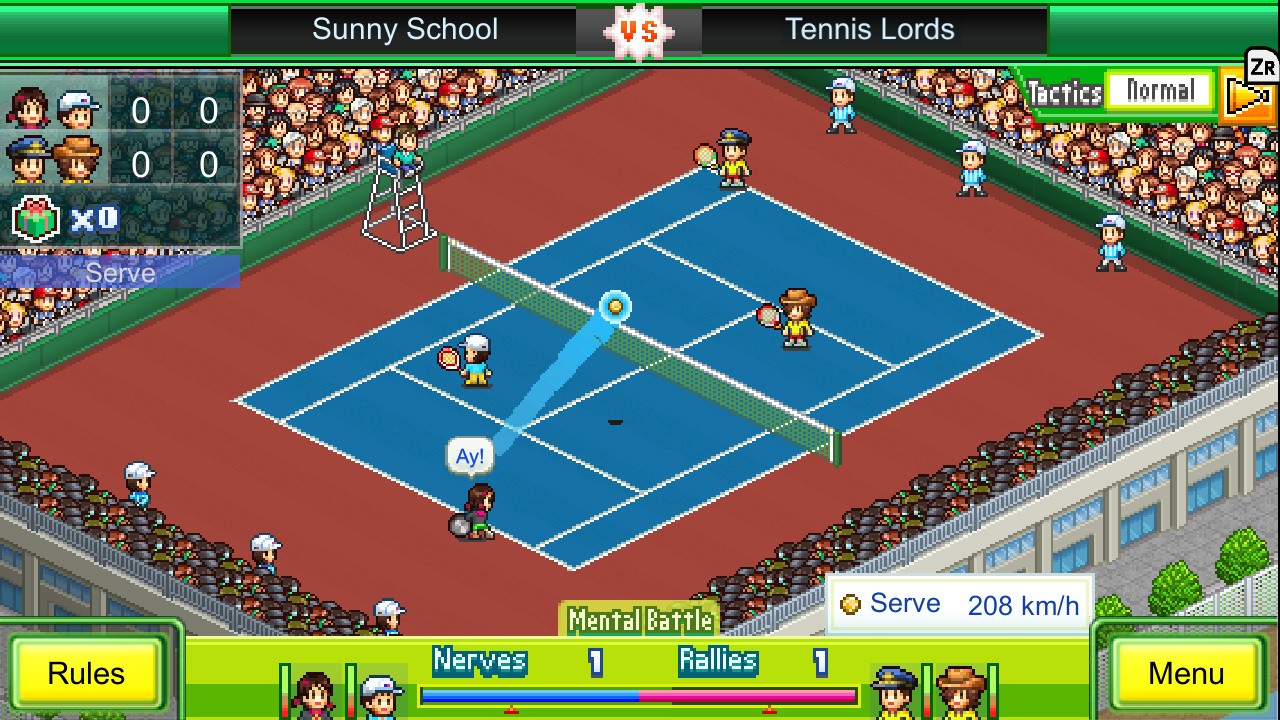 All of this makes the idea of going back and starting again a real drag. You could go back, yes, restarting your club and trying things differently but I don’t think you’d have a different experience at all. Despite it being a management sim the game comes across very linear, with the actions you take almost pre-determined and guided by set in-game events. There’s very few options or different pathways you can take.

Of the many Kairosoft developed games I’ve played, they really excel where you can customise your game experience and try out different ways of doing things – take Game Dev Story or Pocket Academy for example – something you just don’t get when you take over your brand new tennis club. It’s not one of the strongest titles they’ve produced by a long shot, but the main issue is how it translates to consoles. It just doesn’t suit the Switch. I’d happily play this on my phone for 5 or 10 minutes at a time, although I’d admittedly end up deleting it within a few days, but for £11.50 you’re just not getting value for money.

Too easy and gives you limited options in how you play – one of Kairosoft’s weakest titles.