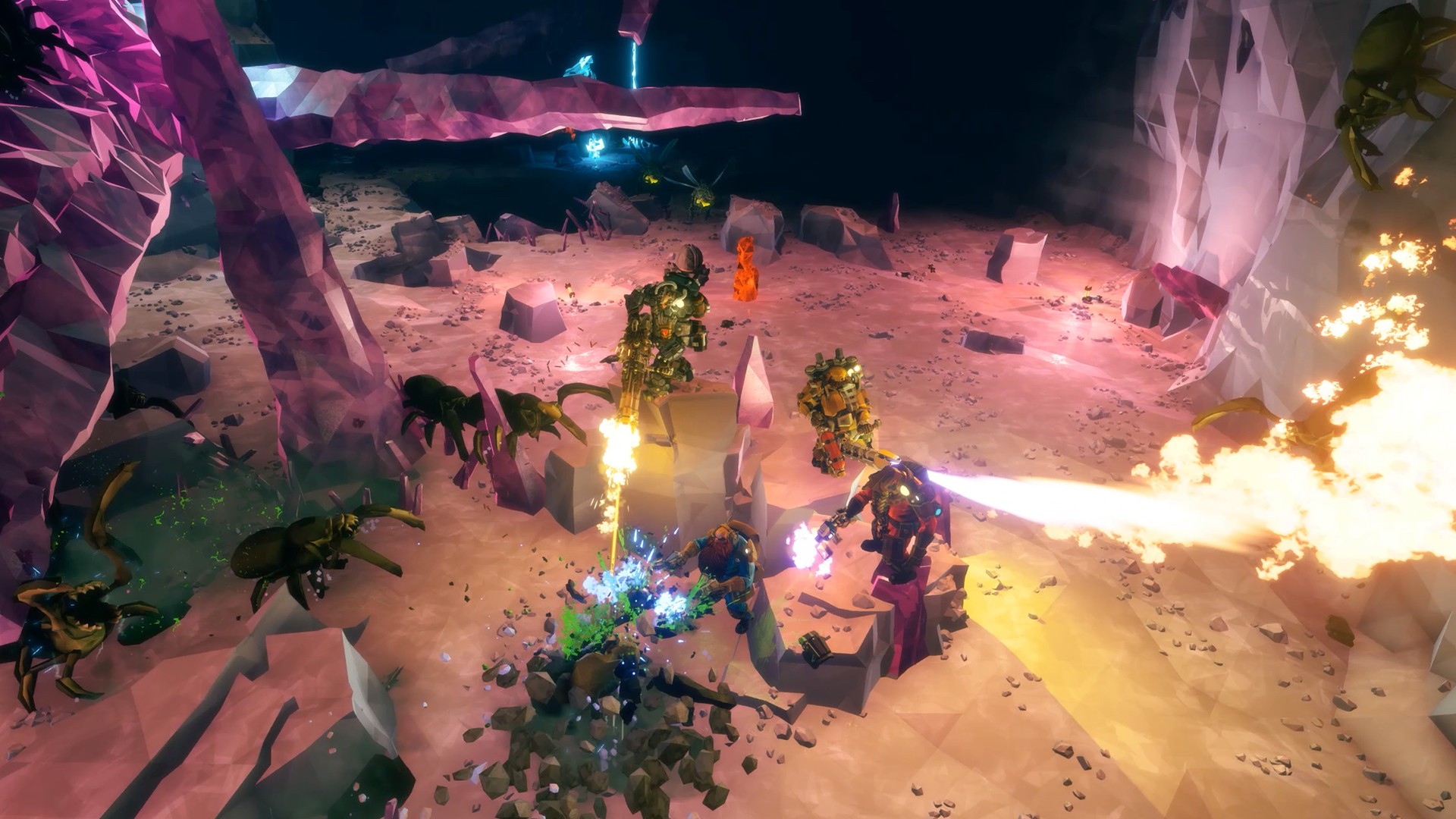 Life as a dwarf must be pretty sweet. You get to drink all the time, cussing is socially acceptable, the shorter and fatter you are, the better it is, and massive bushy beards show wisdom and maturity. Now imagine how much better dwarf life would be if you were a galactic space dwarf who spends their time floating around, killing aliens, and gathering rare minerals. Time to imagine no more, as Ghost Ship Games has made this dream a reality in Deep Rock Galactic. Published by Coffee Stain Publishing, this Co-Op first person shooter has you controlling one of four Dwarves while you explore the dark caves of Hoxxes IV.

This procedurally generated cave diving FPS allows you to play solo, or team up with 3 other players. Once you have decided which team you wish to work with, you must select your character and weapon setup from the Spacerig. If you, like me spend most of the time playing on your own, then you’ll be accompanied by a robot named Bosco. He will follow orders to mine resources, attack enemies, and revive you when the time comes. If you team up with real people, each character that is chosen will complement the others, and a balanced team will fly through a mission fairly easily. You can choose between; The Engineer, he’s the utility player with a shotgun. The Gunner, he’s the master of the firefight, mowing down enemies with his minigun. The Driller, he’s utilised to burn through hard rock, and resources, his flamethrower heats things up pretty nicely. Finally The Scout, the king of reconnaissance, his assault rifle is powerful enough to keep him out of trouble. Each has their own positives and negatives, but combining the 4 together makes an almost unstoppable force. Each is provided with a pickaxe, so everyone is expected to pull their own weight when it comes to searching out the gold.

You might be thinking, “What is the point of playing a game about mining? That doesn’t sound fun!” Fortunately Deep Rock Galactic isn’t all about hunting through deep caves just to find resources. Before you land on the planet you are given the option to select a mission; Stealing alien eggs, eliminate targets, mine specific minerals, and retrieving lost equipment. Completion of these tasks will earn you credit and XP. You are also given the chance to complete a secondary mission, this usually consists of Hunting out items, or obtaining a secondary resource. All minerals that are collected must be deposited in your M.U.L.E, it’s effectively a giant storage box on wheels, and only items that are placed in it will count towards the mission total. Once you’ve finished your quest you will call for your drop pod to return you back to the spacerig. The Path to escape is dangerous, dark and timed. 5 minutes are all you have to make it to the exit point. The M.U.L.E must also escape, what’s the point in working so hard, if all you are going to do is leave behind your precious loot? I absolutely loved the escape; Crawling through dark tunnels, throwing down flares to desperately light the way, and mowing down enemies like a hot knife through butter. You better hope that your team is on the same page as you, there is nothing worse than being swarmed by the Glyphids, while “Jimmy” big beard is just mopping up a vein of gold. You scream down the microphone “What the heck are you doing Jimmy?” Jimmy is a gold loving dwarf, so he just laughs at you, and keeps mining, I know I shouldn’t have played with randoms, I rue my luck and just keep shooting. 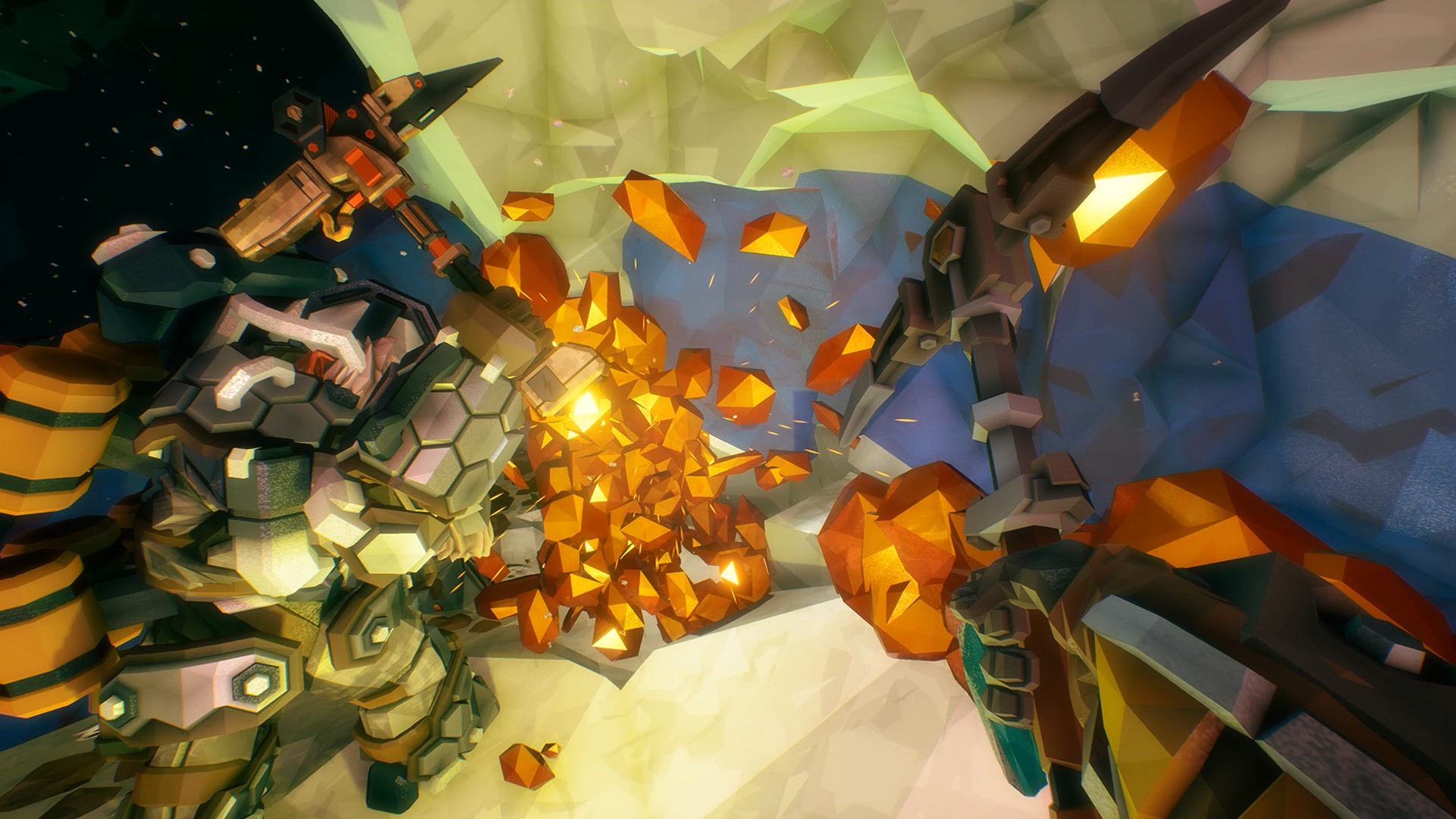 I’ll be the first to admit that I was ready to quit this after a couple of hours. I couldn’t get into the flow, I didn’t really get the concept, and playing solo just seemed slow and lonely. This game comes to life when you have a crowd of friends to play with. It’s remarkable how much of a difference it can make to the gameplay. Everything is a lot harder with a big crowd, but it all feels so much smoother and easier. Each player shares the load, and swarms of the main antagonists the arachnids known as the Glyphids are manageable, as long as everyone works together. Once you’ve broken the back of what to do, then solo mode with the robot isn’t so much of a chore, if anything the slower pace can be refreshing, and the lack of reliance on other players can take the pressure off also. Whether you are going to take this on in a group or on your own, the landscapes will be as dangerous for you either way. Several biomes with be discovered in your search for gold and rare minerals. You may find yourself crunching through a salt mine, crushing rocks with your pickaxe, and lighting the darkened areas with basic flares. Or the land may be a hazardous mess, and you must venture through radioactive tunnels, knowing that the risk to your existence is exponentially higher than normal. Either way, you must survive, complete your task and get home, someone needs to drink the beer in the space bar, and if it isn’t you, then someone else will have to do it.

Having looked at a number of reviews I noted the plaudits that claim that Deep Rock Galactic is similar to both Minecraft and Left 4 Dead. An odd combination I thought, but having played it, I can see why they are both mentioned. The ability to destroy the world around you, to find resources, and forge your own path feels very much like Minecraft. The screaming hordes of aliens that appear and want to bite, spit, and generally dismember you feels very much like Left 4 Dead. Two big franchises, with very different concepts, influencing a new FPS title was always going to be a risk. Ghost Ship Games have done well to ensure their concept is unique and well balanced. With character customisation and weapon and ability upgrades earned through credits obtained, it doesn’t just feel like a First Person Shooter, but also has some key RPG elements to it. XP shows your overall standing with the company you work for, but each dwarf will level at their own pace, so ensure you practise with all of them, as you never know which will be more useful for any of the tasks thrown at you.

With the majority of the time spent down a dark tunnel, or exploring caves, you might be concerned that the whole game is going to be a claustrophobic mess of greys, and low ceilings. Though it would be fair to say you do feel very confined, and it can get quite tight when playing with a full team, the majority of the time it feels spacious. The freedom to destroy the environment allows you to feel at one with your surroundings. I always wanted to explore, and I never just felt like a passenger passing through. The use of light and shade created fantastic depth, making each mission feel and look massive. The details presented on each character model and piece of equipment was in depth and exquisite. Whenever I play games with multiple characters who have to work together in close spaces I worry that the animation is going to be bitty and rubber band all of the time, similar to my experiences I’ve had in both Ark and Atlas. Deep Rock Galactic has none of this, it’s utterly flawless, and puts other recently out of Early Access titles to shame. The variety of attacks from enemies encountered keeps the action fresh. The flow of the swarm attacks, and no frame rate drops make this an extremely enjoyable title to play and look at.

With so much going on, you might now be concerned that the audio will suffer, it will be an unbearable mess. Again, no. Every sound effect is clear and audible, the explosions have a hearty depth to them, the clang of metal on metal as you hunt through dirt and ore sets an industrious tone. The ear piercing screams of aliens grouping together, gathering ready to attack fills you with fear and dread. As tasks are started and completed they are accompanied by witty one liners, now these worked well, but after you have heard them for the one hundredth time, they got a little annoying. The upbeat pace of the music inspires you to work harder and faster, to go out of your comfort zone and explore further and deeper into the cave network. All in all the audio works brilliantly. It creates an excellent atmosphere which conveys the Sci Fi theme perfectly. 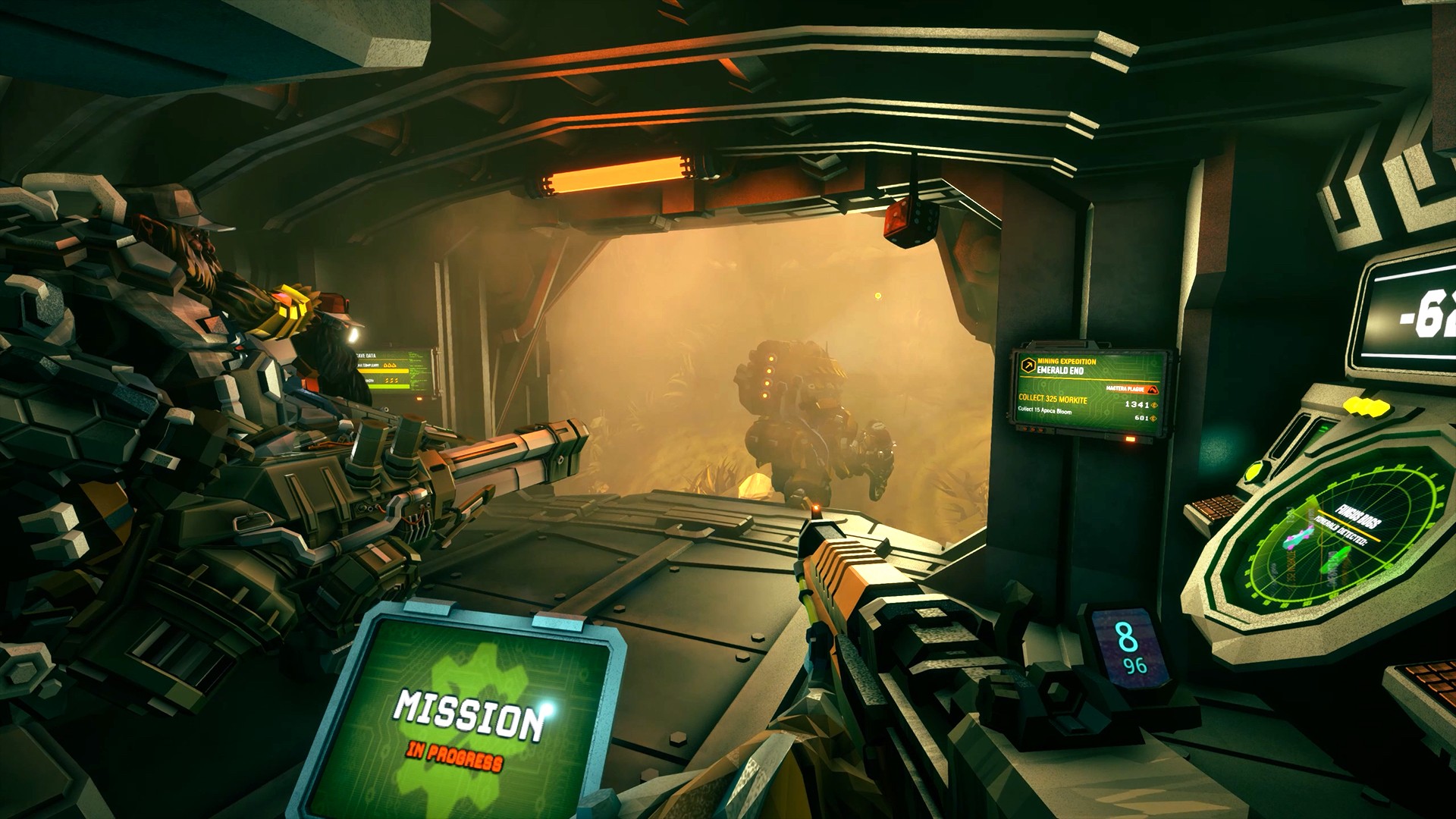 Having been ported from the PC after its Early Access start, I was always going to be concerned that the control system was going to be quite complex and tough to master. For me, this certainly was the case. Now, everything is mapped out clearly, an early in game tutorial helps to explain everything concisely, however, there are still an awful lot of options. Maybe, just maybe, this is a me issue, and you won’t be affected. I just found that with a different equipment layout to select from for each of the Dwarves, I was just pressing the wrong buttons repeatedly. Maybe with more practise I’ll get to grips with it, in the mean time I’ll just have to put up with my team mates screaming at me for being a “Noob”.

You will discover a large selection of missions that take around 30 minutes to complete. Weapons and ability upgrades, and vast procedurally generated caves systems are available to explore in this FPS adventure, mix this with the opportunity to play solo, with friends, or random people, and you have the recipe for a title that will keep calling you back for more. With hours upon hours of gameplay available, and a tough achievement list that demands teamwork and co-operation, this one is proving to be great value for money. If you have a good group of friends to play with, then I personally think that you’ll get more enjoyment out of the game. After all, I’m usually a lone wolf, and I certainly had more fun playing in a pack than on my own.

Deep Rock Galactic started as a very slow burner for me. I was willing to put it to bed, without really giving it a chance. I recommend that if you struggle to start with, then try and mix things up, it’ll be worth it. It’s a treat for the senses with both Audio and Visual elements working overtime to please its fan base. Having spent a relatively short period of time in Early Access, its port to console has been a resounding success, with one minor gripe being the complexity of the controls. I’m going all out with the recommendation for this. Its eclectic mix of big franchise games, and absurd Dwarven characters makes this a charming and enjoyable success. Grow your beard, grab your pick and get that gold. You’ll be the richest and most successful dwarf in space.

What could possible go wrong with drunken Dwarves in space? Grab your pickaxe, search the caves, and see for yourself!