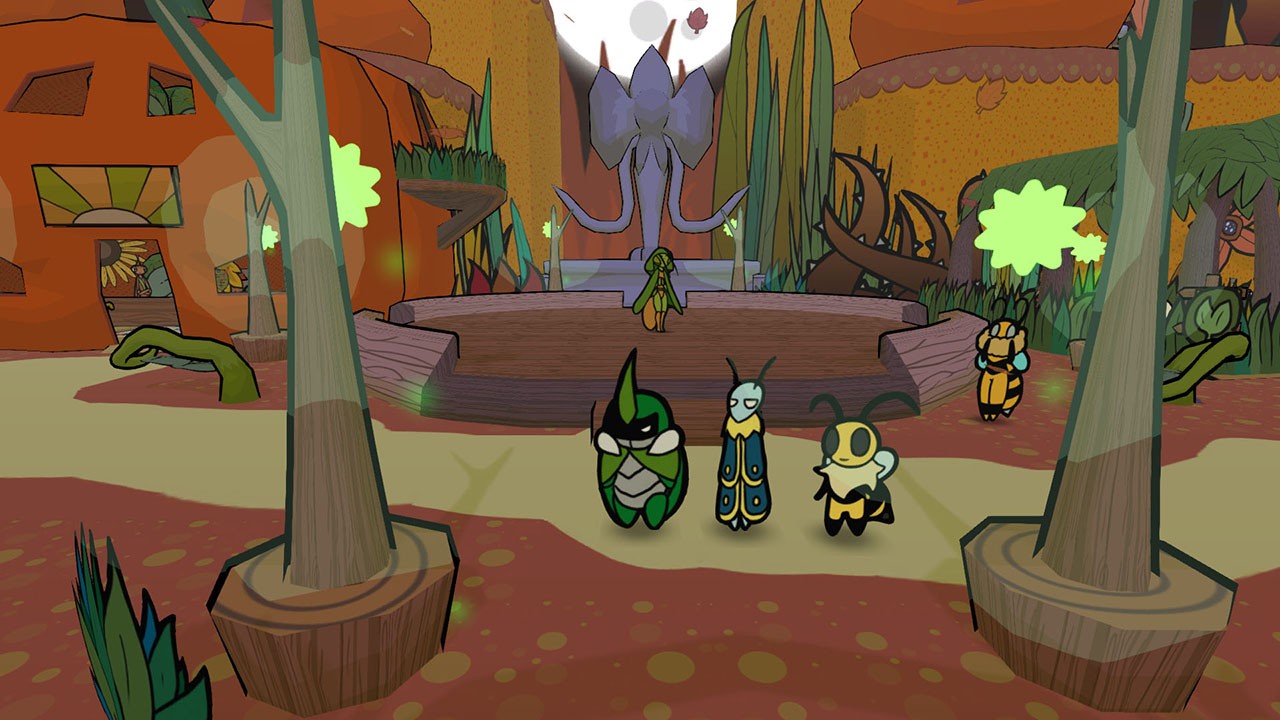 Bug Fables: The Everlasting Sapling is a reminder not to judge a book by its cover. While, graphically speaking, this bug-themed adventure to discover a magical artefact won’t wow you, there’s so much to like here. Let’s start with its obvious inspiration: Paper Mario. The world of Bugaria is presented in 3 dimensions and the characters themselves are 1-dimensional—like paper; combat is turn based, using mini games that rely on timing to decide how effective your attack/defence is; each character in your team of three has a special ability outside of combat that will help you solve puzzles and explore the world; the writing is often tongue-in-cheek, focusing on the camaraderie between the members of your exploration team. In short, Bug Fables: The Everlasting Sapling has all the makings of a great game—but does it deliver without being a carbon copy? The short answer is yes. If you’ve made it this far into the review and you’re loving what you’ve read, then it’s safe to say you’ll enjoy what Bug Fables: The Everlasting Sapling has to offer. For the longer, more detailed answer, read on.

This adventure begins with the founding of an exploration team for the queen, who seeks the titular Everlasting Sapling which is said to grant one with immortality. Team members Vi, a bee, and Kabbu, a beetle, don’t hit it off right away, but teaming up is really just a matter of convenience for two individuals who can’t proceed otherwise. Middle middle middle and your rookie team does what others have failed to: you discover an artefact in the dreaded Snakemouth Den and escape with it, your life, and the amnesiac moth by the name of Leif. So begins the real adventure to go to the furthest reaches of Bugaria, discovering artefacts, recovering Leif’s memories, and learning the truth behind the machinations of Queen Elizant II.

Character dialogue aside, the bulk of gameplay in Bug Fables: The Everlasting Sapling consists of puzzle platforming sections and combat. Puzzles range from pathing puzzles, requiring you to manipulate objects in order to create a clear route from point A to point B, to door puzzles which, as the name suggests, requires you to open a door to proceed and usually involves solving other puzzles or battling enemies in order to hit a switch. There was never a time I felt stumped, as all puzzles were able to be solved after some consideration. If I ever did need a hint, tapping the touch pad would encourage Kabbu to say something contextually helpful. 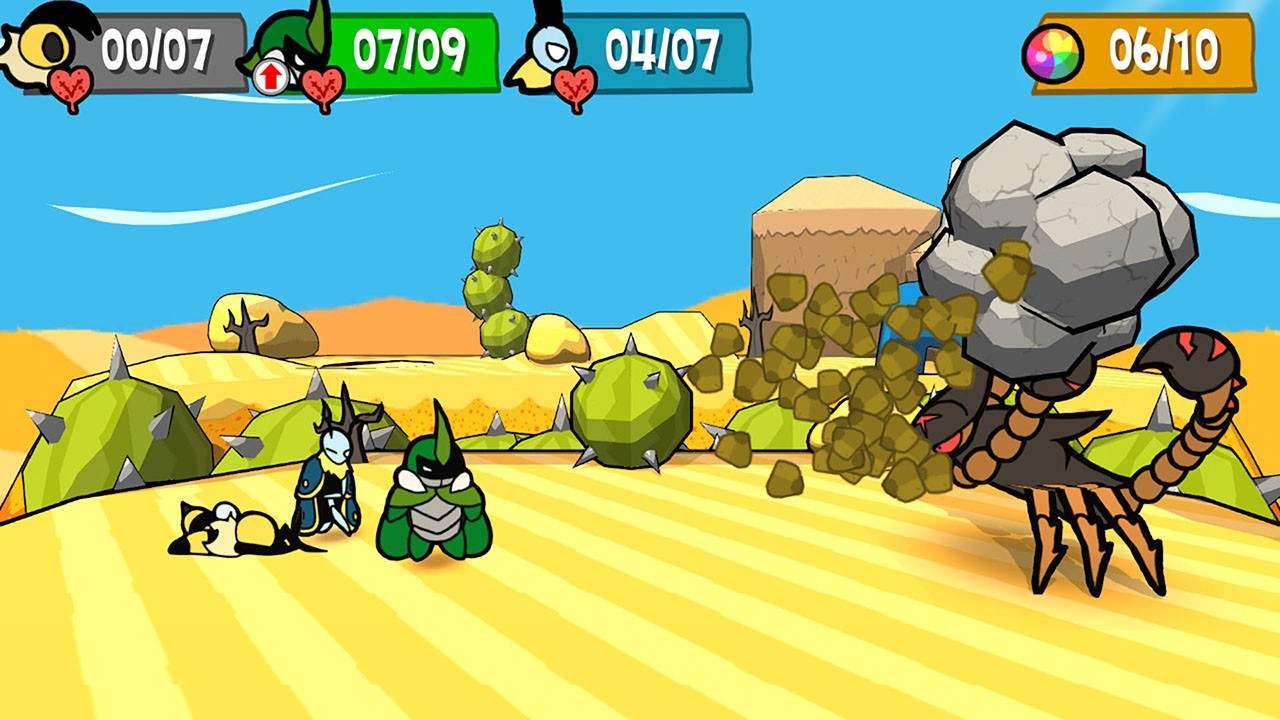 Combat is your standard turn-based affair. With no initiative stat or the like, your turn order is dictated by which party hits the other first. If the enemy gets the drop on you, they attack first. If you manage to strike an enemy and ambush them, your team attacks first with the benefit of your lead character getting to attack twice. Enemies have gimmicks. The weevil, for example, will suck the blood of its allies and heal itself, so it should be dealt with first; armoured foes, like inichas, must be flipped over by Kabbu’s horn before it will take damage from your teammates; midges have a pack mentality and will attack you when an ally is attacked. Thus, enemies require you to use your team members’ strengths accordingly. Kabbu is your tank, Vi is your glass cannon, and Leif is your spell slinger. Each has a standard attack which requires you to follow button prompts. Kabbu, for example, has you holding down on the D-Pad for a period of time and releasing at the moment indicated results in dealing more damage, whereas missing your cue means a less effective strike. Characters also have Skills, which use a shared Team Point (or TP) pool and introduce more complex mini games. I enjoy this style of combat as it always keeps you on your toes versus simply hammering X to keep selecting the same attack functions as I’ve sometimes done in other RPGs. Your characters can’t guard, so to speak, but you can press X at the appropriate time just before an enemy attacks to mitigate damage. Every enemy has a cadence of attacks, meaning you’ll have to learn them if you want to keep your teammates in fighting shape. You can heal using items via the item menu, but your inventory is limited.

For additional strategical measures, there’s Turn Relay and the Tactics menu. Turn Relay allows you to transfer one character’s turn to another, enabling that character to act twice at the expense of attack damage. In the tactics menu, you’ll find the ability to spy, run away, and do nothing. While the last two are self explanatory, it’s worth noting that the stronger the enemy fled, the more currency you’ll leave behind you. With the spy ability, you can discern the enemies health stat as well as how many you’ve seen versus how many you’ve defeated. The character performing spy will also give a helpful hint as to how to best approach a particular enemy, making this an invaluable resource against unfamiliar foes.

Winning battles rewards you with experience points, which in turn raises your team rank. Levelling up your team rank grants you the chance to choose a skill to improve—HP, TP, or MP—which affects all members of your team. As you gain team ranks, your members also learn new combat abilities. Levelling up completely heals your team, meaning a well-timed level up can be the difference between completing an area.

Party management in Bug Fables: The Everlasting Sapling boils down to medals with which Paper Mario fans will already be familiar. Your party members share Medal Points (MP) which dictates how many medals you can equip. Medals have a host of different effects from increasing stats to affecting the rates if status ailments. 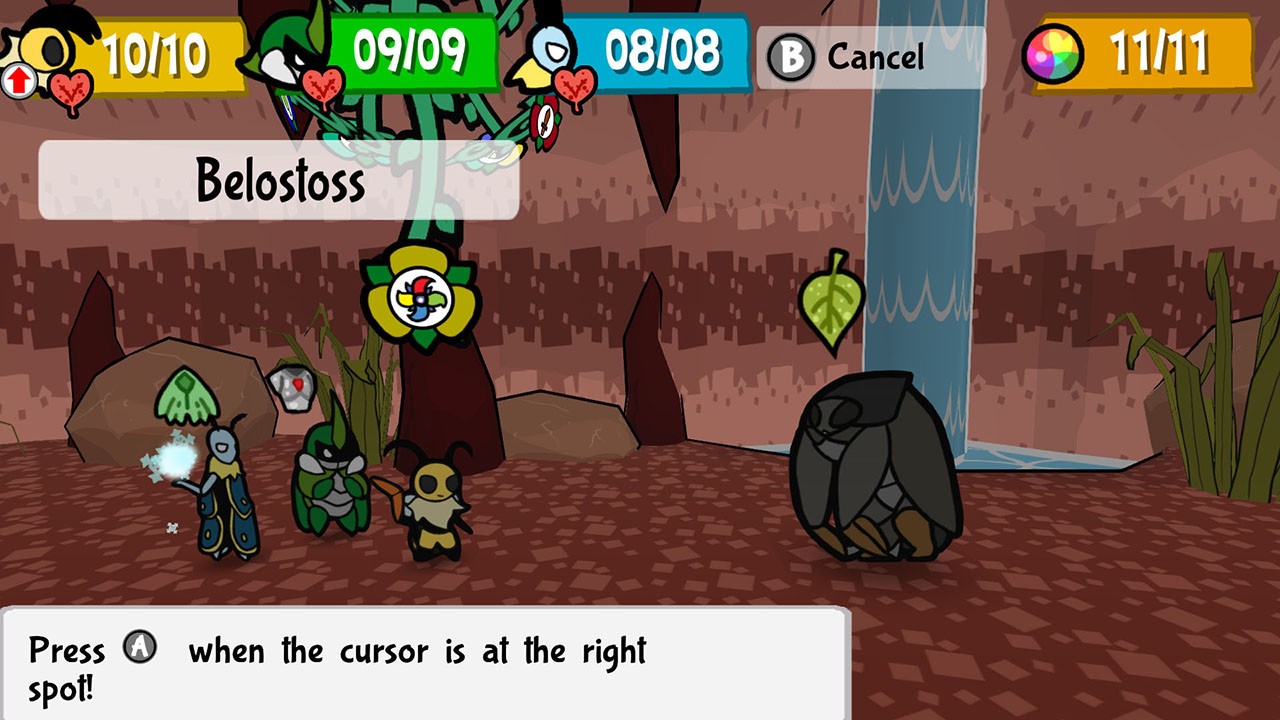 For the adventurer looking to experience all he can in the world of Bugaria, there’s also quests and discoveries. Discoveries are tidbits about Bugaria gleaned from interacting with objects and talking to other bugs and can be traded into the right person for rewards. By taking on quests from quest boards located in settlements, you’re able to help fellow bug kind and get rewarded in the process. Side quests are a staple in any RPG and these run the gauntlet from simple fetch quests to multi-step affairs that must be done over the course of your journey. Settlements also have shops where you can buy medals and and healing and combat items, banks where you can store excess berries and gain a nominal interest rate for time spent in game, storage where you can stash your excess items, and chefs who can take one or two of your raw items and make them into a culinary masterpiece.

Bugaria is a living, breathing world and thematically sound. Resident bugs live in fear of rain in their homes made of upside down mugs and cardboard boxes. The queen lives in a grand ant hill castle and the world’s fast travel is a system of tunnels dug by ants. The currency is berry-based and healing items are honey, leaves, etc. The soundtrack is also quite good, wrapping this heartwarming adventure in a nice little bow.

.Bottom Line.
I can wholeheartedly recommend Bug Fables: The Everlasting Sapling to anyone who enjoys turn based RPGs and platformers—but especially to those looking for their next Paper Mario fix. There’s very little fault to be found in this tale of friendship, mystical artifacts, and intriguing amnesiacs and I’ve enjoyed my time with it greatly. With just an additional coat of polish, I think this could be an instant classic found in any gamer’s library.

The world needs more Paper Mario and Bug Fables: The Everlasting Sapling is a worthwhile substitute while we await Nintendo’s next masterpiece.

Likeable cast.
Engaging combat.
Unique, fleshed out world and story.
Rewards for finding out more about the world via discoveries, encouraging exploration.

Not the best looking title.
Mini game timing can be challenging to learn.