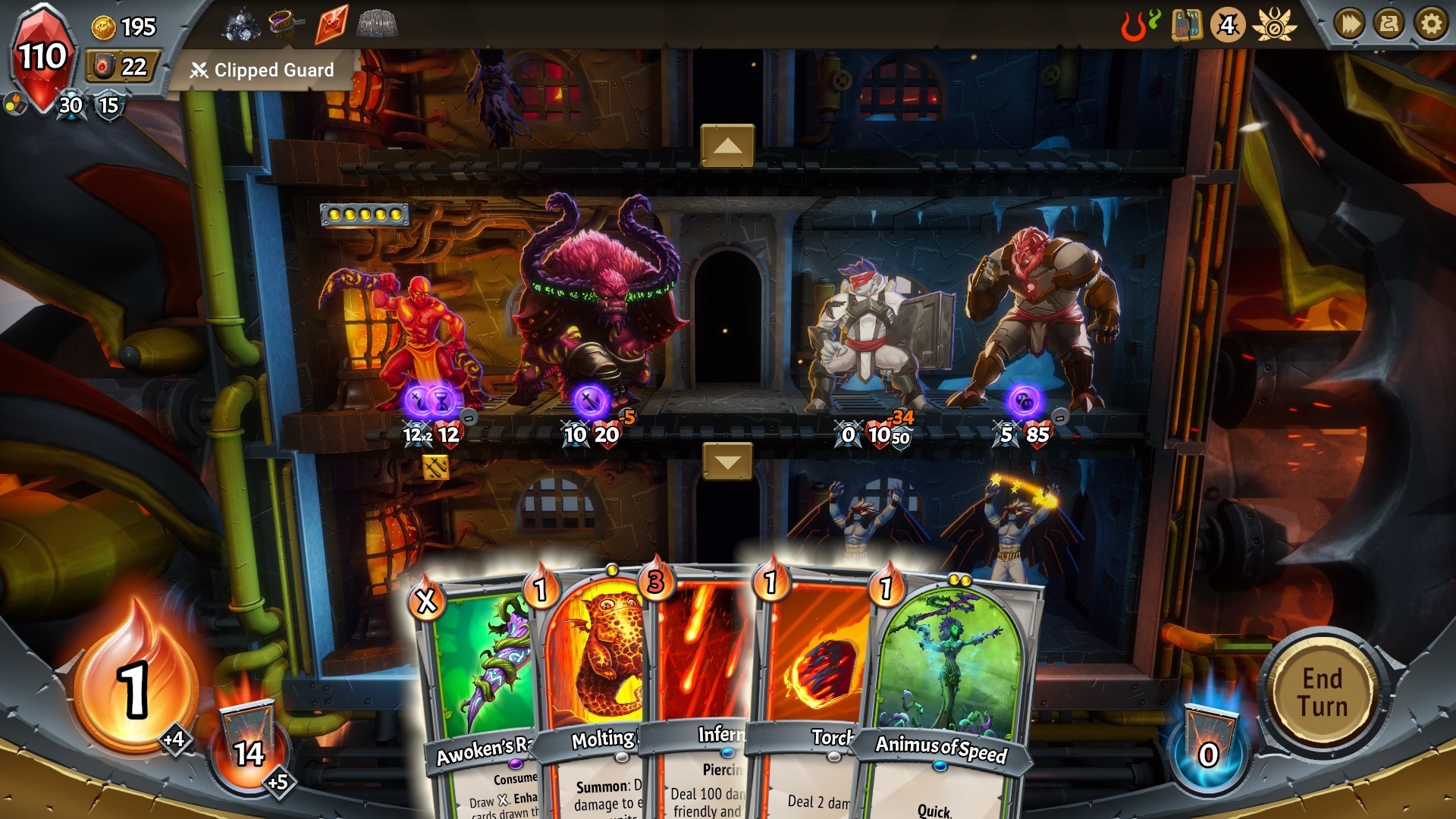 Monster Train is a deckbuilding dungeon crawler that takes place on a moving train. Hell has frozen, and so the mission to reignite Hell’s inferno falls on the player’s shoulders, as they travel through the 9 Circles of Hell while protecting the last burning pyre from the armies of Heaven.

Monster Train plays exactly like a card-game (with the obvious comparison being Slay the Spire), but its structure follows the lines of many dungeon crawlers, roguelikes, and roguelites that have popped up in recent years. With that said, Monster Train’s gameplay features some unique ideas and twists, which not only put it in a unique place within the genre, but they also make it one of best deck-building games of its type, ever.

Like any card-game, on each turn, you’re given a random set of cards from your deck that you can use, ranging from spells and units, with each costing a certain amount of points (ember) to use. Unused points don’t carry over, so you have to make do with what you have on each turn in order to deal with whatever kind of threat you’re facing. 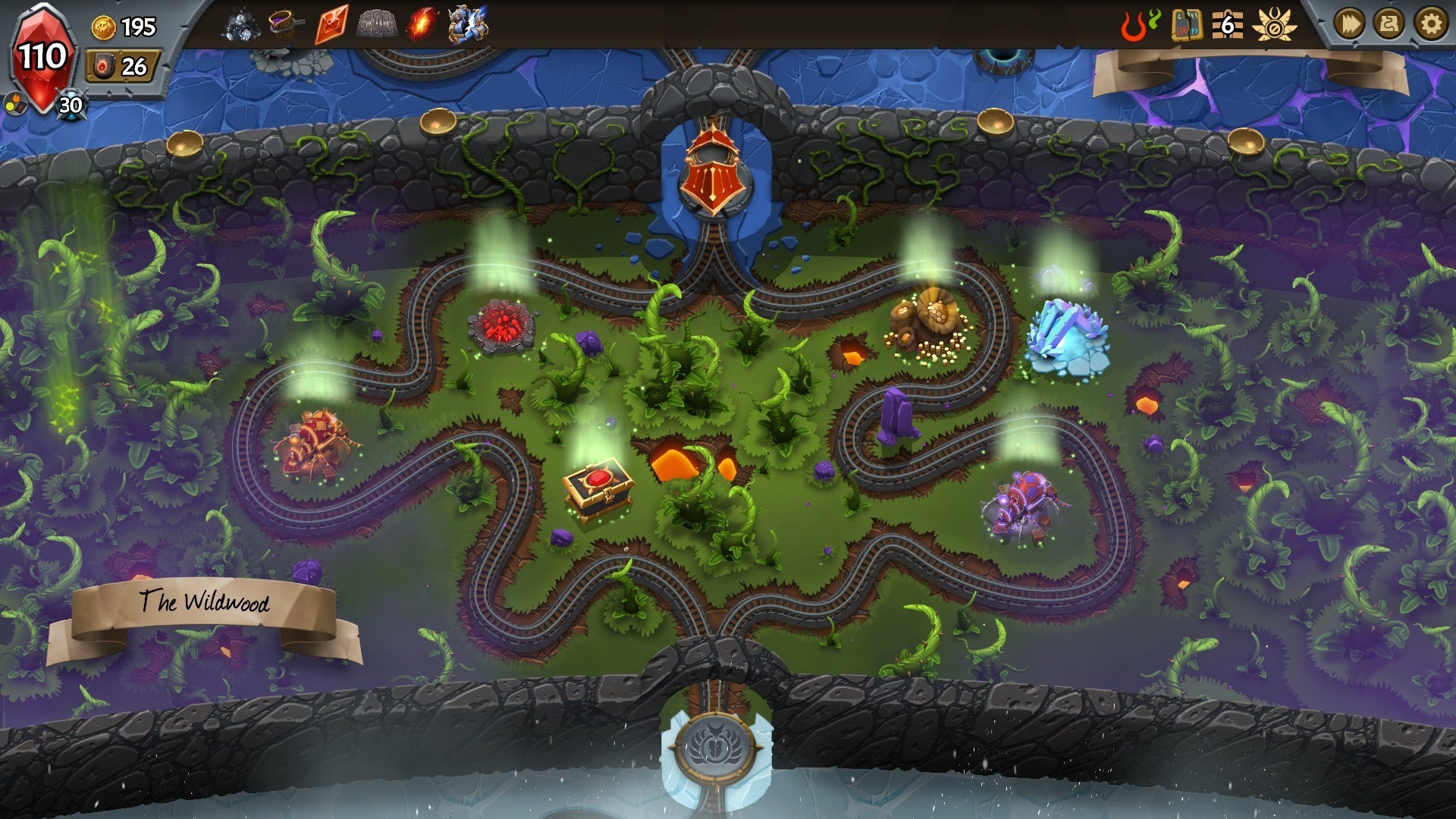 The objective of the game is to protect your pyre, which is located on the 4th floor of your train, if enemies destroy your pyre, it’s game over. In each fight, enemies will board your train on the first floor, and they will move on to the next floor after each turn. Now, each floor can only fit so many units in it, with bigger and more powerful units taking more space than lesser ones, and although there are ways to lower the space cost of units, it still is something that players need to keep an eye on when deploying their minions throughout the various floors, as you should try to get rid of enemies as quickly as possible because once a turn ends they will just move on to the next floor and your units can’t follow them.

While each run is independent on its own, Monster Train still has a progression system. As you play the game, you will gain points depending on your performance, and after each run, those points are automatically used to level up different clans and thus unlock new units, spells, and artefacts, from said clans. While initially you only have access to two clans, the Hellhorned and the Awoken, you will later gain access to three other clans, with each of them providing a different set of cards that focus on a specific gameplay style that can complement each other in numerous ways. For instance, while the Hellhorned deck focuses on dealing damage directly, either through sheer unit strength or spells, the Awoken deck is more focused on healing and dealing damage through indirect means. Speaking of which, artefacts are items that grant you some sort of passive bonus throughout an entire run, and these can either be bought with gold or acquired as rewards for some events or fights.

After each fight, you’re rewarded with gold and get to add cards to your deck from different clan decks. Furthermore, between fights, you can take one out of two different paths in the map, with each granting access to different merchants and encounters, rewards and card upgrade options. There are over 21 random events, 88 artefacts, and over 220 cards in the game, spanning across five different clans, each with 10 levels available for you to unlock.  With that said, before starting a new run, you actually get to pick your primary clan and your allied clan, which will not only affect your starting deck, but also the cards that you will find along the way, as well as your champion, which is a signature unit from each clan that is free to use and upgradable in various ways. 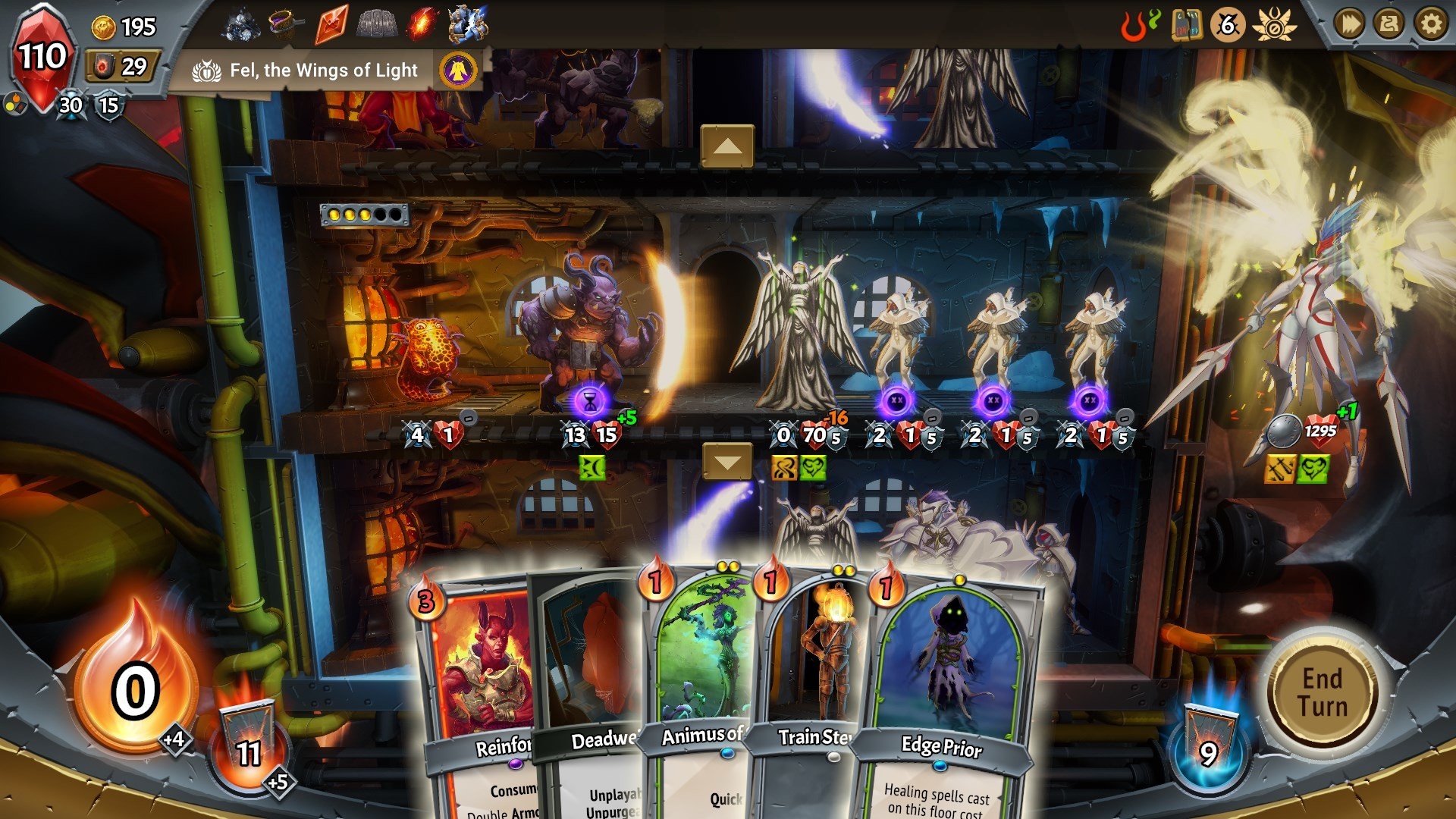 Surprisingly, Monster Rain also features multiplayer via a Hell Rush mode, which essentially puts you against two other players in timed battles where the person with the highest score wins. Furthermore, there are also daily challenges where you can compete for a spot on a global leaderboard, and then there are also custom challenges, which you can create with all sorts of different modifiers and then share with other people.

Monster Train is one of those games where you’ll most likely fail a lot in the beginning, while you’re still figuring out different strategies and haven’t unlocked most of the cards, and it’s worth taking that into account if you play this, just so that you’re ready for it and don’t quickly quit the game if you end up doing poorly. Once you get a groove going, the game just becomes even more fun, and I’m sure nothing will beat that feeling of achieving your first win. Based on my experience, a victorious run can take between an hour to an hour and a half to complete, but you can quit anytime and the game will save your progress, as long as you’re not in battle. There’s no way you’ll end up winning all your runs once you’re experienced enough in the game, but that’s just part of the fun, every time you lose you learn something new.

Monster Train was built with replayability in mind, and it shows thanks to its unlocking system, custom challenges, Hell Rush mode, and obviously the randomness that is so prevalent in deckbuilding games. Then there are also 25 difficulty levels, which will gradually unlock as you complete the game on the highest difficulty that’s available to you. For someone who tends to stay away from games with any sort of card mechanics, I have to say that Monster Train has been a tremendous surprise. The vertical dynamic of playing in three different lanes simultaneously not only adds an extra layer of challenge, but also of complexity that makes the game much more engaging, and this is only magnified by all the different synergies that you can come up with all sorts of cards. Overall, Monster Train is an absolute blast, and this is coming from someone who doesn’t usually enjoy card games. I wholeheartedly recommend it if you find its concept even slightly interesting.

Monster Train was built with replayability in mind, and it shows thanks to its unlocking system, custom challenges, Hell Rush mode, and obviously the randomness that is so prevalent in deckbuilding games.