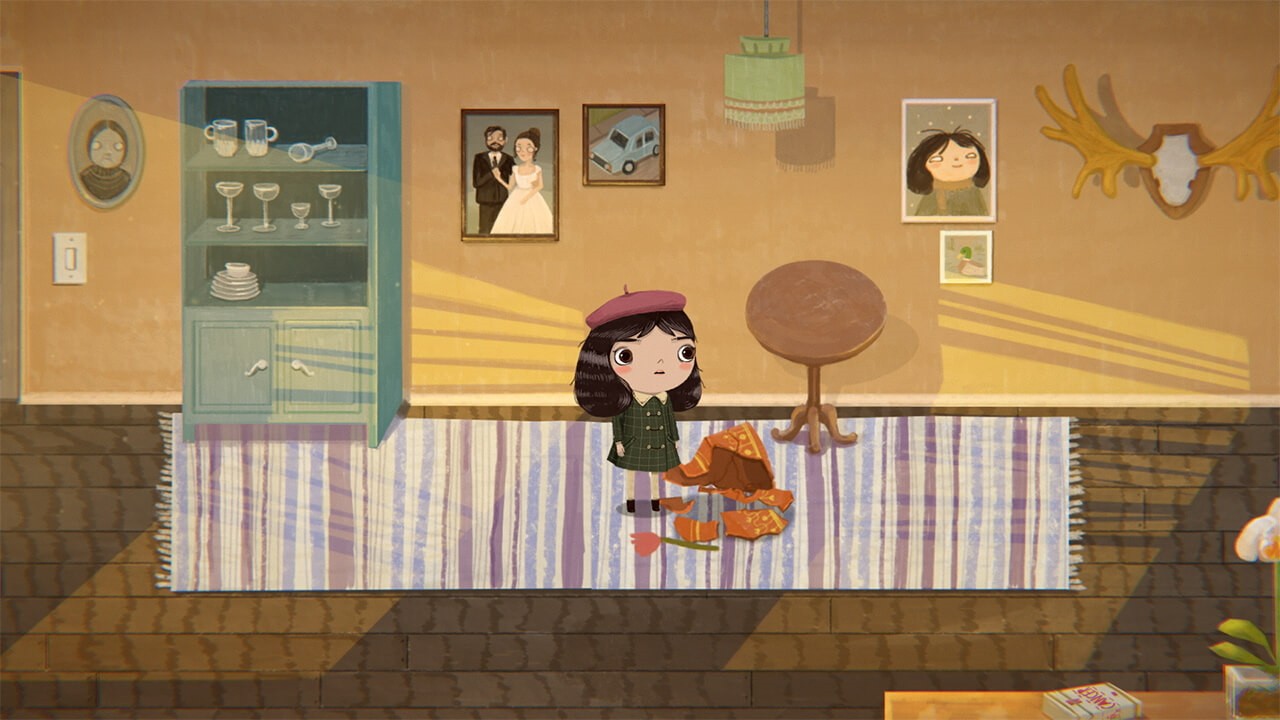 Dark humor is not always a well-executed concept. Though there are people who like the idea of having something that plays on shocking or depraved ideology in order to get a laugh, there are times where the jokes don’t hit and it just becomes uncomfortable or downright alienating. Just watch any starting standup comedian who thinks they can successfully emulate the stylings of Anthony Jeselnik and then bomb horribly with their “fetuses did 9/11” material. But when the humor rides the razor’s edge of aghast and delight, it can keep you entertained on a miraculous level that draws gasps and grins equally. Thanks to Killmonday Games, Nintendo Switch owners can now embrace the cold, grim but surprisingly glittery world of Little Misfortune.

Misfortune Ramirez Hernandez is an eight-year-old girl who is growing up in a very sad state of affairs. Her daddy is a bit violent and forgetful, her mommy is clearly some kind of alcoholic, but she isn’t letting any of that get to her and her beautiful world of imagination. One day, a disembodied voice (whom she calls Mr. Voice) offers Misfortune a fantastic journey: a special game to play in order to win Eternal Happiness. Thinking that Eternal Happiness would be a good gift for mommy, Misfortune chooses one of her dolls (either a stuffed unicorn or a painted rock) and heads out the door to follow Mr. Voice’s directions to where the game will be played. The Voice, however, speaks directly to the player and lets you in on a little secret: Misfortune is going to die today, and there’s nothing she nor you can do about it. Still, there’s always a chance something could change. Between the random appearances of a fox named Benjamin, the posters of missing children and the sneaking suspicion that something is off, Misfortune can certainly carve her own path: where it will lead is anybody’s guess. 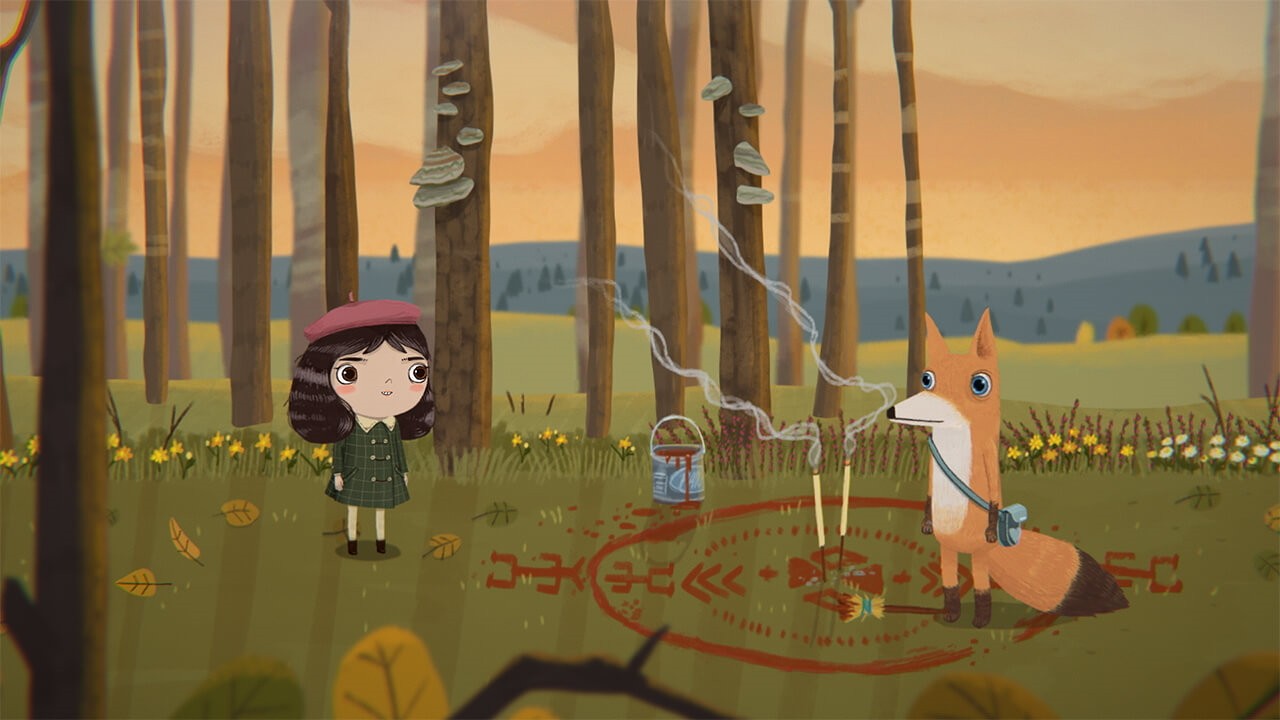 Little Misfortune plays in a somewhat static, side-scrolling story. Each area involves you walking from one end of the screen to another (or running if you wish) and interacting with certain objects or things. As you go, you may also be presented with choices, such as if you want to take or leave something, saying yes or no to different options, or simply choosing to cross the street or not. Additionally, Little Misfortune has a neverending supply of glitter that she can toss onto certain objects. Throwing the glitter replaces them with something cuter and happier, effectively masking the horror of the world with a child’s own perception. For example, you encounter a dead bird very early on, which Misfortune proclaims “a sleepy bird.” Adding glitter covers the cadaver with a child’s drawing of a happy bird, and you can draw your own psychological conclusions from that one.

In effect, Little Misfortune is little more than a walking simulator, so it’s up to designer Natalia Martinsson (who I believe is also the voice of Misfortune) to make the journey interesting and entertaining. Natalia, to her credit, does a fantastic job of adding the right amount of innocence and hardened knowledge to this sweet but somewhat disturbed little girl, and I can’t imagine this game without the presence therein. The result is wholly engaging, even if it’s complexly, bitterly sad at many different avenues. Starting off from her home, which has that air of “functional but broken,” Misfortune goes on a truly wild and far-reaching walk that brings her to encounter seemingly every one of the seven deadly sins in some capacity. You stumble across tiny dogs in party hats, B-Boy styling ducks, adults who hide behind masks of happiness (which felt very We Happy Few), and sign after sign that something is deeply, deeply wrong in the world of Little Misfortune. There are times when the horror seems a bit over the top in terms of a child simply glossing over it, such as when she discovers a suicide victim. However, the way that it’s spoken about and the reactions from both Misfortune and the voice help to break the tension, and I think that’s the important element that keeps this game from going too far in the darkness direction to make it unforgivable.

If Misfortune reached any sort of awareness about the world she lives in before the very end of the game, it would be far too sad to embrace or to even want to play. Her attitude, though, is one of constant, borderline disconnected upbeat that baffles Mr. Voice and keeps the player smiling, if not outright laughing. It’s a cheap joke, but it always gets me when a child seems to swear almost out of nowhere, and hearing this little girl curse “Damn it!” over something fairly inconsequential was an effective tool. She ends up at a hamster adult club and witnesses a hamster knife fight, and it’s just too cartoonish to take seriously, even when it’s implied that one hamster is executed. You know, beyond a shadow of a doubt, that something horrible is about to happen, but you never really get hit with the sucker punch of it all until the very end. 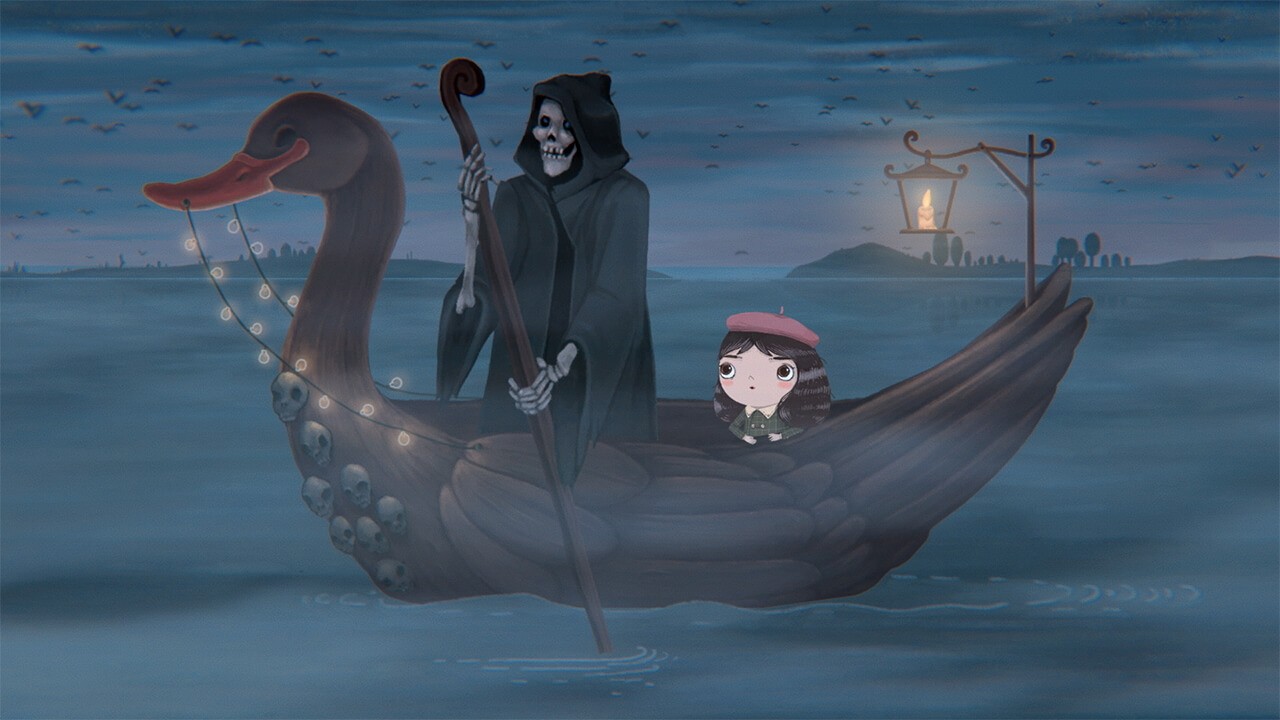 That is where the formula for Little Misfortune falls apart, unfortunately. You see, until the very end, there’s this perception of choice and the chance to change things around. Every time you stop to decide one thing or another (take the fish or put it back in the water?) there’s this slowdown in the music and the sound like you’re doing slow-mo kills in Katana Zero. A weight exists on the decisions, and the extra movements you do (putting mommy’s vase back together, scratching a lotto ticket) seem to affect the world and give you hope. However, after a couple of playthroughs just to make sure, there’s really only one ending waiting for you. Oh, you can still get Eternal Happiness and give it to mommy, but the core element of the end of the game remains the same, which stems from the very first decision you made upon leaving the house. For something like this – this macabre, unrelenting story of sadness and neglect – you expect there to be a better payout when all is said and done. I tried to be a little more optimistic in the melancholy of it all, but it just felt bad, which was an unfortunate way to tie a bow on it all.

Still, when it comes to Little Misfortune, it’s paced well, in retrospect. The humor and madness do slowly step down, bit by bit, as we release the scope of Mr. Voice’s plan and what’s been happening in the world of Misfortune Ramirez Hernandez. The jokes draw you in and make it engaging, the twists keep you there to see it through, and it’s up to the player to decide if the final fate of it all is deserved or unjust, but that’s the way of the world. I don’t know if I could come back and play it again, but I do know that I’m glad for having played it. It isn’t Yikes Forever, but damn does it have some moments in sore need of glitter.

The terrors of a world gone mad can somehow get glossed over with just the right amount of glitter.