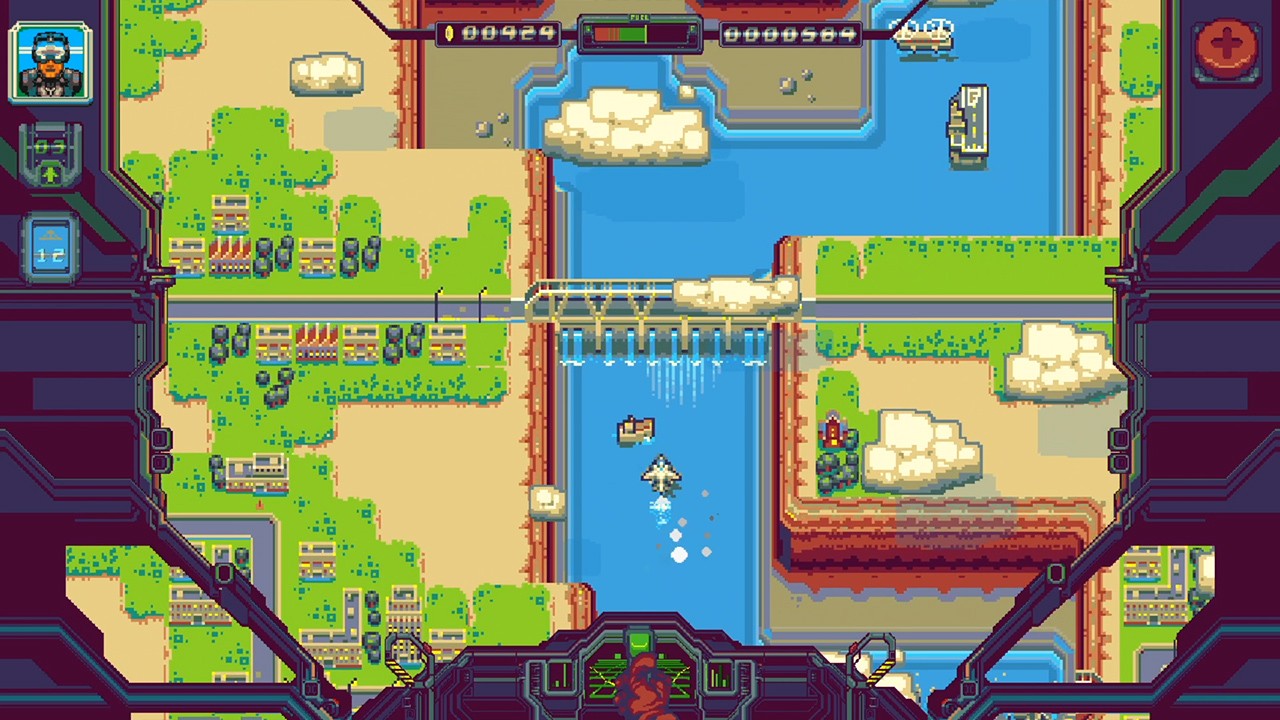 If there’s one thing that can be said for the Nintendo Switch, it’s that its versatility can’t be denied. Not just in its ability to play both as a hand-held device and fully-fledged home console, but also within the titles currently available within its library. Whether it be a First-Person Shooter or a Sprawling Role-Player, there’s a growing amount of titles available these days that shows off the capabilities of Ninty’s hybrid machine. Sure, there’s some amount of downgrading on certain Triple-A’s, but there’s also a whole host of other titles that simply capture the beauty of their style, or genre. Arcade games are just one example, especially with the arcade-perfect reproductions of the Sega Ages series of games that propel me back to the arcades of my youth. It has to be said that arcade, or retro games, have found a new home on the Switch, with the latest one to settle in being Bridge Strike as it bombs a release onto the Nintendo Switch.

Developed by Project R3D and published through Drageus Games, Bridge Strike is a retro arcade game that sees you piloting a jet fighter through the ravines of your homeland, as you fight to stop the enemy advances of an opposing force, as well as wipe out a series of bridges to quell the enemy invasion. Viewed from a top-down perspective, you control the speed of your aircraft, as you fire a barrage of missiles at a whole host of enemy placements. Vehicles, such as boats, submarines, helicopters, jets, jeeps, missile strikes and mines all strive to stop your onslaught, as you navigate your jet around a variety of walled canyons, whilst leaving a trail of destruction behind you. 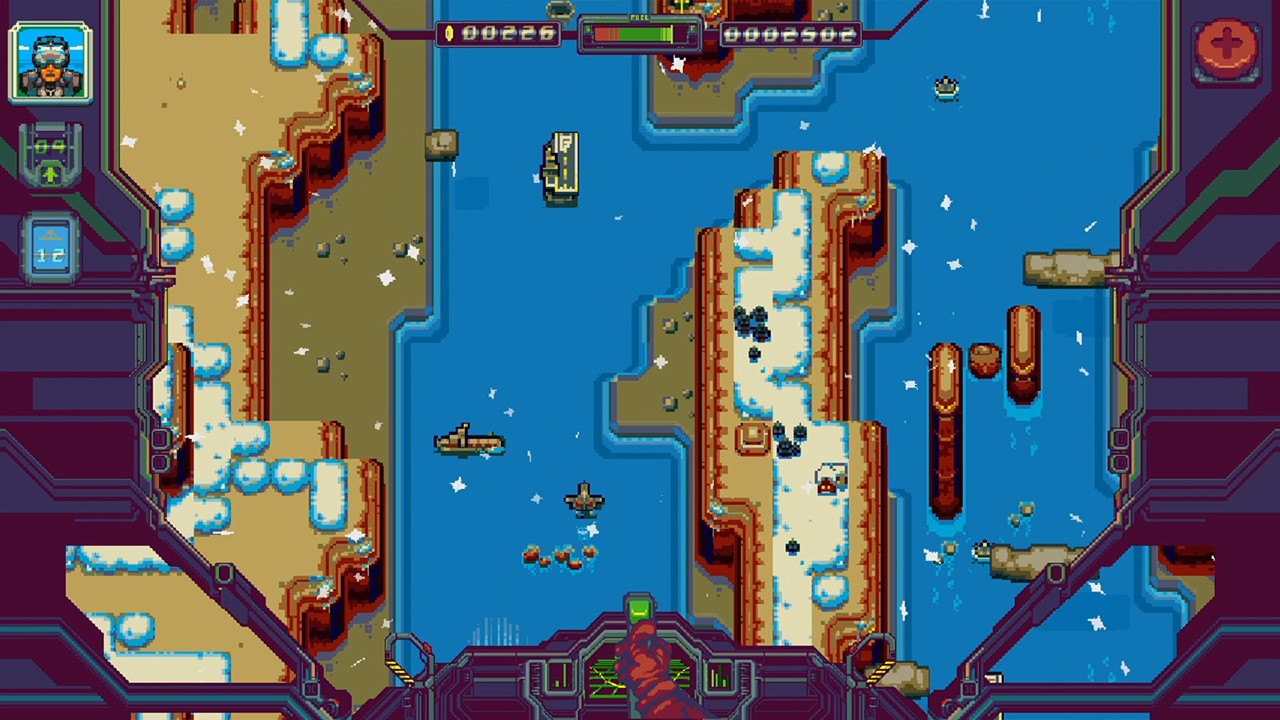 However, this isn’t a simple Shmup. There are far more elements involved and is a game more about precision than it is about bullet-dodging. Each of the levels begin with you flying along the course of a river, as you line up shots to take out the enemy vehicles and bridges that stand in your way. With an unlimited arsenal, you line up your shots to clear a path for which to fly. However, there are many dangers that need to be avoided; as well as keeping a steady eye on your fuel reserves. You fly through a variety of landscapes, from villages, cities, deserts and mountains, as you try and traverse the tricky, and often slimline, ravines that lead to your end-level goal. Accuracy is also an important element of the game, as the higher the kill rate to rocket ratio, the more reward you receive in medals at the end of each level. Your speed and manoeuvrability is controlled by the left joy-con, whilst missiles are fired with the A button.

However, the further you fly, the more fuel you use, with an empty tank sending you crashing into the freezing waters of the rivers below. In order to combat this, aircraft carriers can be found along your route and by using the VTOL capabilities of your aircraft, you can hover above them in order to refuel. As well as bridges and enemy placements, there are also other hazards that need to be avoided, such as rock structures that can create forks in your path. These are all made even more hazardous by an ever-changing weather front that can bring rain, snow and storms; as well as the fading light of the night sky as you embark on a series of after-dark missions.

Although viewed from a top down perspective, your HUD takes on the form of a cockpit-style aesthetic. Your pilot’s hand moves in unison with your inputs and an on-screen camera displays your pilot’s helmet and a fuel gauge helps you keep track of your reserves. The whole presentation of the game looks sharp and vibrant with its pixel-art style to produce a very nice looking retro and arcade-styled game; all accompanied with a chip-tuned soundtrack and sound effects. To add a touch of playability and depth to the game, each structure or enemy you destroy leaves behind coins that need to be collected; making those dangerous canyon walls even more hazardous. With this currency, you can purchase new vehicles to play with, such as an AH-64 helicopter gunship, hovercraft, A-10 Tankbuster and even a UFO or a mouse! 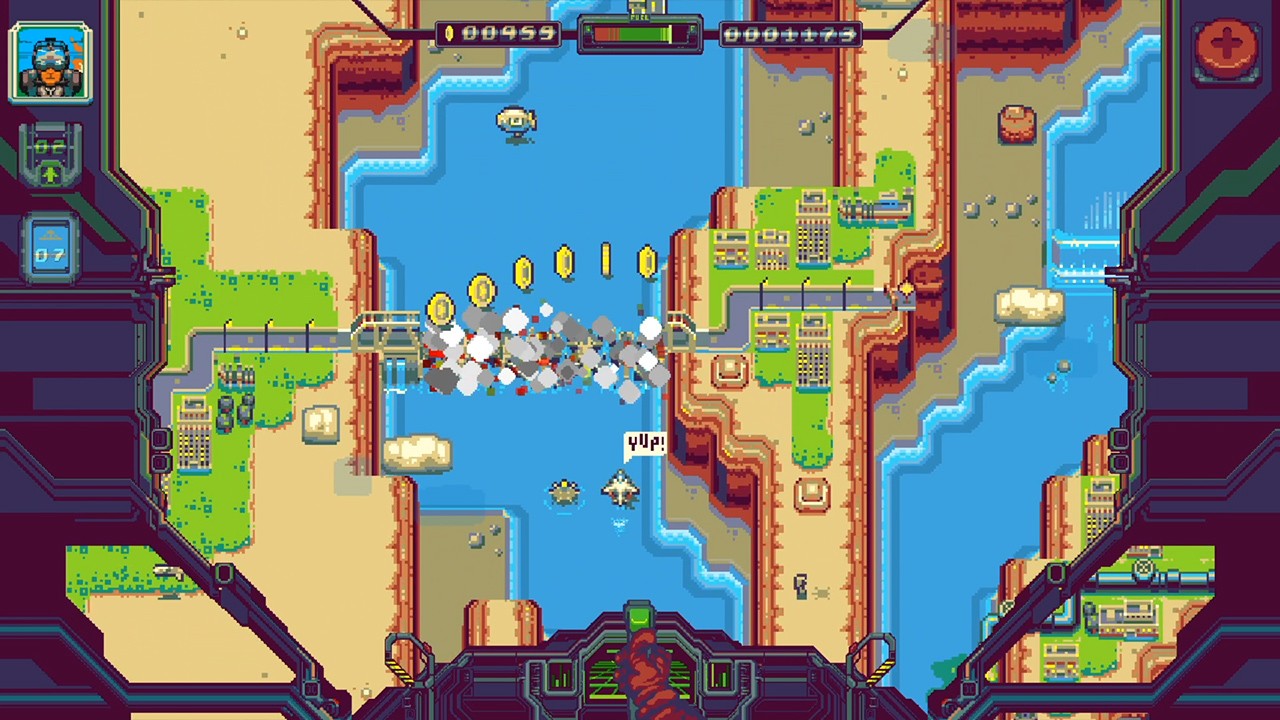 There are two modes of play, from the Raid which is more arcade orientated to a Campaign mode that presents you with a series of mission objectives, the ability to upgrade your pilot ranks, as well as collect the coins and purchase new vehicles. In terms of its play style, this is a nice little arcade shooter that sits well in a casual capacity. Its levels are short and sweet, but still long enough to make it an enjoyable and challenging experience. Progression brings more enemy variety and difficulty, but the joy of piloting your craft, collecting coins and completing each level makes for a nice gameplay loop.

Overall, Bridge Strike is another nice example of arcade gaming on the Switch. Its look and feel sits nicely on Nintendo’s machine; especially when played in hand-held. It may not contain a massive level of depth, but does hold enough content to keep things going over the long-term; especially with its collection of purchasable vehicles with which to play. What it does present though, is a nice and varying challenge with a constant variety in enemy types, courses, locations and weather conditions. Honestly, flying at night is quite an unnerving experience! It’s best played in a casual capacity, as its repetitive nature may grind after a while, despite some variation in what it does, but for a nice arcade experience, is certainly a title worth adding to your collection if you’re a retro enthusiast.

Bridge Strike is another nice example of arcade gaming on the Switch.