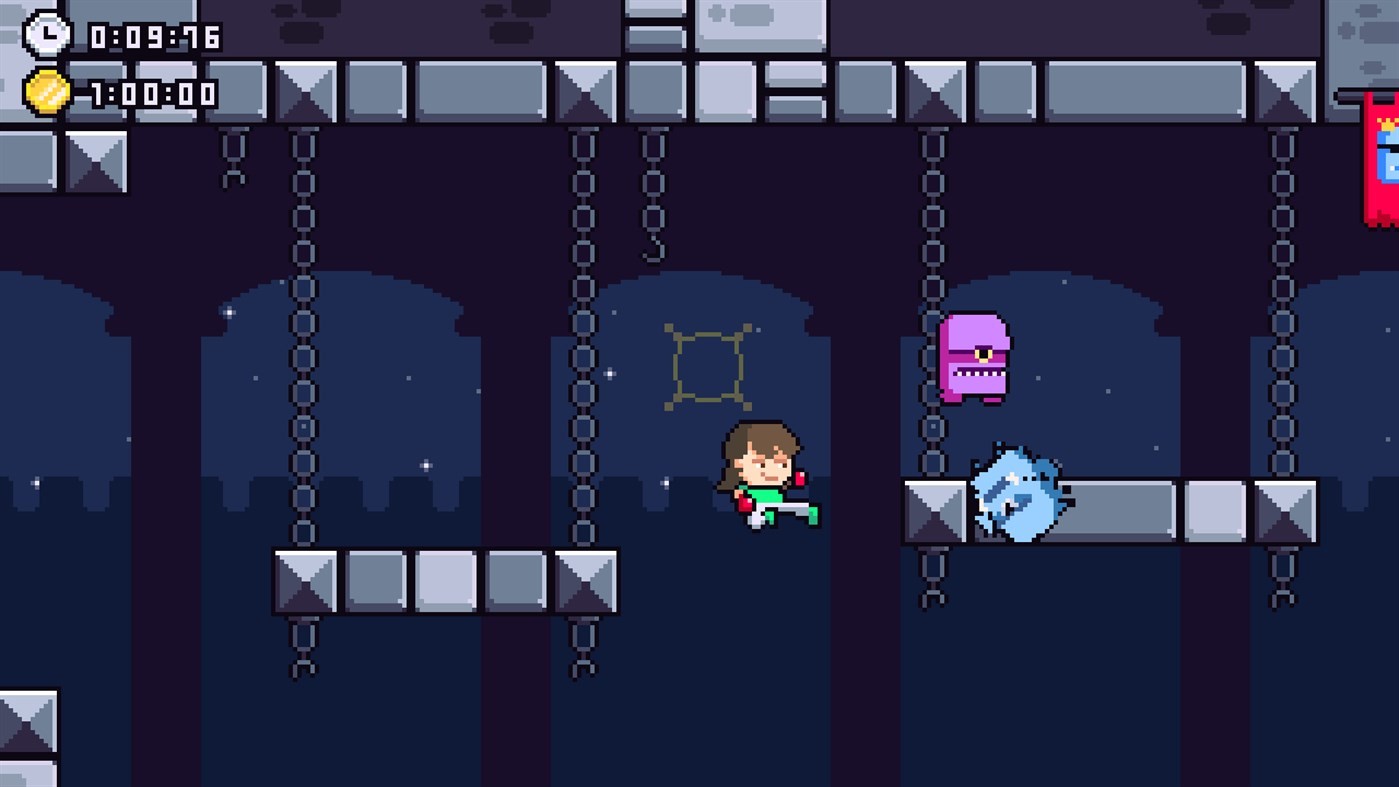 We all know that adventuring on your own is just not as much fun as with a friend. When you happen to stumble across creepy old buildings and medieval castles that you know you shouldn’t explore, you are suddenly braver when you have your mates around. This is exactly what happened to our leading characters Kylee and Owen. They were out for a wander one evening and happened to find Castle Pookapick. Instead of thinking to themselves, “Damn that looks spooky, I’m going nowhere near that!” They decided “Ah what the heck, let’s split up and explore this creepy old building!” Castle Pals has been developed by Brad Erkkila, and published by Ratalaika Games. This 2D platform title asks you to leap gaps and attack the monsters in your path while solving basic puzzles. You must get from point A to point B in one run, failure to do so will have you start at the beginning, or nearest checkpoint, and you must run the gauntlet again.

The story takes place over 3 acts, each contains 10 levels, and you must hunt for the 1 coloured gem in each region. As you collect all the gems you are given the opportunity to play through 10 bonus levels. All in all, you will face 40 stages, 20 for each of the available characters. Both of the protagonists have their own special powers. Kylee appears to be stronger than Tyson Fury, and Anthony Joshua combined and smashes any enemy that comes close to her. Owen on the other hand has the ability to use his helicopter hat to fly above the monsters, and reach places that others can only dream of. As you progress through each area you must avoid spiked traps, activate switches, and open locked doors in order to get to the exit.

The ultimate reward available is to win a gold medal for each stage you undertake. This is accomplished by completing the level without using any checkpoints and beating the posted time. In all honesty, this was a pretty simple task, and most were achieved at the first attempt. If you happen to fail, a small amount of practice will ensure success. The gold medals are pretty pointless, and other than collecting a small number to tick off a few achievements, they have no use, except for maybe gaming pride. As you get to the finale of each act you are presented with a “fearsome” boss, they really aren’t that scary, but those are the words used by the developer to describe these monsters, so I thought I would oblige him. A simple plan of dodge and hit usually defeats them, and you move onto the next act where you have to repeat the process all over again. 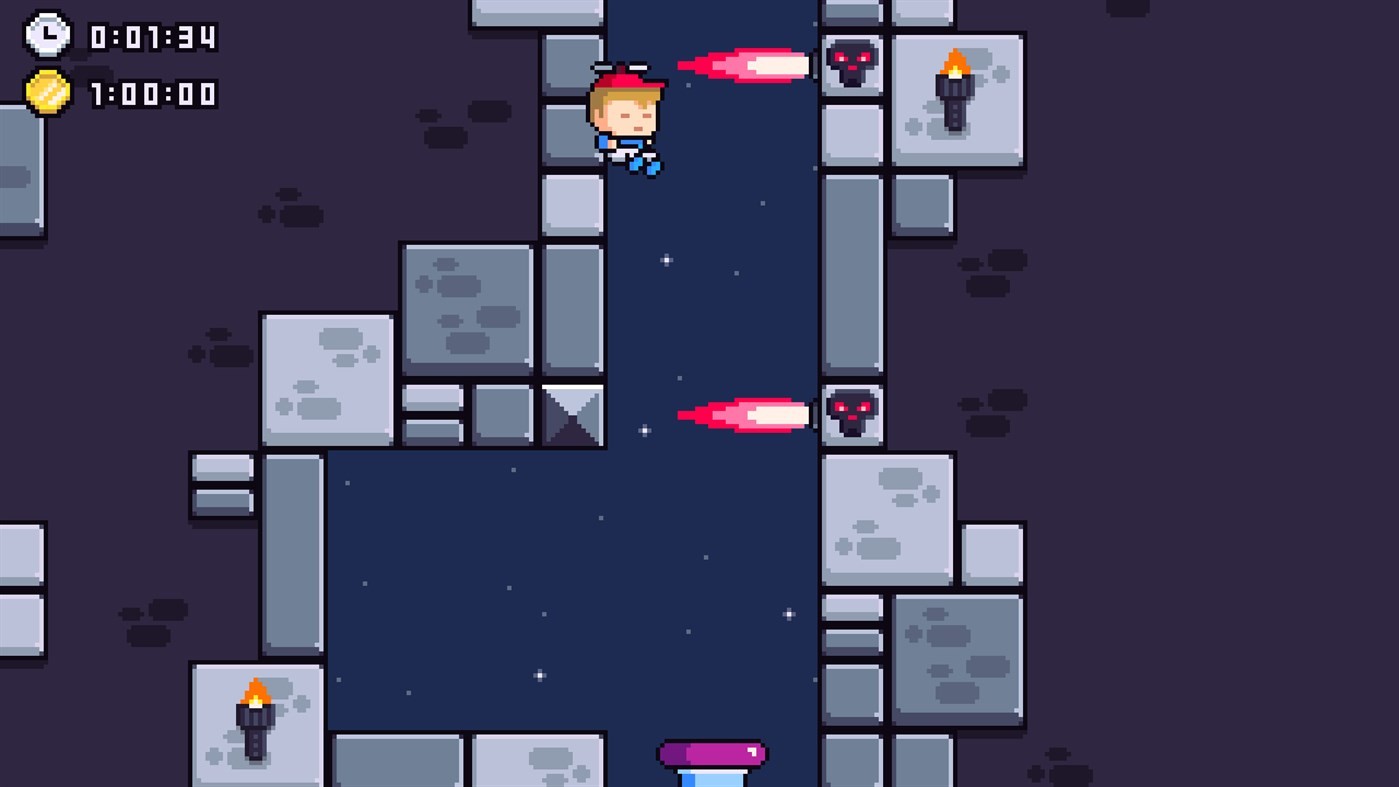 The gameplay premise is pretty simple, and none of the puzzles are overly challenging, not even in the section labelled for hardcore gamers. It was more frustrating than challenging, and the bite-size levels made it easy to make quick progress. This made it quite a casual title to play. The lack of any real challenge will likely annoy veteran players of the genre, though I feel it makes it more accessible for players of all experience levels.

Brad Erkkila has clearly been influenced by 80’s and early 90’s gaming. His presentation has a distinct retro taste, and all the traps, enemies, and game mechanics feel very classic and familiar. There is nothing new about this title, but what he has done, he has delivered well. The colour palette used isn’t overly exciting, everything looks nice, but not spectacular, the pixel art suits the theme and genre well. The action isn’t stuck to one fixed screen, and at times it was a bit of a gamble to jump or fall into the unknown.

Like with the graphics, Castle Pals has taken a classic retro approach with its audio. If you happen to be a gamer of a certain age, then you’ll find these charming as they tweak a sense of nostalgia while you adventure. The audio isn’t trying anything new, it’s playing it very safe, so don’t expect any rapturous overtures or emotionally charged scores. The music and sound effects just exist to do its job in this game, and that is exactly what it does. 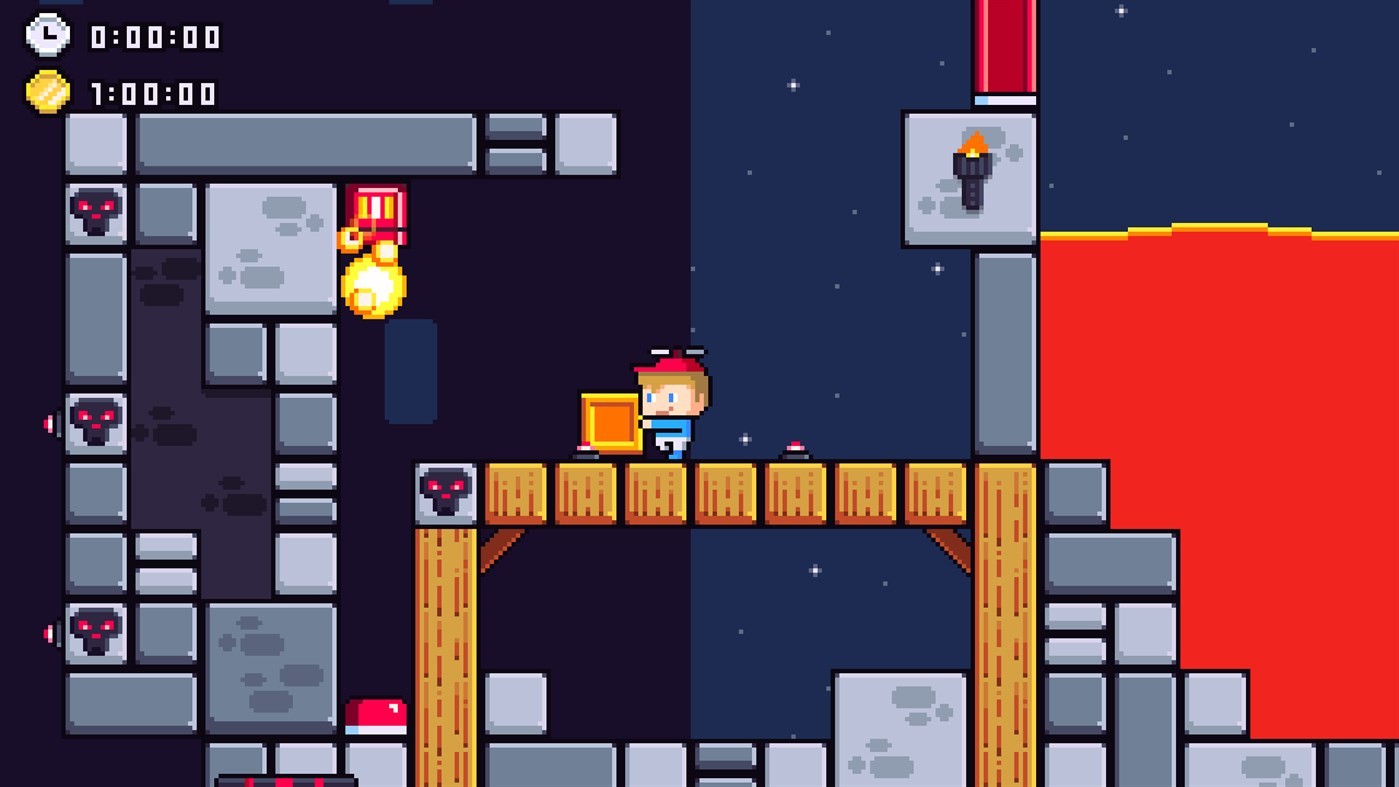 A very simple approach has been taken with the control set up, effectively its just move, and action. This was brilliant as it allowed me the freedom to just beat the stage, and try to collect that gold medal. My issue lies with the hitbox surrounding each monster, it is ridiculous. At times it wouldn’t recognise that you were trying to hit them, and this would end your run prematurely. It was so frustrating to lose a level due to collision and hitbox issues, rather than a lack of skill.

The main joy of this game is how quickly you can get through the levels, but with the understanding that you must find the hidden collectibles, and beat the time to obtain the gold medal. If you are like me, you will want to say you have all the medals. Now no-one can see them, and as I’ve already mentioned, it makes very little difference to the gameplay, yet I still wanted them. This desire really adds a reply factor that isn’t challenging, no, it’s frustrating, and more importantly it’s for personal pride. An easy 1000 Gamerscore is available, and if you are so inclined, you don’t even have to finish the game to show the completed status.

A cutesy trip down memory lane awaits anyone who plans on taking on this game. Accessible for all gamers, but not tough enough for the hardcore players amongst us, Castle Pals can only really be considered a casual and fun platform game. A short-lived title that isn’t overly expensive, so it represents good value for money. It’s something that I would recommend if you are looking for a break from another game, or if you fancy a quick 1000 Gamerscore. So, what are you waiting for? Grab a friend, and ignore all logic and explore that creepy old castle. What’s the worst that can happen?

Exploring is much more fun with friends. Grab a mate, and go exploring in this 2D platform adventure.