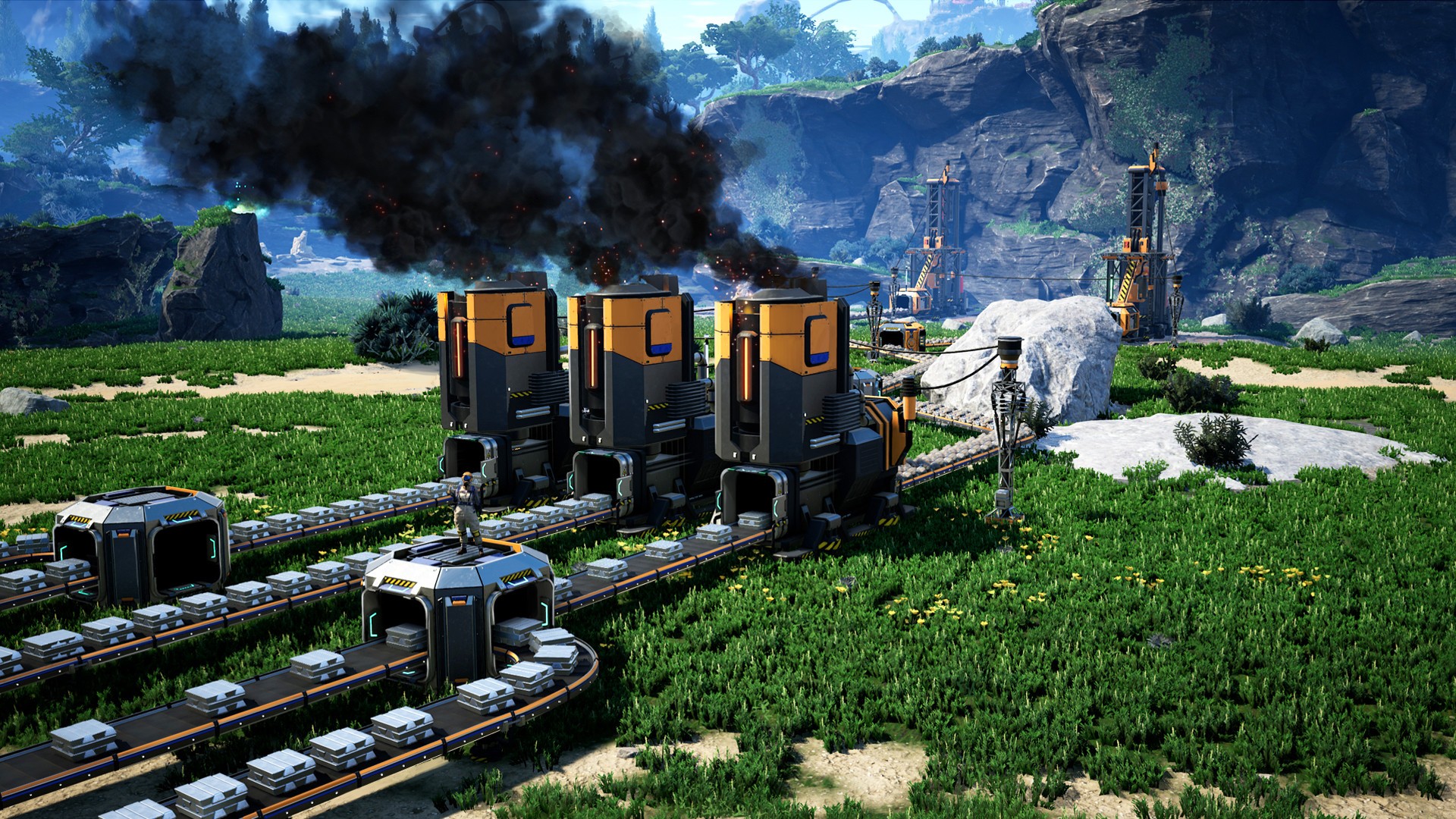 Satisfactory is the latest game from Coffee Stain Studios, which you might’ve heard about thanks to their previous titles, Goat Simulator and the Sanctum series. This time around, they’ve gone all out and created something much bigger, an “open-world factory building game with a dash of exploration and combat”. The game allows you to drop on one of four different starting areas in a huge, beautiful, hand-crafted alien open-world that’s populated by all sorts of different critters, and you’re pretty much given free rein to explore. Then all that’s left is for you to rejoice by exploring and depriving the planet of its resources until your heart’s content.

Although I had obviously seen screenshots and videos about Satisfactory before playing it for the first time, I was still stunned when I first exited out of my drop pod. The game looks absolutely gorgeous, and nothing beats that sense of discovery as you wander into an unknown planet for the first time and gaze at the horizon. During my first hours, it really felt like every time I stopped and looked around me, I would notice something new on a certain mountain top or on the distance, like some strange plant, or some sort of huge alien creature wandering about. If this was some other game, I’d probably go explore, but in Satisfactory there’s much work to be done, so that can be done later.

The game can be played both in single-player or with other people, and while there isn’t a player limit, at least as far as I know, the developers have stated that officially the game only supports up to 4 players. In any case, I’ve been having a blast playing alone, and so I can only imagine how much fun this can be when played with other people. Still, it’s worth noting that there are no dedicated servers, which means that the session is hosted on one of the player’s PC in the group. 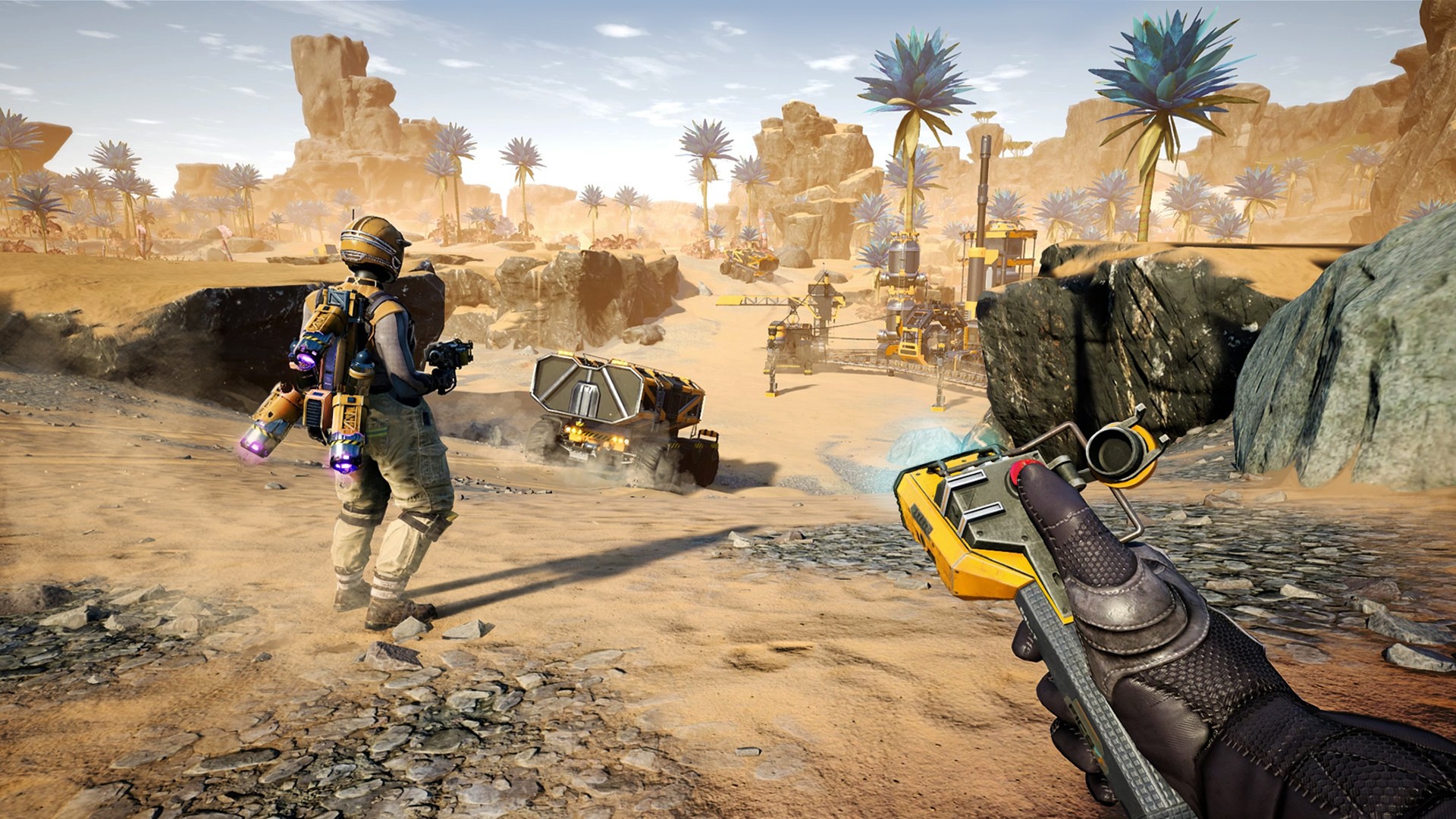 Now, during the first hours, you’ll find yourself doing a lot of the most mundane tasks such as manually gathering resources in resource nodes, refining ores and crafting all sorts of parts, but soon enough you’ll slowly start to expand your base until it eventually becomes a fully automated factory. In Satisfactory, you progress through the game by achieving a series of milestones, which essentially require you to provide a certain amount of resources to your HUB, so that FICSIT Inc., your employer, grants you access to new technological upgrades and buildings. Still, this method of progression doesn’t really make the game feel linear at all. Even though these milestones are the closest thing that you’ll get to actual objectives in a sandbox game such as this, there are various milestones that you can go after at any given time, you’re not confined to just one. Furthermore, you can obviously build your own factory however, and wherever you like in the world, which means there’s plenty of room for experimentation and optimizing.

While Satisfactory might seem like it is a pretty accessible game at first, if you don’t put any thought into it, your first factory might end up becoming a mess without any sort of planning or organization. That was what happened to me, I didn’t know what to expect at first, how much space I’d need in the future, so things just kept on piling up, mistakes kept being addressed in less than optimal ways, until I eventually decided it was time to start fresh. Based on my previous experience, I started to build a whole new factory by properly planning where to place things and how many things I’d place beforehand. Still, it didn’t turn out to be exactly what I wanted, but that’s one of the many great things about Satisfactory, the game is an almost never-ending learning experience.

Unlike many games in this genre, in Satisfactory you have access to unlimited resources, with the twist being that these are located in specific nodes scattered throughout the world, which can only be exploited by certain buildings. For example, each ore deposit can only fit an automated miner in it, so while there are endless resources, this forces you to optimize your production line to get the most out of it. A single ore miner can produce a certain amount of ore each minute (depending on the miner’s tier), so you can actually make it so that a conveyor belt coming out of the miner splits into separate conveyor belts, with each conveyor belt going into a different smelter. This makes it so that you’re constantly smelting that ore into ingots, which ensures that the conveyor belt never stops and that you’re maximizing your resource output efficiently. This is the most basic example, as it’s the first one you’ll run into when playing the game, but the game is riddled with supply chains like this and you’ll have to individually build each one of them by hand, from refining the most basic ore into a useful part for crafting, to producing nuclear power and handling the waste that you must store indefinitely and the radiation that comes with it. 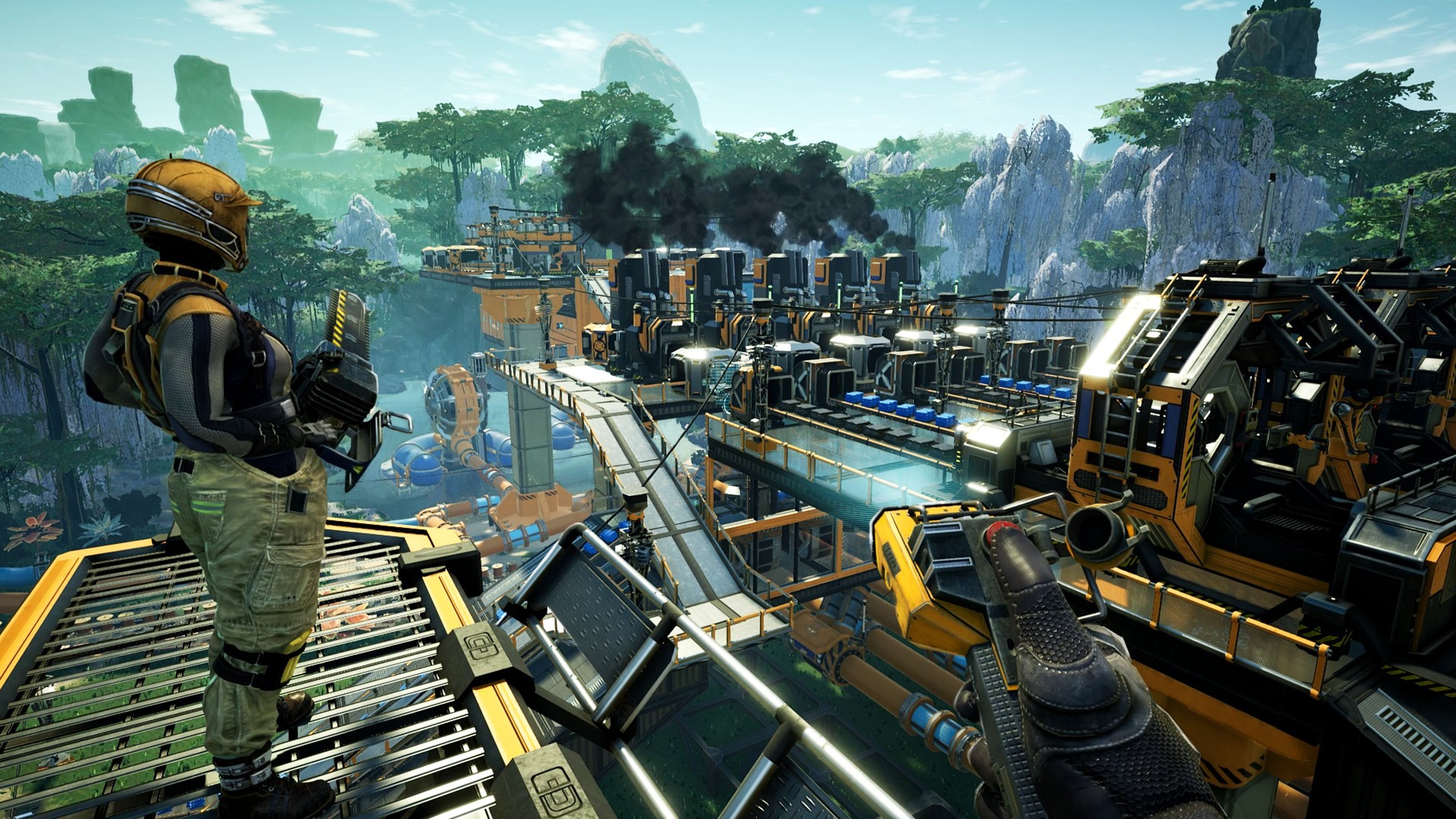 There are plenty of other mechanics that play a big role in Satisfactory, such as establishing a power grid with a never ending supply of fuel, using vehicles, trains and hyper tubes (think the transport tubes from Futurama) to traverse the world, and a myriad of tools that you gradually unlock that will only make your life easier. There’s a lot to cover, but I’m sure those things are best left alone for players to enjoy and find out on their own, rather than reading about them and going into the game for the first time and already knowing a lot about the game itself.

If it wasn’t clear by now, this is a co-op/solo experience, there’s no PvP or anything like that. Even though there are some alien creatures in Satisfactory, they don’t really pose a big threat to you, as they only attack you if you get too close and they’ll just outright avoid your buildings. Sure there is combat, you can fight them, but that is far from being a major feature of the game, so if you’re looking for something more action-oriented, I’m afraid that you won’t find that here.

If you enjoy sandbox games about building, crafting and optimizing, with the closest comparison being Factorio, then I’m almost certain that you will love Satisfactory. This is one of those games where you can completely lose the track of time and spend hours playing in one seating. Whether it’s in single or multiplayer, Satisfactory is sure to provide hundreds of hours of stress-free fun, creativity, and excitement, and I honestly can’t wait to see what’s in the next update.