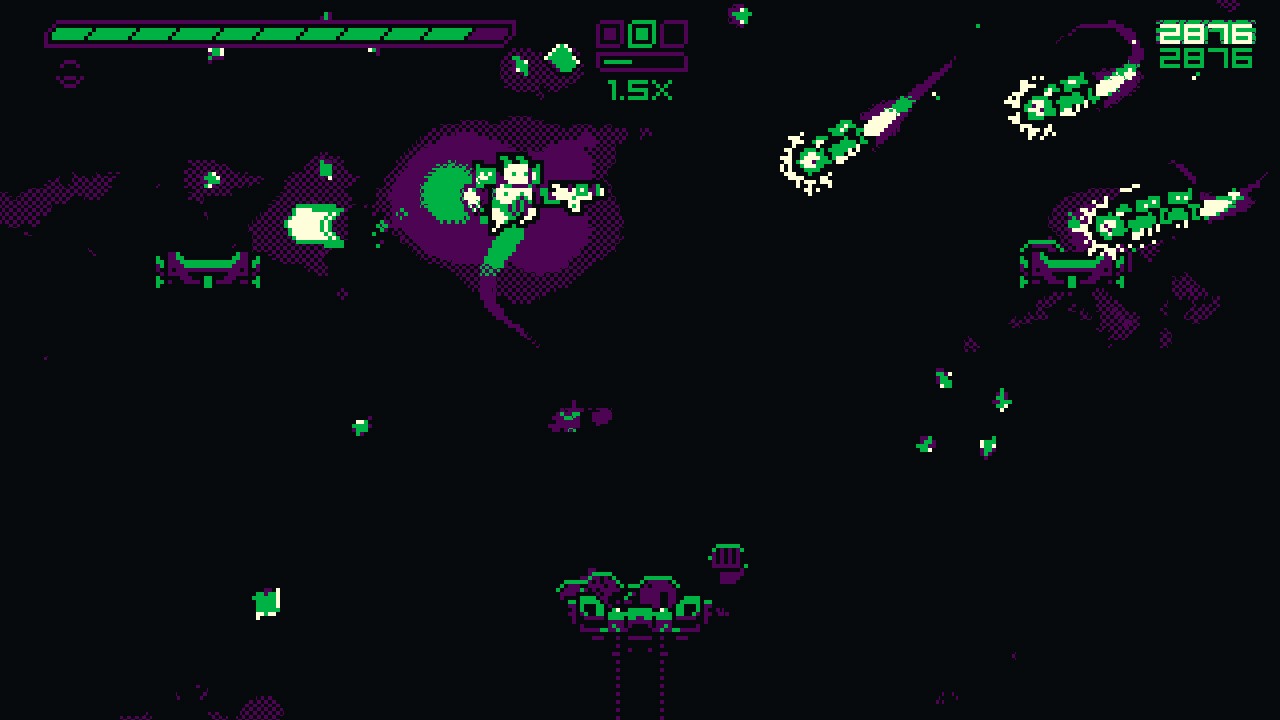 When videogames started the arcade genre was pretty much the only one. In recent times it’s been seen way less, mostly relegated to mobile. This doesn’t mean they don’t have a presence though; there are still great arcade games in recent memory such as Tower Fortress or Downwell.  Hell Is Other Demons is a newcomer to the genre, bringing into the market a highly polished experience, albeit with bugs here and there.

The setting of the game is fairly simple, there’s not much going on for the story. After some sort of war, hell has become pacified and numb. As a resurrected demon, the player must progress through it in order to instill hell back into hell. It is a staple for arcade games to not have a very developed or complex story; most don’t even have one at all, so this is nothing surprising.

To compensate for the lack of story, Hell Is Other Demons has a great visual design. The color palettes used to highlight enemies and the player character against the background, making them the focus at all times. Enemies also have a great design; every single one of them is recognizable and different from all other types while still maintaining a consistent style. This is especially true for the enormous bosses, which look incredible.

Another point in favor of the game, even before going into the gameplay, is its soundtrack. The music in Hell Is Other Demons is simply gorgeous, even if liking it or not depends on opinion. Every single track is different while still consistent when listening to the soundtrack as whole tracks just progress into each other, without feeling like separate parts. The SFX in the game are also quite good, they’re all audible without drowning the soundtrack or distracting from the gameplay itself. 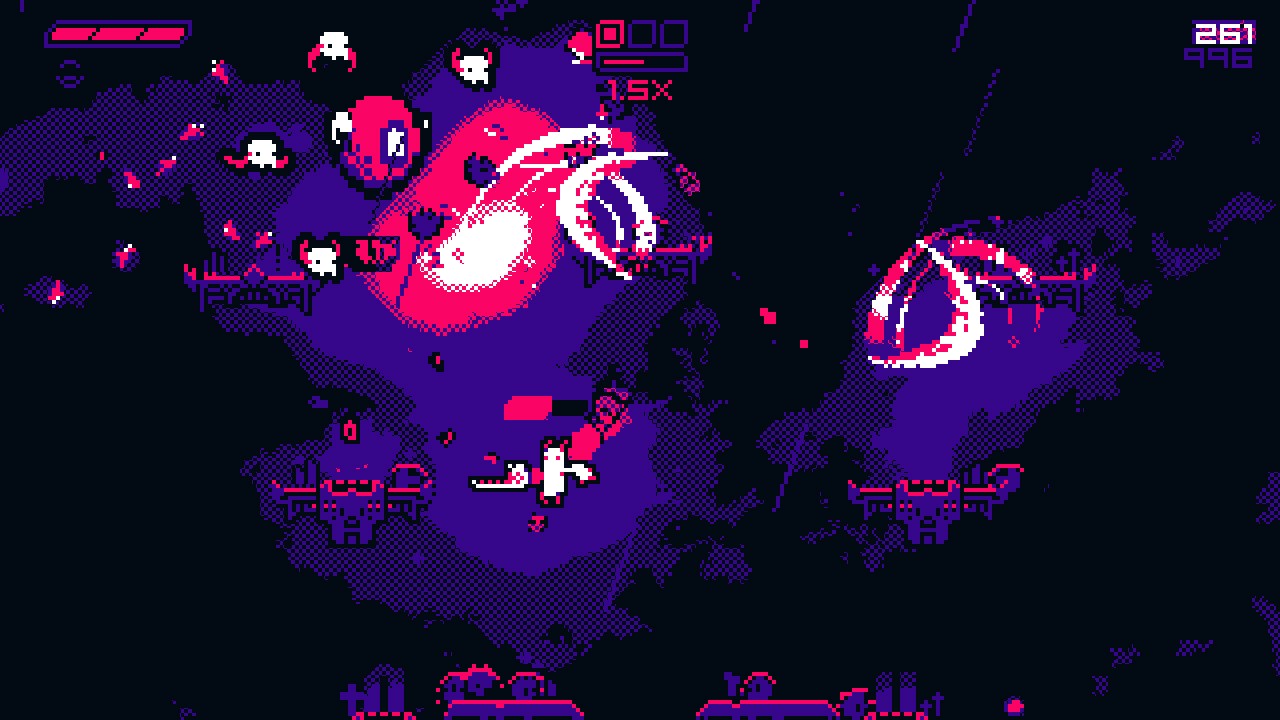 Finally onto the main dish, the gameplay; Hell Is Other Demons plays as an arena fighter, with waves of enemies to fend off appearing one after another. Combined with this simplicity, the controls are slick and precise, making it a joy to play.

From the moment the game starts till the moment, it ends objectives and mechanics stay the same. While new weapons and passive abilities can be acquired, they do not change the gameplay at all. Instead, they ease up the levels by giving the player bonuses, to balance it there is only a certain amount of upgrades that can be carried at once, forcing the player to choose which to carry.

The levels themselves are not particularly difficult, without being easy either. If a player so chooses, there are three extra challenges per map, adding an extra bit of entertainment for those who set out to fulfill them.

As previously mentioned, enemies are all pretty different from each other, but they all share an important feature: they have a tell. Whenever an enemy is about to start, they have a particular animation to warn the player, allowing them to time their movements. This doesn’t make the game easier though, just less chaotic when the screen is filled with enemies.

Besides the main campaign of the game, there is also an arcade mode. In this mode the players will fight endless waves of enemies, receiving upgrades at set intervals. In this mode, players can also use different characters, each with a unique set of starting equipment. Points obtained in this mode factor in for the online leaderboards, where players can see other people’s scores and attempt to beat them. 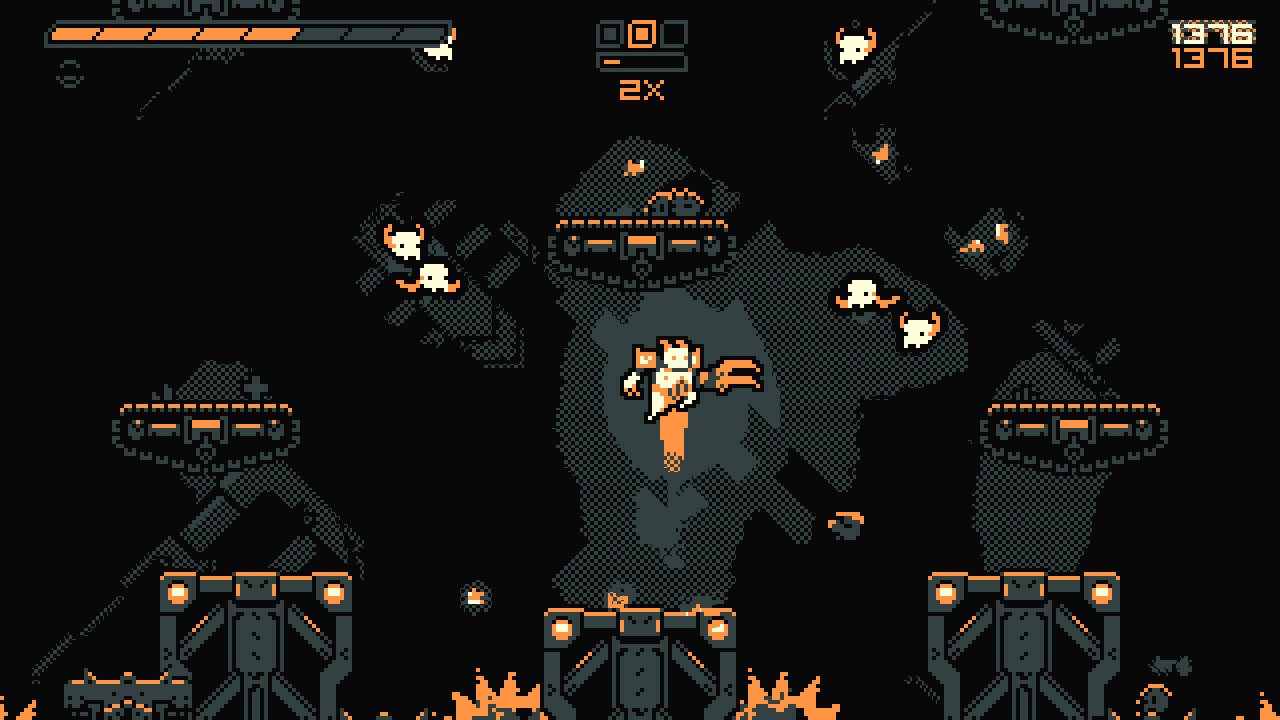 The game isn’t without flaw though, as previously mentioned there’s a pair of bugs here and there, but nothing too important. One of them is that after playing for a while, the game may stutter a bit with screen transitions and possibly crash after the level (though this has only happened once so far). Another one is that some of the boss hitboxes can be a bit janky. For example, the first boss can be killed in a single phase by abusing the hitbox.

Overall, Hell Is Other Demons is a thoroughly enjoyable game accessible to any type of player. Its price is also more than enticing at a pretty low $9.99/£7.19/8,19€, more than fair for the length and overall entertainment the game offers.

The time I spent playing the game was a blast, every level was fun to play and never left me thinking it was too hard or too easy. I even chose to make it harder for myself by attempting all challenges together without equipment, which let me tell you it is not a good idea if you want to finish quickly.

Having an incredible soundtrack also helped my enjoyment a lot; it’s curious how many games have a single song playing in a loop. Regardless of if the reader decides to play the game, I really recommend listening to the soundtrack, which can be found in the artist’s bandcamp.

Hell Is Other Demons Review

Hell Is Other demons is a really solid little arcade game that offers enough challenge to entice players without alienating anybody. It also features an amazing soundtrack and graphics, adding to its appeal.