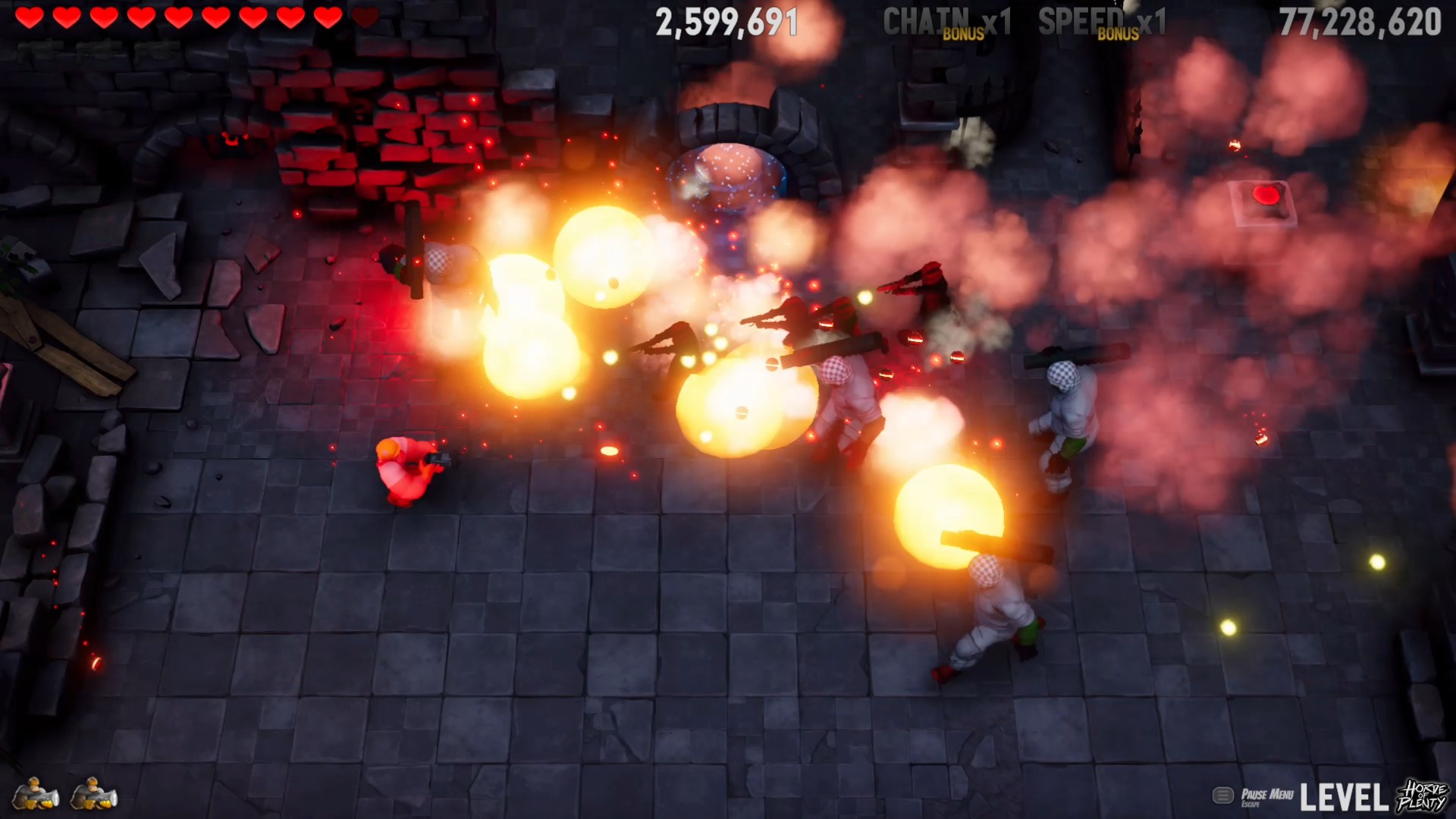 Horde Of Plenty is an action packed forward scrolling twin stick shooter and is available to PC and Xbox One and already on the market to everyone. Horde Of Plenty was developed and published by SMONCH, LLC in June 2020 and also enhanced for Xbox One X. The game sets you off as a construction worker known as Ron Mayhem, his beloved pet, Puffy, a rather round and yellow puffer fish has been captured by the forces of evil. You must slay the hordes of enemies, collect the loot and attempt to recapture Puffy to bring him/her home.

I am a big fan of twin stick shooters and though I wish I was better at them than I think I am, I massively enjoy them. I recall being hugely addicted to the Geometry Wars titles on Xbox 360 and then the most recent one on Xbox One. Attempting to get the highest score possible and restarting levels repeatedly if you died early on is the drive and addiction for me. Horde Of Plenty offers up 14 levels of gameplay, which is plenty to experience and work through, see what I did there.

You’ll start off with a choice of five difficulty levels to choose from based on your personal choice, I recommend starting with the easiest just to get a feel and your bearings first. As twin stick shooters go it doesn’t differ anymore from others you are likely to have played, you’ll be using the left stick to navigate around and the right to direct your fire towards the enemy and this is pretty much all you need to know. This will appeal to the casual gamer and it is very much pick up and play even to people who haven’t touched a controller before. 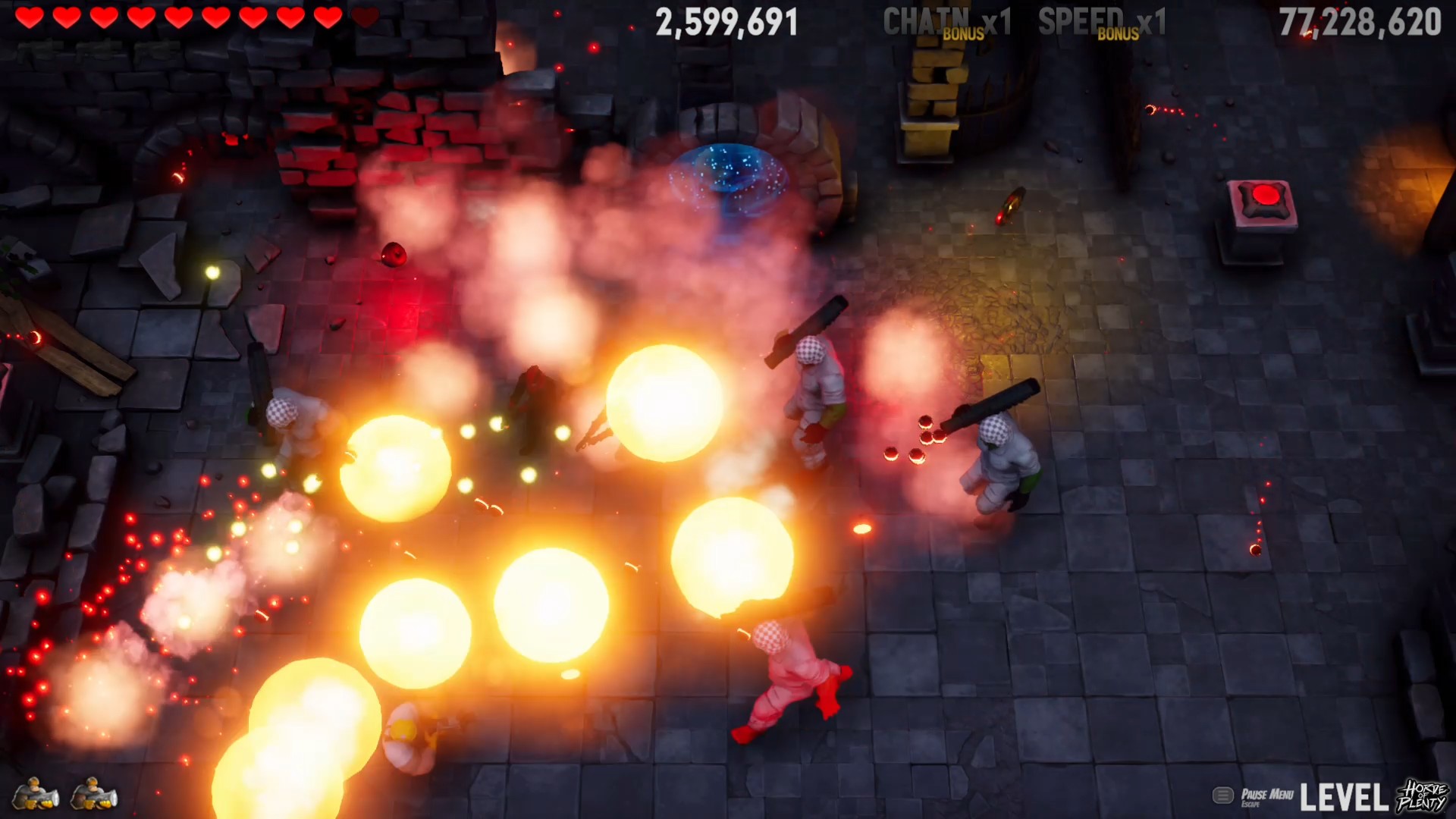 I’d very much liken this to the secret arcade game in Black Ops where you’ll be navigating the levels and shooting towards hordes of enemies. Depending on the difficulty level obviously will change how many enemies occupy the screen and start to come towards you. The quicker you kill and the more consistent you chain your kills together, the more score you’ll start to acquire. The goal here is very much to keep your kill chain going as long as possible to gain the maximum score possible. It’s rewarding because you can also see the score of each enemy. You are rewarded by a number that flashes once you have slain them. You can gain additional score by obtaining treasure that spawns on the level as the game progresses, you’ll want to aim for these pickups as they grant a good chunk of additional points. It’s important to note that if an enemy hits you at any stage, this will not only take a bar of health away, but will interrupt your ongoing kill chain, so do your best to dodge any gunfire and keep moving to keep away from the path of the critters that will keep chasing.

As you progress through each level, you’ll see a glowing blue gateway at certain stages, this grants you the chance of a get-out clause of finishing the level early with the score you’re carrying, or you can continue on with the onslaught. Passing through these gates will increase the intensity level of the enemies, and you must be prepared to engage even more constantly and consistently with the chance of losing lives even more likely. Every 100,000 points it appeared to grant an extra life and you start the game with only three. Once these three lives have been expired, it will be game over and you must start over. There are health pickups which spawn at random throughout the world so it is always a massive boost to try to aim to pick these up as you go along as ultimately this will give you a lifeline in your survival time.

The combat was very fluid as was the movement through the levels, responsiveness of the stick controls appeared to be very sleek throughout and I had no complaints at all here. The level design was very compact and you really have to think about your movement and where to navigate to next to ensure you don’t get hurt. As you ramp up the difficulty level, the intensity of enemy fire is very challenging even on as low as normal, but true experts will probably delve deeper into the harder difficulties. I found this as addictive as Geometry Wars, as it had the same feel for me to want to get it right every time. I wanted to push the boundary and pass all those blue gates and not take the easy way out and go for the high scores. The game always flowed exceptionally well, and the level design was always simple but effective. Graphically the game was well blended in terms of colour and the variance of enemies made this palette of colours fantastic to look at on a 4k screen. 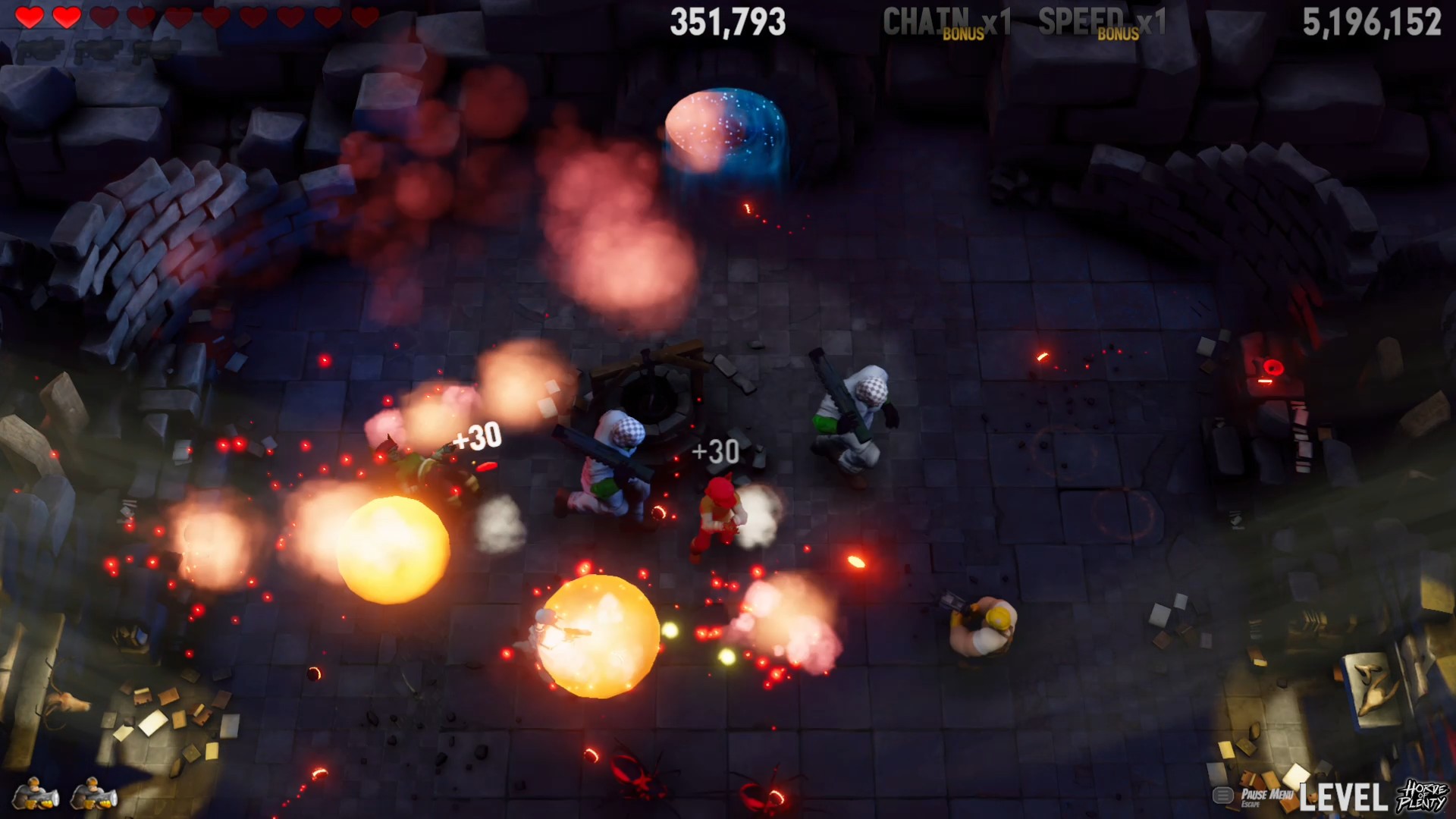 The only other differing power-up apart from the health and bonus point pickups were weapons which altered the range of fire or how many shots were emerging from the gun. I felt like Horde Of Plenty needed the odd grenade or bomb to wipe the screen quickly if you were overrun with the barrage of enemies. Maybe some kind of speed up or temporary shield just to add to the overall feel of the game, however these ideas were non-existent, unfortunately. Playing through all 14 levels in total will take a little under an hour, which isn’t a bad thing for a casual twin stick shooter like this because the differing levels of difficulty will add the longevity to the game. What really kept me playing beyond finishing all 14 levels, however, was the online Leaderboards. On the main screen of Horde Of Plenty there is an all-time high score, which shows the top five players in the world overall, daily Leaderboards and also top five friends, it made me want to keep trying to see how close I could get to the top five in the world and also keep on top of the friends Leaderboard.

Horde Of Plenty does well in the respect that it offers a plentiful arcade title at a low cost of £12.49 at the time of writing. The online Leaderboards and varying difficulty levels add huge longevity if you are a hardcore fan of twin stick shooters like me. For the casual players, however you may not want to continue beyond playing through the initial 14 levels, which will limit your playtime to only a few hours if the game wasn’t to be revisited. Overall, it’s a game I’ll dip into every now and again just for a good crack at the high score. I would love to see an expansion with additional levels at some stage and this may be ambitious, but a head-to-head mode would really keep this game going. If you had the ability to go 1v1 with the highest score winning the game that would be a fantastic addition, but that is me thinking out loud. If you love twin stick shooters, then it’s a must buy!

Horde Of Plenty is a fantastic twin stick shooter which has the addictiveness levels of some of the most popular games in the genre such as Geometry Wars.