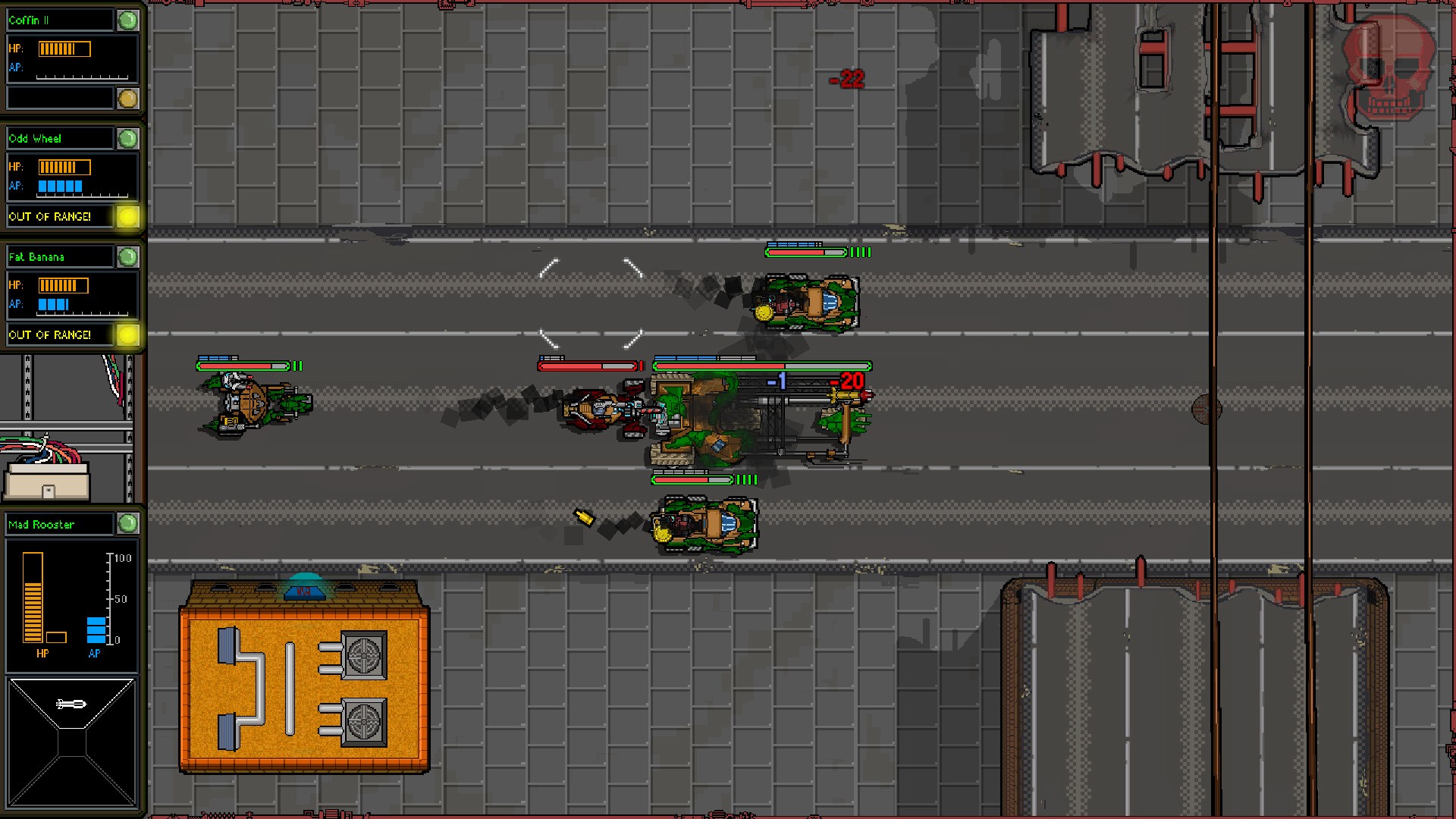 Like all forms of media, games build upon the successes and failures of their predecessors. While first-person shooters nowadays often feel like knockoffs of older games, earlier titles like Wolfenstein 3D and Doom were unprecedented, experimental and even though modern FPS games are all heavily based on those original games, modern shooters have made great strides in improving everything from gameplay to graphics to the narrative. Essentially, all games have previous games to thank for the various mechanics and themes that we take for granted today. Sometimes this can cause cheap knockoffs of popular games, but other times, such as with Convoy: A Tactical Roguelike, it results in a well-balanced and unique experience built atop the shoulders of giants.

Convoy: A Tactical Roguelike is a top-down squad-based strategy roguelike heavily inspired by FTL: Faster Than Light and the Mad Max franchise. In Convoy, your starship has crash-landed on the wasteland planet of Omek Prime. You control a team of combat vehicles traversing the irradiated surface in search of parts to repair your ship. By completing missions for the various factions that inhabit Omek Prime, you collect supplies to upgrade and repair your convoy while defending your cargo and unveiling stories about the citizens of this strange new world. 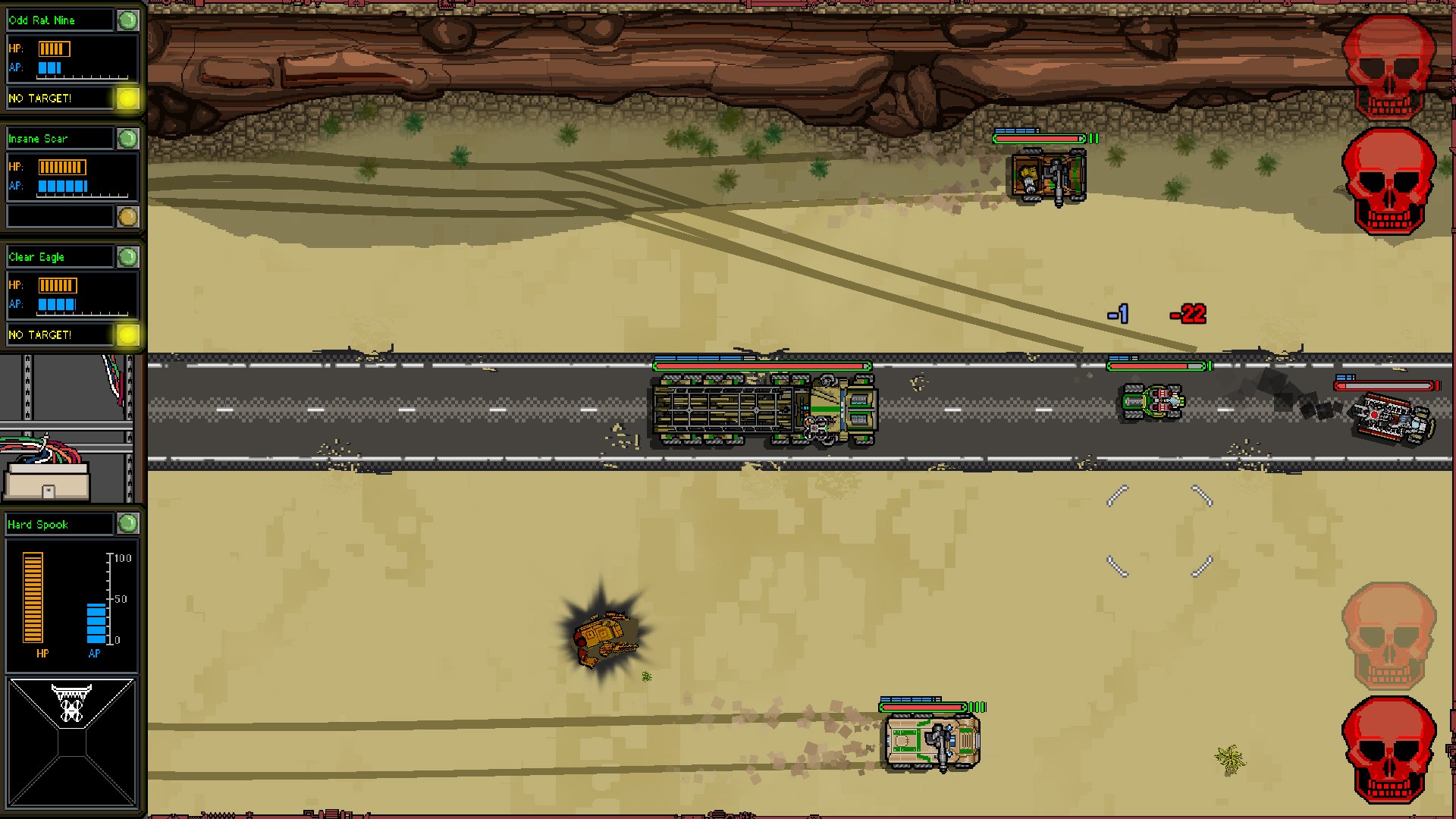 Combat in Convoy involved commanding your vehicles where to go and who to attack in real-time while enemy teams attack from all sides. Certain enemies have different strengths and weaknesses, so purchasing new technology and upgrading your vehicles is crucial to survival, especially in the mid to late game. Some enemies build large, defensive vehicles while others prefer glass cannons that need to be taken out before causing too much damage. Various obstacles lying in the road make paying attention to every aspect of the battle necessary if you don’t want to lose a car to an easily avoidable crash.

Aside from combat sections, you will need to navigate the over world to find the right parts for your ship. Different areas are controlled by various factions and signals are scattered across the landscape. Finding these signals reveals anything from a new quest, an enemy attack, treasure, or an RPG style encounter. Quests can range from sweet old ladies secretly working for bandits all the way to a deranged knight searching for a dragon to slay. With dozens of signals scattered across the planet, you will never find yourself bored searching for something to do. 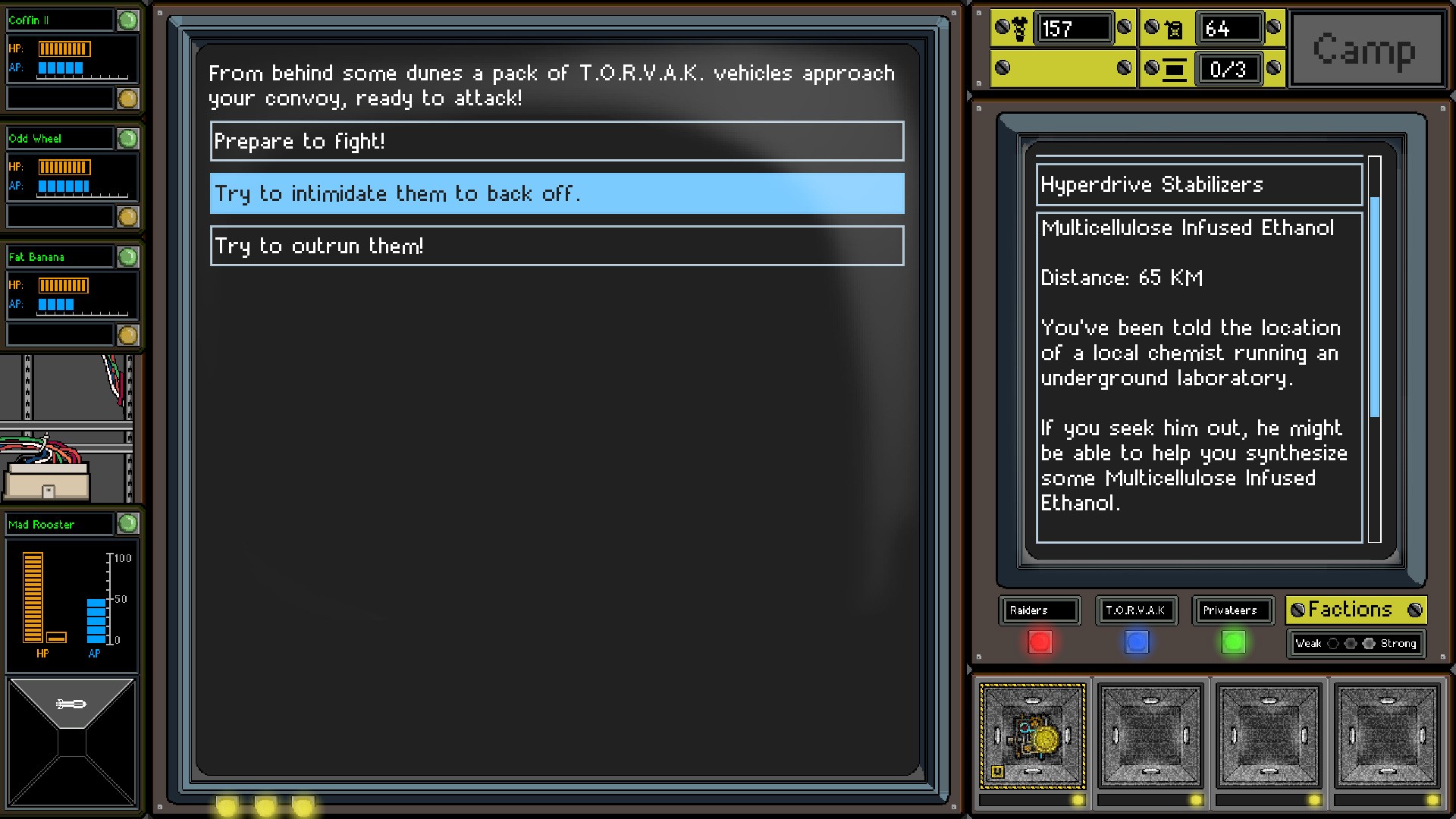 Visually, Convoy is presented in full pixel art and set in a futuristic post-apocalyptic wasteland. Combat environments are visually distinct, ranging from deserts to roads to rocky mountains and each poses different risks and challenges. Vehicles are unique depending on which faction they work for and they often appear significantly more worn and modified than your more advanced vehicles. This gives each faction a distinct personality and implies a history among the different factions that we, the player, weren’t around for. This is especially true when fighting the bandit-like Raiders, who supposedly cannibalize the vehicles of their enemies. Thus, you may face a rag-tag band of Raiders with weapons stolen from the more technologically advanced TORVAK or the Privateers. These small details make the simple world of Convoy feel large and organic while also providing new and unexpected challenges and gameplay opportunities.

Convoy: A Tactical Roguelike does nothing particularly new when it comes to gameplay, but the mechanics and ideas taken from other games are used to great effect. While very similar to FTL, certain aspects of Convoy are simplified, like the combat, while others are given even greater focus, like the exploration. While the story of your crew searching for parts to repair your ship isn’t itself very exciting, the side missions and random encounters will more than makeup for the lack of originality in the main quest. Convoy is a fun, challenging, and humorous addition to the library of any fan of roguelike or real-time strategy.

Convoy: A Tactical Roguelike is a top-down squad-based strategic roguelike heavily inspired by FTL: Faster Than Light and the Mad Max franchise. In Convoy, you’re starship has crash landed on the wasteland planet of Omek Prime. You control a team of combat vehicles traversing the irradiated surface in search of parts to repair your ship.