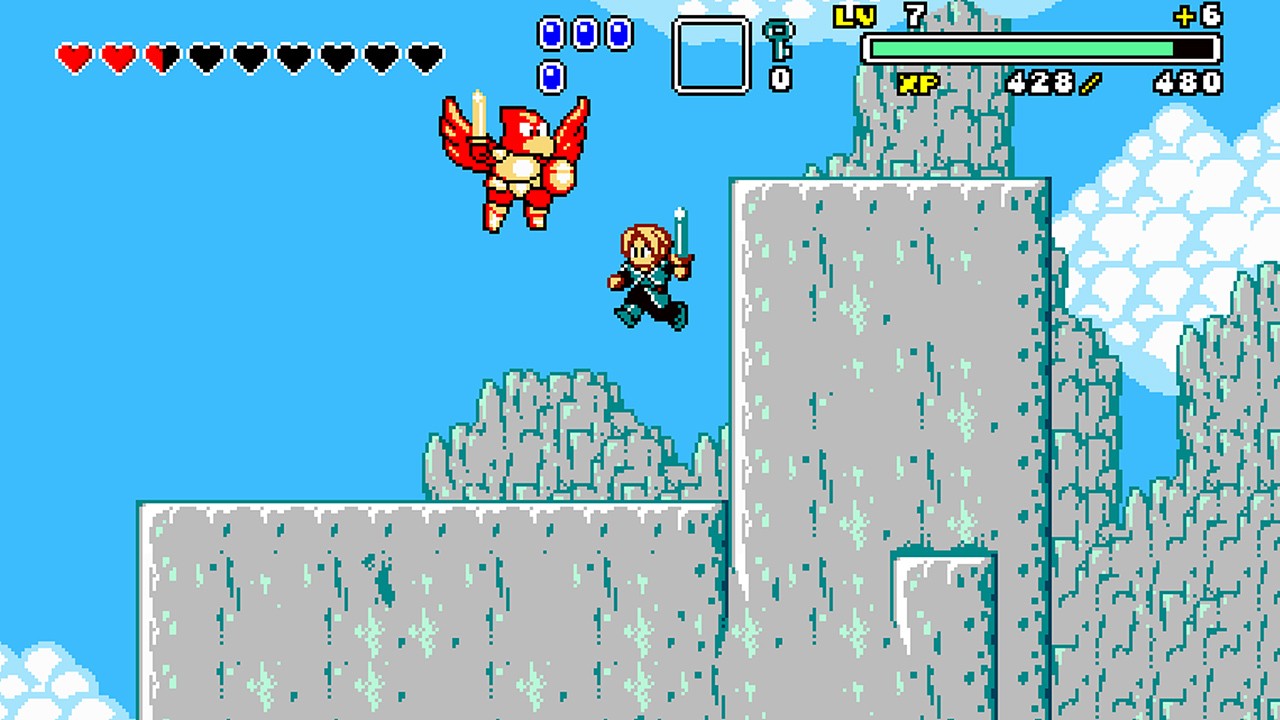 I really love Metroidvania games. The worldwide gaming market is saturated by them, but sometimes we can find some hidden gems in this genre, especially when it comes to the indie ones. Aggelos is an 8 bit inspired game with a lot of similarity to the Monster or Wonder Boys’ franchise, as the level design and the main protagonist are visually very close to it.

Aggelos was developed by Look at My Game and I’m already considering it one of the best Metroidvania 8 bit styles that I’ve ever played. By the way, just for the curiosity of those who like to play the “game developer”, this game was made using Multimedia Fusion, a 90s well-known software that was capable of making really cool games, which I used a lot when I was younger just for fun, and because I wanted so bad to be a game designer.

Aggelos it’s a super cliche game, where the developer decided to put all his bets in the most comfortable formula possible, using the common choice of a silent hero who starts his journey being called to a “great adventure”. You already saw that before, didn’t you? 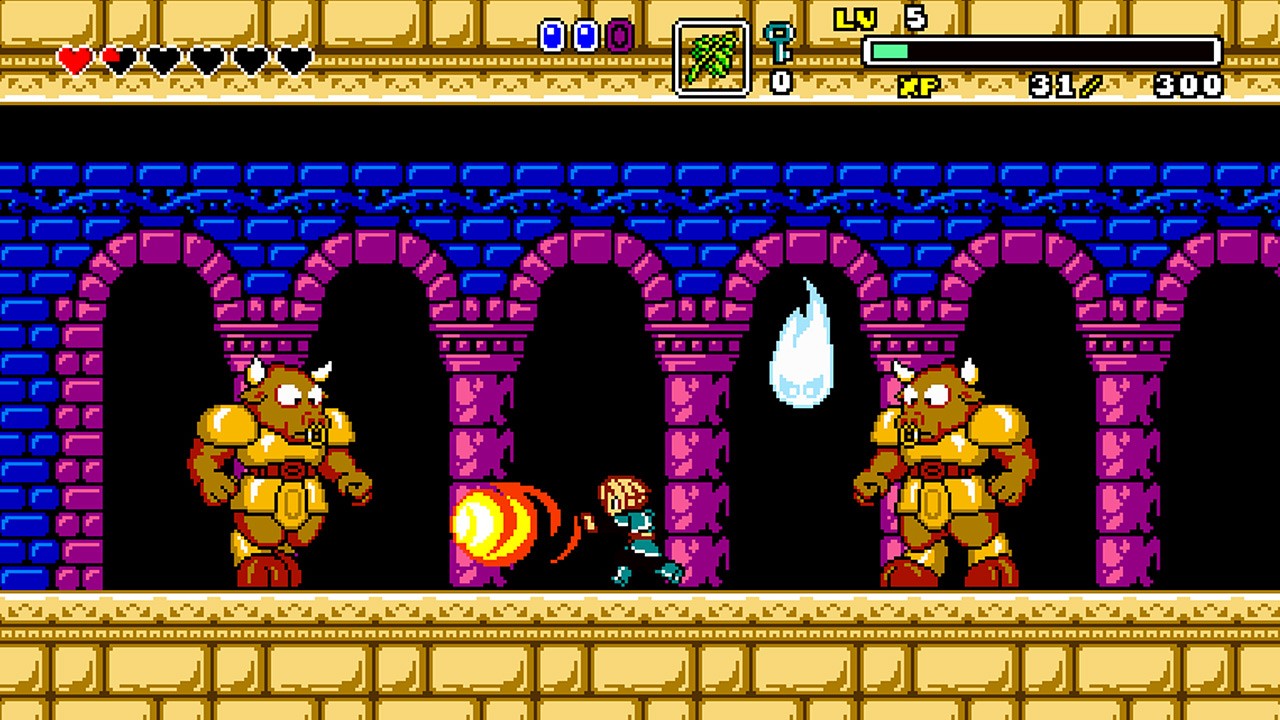 Every storyline is told through simple white texts placed on black backgrounds, while the characters keep standing still – however you can face this as a tribute to the 8 bit games, so you begin your journey with no deep explanations, and your main objective is to go after a quest in search for a mysterious voice. Suddenly you find an endangered girl, being attacked by a monster (beautifully designed, I got to say), who needs to be saved.

At the end of this rapid cutscene, the girl is revealed as a princess who needs to go back to her castle, so you need to get into this castle and warn her father, the kingdom’s king, about the situation to send soldiers to escort his daughter safely home. After some events and bringing back the girl, the king gives you the mission of stopping a villain named Valion from opening a dimensional hole. That’s all about the main story of Aggelos. A simple, clear and direct plot. And, honestly, all you will need is this, because this genre is totally gameplay-based – and this is not a complaint.

Particularly, I have some issues in accepting the fact some designers simply don’t spend efforts to explain certain in-game elements, and it’s even worse when they clearly seem to use lazy solutions to justify its limitations – hi there, invisible walls. However, Aggelos does everything so seamlessly that you won’t be mad about the nonsense floating platforms or stuff like that. Ok, the protagonist breathes underwater, but let’s ignore that because this game rocks.

When it comes to the overall design, I simply love how the enemies have cohesion with the scenario, and thus I don’t have the feeling that characters and enemies were made from different people, for example. Every single thing gives you the feeling that was made with passion and kindness, unlike some other games that seem to be made of mixed premium assets. 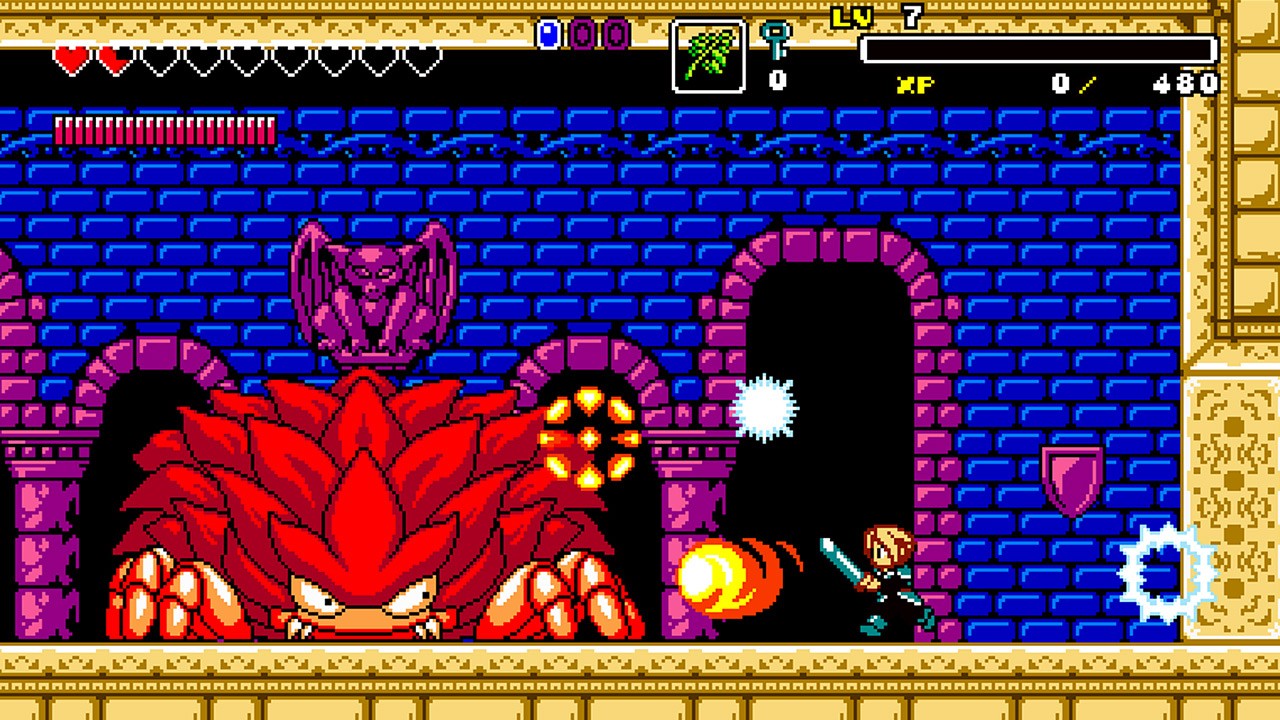 Now talking about Aggelos in general, you clearly notice that it has a Metroidvania approach due to the backtracking, story-driven gained skills and purchasable items. Also, the game offers a very pleasant exploration that I wasn’t feeling anxious about travelling long distances to accomplish my tasks. The map is extremely useful here and there are a lot of monsters to fight between some road and another, giving you great stuff from the battle. Also, the sense of accomplishment is constantly felt, and that’s because the game is totally comprehensive putting itself in the player’s shoes and don’t even try to hold back the progress through useless quests or decreasing the number of checkpoint areas – you can even equip an herb that gives you a second chance to live. Aggelos is kind and offers enough freedom to play with your very own rhythm, thus it is possible to gain new skills and fantastic equipment in just a few minutes of gaming.

Hey, don’t get me wrong: Aggelos isn’t an easy game, but it’s a well-designed masterpiece which any player can pick up and have some fun whatever his skill level is – from the newcomer to the hardcore one. Basically, you can do your own difficult thing, being a more curious person or just ignoring every single enemy, focusing on your main task. If you’re a fan of this mix of Metroid and Castlevania, you certainly should try it.

Aggelos is a well-designed 8 bit style Metroidvania, which does a great tribute to great classics like Wonder Boy.