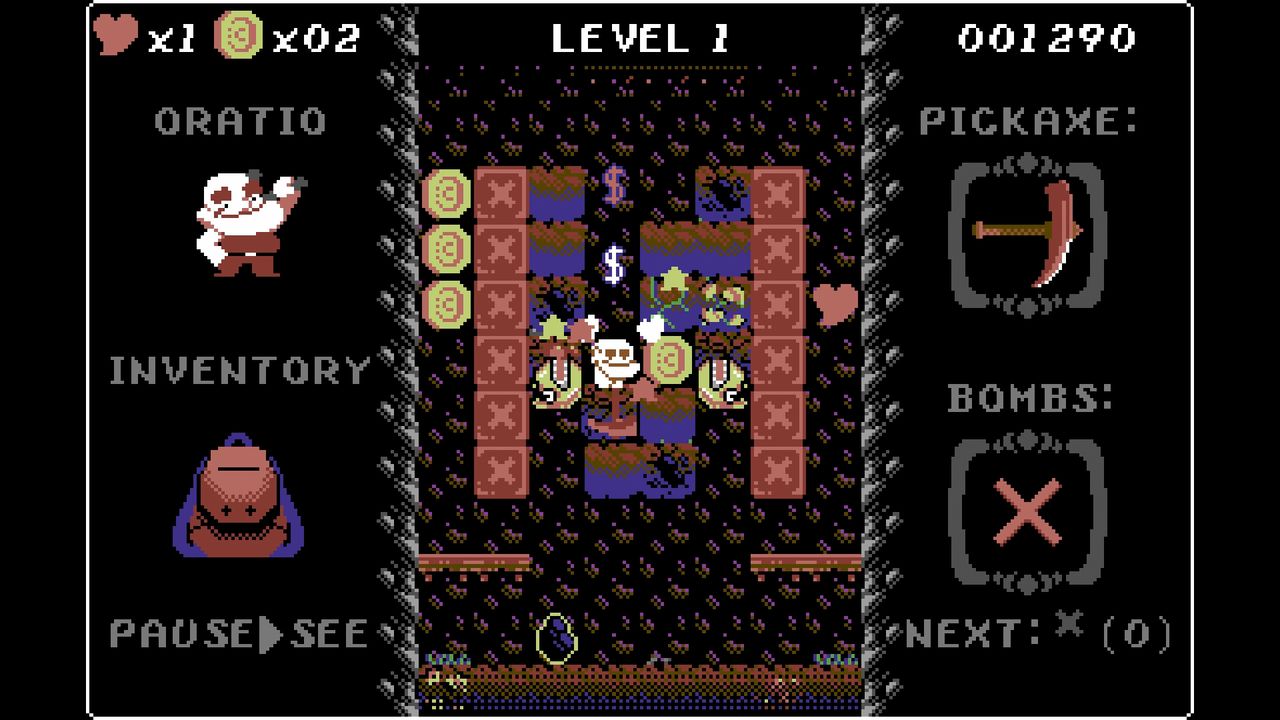 One massive mistake that we make – as artists, as creators, as simple human beings – is to compare ourselves to something greater. Never did the Beatles receive so much criticism as when someone declared that they were bigger than Jesus. When any indie band decides that they favorably stack up to another, more prominent musical group, they invite fans of both work to contrast, and point out, with painful accuracy, just what is different or lacking between them. For the small group of Panda Indie Studios (and EastAsiaSoft), they’ve been pretty good about keeping the comparisons low and trying to simply publish while touching upon multiple genres. But with their latest release, Pity Pit, they open the doors with the simple inclusion of games they feel are in the same vein: “Dig Dug meets Downwell”.

Now, from the get go, you can see why they might call these comparisons together. Pity Pit is a mostly plotless game in which you play a character called Oratio, who is going down a very deep mineshaft after what appears to be a massive demon with wings. This is the Devil, and he’s apparently kidnapped your wife, Gwendoline, though you would never have known that from watching the title screen or simply playing the game (you’d piece it together by the end). Oratio has to descend through several levels of terrain and enemies while also dealing with a forever incoming collapse, which forces you to keep moving and not dawdle on your dig down. The concept is simple, though the execution is, interestingly, more complex.

With Pity Pit, Oratio has quite a few moves to consider. He can dig into the surrounding soil to the left, right and down (never up). Oratio can also jump, which makes the path he takes never the final one unless he digs himself into a situation. You attack enemies with the same button you dig with, and, if you can find them, you can set off bombs that clear out as many rock tiles as possible and also damage enemies (and Oratio himself, so be careful). In this regard, there’s a complexity to Pity Pit that you have to work out, both in terms of expectations and in terms of actual controls. The splash overlay when you start told me how to dig and bomb, but not how to jump: I stumbled on that button by accident after my 13th rotten run, so I wish I had known jumping were a possibility from the get go. 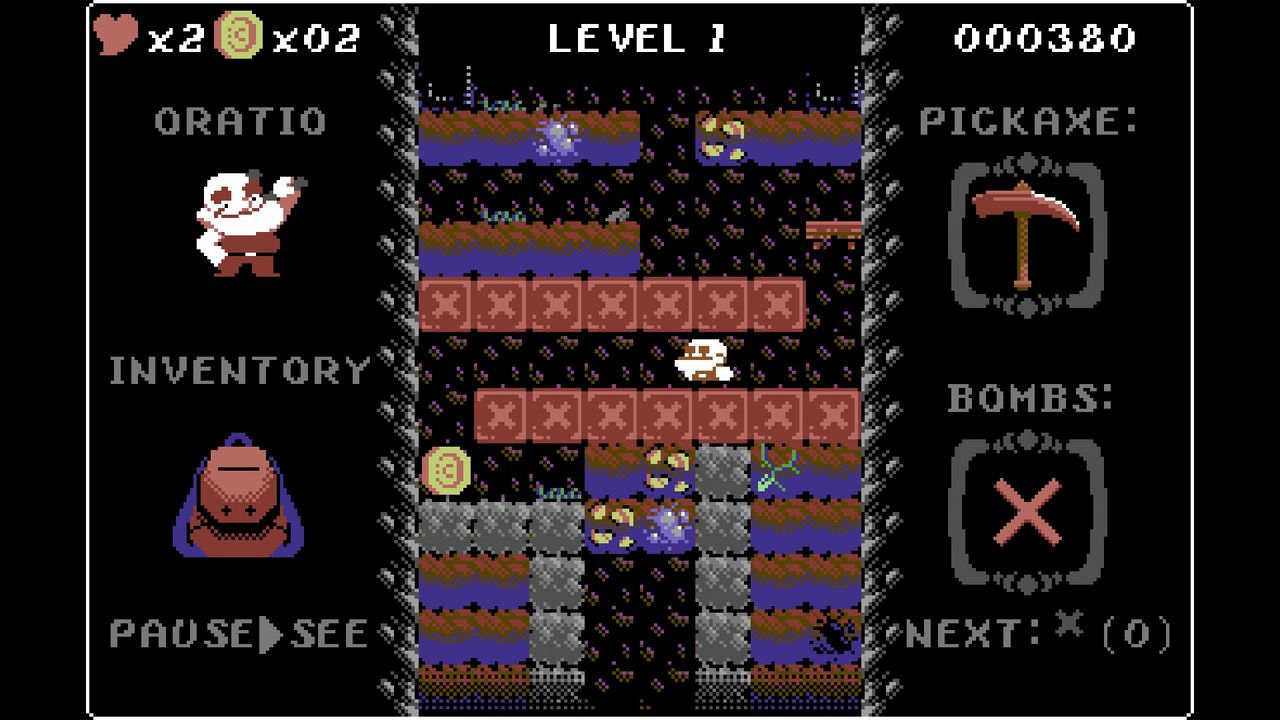 Also, Pity Pit has a lot going for it in terms of customization and upgrades. Not only is the floor layout randomized upon starting, there’s more to it than just dirt, rocks and enemies. Hidden within the soil are different items to pick up: coins, copper, coal and iron, to name a few. The coins can eventually be used to purchase upgrades (and more health, which is critical), and the raw materials are used to manufacture things at a forge that appears once per floor. In this regard, you have control over your upgradable destiny, and that’s rather spiffy and interesting. Also, it creates incentive decisions for whether to work on speeding down as fast as possible, or to try to carve out time to explore slightly new gather as many materials as you can. Granted, this won’t always be possible: not only are there certain blocks that you cannot dig through, the omnipresence of enemies and the collapsing ceiling do prevent longer bouts of collecting.

Amazingly, that’s not the end of it. There are also randomized upgrades that appear each floor, and you have to dig through some heavy duty rock in order to get to them. While some of the upgrades are rather paltry (an extra heart, a specialty bomb), there are some power ups that change the whole dynamic. The awesome shovel that can dig through two layers at once. The ability to jump even higher, turning the underground into your playground. Or the coveted “be stronger” upgrade, which shaves off at least one or two digs from denser materials, allowing you to tunnel at the speed of light. It’s an essential upgrade, especially once you clear the baser floors and start to encounter more difficult enemies who use projectiles and more complex movement patterns that you can’t navigate around I applaud Pity Pit for crafting these extra nodules of excitement and randomization, because, frankly, it’s this sort of detail that kept me playing after I was pretty sure I knew the game forward and backwards. I wanted to see if it had anything else to offer. 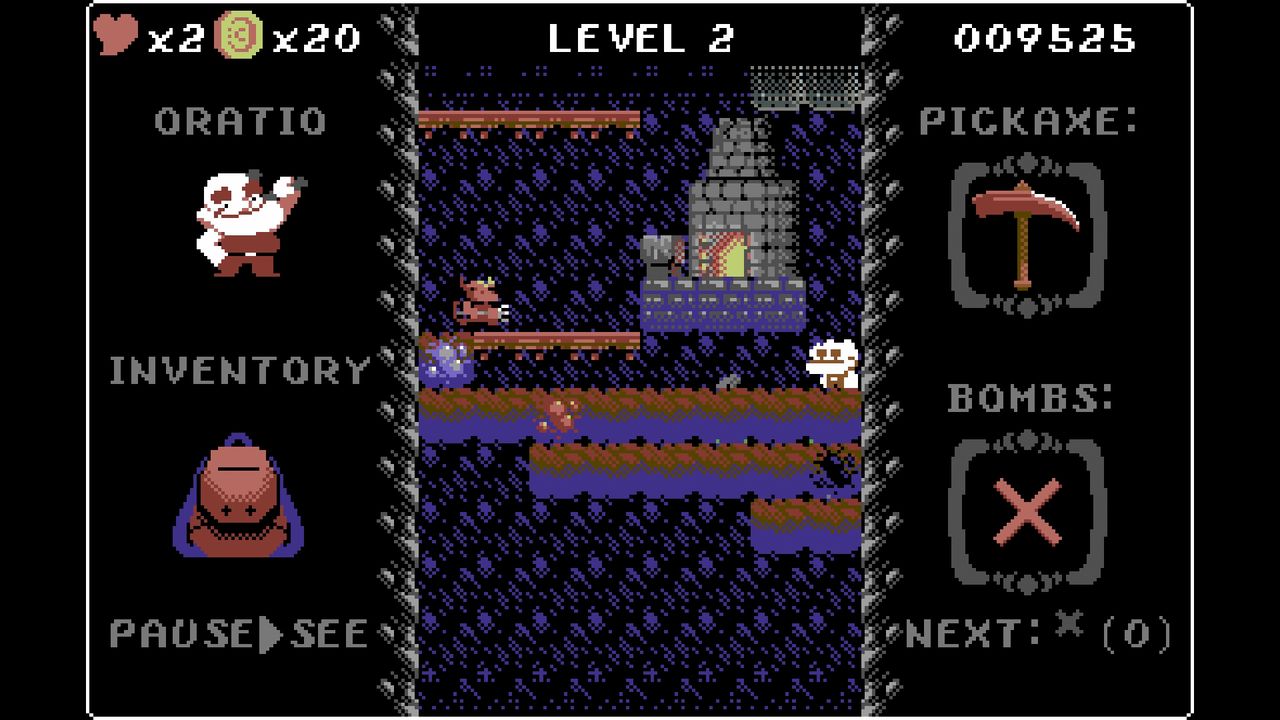 However, it can’t be ignored that this game sells itself as Dig Dug meets Downwell. Other than being underground, it’s definitely not Dig Dug. Pity Pit has you engaging with enemies directly, focusing on survival and potentially killing enemies for coins instead of doing so for high score and to clear the level. You can ignore enemies all day long and not have your progress hampered (though it’s near impossible later in the game). And as for the Downwell comparison, Pity Pit is missing a bit of the charm that came with the simplistic, strong execution that Downwell had. For example, Pity Pit has a static colour palette for everything that also appears a bit washed out: in an attempt to really harness the retro nature of it all, Pity Pit doesn’t so much feel like an old school game as a game that went through the wash too many times. Additionally, Downwell plays out in these smooth, fast-paced fashions that invite gravity and speed to be key factors in your victory, falling more into the arcade sector than anything else. Pity Pit has some smaller moments of speed, sure, but it’s actually pretty slow in comparison. You constantly need to dig, and enemies that go past you no longer become threats, which is a much easier life to live than Downwell. I would say there’s more of a Mr. Driller mentality here, but that’s just one player’s opinion.

The only thing that really irks me about Pity Pit is that it’s woefully unoptimized. For a game that’s fairly simple and small (and also can be finished in about a half hour or less), you’d expect the game to sing all the way through. Instead, you get slowdown moments anytime the ceiling appears on the screen, or if Oratio takes a hit while two or more enemies are on the screen. These jerky moments of dropped frames were so frustrating, and it took me out of the moment heavily, especially when it resulted in me taking additional hits (or taking the first, in the case of the ceiling’s interruptions). It’s a feeling that makes you shake the console in frustration, and it’s for a game that’s already balancing on the knife’s edge of if it’s worthwhile or not. It’s simple but fun, repetitive but expansive, clever yet strangely dull, and it doesn’t have a soundtrack that really clicks with the player at any point. When you’re looking at the lists and “performance” shows up for a game that should be able to run on the 3DS with zero issues, you can’t help but get very concerned and taken aback.

Yet, if you are a fan of this sort of game – the procedurally generated arcade game with more substance than meets the eye – then I can say that Pity Pit is a good recommendation. I had a fine time playing it, and I really got drawn into having Oratio run through the motions again and again. The initial load is long, but respawns are fast, and there’s variety in each go: nothing feels recycled automatically. It’s not as good as I’d like it to be, but it’s better than it might have been, and that’s certainly saying something. If you’ve got the mind for it, I’d say grab a pickaxe and hit the bricks, literally.

It’s short, it’s sweet, it gets the job done and it does have plenty of fun moments: just don’t expect it to be what the developers claim it is.