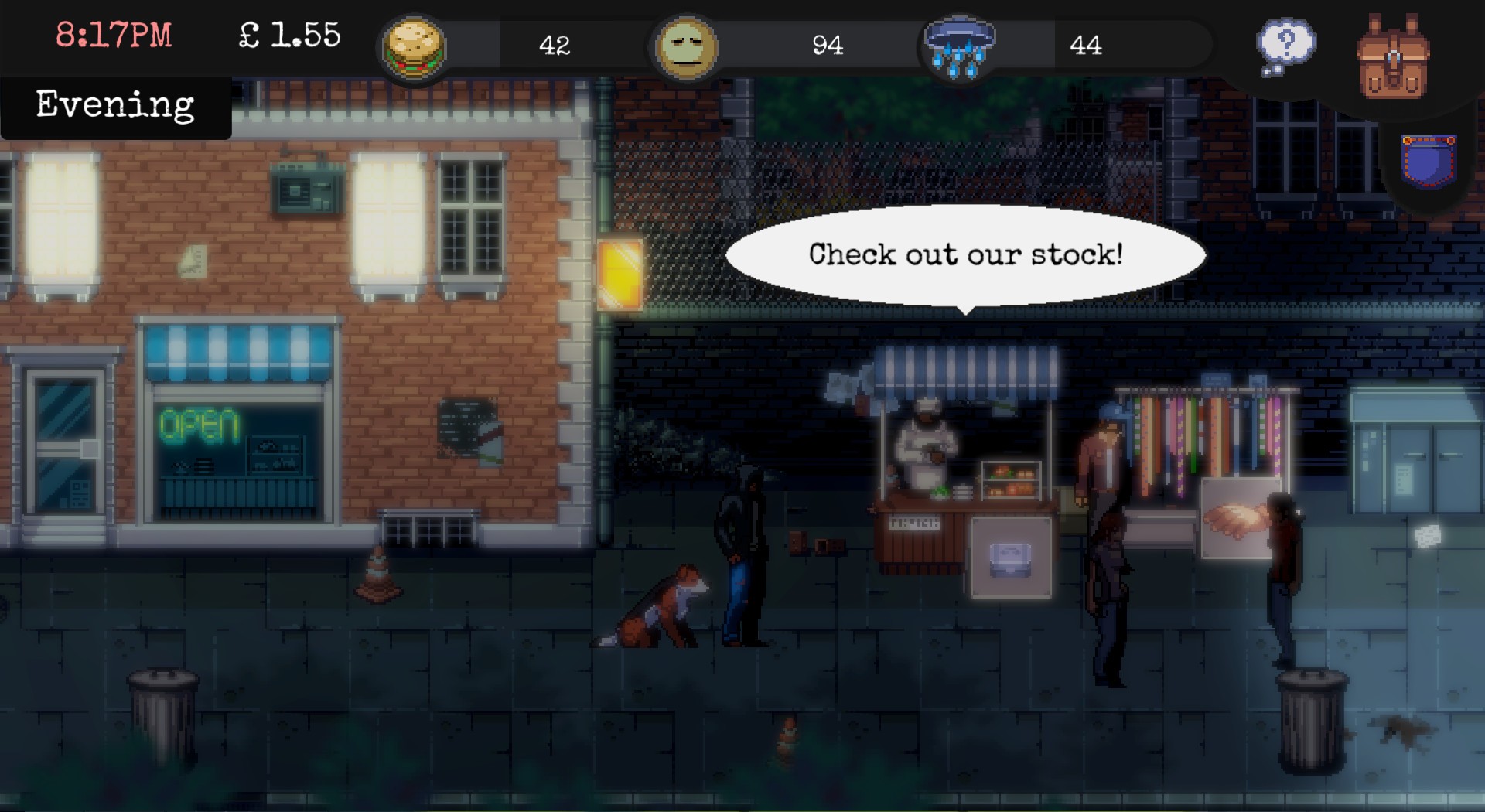 CHANGE: A Homeless Survival Experience was developed and published by Delve Interactive, which was released in May 2020 and received very positive reviews from the community.. It is a 2D side-scroller experience about surviving and facing the rough nature of being homeless. People have praised the title for being a slap on the face for those who aren’t familiar with the subject of being homeless. The game reflects upon real-life scenarios of what could happen when you’re homeless, and as far as I have seen; I think that it is a pretty tough experience.

When I first launched CHANGE, I really expected nothing that special. I thought to myself that it would just be another typical simulator game, and it really was. But the elements of this game still surpassed my expectations by far, and I think it was executed really well. Before I started playing, I had to select one of the few characters that was available in the game and saw that only one was unlocked. In order to unlock the others, I had to complete certain tasks in the game such as surviving for 12 days. Other than that, it also displayed some facts about the subject of being homeless. The difference between the characters are their appearance and the different backstories that they all have. The backstories will affect the gameplay and give you advantages or disadvantages in certain areas. 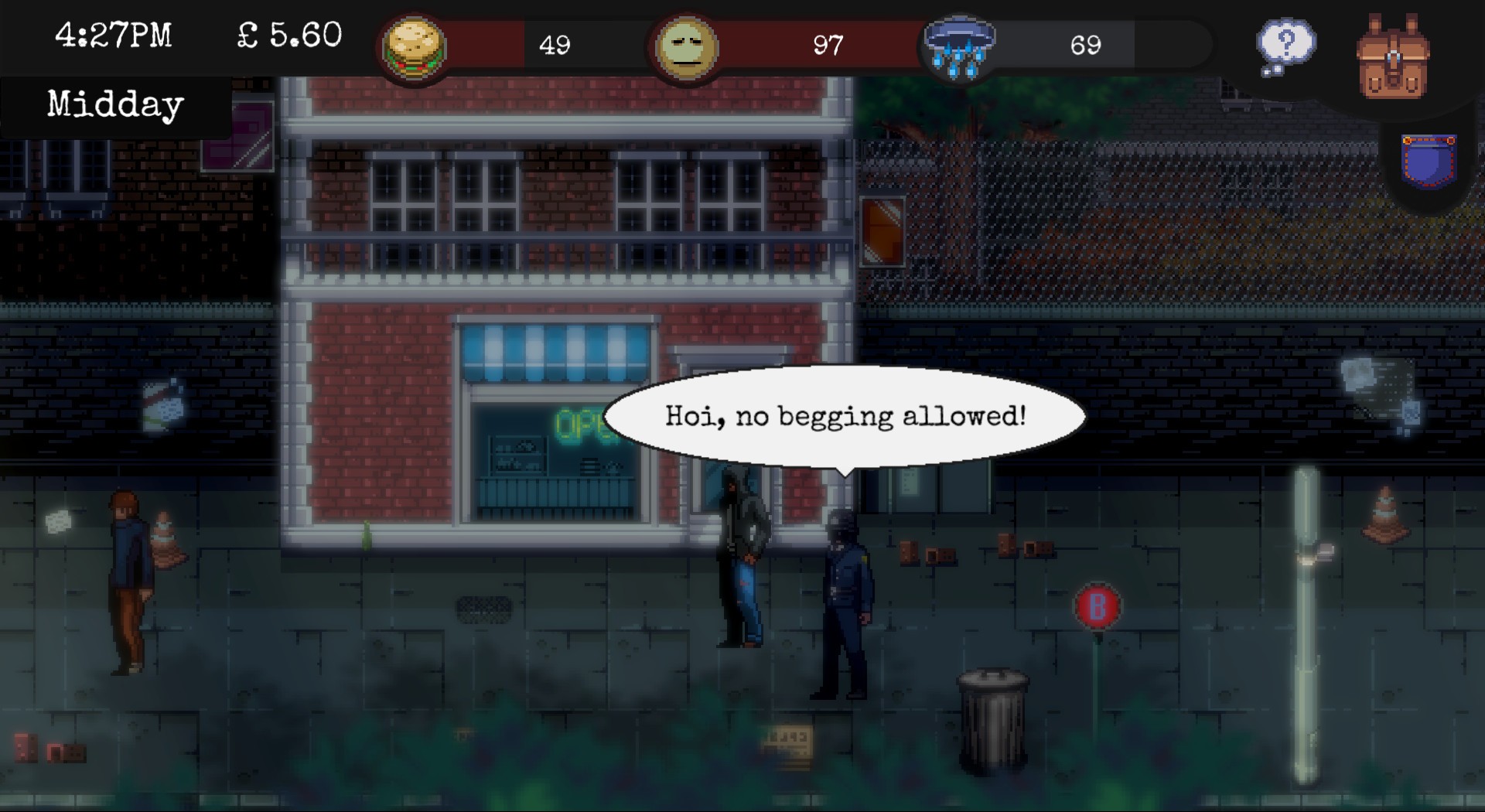 Once you’re in the game, you will find yourself in a really well-made environment that looks absolutely stunning. The scenery and atmosphere is really dark, which really gives the game a deeper setting. You can choose between walking left or right and as you progress, you will notice that you will encounter different things that you can interact with. It can be anything from the different buildings such as shelters, police stations and convenience stores. You can also interact with the people and things such as benches and scraps scattered around the area. You can use the benches to speed up the time of the day and you will also get a small amount of money from the people who has walked past you. You can pick up scraps in order to sell them in a recycling station. You won’t get much, but if you have enough scrap, it is a pretty good way to earn some extra money. You can also interact with the signs next to the road in order to accept a daycare job or take a bus to a specific store. Accepting a daycare job is one of the best ways to make money early on. But the more you demand as payment, the more risky it will be for you once you are there. The worst possible outcome is you being injured when you’re working, which will cause your character gaining a certain disadvantage.

To get a job, you will have to study in order to gain a certain level of skill so you can accept the job. Most of the jobs will pay you by the hour. Depending on the job, you may or may not make a lot of money each hour. When it comes to the shelters, you can rest for the day there and sometimes even gain a bonus by doing so! The bonus can be anything from gaining max hunger or receiving different bonuses. When you’re playing, you can also get into addiction when you start to smoke consistently. It will increase your happiness, but at the cost of you having to smoke every single day in order to keep up the happiness. When you attempt to overcome your addiction, you will have a rough time to get back on the track due to being under the weather for most of the period. 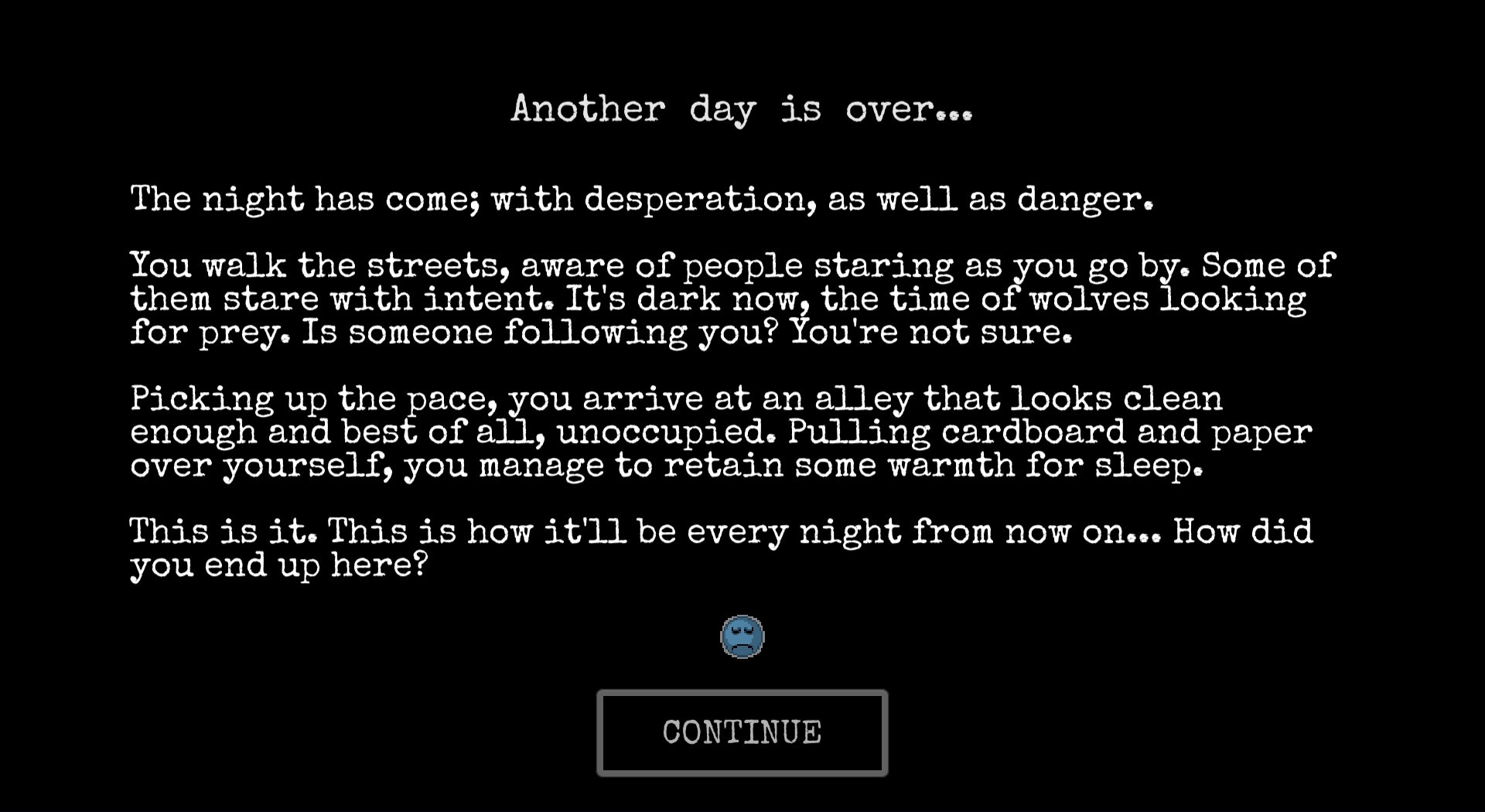 There is also a perk system in the game that will make you have an easier time doing certain actions. For an example, if you so happen to steal quite a bit you will notice that you will keep unlocking perks that will benefit your stealing more such as gaining more happiness when you steal. This also applies to activities you do in the game and not just stealing. You can also find pieces of clothing that will give you benefit on different things such as increasing your chances of stealing an item. Items and perks will really help you out once you have achieved a bunch of them! Other than that, your main goal is to get back on the track to a normal life.

CHANGE is a really challenging game if you look at it difficulty wise. Most of the playable characters are hard to play in their own way due to their different pasts. That being said, this will encourage the player to play the game differently and figure out new strategies. It also encourages the player to play the game again and relive the experience and approach it in a different manner. If you’re looking for an atmospheric game and don’t mind the sad settings, I would highly recommend CHANGE!

Basically, CHANGE is a game that really wakes you up and opens your eyes to make you see the cruel reality that we live in. Sometimes life can be a challenge for all of us, and no matter how hard it may be, you should always be optimistic and push on.

Basically, CHANGE is a game that really wakes you up and opens your eyes to make you see the cruel reality that we live in. Sometimes life can be a challenge for all of us and no matter how hard it may be, you should always be optimistic and push on.