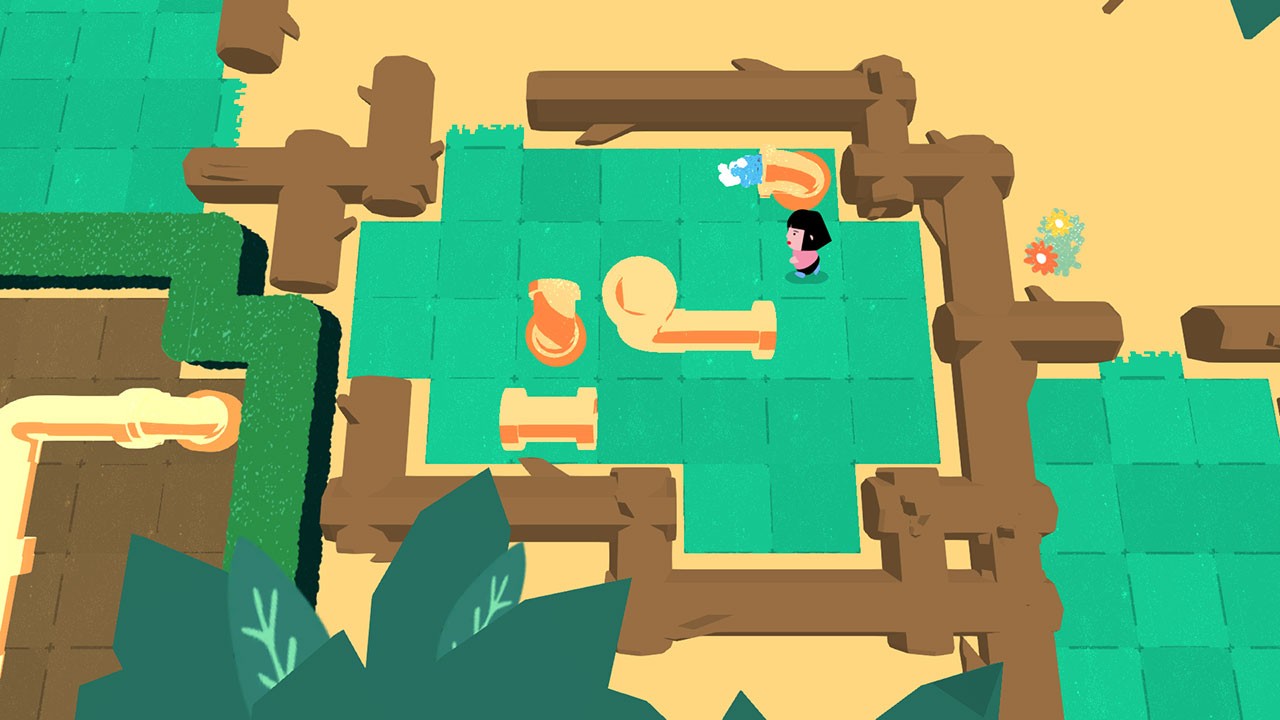 Puzzle games always require a delicate difficulty balance to make them not too hard to solve while still remaining challenging. They can’t be pure trial and error either; the player needs to feel like they are actually doing something, not just lucking out. While Pipe Push Paradise doesn’t exactly nail this, it comes really close to doing so, more than most other games. The theme of the game also helps it separate itself from others, being out there while not outlandish.

There is no dilly dallying around with a story in Pipe Push Paradise, after a little set up the player is thrown right in. The plumbing of an island has broken up and the main character’s uncle, the one supposed to fix it, has fallen into a deep slumber, leaving the protagonist alone to repair it. In between puzzles a few characters can be found and talked to in order to discover some backstory or just engage into little chin wags, adding more charm to the game. 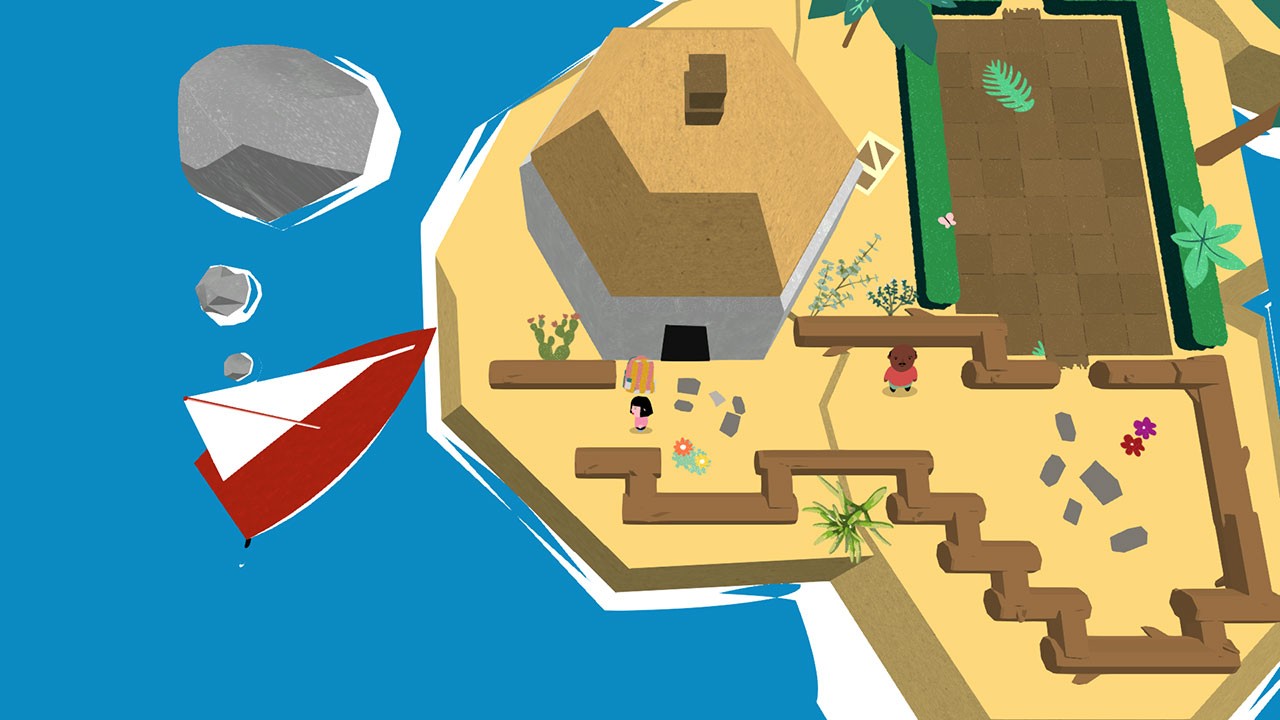 Graphics in Pipe Push Paradise are pretty good, with a colouring style that stands out from the norm. There are also several zones, though there is not much difference between besides the floor colour and the mechanics introduced. The previously mentioned characters also look different from each other while still maintaining a consistent and recognizable style, which is a pretty good job considering the limitations of said style.

The game’s soundtrack is an outlier; it is mostly composed of some guitar riffs combined with white noise from the sea, including long pauses. Its volume is also pretty quiet while undocked even when maxed out, while it is not bad per se, it definitely feels awkward. Luckily it is not the case for the SFX, with most being perfectly audible and doing a great job at representing the actions.

As mentioned at the start, Pipe Push Paradise doesn’t completely nail the balance between challenging and too hard, leading to a lot of levels relying on trial and error. That said, those that don’t rely on it leave the player with a feeling of fulfilment and genuine accomplishment. The main mechanic of the game is pushing and turning pipes around to make them fit in the correct places. To spice this up there are several gimmicks that appear later on, such as turning tiles or pits. The game also plays with level and pipe size, leading to awkward angles and barely fitting pipes. 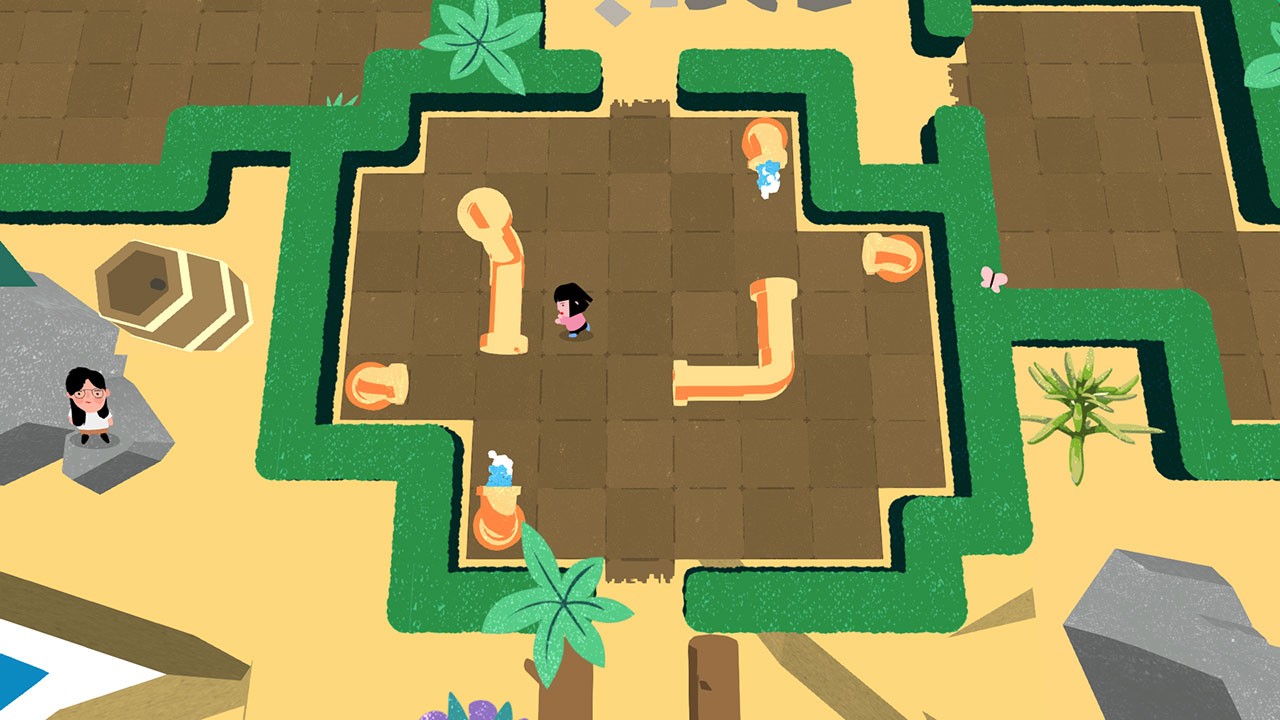 Controls in the game are not the best though, with the joystick making the character move really fast, leading to times where the player may accidentally move pipes and be forced to undo steps. While this is a minor inconvenience, it can end up piling up over time.

While the game is not perfect, it offers an enjoyable experience through and through, with some levels being especially well designed and offering a sense of reward. With 47 levels in total, the game features a length of about 8 hours. For the price of $10,99/€ it is a more than worthy purchase for any puzzle lover. The mechanics are simple enough for anybody to understand and get started, while still posing a challenge for those looking for it. Overall, Pipe Push Paradise is a very recommendable game.

Pipe Push Paradise is solid puzzle game with a good approach to its mechanics, though not without flaw. Some of the levels involve trial and error and may become repetitive.