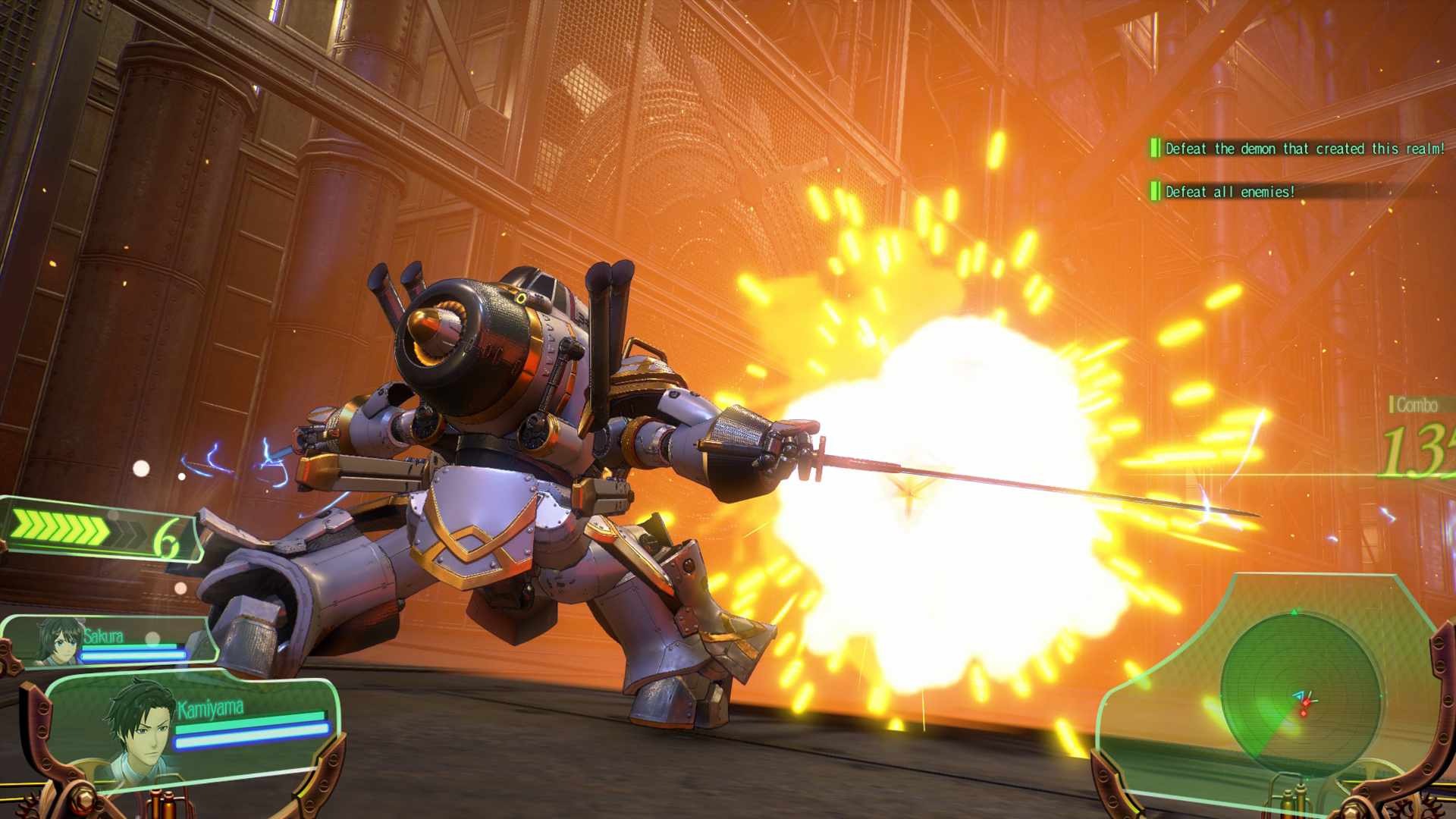 Like Azur Lane Crosswave, which came out earlier this year, the majority of what Sakura Wars has to offer is dialogue. While that’s not necessarily a bad thing, it may disappoint gamers looking for something along the lines of Armored Core or the Gundam Breaker series where you pilot a big mech and take on multiple enemies. More dating sim than anything else, Sakura Wars offers some combat–and what it offers is good!–but ultimately, any mech brawling should be considered a bonus and not a staple of the gameplay cycle.

Sakura Wars is set in a universe that’s in a weird time space where modern day meets past with a dash of steampunk. Our tale begins with the Imperial Combat Revue’s Flower Division, a team of three girls led by an Imperial Combat Revenue veteran and familiar face from previous games, Sumire Kanzaki. Their base of operations where they perform plays when they aren’t protecting Tokyo from demons, the Imperial Theater, has seen better days and is a far cry from the grandeur it once possessed. The girls can’t act without destroying a set and most patrons nowadays go to shows simply to ridicule them, the Spiricle Strikers they use to protect Tokyo are nearly derelict, and they have no funding to continue operation. Oh, and did I mention that they’re due to fight in the World Games against incredible talent with bottomless funding and stand to disband if they don’t somehow pull a victory out of their arses? Enter your character, Kamiyama, the fresh new captain who will miraculously turn everything around.

That’s a lot to unpack, so let’s talk dating sim first; AKA: decisions–the good, the bad, and the neutral. When speaking to any of the cast, you’re sometimes presented with dialogue options that you have to select, using the left stick to make your selection and x to confirm it, before the timer runs out. After some playing around with saved files, I’ve come to conclusion that, sometimes, there is no best or correct answer and in some instances, you’re only given one option which merely functions as a way to make you feel like you’re part of the conversation rather than just an observer. In some cases, your input is based on intensity using the same control scheme of left stick to select and x to confirm. These had interesting and sometimes unexpected outcomes because it isn’t always obvious what the intensity you’re adjusting was tied to. When Kamiyama is dressed as the theater mascot, Peanut, for example, I thought dialing up my intensity would make him cheer harder when in fact it was tied to how quickly he spun in place. At maximum intensity, my onlookers were amused by how quickly Peanut spun, while at medium intensity I was actually able to get some lines out promoting the theater, which also hyped them up. Both were positive outcomes, but I suppose it boils down to how silly you want to be getting there.

There’s a distinctly different chime when what you’ve said is taken positively or negatively and either will change the character’s standing with you– something you’ll only see in a quantifiable way during the game’s intermissions. As far as dialogue is concerned, only the immediate response changes based on how you reply and the majority of text remains the same. 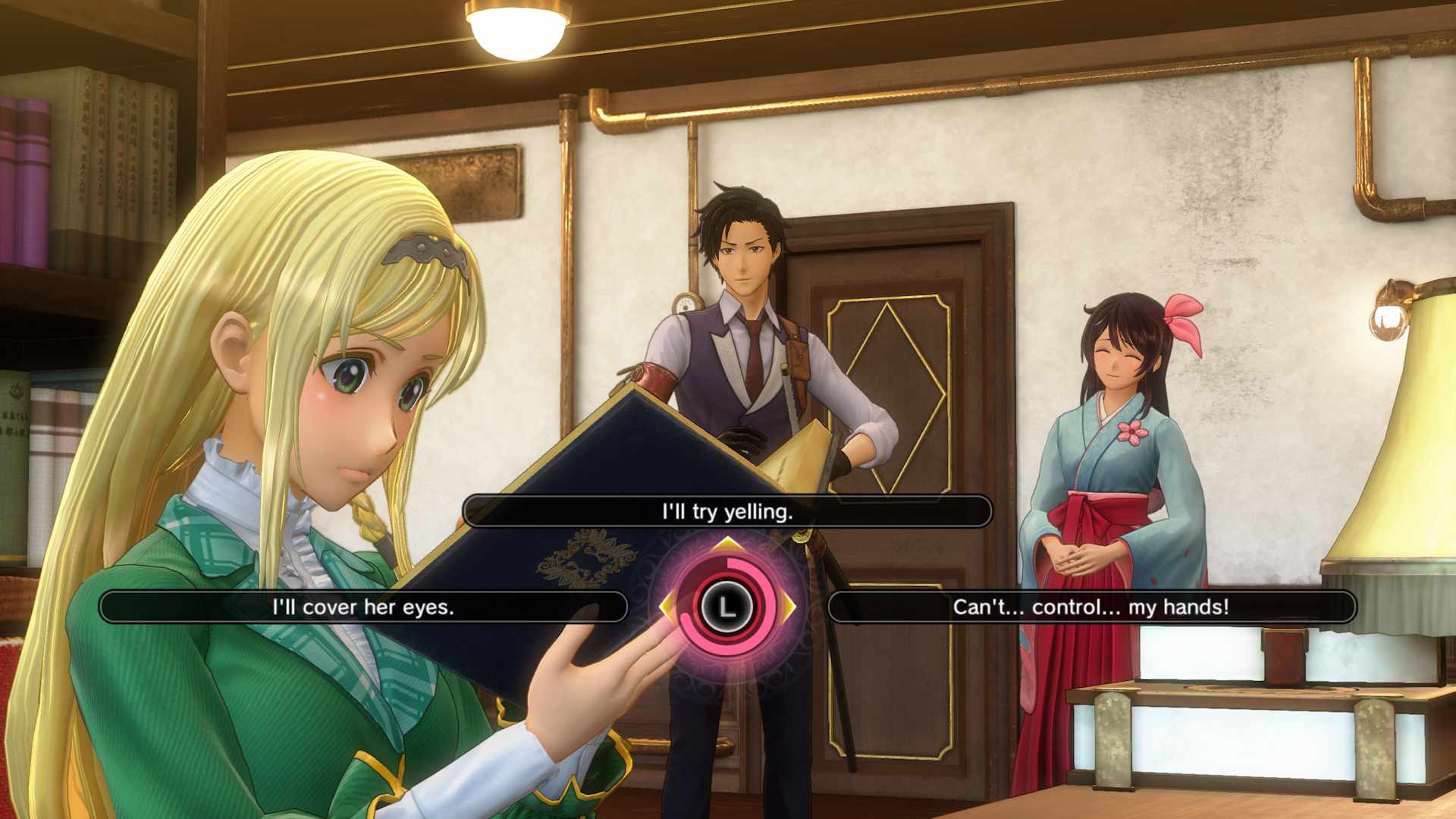 Speaking to characters helpfully marked with a blue exclamation point sometimes gleans side quests. These linear quests revolve around talking to specific people or going somewhere to fetch an item and were an overall tedious way to break up all the text and cutscenes. There were also timed events, which are nothing more than a minor irritation as there’s no real reason for the timer. This obnoxious frame around the top half of the screen fills slowly and prompts you to accomplish whatever you’ve set out to do ASAP and are one of the few times Sakura Wars doesn’t move at a leisurely pace so they felt forced and incongruous. Speaking to characters marked with green question marks will move the story along. It’s impossible to forget what you’ve been doing/should do because Sakura Wars tracks every task you complete and completed tasks are added to an archive along with any CGs you’ve seen in the interim. I’ve fallen victim to putting down an RPG for a period of time and then having no idea what the hell was going on when I came back, so I can appreciate this level of detailed notation where I can review every scene I’d already seen play out at any time.

Sakura Wars has loads of cut scenes, both cinematic and using the in-game character models, that you can’t speed through at your reading speed, but rather must listen to the voice-acted lines. This frustratingly compounds the plodding pace. Each of the 8 chapters the game is divided into are further segmented into four “movement” phases, and at the end of each there is an intermission where you can save your game and check your standing with the characters you’ve met. The problem with the scenes where you can read at your own pace is that finishing text early results in cancelling out the speaker’s animation. While this isn’t anything game breaking, it can lead to a disconnect between what’s being said in response to the action you might have missed. Fast readers like myself will simply have to wait or miss out as a result. The majority of Sakura Wars is voice-acted, there are some scenes where it’s strangely absent–particularly during some of the more heartfelt exchanges. I’m not sure why or how the developers chose what merited voice acting, but there were some strange decisions made.

As you get closer to your Revue-mates, you’ll unlock the ability to engage in a Tête-à-Tête. The idea behind these one-on-ones is that you’re supposed to interact with the correct objects and points of contact in the current scene in order to move the conversation along and sometimes this works well, sometimes it’s like taking a stab in the dark. When it does work well, you’re listening to what your conversation partner is saying and making replies based on clues you pick up from your surroundings. For example: Hatsuho was down and I knew that she had been receiving letters from her folks regarding returning home and taking over the family shrine. So, I clicked on the little mini shrine in her room which unlocked the ability to ask her if that situation was what was bothering her. When it doesn’t work well, you’re clicking on every object you can interact with in hopes of stumbling on something. Unfortunately, because these scenes unlock based on closeness, they sometimes didn’t gel with story events or decisions I’d made; i.e. a character felt useless even though we had just kicked ass in battle together.

Another activity available to you is a mini game called Koi Koi–and it’s utterly confusing. It utilizes Hanafuda cards and the object is to make pairs to score points called mon. Fortunately, the cards that can be paired are automatically highlighted, but without any idea of what I was doing, I relied on that and blindly selected cards from my hand. Maybe after some practice I’ll memorize what pairings are worth points, but until then there’s a definite learning curve. More opponents become available as you progress through the story, but the only significant reason to play is to unlock the related trophies as Koi Koi has no effect on any other aspects of the game. You can also explore Ginza, which is separated into nodes, but each area is fairly small and there are only a handful of NPC character models with not much to say. As a result the world, albeit pretty with all its steampunk trimmings, feels empty. 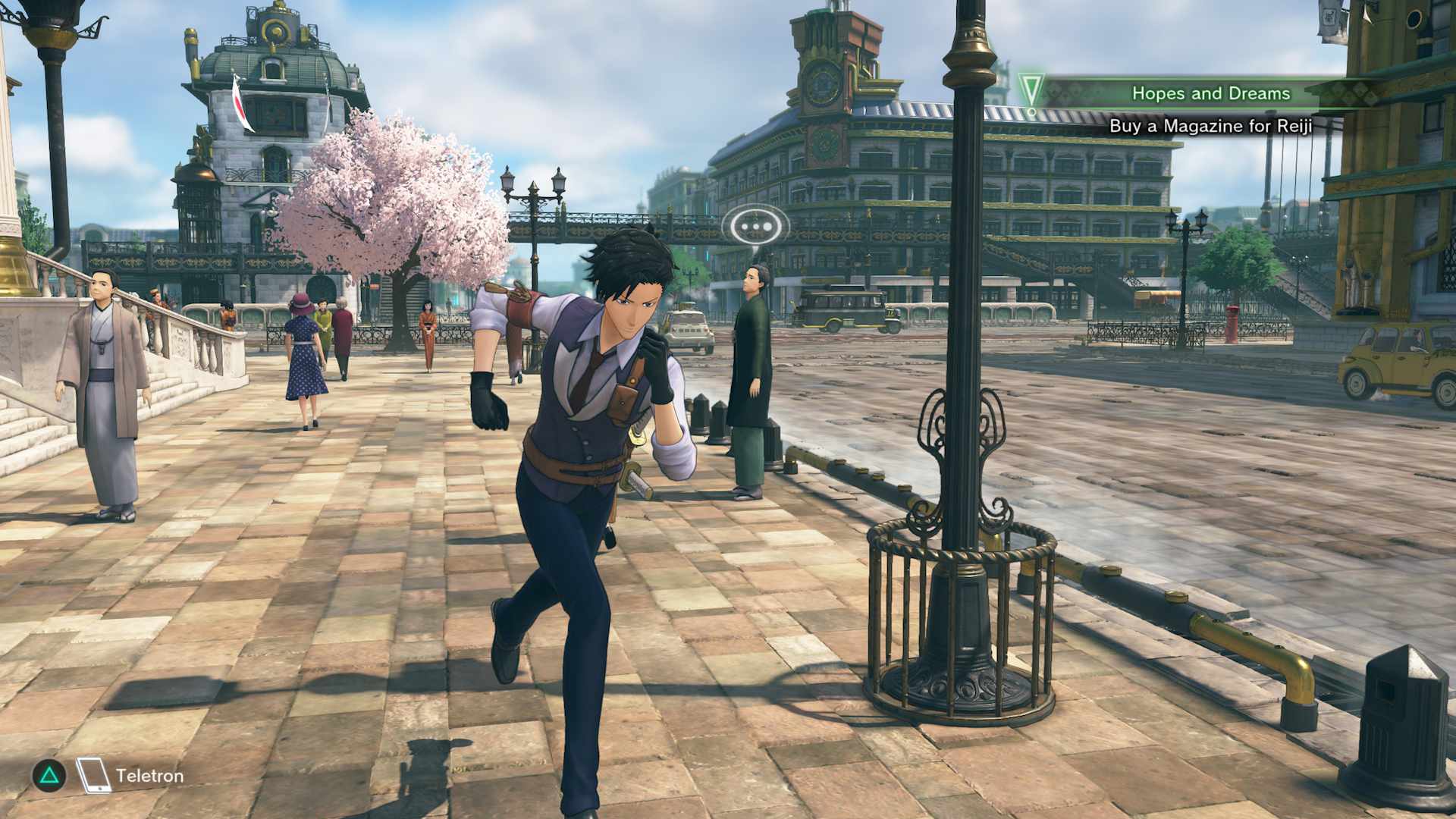 I was pleasantly surprised to find, after trudging through the initial hour+ of expository set-up, that combat was smooth and navigating the battlefield was smoother still. Those chubby little Spiricle Strikers can certainly dash and jump like no one’s business and different bots feel very different in terms of combos. That being said, combat isn’t without drawbacks. Battle isn’t meant to be lengthy, a fact made evident by the rating on your after- battle scorecard, and the difficulty level suffers as a result. Enemies only take a few blows to fell and you’ll face the same handful each time. Your special attack is broken, reducing multi-stage bosses to smithereens–even when facing against other Spiricle Strikers, which actually pose a challenge. A third strike against combat is the limited character selection. You’re assigned your partner and the only way to utilize the other members in your team of five is to play the exact same stage–you guessed it!–four more times. I would have been okay with how brief combat was if it was at least decently challenging, or even if it was present in greater variety, but unfortunately that wasn’t the case and the score suffered as a result.

Raising trust outside of combat actually factors into your allies’ strength. Team attacks can be launched with girls who have enough trust in Kamiyama. Battle Bot helps raise trust with characters. After gaining an S rank, can’t gain anymore trust. Bromides awarded for completing specific tasks. Can also be used to replay a mission you didn’t achieve a S rank in. Downfall is that you can only replay missions you’ve already done with different characters after the fact.

Bromides, in case you’re interested in padding out you’re already substantial play time, are an in game collectable. They can be purchased from the store in the theater once a movement and they can also be found littered around the world. I got into the habit of sweeping the theater before progressing to the next movement for fear of missing out. For the most part, they were hard to miss so long as I was keeping an eye out while performing my captain-ly duties.

Sakura Wars has an anime art style and tends towards being over the top in its delivery. The music is a great example of that; a spy espionage worthy strain accompanies you on the battlefield and every one of your potential waifus has their own track that plays when they’re present. The delivery is very much like watching an anime and I think that’s something that will appeal to some more than others.

My personal score? Probably a 7.5 because of my soft spot for dating sims and a likeable cast. More realistically speaking, Sakura Wars won’t be everyone’s cup of tea–particularly since it’s such a leisurely-paced, over the top tale. I’m happy to see another title set in this universe and, for some, that may be enough to look over the flaws in combat and pacing, but for others not so much. I’ll leave that for you to decide.