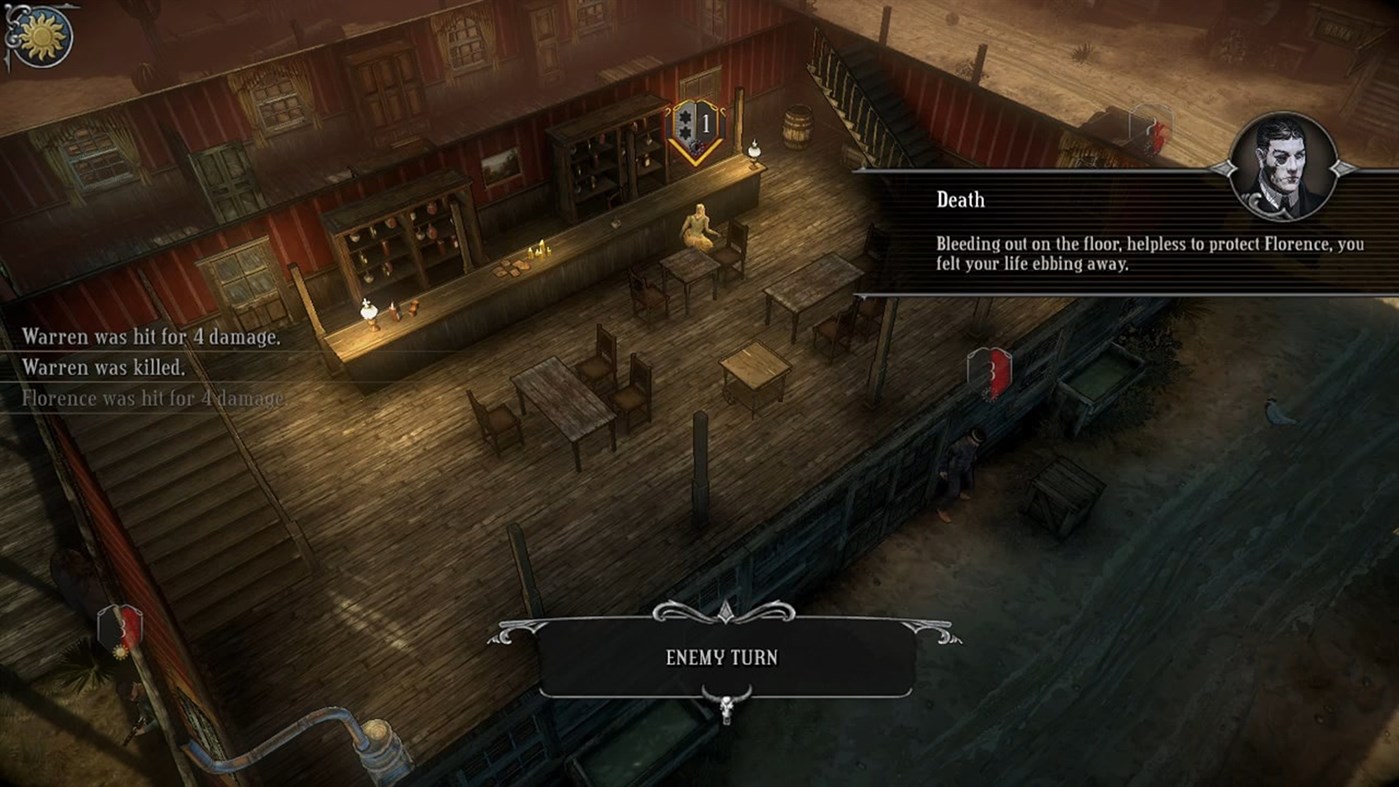 For many gamers, the turn based tactical strategy genre came into its own with the release of the critically acclaimed Xcom Enemy Unknown in 2012 and then revamped for the Xbox One in 2016 with Xcom 2. With the genre now firmly established, Poland-based CreativeForge Games (those of Phantom Doctrine and Blackthorn Arena fame) have now released Hard West: Ultimate Edition for the Xbox One. Envisioned as a gothic horror western, Hard West: Ultimate Edition utilises the familiar mechanics of Xcom and spice things up with a wild west horror setting and resource management elements bolted on.

The game offers eight unique scenarios, all set in the west and all pitting a protagonist against seemingly insurmountable odds. During the first and, in my mind, the most touching scenario, a family travelling along the Oregon trail are set upon by bandits who kill and decapitate the mother. Throughout this scenario, you’re tasked with setting up home, earning coin by mining gold and tracking down your mother’s killers. Your father falls victim to a curse and (yes, you guessed it) it’s your job to find a cure for him. During Hard West: Ultimate Edition, you’re constantly presented with multiple choice options that will determine how the story unfolds. Although this was a nice, thoughtful touch, we didn’t notice any discernible difference in combat following any decisions we made. Talking about combat, for anyone familiar with Xcom, the mechanics underpinning Hard West: Ultimate Edition will be instantly familiar. You have two moves per character and using power abilities will deplete your moves. The environment offers different types of cover, including items that can be hidden behind, but can still be fired through depending on line of sight. 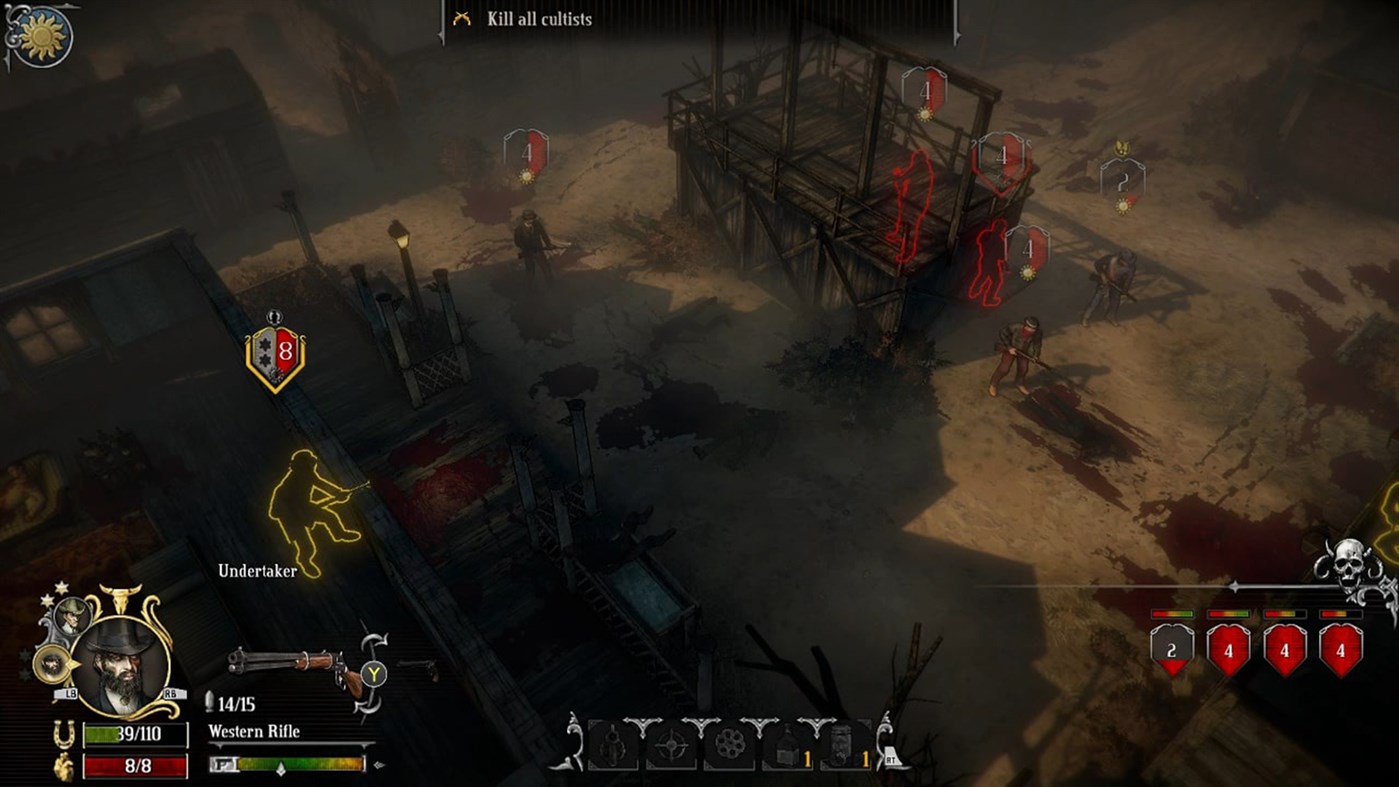 We were pleased to find that each of the scenarios allowed you to choose your own difficulty setting. These ranged from easy to normal and then hard. An ironman option means, if a critical character is killed you’re whisked back to restart the level from scratch.

Hard West: Ultimate Edition also mixes things up a little by providing you with ability cards that you can play during combat. The abilities on offer are a pretty mixed bag with varying levels of effectiveness. Our favourite has to be one that allows you to swap blood with an enemy and steal all of their health points. Another ability will force an enemy to scream and, consequently, rattle the nerve of their friends standing nearby. Hard West: Ultimate Edition also has an element of Luck in combat. In practice, this means if you miss a shot or the enemy doesn’t die from being shot, then their luck increases. Combat is also helped by the use of items such as health kits and bombs. These are assigned before the fracas begins with Hard West: Ultimate Edition offers two empty slots for items, two for weapons and one for armour. 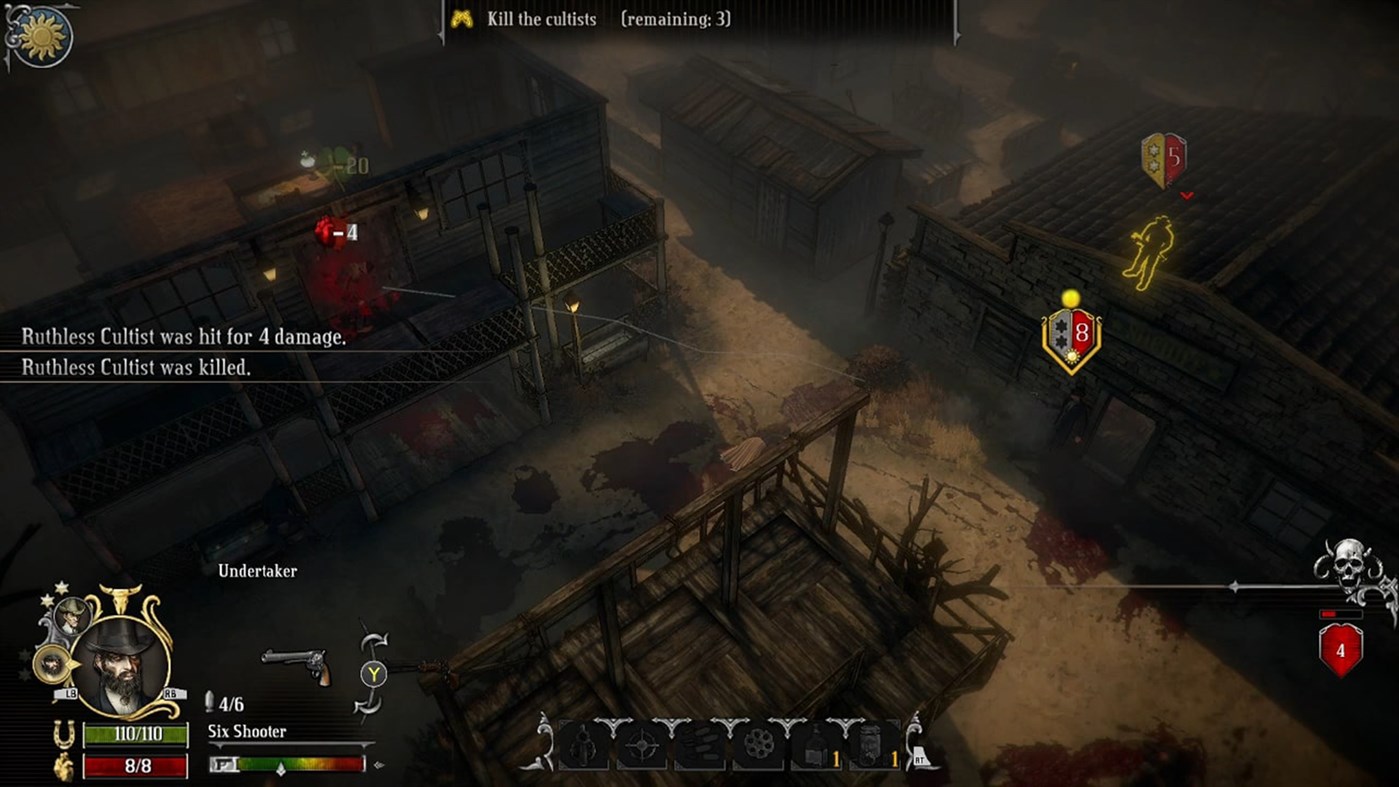 Graphically Hard West: Ultimate Edition is not the prettiest game on the Xbox One, but does a pretty robust job of creating varying maps and scenarios. As a hybrid between table top adventure and RTS, there are virtually no frame rate issues and each environment is filled with objects to navigate or take cover behind. Although the maps are relatively smaller than those in Xcom, many of them contain buildings with multiple floors, all of which have to be explored if you want to take out the bad guys. It’s worth noting here that, while Xcom offered a handy audio indicator to tell you where the bad guys are located, Hard West: Ultimate Edition refrains from this. Rather, you have to explore every inch of the map if you’re going to make any progress. Luckily, your enemies will stay put wherever they’re hiding and will only become active once you’ve found them. As a side note, one minor gripe we had with the multi-level design of some buildings was that it could be a little finicky trying to get the cursor to stay fixed on the right floor. This could be a bug, or it could just be the way we were playing the game.

With some 12 hours of gameplay plus an additional five offered by its Scars of Freedom DLC content, Hard West: Ultimate Edition is an engaging and challenging take on the tried and tested Xcom formulae. If you love the Wild West, and have a penchant for Gothic horror and a dose of strategy, there isn’t anything else on the market quite like Hard West: Ultimate Edition.

If you love the Wild West, and have a penchant for Gothic horror and a dose of strategy, there isn’t anything else on the market quite like Hard West: Ultimate Edition.