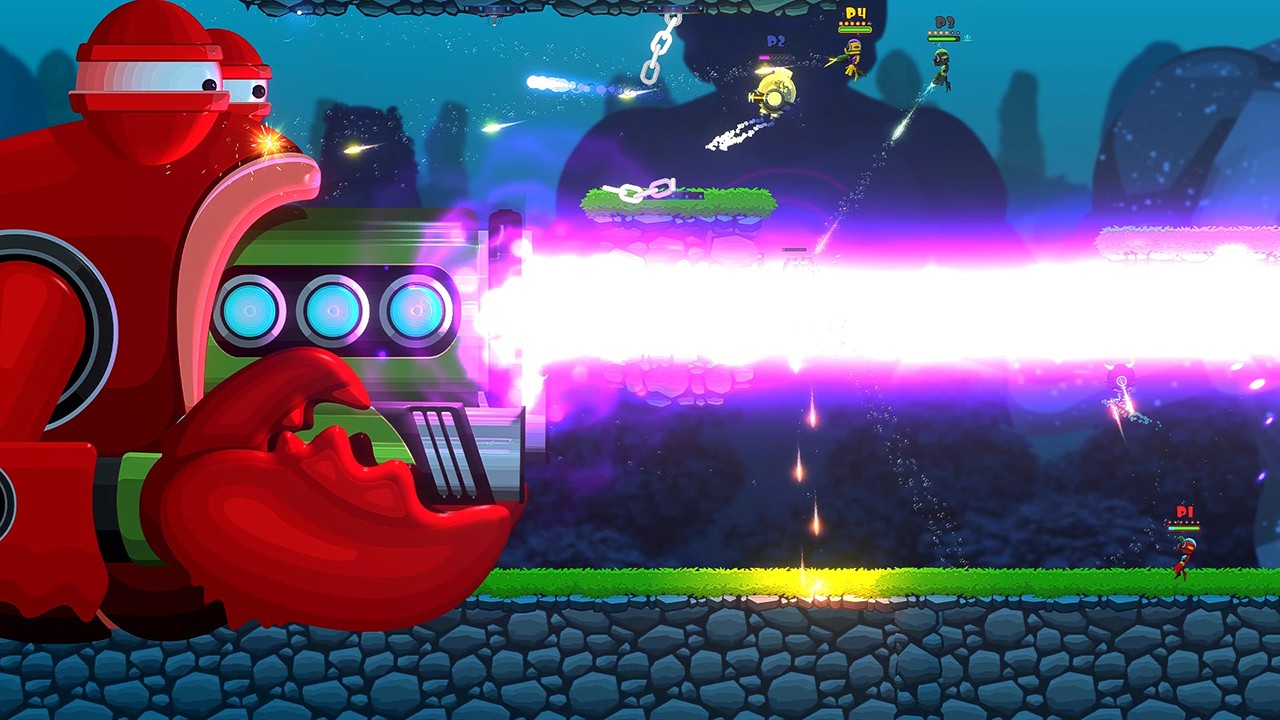 As Sebastian the crab once said, “Life under the sea is better than anything they got up there!” And who can argue with him? A calm environment, fishes to keep you company, and no-one to bother you. That is, until the creatures of the ocean go insane! Their peaceful ways are replaced with a lust for blood and destruction. This is what you have to contend with in Decoy Games latest title Swimsanity.

Swimsanity is a multiplayer side-scrolling adventure title that takes place under the water. (Now you know why I quoted Sebastian the crab from Ariel the Little Mermaid.) The game is all about fast-paced action, angry fish and surviving. This local or online title allows you to take the role of several super heroes. Your only task is to get from point A to point B while avoiding the mega creature that lurks on that stage. Pass through 3 checkpoints, avoiding all obstacles, traps, and enemies. Sounds easy, right? I can assure you, it is not! Everything about this game is tough, the entire world wants to munch your super hero face off, it’s brutal, yet fun.

You take on 5 unique worlds, and 8 different game modes, completing over 150 challenges en route. Each of these can be tackled by yourself, or as part of a team of 4. I can’t stress enough that this game is much better in a group. The difficulty doesn’t reduce, but it becomes much more manageable. Also, it’s a guaranteed argument, like playing board games at Christmas, so why would you want to miss that? 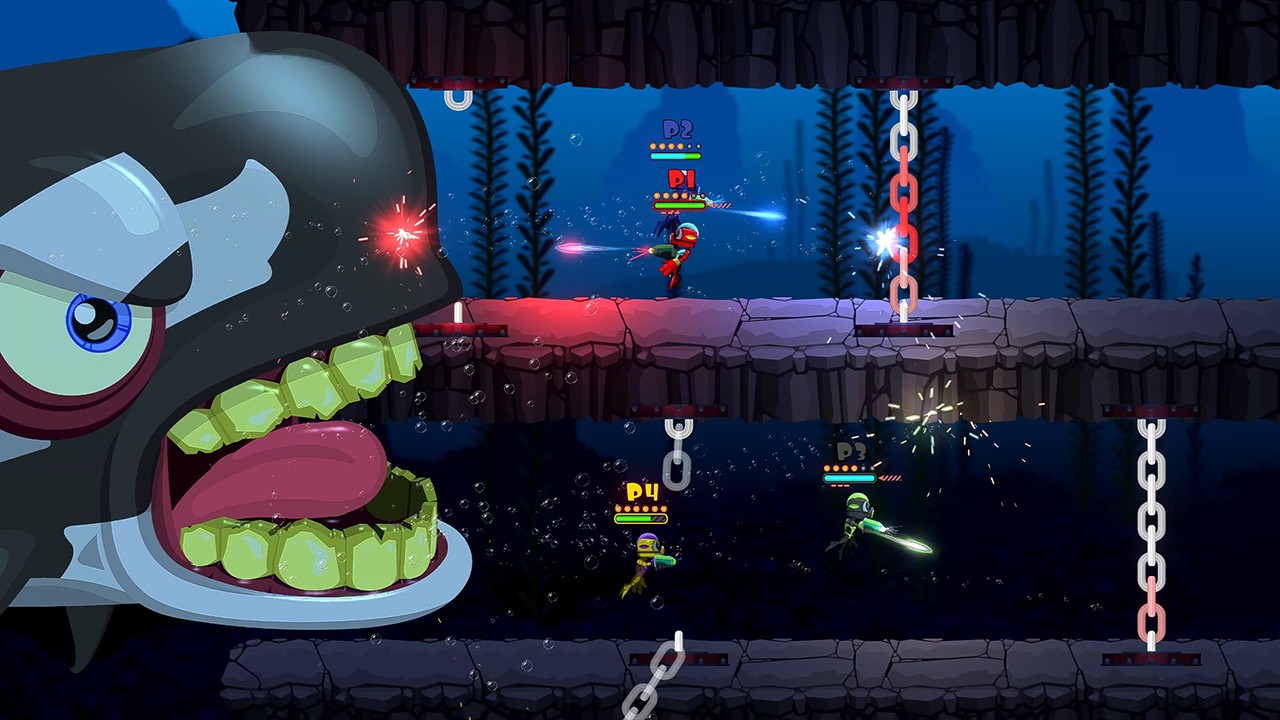 Let’s look at these game modes that you will be enjoying. First, the action is split into “Couch Co-op” and online. It’s key to note that the developers have allowed Crossplay. This will increase the playerbase and will make finding lobbies much easier. You are then free to choose between Co-op mode and Verses. The main story and survival options are found here. Whereas Verses contains 5 different arena based modes. Deathmatch, capture the flag, and last man standing. The first 2 can also be played 2 Vs 2. I loved the variety of game modes, and the challenges that each presented. Verses was a fast-paced, competitive nightmare. There were bullets flying, and lots of screaming and shouting. Close your eyes and think of what elements you’d want in a classic couch multiplayer title. Swimsanity would tick most of those boxes without fail! The gameplay is easy to pick up, it’s fun, competitive, and quick. The variation in power-ups and character stats allows for different play styles. It has a retro feel to it and is extremely addictive. Hours flew by, and the only reason we stopped playing was that I needed to see how the adventure mode played out.

The adventure, or main game mode, can only be completed by human players. This will restrict some players, as I found that as a solo gamer the difficulty was particularly tough. No matter how much I tried, the monster of the stage, be it; shark, millipede, or any other, would catch me. (That’s Game Over, and your options are to restart or quit to main menu). With only 1 other human, you stood a fighting chance. This is where Crossplay will come into its own, giving you the chance to team up with strangers all in the hope to win. If you don’t fancy going on a journey, you can attempt a horde style survival battle. You can make up a team with Bot players if you have no friends. But like me, they are limited to how skilful and helpful they are. You must be getting the clues here, its better to play this title with friends. Its good solo, but it reaches a whole new level as a group. The survival mode allows you 1 minute to wipe out all enemies in sight. If you cannot achieve your goal in the allotted time, or you die, it’s Game Over. The waves keep comings, and your foes get tougher as the stages roll by.

You’ve got an idea of what to expect from the gameplay, but what about the gaming mechanics, how do they work? Well, everything revolves around the challenges. As you complete any of the objectives, you will be rewarded with up to 300 Golden Orbs. These Orbs are saved, and once you have enough, you will unlock new characters. They all have unique special powers known as Unleashes. Each will be a help or a hindrance depending on the situation you find yourself in. You earn your special power by killing everything in sight and filling up your star meter. Teammates will now be healed, and enemies decimated. Sharks will kill everything in sight, bombs will fall from the skies, and many more. It’s truly a game changer, and an overpowered treat. Alongside this, you will collect power-ups on every level. These will allow you to have rapid fire, missiles, bombs, shield, and health. Collecting these are essential and will be the difference between success and failure.

Whenever I read reviews, and see the word Retro, I picture pixelated graphics, and 8Bit audio. So, I want to put on record now that Swimsanity is Retro in feel, and gameplay, but not in its presentation. It is the perfect mix of old school, and current standards. The graphics are crisp, bold, and a joy to look at. The colour palette and art style reminded me of a Japanese cartoon. The giant creatures of each level are fantastic to look at, and will fill you with dread. The action is smooth, and it never suffered with any slow down or lag. I expected there to be many issues, as each level has lots of enemies. To the developer’s credit, this wasn’t the case, and it was a joy to play. 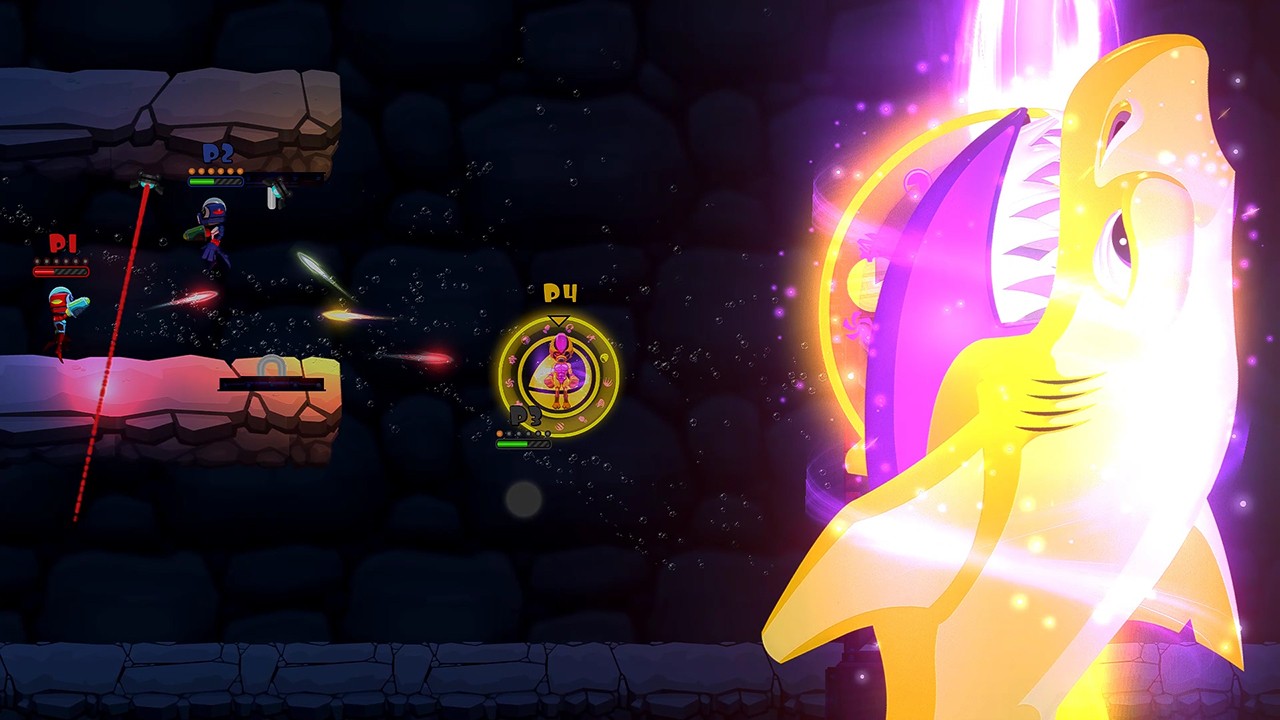 When you have a fast-paced arcade title, you need an audio that matches this. Fortunately, this is exactly what you get. Like platform titles from the early 90s, the simple upbeat tempo sets the scene. The synthesised audio is brilliant. It has the right level of aggression that gets the blood pumping. The sound effects work well, but are as you’d expect from the genre. Both the audio and graphics compliment the gameplay and the theme.

Before you get to do anything, you are shown how the controls work. When I saw this 5 page explanation, I was a little worried. It looked very complicated. But let me put your mind at ease. It looks much worse than it is. I could master the layout within a couple of games. It was great to trounce your friends while they were still learning, I was like an underwater King. My only gripe was the dual stick action. I’m terrible at this style of game and usually give them a wide berth. If you are like me, you’ll be able to play this with no real problems, but expect to be destroyed by anyone who loves this setup.

Whenever I buy a game, I want to know if I’m getting good value for money. Will there be a long main story, does it have plenty of replay value, what’s the achievement list like? These are questions I ask myself before I commit to most titles. Swimsanity has proven fantastic value for money. Though there isn’t a story as such, the adventure mode is challenging. It has a hardcore version which is brutal, and both will keep you wanting to play. The Verses games are fun and addictive. I could have played them for hours at a time, even if I fell out with my family and friends while playing. What the developers have done well is to incorporate both Local and Online play. This is a rarity these days, and works very well with this title. The achievement list is tough, as are the objectives for the Golden Orbs, one of them is to get 100,000 KOs. That is a tough ask, and will take days of gaming to unlock it.

Now my time with this game hasn’t been plain sailing. There have been a few teething issues, but having spoken to Decoy Games these will be resolved on release. I have loved every minute of playing this, as it’s a true multiplayer experience. If you have a good group of friends to play with, then you will have hours of fun. If you don’t, there is no need to fear. I believe the community will be larger because of Crossplay, and finding fellow gamers will be an easy task. So, do I recommend that you buy this? Absolutely, I had a blast, and will return to this regularly. It’s time to grab your hero, and swim, shoot, and dodge your way to victory.

A dual stick side-scrolling underwater adventure awaits you. Play solo, or with friends online or “Couch Co-op”. It’s a competitive, fun and fast-paced game that will get under your skin, and make you want to play more.