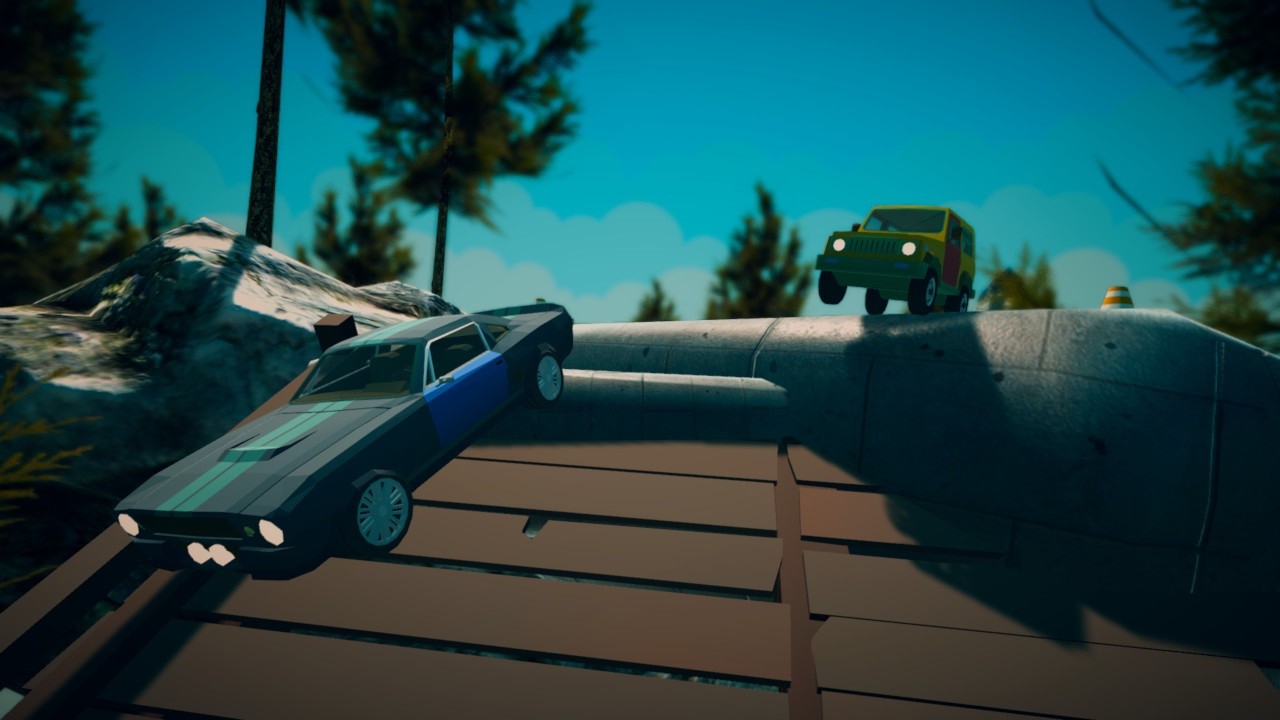 I hoped that Tiny Racer would grow on me, or I’d unlock a mode or vehicle that held my attention longer than a lap or two, but for most my playtime, I found myself bored and irritable. The biggest letdown of the game is how the vehicles handle – especially the minivans and buses at your disposal as one slight clip, and they fishtail so much it feels like you’re playing a jet ski on land. But saying that the other car’s handling is better, isn’t selling it either.

The visuals are pretty nice, and when I had initially viewed the trailer had a feeling that this game would be a lot of fun. It isn’t. Handheld is my preference for Switch titles, but I found myself with the Switch in docked mode so thought it would be a good chance to play on the TV as a multiplayer. For some reason, the game wouldn’t recognise either of my pro controllers or the joy-cons when detached. The commands on the screen said to hold A for accelerating and B for reverse, but there was no response. Frustrated, I took the Switch out, and it worked so I wasn’t impressed that I would have to play the game in split-screen in handheld mode.

Jumping into the tutorial, I thought my controllers were experiencing drift, but in reality, it was the supposed physics-based mechanics of the game. The bus you drive consistently veers to one side, and anytime I’d make a jump, it would hit the deck, and I’d have to respawn again. I hasten to add that the ZR button respawns and not an alternative to accelerating – a very bizarre choice. 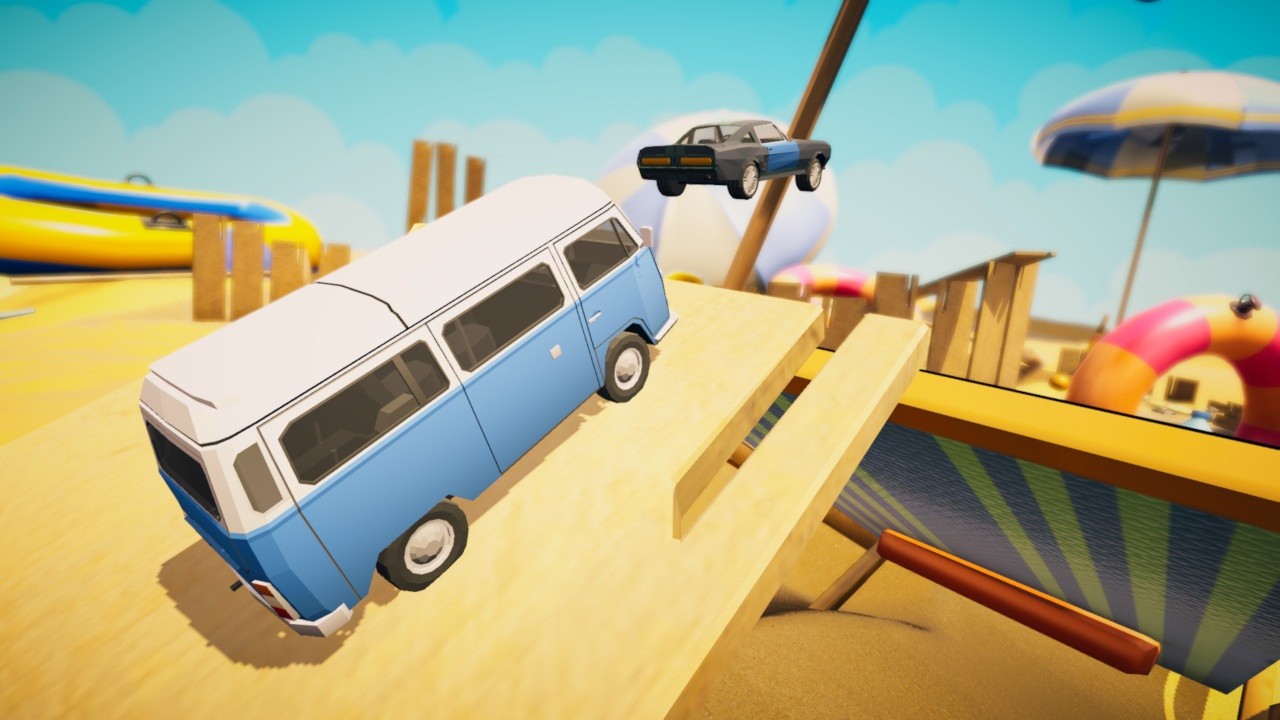 The viewpoint is fixed in the third-person like a chase cam, and while it looks nice enough, it’s a bit of a camera trick the developers have used where they blur out the background giving the impression that the foreground is super sharp. If you isolate the vehicle models, while they aren’t bad, they’re not as good as they first appear. Still, there’s a reasonable choice on offer from sports and hypercars to classic hot rods and minivans. They all handle atrociously, though.

It’s almost as if the cars were made of polystyrene as they have zero depth to them, and the slightest jolt sends you spinning. The difficulty doesn’t help as the rest of the cars speed off, and you’re unable to catch them. If you’re ‘lucky’ enough to get to a corner from pole, expect to duke it out for the best racing line, but be advised you’ll almost always be on the receiving end of a spin-out.

Tiny Racer didn’t make me want to rage quit as such, as I wasn’t invested enough in it to care. I had started in the arcade mode with music that would send even the most die-hard Cocomelon fan loopy. Emphasis on loopy. The music is on an endless loop of a juggle type song that you would hear at a playscheme, but where the kids weren’t listening and causing havoc elsewhere. While we’re on the sounds, while the effects aren’t bad, the humming of car engines isn’t going to distract you from the handling. Pretty fundamental in a racer. 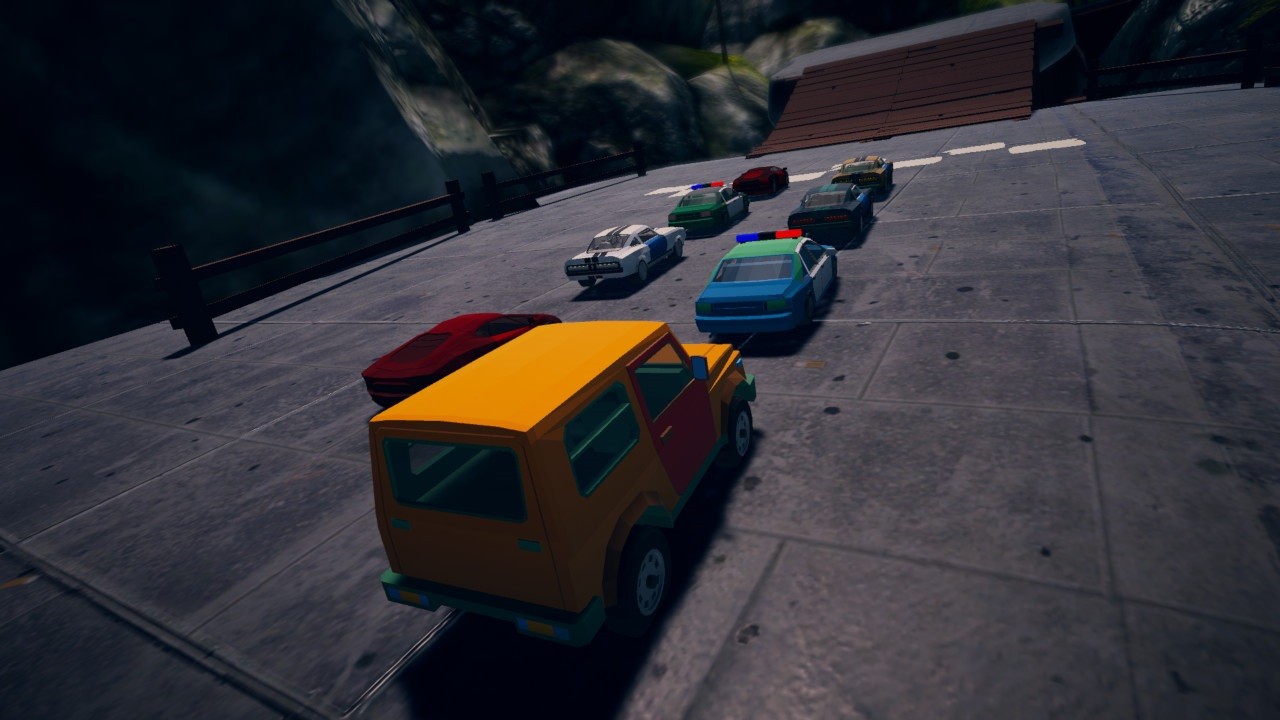 When you choose a quick play game, the menus aren’t intuitive, and you end up selecting another track rather than racing. It just feels unfinished and still in the development stage. Once the race begins, it’s the madness of trying to avoid all other cars so you don’t spin, but even on a straight, my car would end up in a barrier – seemingly without my input. This doesn’t sell the tournament mode either as getting through a race is an ordeal in itself; while there aren’t many races for the few trophies up for grabs, finishing in the top three is far too arduous to be fun. The redeeming factor, then perhaps could be multiplayer, but at the time of writing, I could not get it to work in docked mode, nor did I attempt to play as a two-player in the tabletop mode as the visuals are quite small as it is.

I genuinely had expected this to be a fun game, not for it to be a game-changer or so engaging I forgot to feed the kids. Still, the handling is so poor and the gameplay so monotonous, I was surprised that this got the go-ahead to be released in its current state. It’s very rare for me to give such negative criticism, but as a fan of driving games in a genre that is so full of Micro Machines wannabes, you need to have something to stand out from the rest. Instead, Tiny Racer stands out for the wrong reasons – an unenjoyable driving game with poor physics and abysmal handling. A shame, as on the surface, this looked like a good game in terms of presentation and in a fun party-like level at least, but I just can’t bear spending any more time on it.

Whether the docked gameplay I experienced was rogue or not, it’s not enough for me to persevere with sticking with Tiny Racer as the fundamental gameplay is flawed by poor handling and uninspiring gameplay. As I finish this last sentence, I can hear the constant beat of the in-game music as I played one last time to try to change my mind. I stand firm on this one.