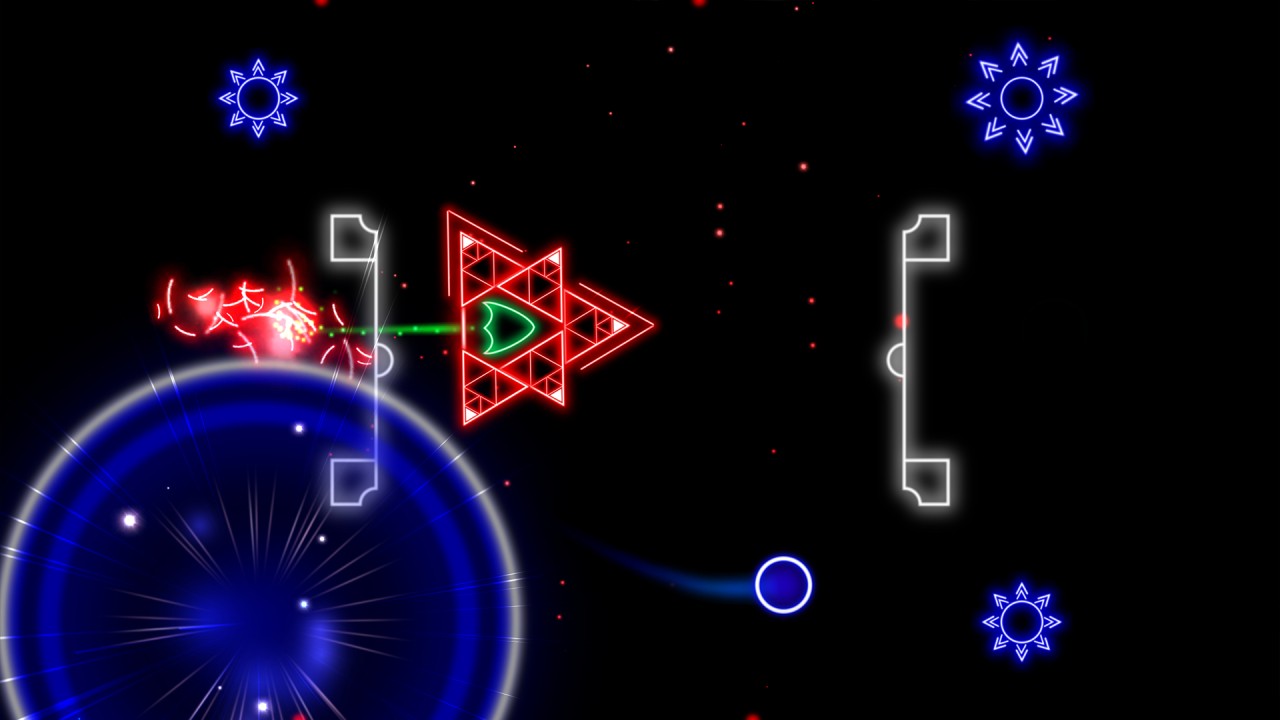 How did puzzle games survive before the invention of the star rating system? Honestly, it’s such an obvious thing that I can’t say, for certainty, existed in puzzle games when I was playing back on the NES and the Gameboy, and it feels like such a natural goal set that I’m stunned to even consider it not being in a game. Mobile gaming thrives off people trying and trying to get those perfect ratings on games that either have an imaginary or very tangible numeric system that keeps them from getting the full star accomplishment, and it drives many players to insufferable madness. For the folks at Salmi Games, there was a realization that taking this system and layering it off of something intrinsically beautiful and engaging – like the geometric shapes of Ellipsis – was a surefire way to keep players hooked and engaged for a good, long while.

For Ellipsis, this puzzle/action game is quite simple. You play a circle, and you want to connect to other circles. What’s really fantastic about this premise is the fact that you get dropped into the game without any splash screen or precursor whatsoever. Hell, I admit I sat there for about three minutes waiting for something to happen when all I saw was a circle on the screen, having mistaken the main character for a loading circle symbol. Once you get moving, the entire idea is easy to put together. There are five circles that appear, numbered with dots inside and appearing as the previous one is collected. Touching the circle can cause the dots to scatter if you’re not careful, and you want to get the dots as well. As soon as you touch the fourth circle, two items appear: the exit gate and the fifth circle. Players will have a choice between escaping now and getting a lower score, or going after that fifth circle and completing the circuit. 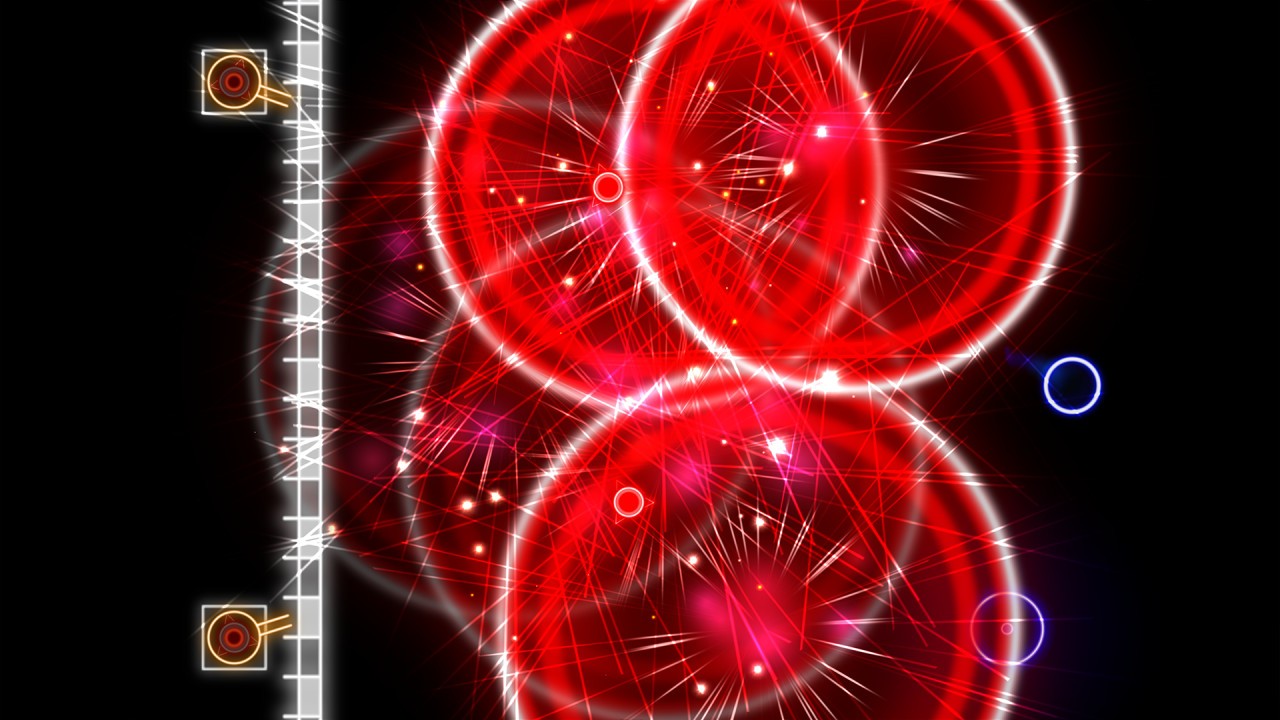 There is a star rating of five for the stages of Ellipsis, with one being the lowest, and that top tier rank means several ideas need to align properly. First, you need to survive. That might sound like a silly, obvious point but the game layout is shockingly difficult with a number of obstacles (that we’ll examine in a moment) standing between you and perfection. Additionally, you need to not miss any of the dots that fall out of the circles, you need to hit all five circles, and you need to get out in a predetermined amount of time to which you are not privy. These all might seem like obvious points, but Ellipsis is very big on minimalism: you have no idea what your score, timing or otherwise is in a stage whatsoever. There is only a binary version of success or failure, with an intangible set of parameters that tells you how much or how little you succeeded. It’s very ethereal, which helps along the drive to do better and also fits with the aesthetic of the game.

As we mentioned up top, Ellipsis is gorgeous, and I mean that in a very artistic and neon-drenched sort of way. It’s troublesome that we inexplicably never saw a game like Geometry Wars with acclaim till the 00s, because the idea of using simple shapes as characters and icons has been around literally since video games existed, and even before video games (Flatland is frigging amazing, yo). Ellipsis takes a series of simple shapes and concepts and elevates them to a much higher plane, using more complex builds and styles to combine with lights and color for a maximum effect. It becomes immediately evident that you’re the only thing in the level that’s safe, and everything else is dangerous. Walls that bleed a red or orange color are assuredly going to destroy you. Triangle lines that evoke bullet trains hurtle about with reckless indifference as to whether they ram into you or not. Smaller points bring forth the imagery of teeth that are looking to bite down on you, even as buzzsaws and laser beams carve through the air and mere movement can incur the wrath of the shapes lying in wait around you. In spite of what the visuals might present early on, there’s literally nothing simple about Ellipsis or how to survive.

That, I suppose, is the main crux of what brings this from simply a “fun” game to something remarkable: the thoughtful design. While Ellipsis could have survived with just a series of static levels and difficult corners to move through, the elegance of the way that movements and moments trigger additional variables is really exciting and cool. To have new enemies suddenly appear at the turn for the second circle. To realize that the beautiful airflow effect (that looks like a jetstream and pushes your ship) is more serious than you think when spinning death appears. There are a couple of levels where you need to realize the key to survival is NOT moving, or at least not moving in the traditional way you’ve been jetting around, and it’s a revelation that made the whole thing turn on its head. There’s an intelligence throughout and it really pushes Ellipsis into a more remarkable category than other titles I’ve played in the “avoid to live” sort. 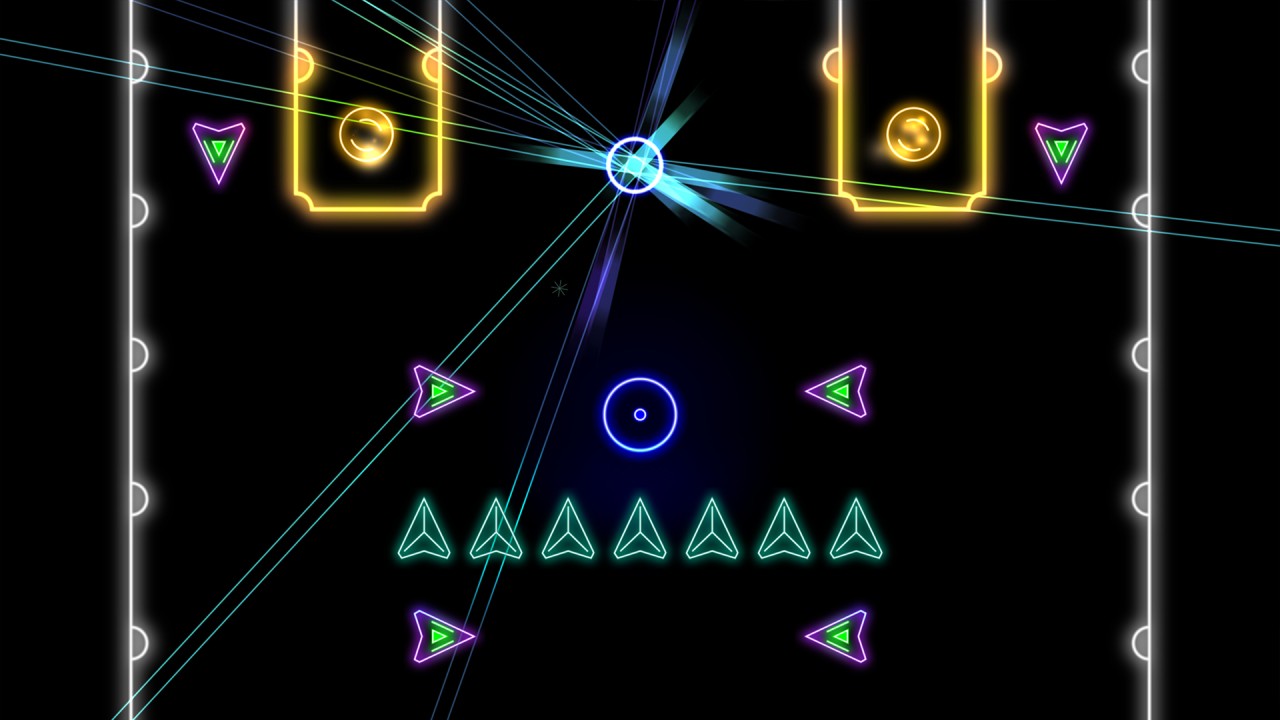 My one and only complaint is that you do need to get used to the jumpiness of the controls. While the only thing to think about is the joystick and moving, your little circle is eager to sprint forward, like a Jack Russell Terrier melted into two dimensions. Early on, you need to get used to how quickly you accelerate and move, and adapt from there. Rather than this be a control problem, I view it as an important feature in the game: understanding the way that this circle moves through the gorgeous landscape and how to help reign it in properly. It adds to the overall effect, and doesn’t distract from the survival aspect in the least.

Honestly, Ellipsis is a fine game, and contains many, many hours of replay value ahead. Nevermind the fact that it seems so incredibly simple and there’s no real plot line to speak of: the need to collect and not get killed is storyline enough. Hell, I sort of wish that I had more time to dive in and really work on getting perfect scores on everything, but Ellipsis isn’t the end of a conversation, more like something that leaves you hanging, waiting for a bit more to be said. I have a feeling we’ll hear more from the developers in the future.

Ellipsis is a fine game, and contains many, many hours of replay value ahead. Nevermind the fact that it seems so incredibly simple and there’s no real plot line to speak of.