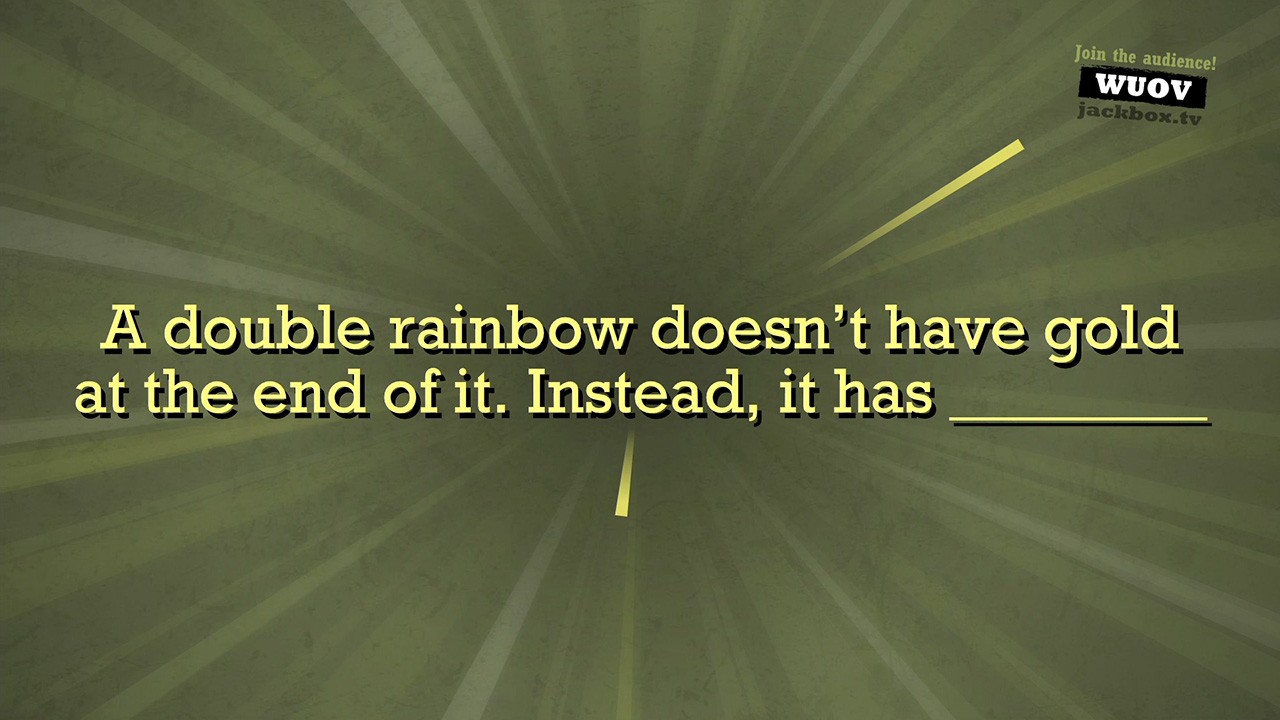 To be honest, not all the Jackbox Games will land well with everyone. That’s the great part about them: they’re a mixed bag of different event style group games, and they feel different to everyone. Some people aren’t willing to drop the cash when they will only enjoy one or maybe two of the experiences. Jackbox recognizes this, and they did a smart thing by separating some games into individual purchases. As we find more and more ways to play and connect with friends through online gaming instead of couch Co-op, there’s no better time than now to dive back into the world of Quiplash.

Quiplash, believe it or not, is an original title: the version we see in Jackbox Party Pack 2 is Quiplash XL that involves some extra DLC and such. The concept, however, is still the same: you get a bunch of friends together, and you have an opportunity to see who amongst you is either the funniest or the most clever. A sentence will appear on the screen, usually something prompting you to either seek out a well-known phrase or create something ridiculous. “When mom packs lunch, you get a sandwich. When dad packs lunch, you get _____.” It’s then you to you and usually one or two other people to figure out what’s both the funniest and most clever response. Upon completion, your answers are shown to everyone (anonymously, to prevent favouritism) and votes rain down to prove which of you is actually the funniest in the group. There’s a final Quip in which everyone writes for the same category (“What would the fifth Horseman of the Apocalypse be at IKEA?”) and, from there, the final winner will be decided. Oh, there’s a cumulative score as the game goes forward, so someone isn’t going to win the whole thing by lucking out at the last second. 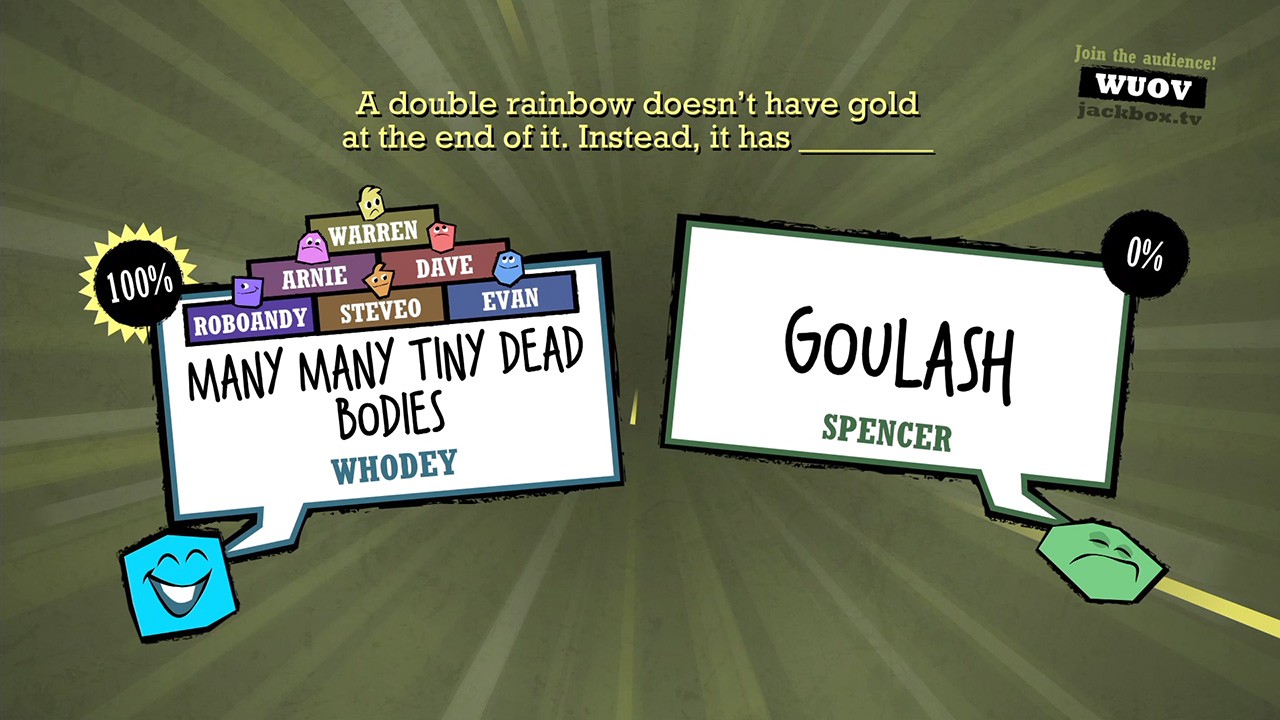 Quiplash is a standalone title that works magnificently in the intended target of the Jackbox audience. For one, the game itself is very minimalistic: there are graphics for the different character avatars, but 99% of what you care about is just reading. As long as you have access to a screen of any sort, Quiplash can be played, and it even works out well on the Switch in handheld mode. The brilliant choice of using the Jackbox.tv portal to allow smartphones to be the different controllers instead of requiring players to have some kind of customized device is also a good one: hell, you can get a junk Android tablet or a five year old phone for less than 20 bucks in most places, and you’re at the same playing level as the others. Additionally, the game molds based off of your playerbase, which makes it more functional than some of the early You Don’t Know Jack games. Whereas those classic titles would have a lot of tongue-in-cheek humour and some questions that are, frankly, archaic by today’s standards, Quiplash keeps things fairly relevant and flexible, with questions like “What two words do you never want to hear a pilot say?” being interesting no matter what the latest tragedy may have been.

Quiplash is also a great game for streaming, which is so key for the new standard of “playing games far, far away from each other.” Most of the Jackbox services have Twitch integration, and Quiplash is no exception, though you can honestly play it over Zoom or Teams if you sincerely wanted/needed to. With up to eight players and everything just being contingent on having an online connection, you can seriously play Quiplash around the world, at the same time, and get some great results. Hell, I wonder if there’s a good website for randomly joining Jackbox rooms and just becoming a part of someone’s game regardless if you know them or not. If there isn’t, there should be: the titles all tend to be fun.

Because Quiplash games tend to be quite short (you can go through a four player game in twenty minutes or less), there is the risk that’s run from repetition, though it doesn’t occur in back-to-back games, at least not in my experience. Quiplash has slightly different questions from the XL flavour in Jackbox Party Pack 2 (and completely different from Quiplash 2 on Party Pack 3), so there isn’t a necessary harm in double dipping, and definitely nothing wrong for first time players. This is a game that works well with adults and children, respectively. Kids can create funny, sometimes non sequitur answers that will be hilarious, and adults will often write raunchy stuff that kids will vote for without understanding what the hell just happened. As always, you can tone up or down the vibe of the game both in the settings and in your own input, so don’t be too worried about little Timmy joining in on a game and then being horribly scarred for life. 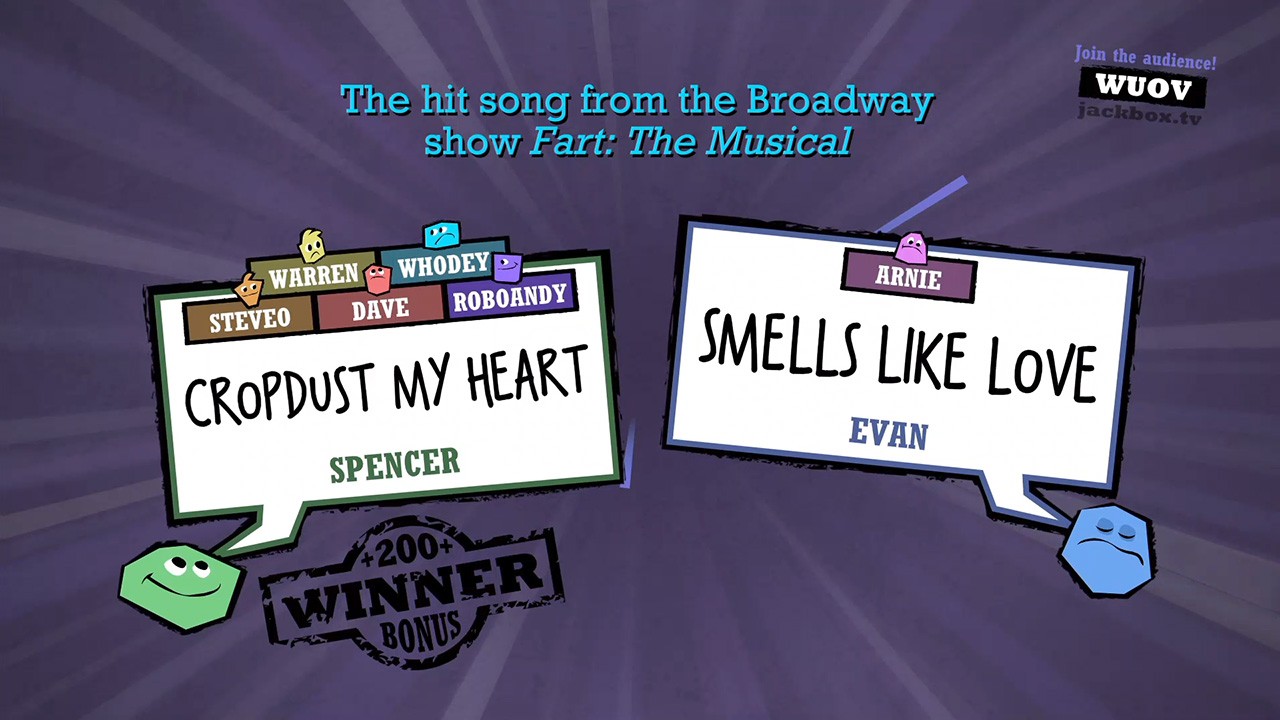 The only drawback to Quiplash is that, like many of the social Jackbox Games, it can be tainted by people purposely setting up wins. If you’re someone who has joined a group of friends relatively recently, inside jokes can be a lay-up that you simply don’t have access to. That’s not really a bad thing, but I’m reminded of a couple of games that I’ve done with family before, and how pissed my sister-in-law got that my siblings and I voted on an answer that had to do with a running gag in our childhood that, sadly, was not funny to anyone else. It’s a social game: you have to interact with people to some degree and that can make or break the success of the entire experience. Come to think of it, that doesn’t make it a drawback, but it makes it slanted depending on what side of the table you’re on.

Buying the single title of Quiplash seems silly, because most of the other games that you’d get in Jackbox Party Pack 2 are phenomenal (Earwax is still one that works for every person, every time), but it is an economic thing. If you just wanted something to do one evening with people over the screen after work, grabbing Quiplash is a better impulse buy. Additionally, it’s a good measuring stick to see how interactive or funny your new coworkers are without having them to commit to something that might show off a darker or angrier side. Certain card games that also invite humour can be viewed as boring or derogatory, and not everyone is willing to touch cards that everyone else is touching. But asking people to stare into their phones so that they can howl with laughter at each other in a fun loving way? Quiplash might be the best way to break the ice without asking for more out of anyone, and it can be done in an inexpensive, fast way.

If you don’t have the Party Pack and just don’t feel like shelling out for more, this individual party game is one of the best standalone games you can get.

A game where being clever is better than being dirty, but being both is the fastest way to win over friends and coworkers.