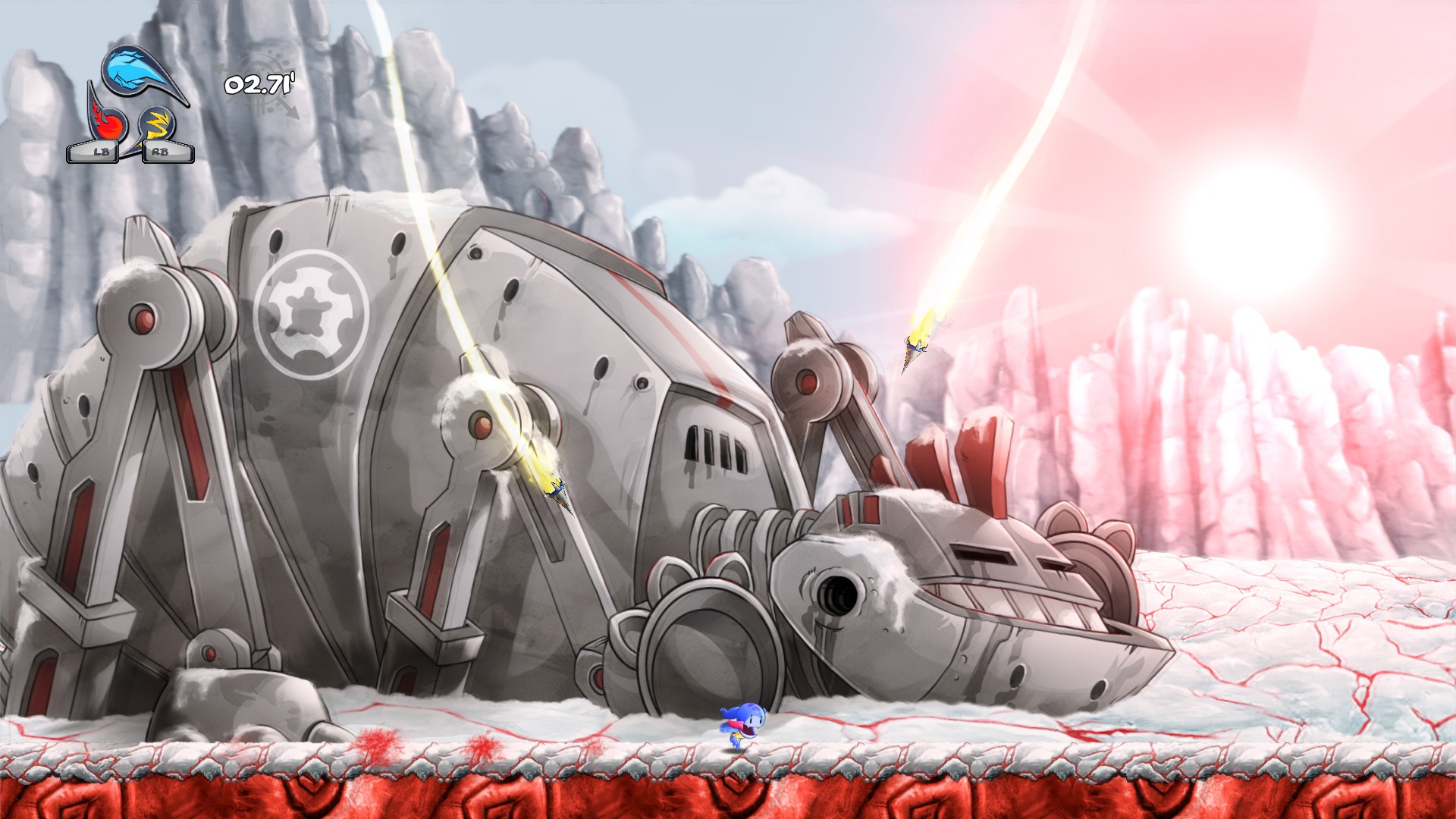 Platform games are supposed to be a challenging yet fun experience. Occasionally a title comes along that tests this logic and pushes its player base to the point of destruction. OkunoKA is one such franchise. It is beautiful, colourful and fun to look at, yet, it’ll drive you to the point of controller smashing anger. I was contacted by developers at Caracal Games and asked to preview OkunoKA Madness. Now you may think, “Why would you want to play a game that will make you angry?” After the first instalment, I thought about this myself. But there is something cathartic about completing a level after failing it for the millionth time. So, what makes this latest edition stand out from its predecessor? Let’s look at the fine details and see!

Publishers Ignition Publishing has asked me to look at the first 2 worlds for this preview. I will mention the other modes that are available, but I will allow you to experience this for yourself. The premise of OkunoKA is that you control several characters you unlock along the way. Each has its own characteristics, and will be more suited to different situations. The aim is to move from point A to point B. Where you must overcome any obstacles, all while manipulating the environment. The stage ends when you consume the dark soul that floats ominously in the air. All sounds straightforward, right? Wrong! This is like the Dark Souls of the platform world. Having played it for around 5 hours it’s safe to say that I have a severe case of tourettes, I’ve never sworn so much in my life! I like a challenge, but this is next level stuff.

You control Ka, a blue-coloured hero who must save the world of souls from the evil Os, his deadly enemy. Ka is fast moving and easy to control. He starts out with no super powers and traverses the landscape by leaping surface-to-surface. As the game progresses, he swallows coloured souls, these allow him to control fire, ice, etc. Each of these new powers enables you to manipulate the environment to find new paths to progress. It’s a clever new mechanism that adds a whole new level of difficulty. You have to plan your approach and have inch perfect movement to succeed. It’s painstakingly good, and will test the most adept of gamers. 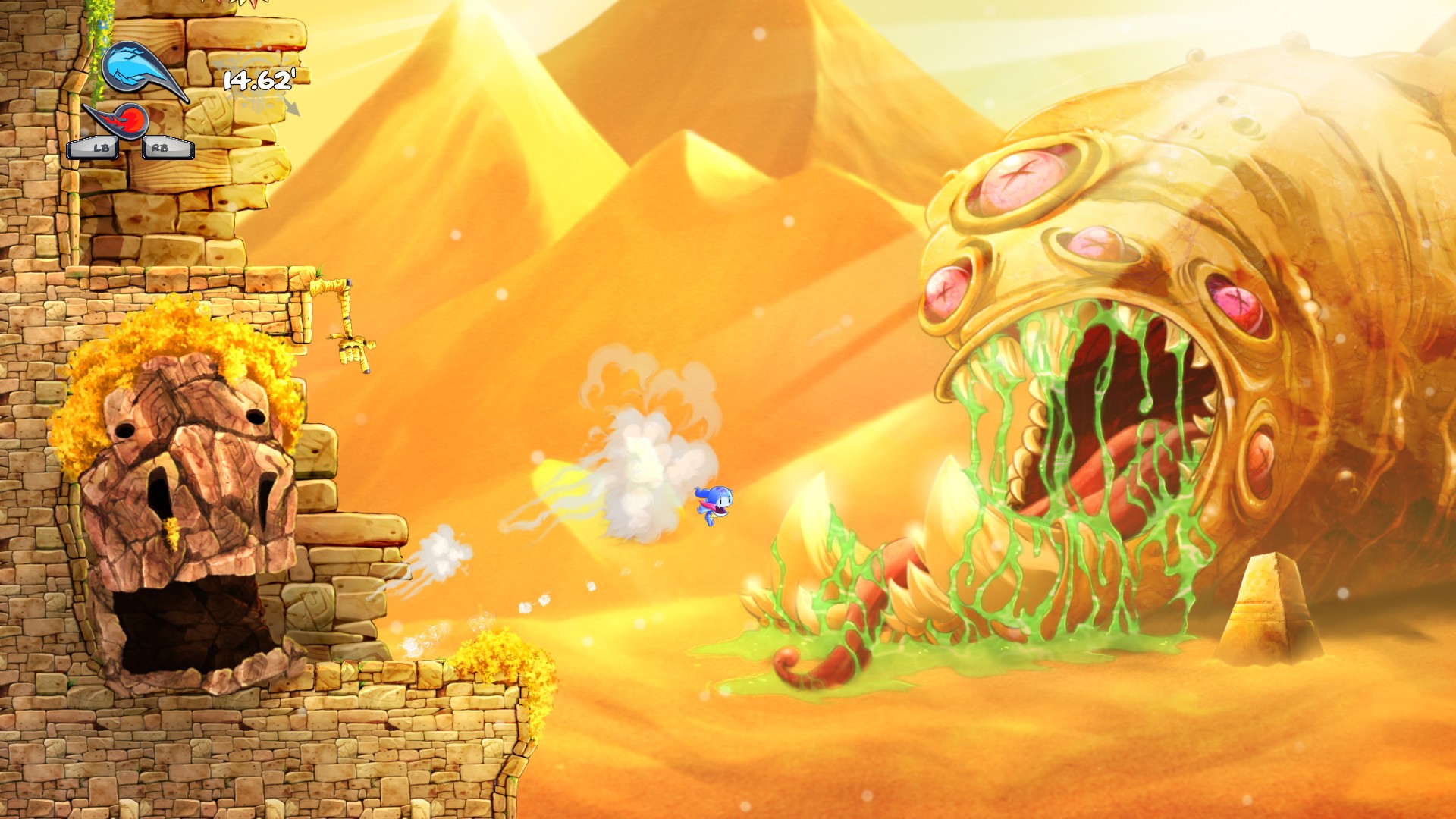 The story takes place across several worlds. My experience spanned 2; Fairy Bugs and Desert Plains. Each follows the same basic principle, with a different backdrop. Each comprises 19 levels, and the 20th is the boss stage, which guarantees to send you over the edge. Though the main aim is to finish the level, you will also be tasked with collecting purple souls, and diving into vortex stages. These additional targets have made an already challenging game that bit harder. The purple souls must be collected before you finish any stage otherwise they don’t count. And the Vortex worlds are a monochromatic nightmare. Unlike the main stages, these challenging levels give you 3 lives to complete all the goals. I neither had the skill nor the patience to achieve this and applaud anyone who does.

As you start the game, you will be greeted with 3 game modes; Story, Madness, and Time Attack. The latter is a race against time to complete each of the levels you play. Madness is an unknown entity and is something that I plan to try in the future. The story was where I spent all my time. Each stage is timed, and the time taken for completion allocates a ranking. Scored from S to F you will progress no matter the result, but personal pride will make you replay each level. This is a perfectionist’s dream, and a nightmare for everyone else. S ranks are hard to achieve, so if you get one, I advise you to add it to your CV! Okunoka Madness is a difficult game, and anyone saying otherwise is lying. But, this doesn’t mean you shouldn’t play it, it’s one of those love-hate relationships. I played a stage for 20 minutes straight, making the same errors, and getting more frustrated. But the relief and sense of achievement when you succeed is euphoric.

So, I’ve given you an idea of the gameplay mechanics, how the worlds have been set out, and the difficulty. So what’s different? The additional game modes, a new world, extra characters, and the Leaderboard. The developers have added a lot to this port from the Nintendo Switch. There is a lot to love about this game, even if it causes you to pull your hair out while you complete it.

As soon as you load into the game, you see an awful lot of work has been put into creating a detailed world. Each stage is very short, yet the developers spent a lot of time making sure that you can enjoy and explore each one. My favourite to look around were the Vortex levels. It was eerie trying to navigate the traps of the monochromatic stages. I found them the most challenging, as it was hard to identify all the obstacles you had to overcome. The colour palette used was vivid, the lines used to create the images were crisp, and the playing area is well defined. The animation of both enemies and player alike were smooth, and easy to follow. This is one of the better looking indie titles that I’ve played in a while. 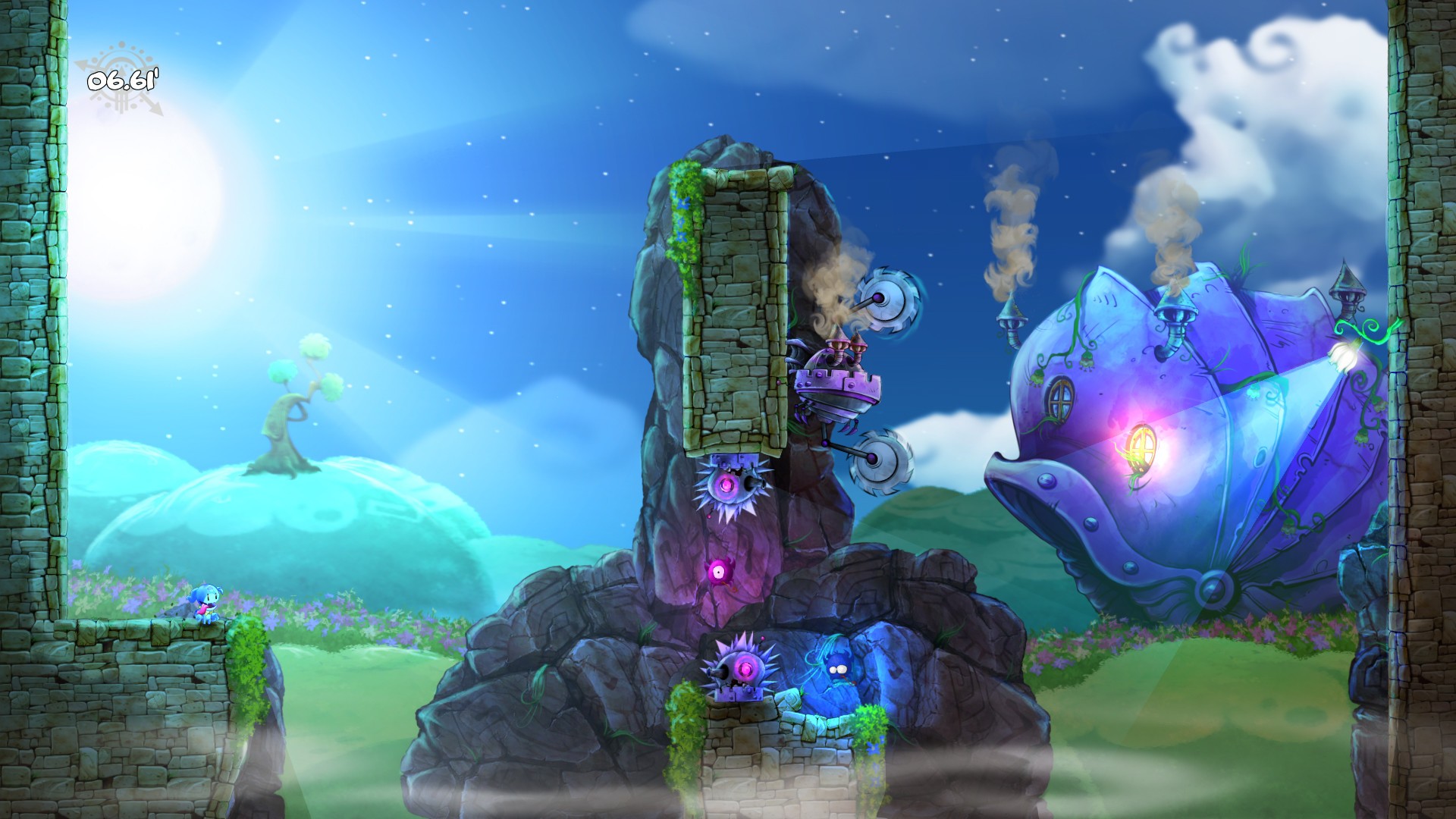 The action is fast paced. Yet, the developers didn’t create an audio to match. I expected an upbeat tempo to get the blood pumping, but what you hear is a folksy sound. The music is repetitive, but it didn’t get annoying, it simply existed in the background. However, the chirping noise of the yellow soul who barks instructions at you was annoying. There was no way to stop it, I muttered “Will you shut up!” And when you play this, you’ll know exactly what I mean. As you reach the goal you are met with a delightful “Yeyyyyyyy!” It was a nice finish, and it felt like you had your own set of supporters vying for your success. Both the audio and visual presentation work well and complement the action in a quirky way.

I’m sure you now understand the level of difficulty that you will face when playing this game. One area that leads you into a false sense of security is the controls. They are so simple in premise, but in reality, it’s a button mashing nightmare. Muscle memory, twitch speed, and godlike dexterity is required to get the best results. As a gamer in his late 30s, my abilities in all three categories are dwindling. OkunoKA Madness only highlighted this, so patience and practise makes perfect.

Platform titles tend to have quite a high replay value, and this one is no different. The only thing that will decide if you return to play is if you have enough controllers to get you through it! Its “rage quitting” controller smashing fun from start to end, with several collectibles to get en route. Local and global Leaderboards will keep the competitive gamers happy. And the 3 different game modes will give you plenty of reason to play again. An extremely challenging achievement list will push the Gamerscore/trophy hunters to the limit of their abilities. The most noticeable of these insane challenges is achieving an S rank for the entire world…..no thank you. You couldn’t pay me enough to attempt that, and anyone who does deserves to be knighted by the Queen herself.

We have now reached the end of my time with OkunoKA Madness, so what are my closing thoughts? It’s brilliant, though very, very difficult. I cannot stress it enough, this game is brutal! If you take this on, you will experience a quirky and unusual take on the platform genre. If you played OkunoKA on the Switch, you may think it’s not worth trying the latest edition. The extra characters and new game mode adds a new layer of game mechanic that you won’t have experienced. I recommend that lovers of the franchise try out this latest version. How about everyone else, do I suggest that you part ways with your hard earned cash? Yes, I do. You get great value for money, and a lot of game to play. Do you have what it takes to defeat your arch nemesis, Os? Probably not, but everyone loves a challenge. If you can complete this, then consider me impressed!

PREVIEW CODE: A complimentary Microsoft Xbox One code was provided to Bonus Stage for this preview. Please send all preview code enquiries to press@4gn.co.uk.