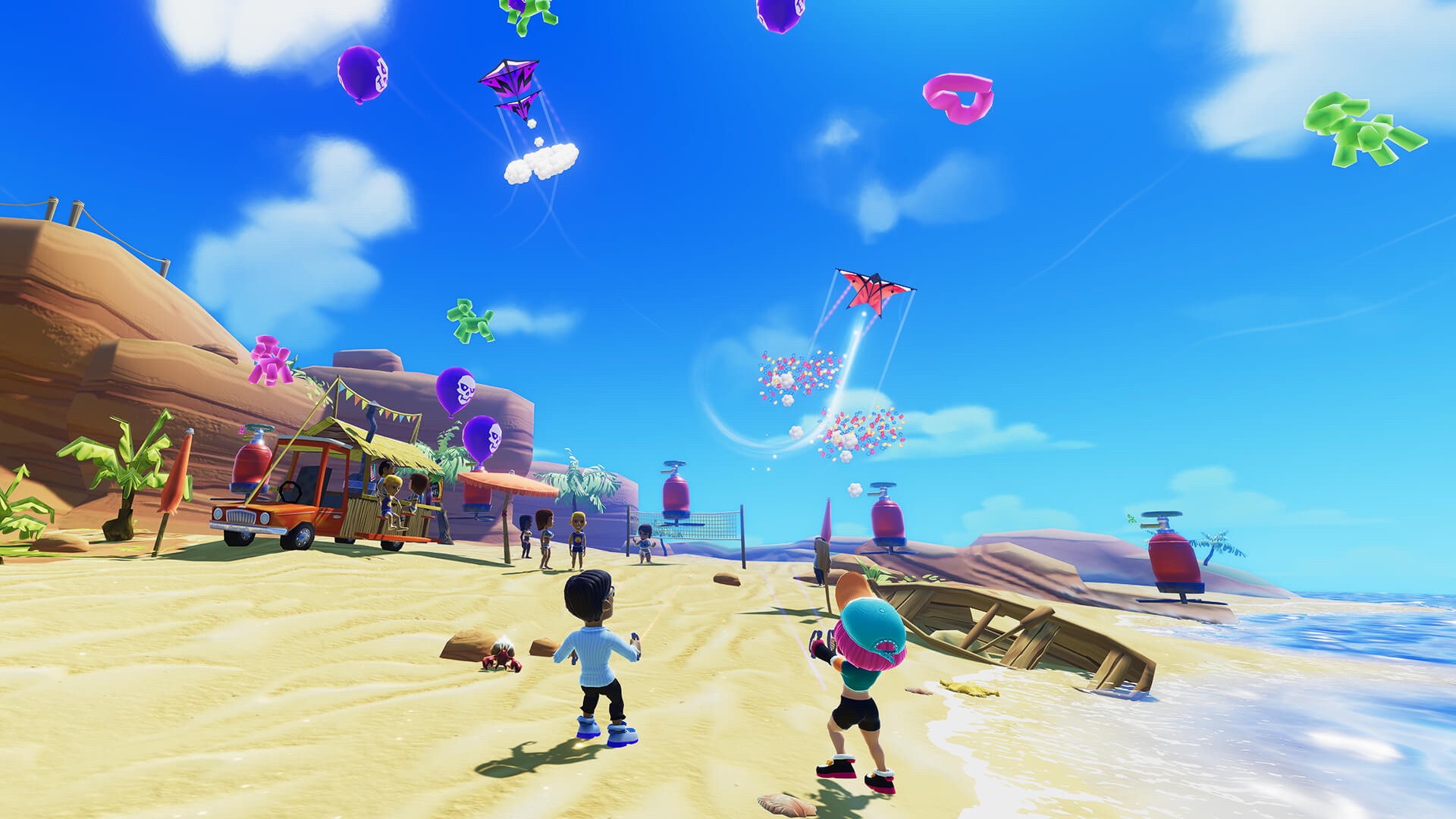 The last few years has not only seen a growing popularity in indie games, but has also seen a resurgence in, what was, a dying breed; namely couch co-op gaming. During the last couple of generations, the majority of mainstream developers concentrated on epic single-player or online multiplayer titles, leaving the concept of couch party games to dwindle away to next to nothing. There’s no coincidence between the popularity of indie tiles and couch gaming; in fact, they both go hand-in-hand with many smaller developers now incorporating its multiplayer capacity into many of their games. I, for one, am happy to see a return of its style, even more so now after playing Stunt Kite Party as it flies a release onto the Nintendo Switch.

Developed and published through HandyGames, a subsidiary of THQ Nordic, this high-flying party game caters for up to four players locally and also contains a single-player campaign; as well as an abundance of playability and pure, unadulterated fun. The first thing that hit me when I loaded this game for the first time, was its superb presentational values. Being a party-styled game, everything here is bright and vibrant, with a production value of stellar proportions. In fact, the game looks, sounds and feels so good, that you could easily be mistaken for thinking that you were playing a Nintendo-published title. In terms of its quality, it’s a game that’s easily on par with games such Mario Kart 8 Deluxe and Splatoon. This in turn makes it a superb family-orientated title which is guaranteed to provide hours of entertainment for all ages.

The single-player campaign follows the exploits of a young kiter, Eddy F. Teykov, who is on his way to the Big City to fulfil his dreams of becoming a professional stunt kite flyer. Each of the levels follow along the journey, bringing a variety of locales and colourful characters to push the story along. With each location visited and new friend made, you partake in a series of kite-flying inspired mini games and competitions which you need to win to advance through the campaign. Although the general premise remains the same, with the art of kite flying, each of the challenges or levels provides a good deal of variety within each of its game modes; from popping balloons to collecting honey and even ghost-hunting on your way to kiting stardom. 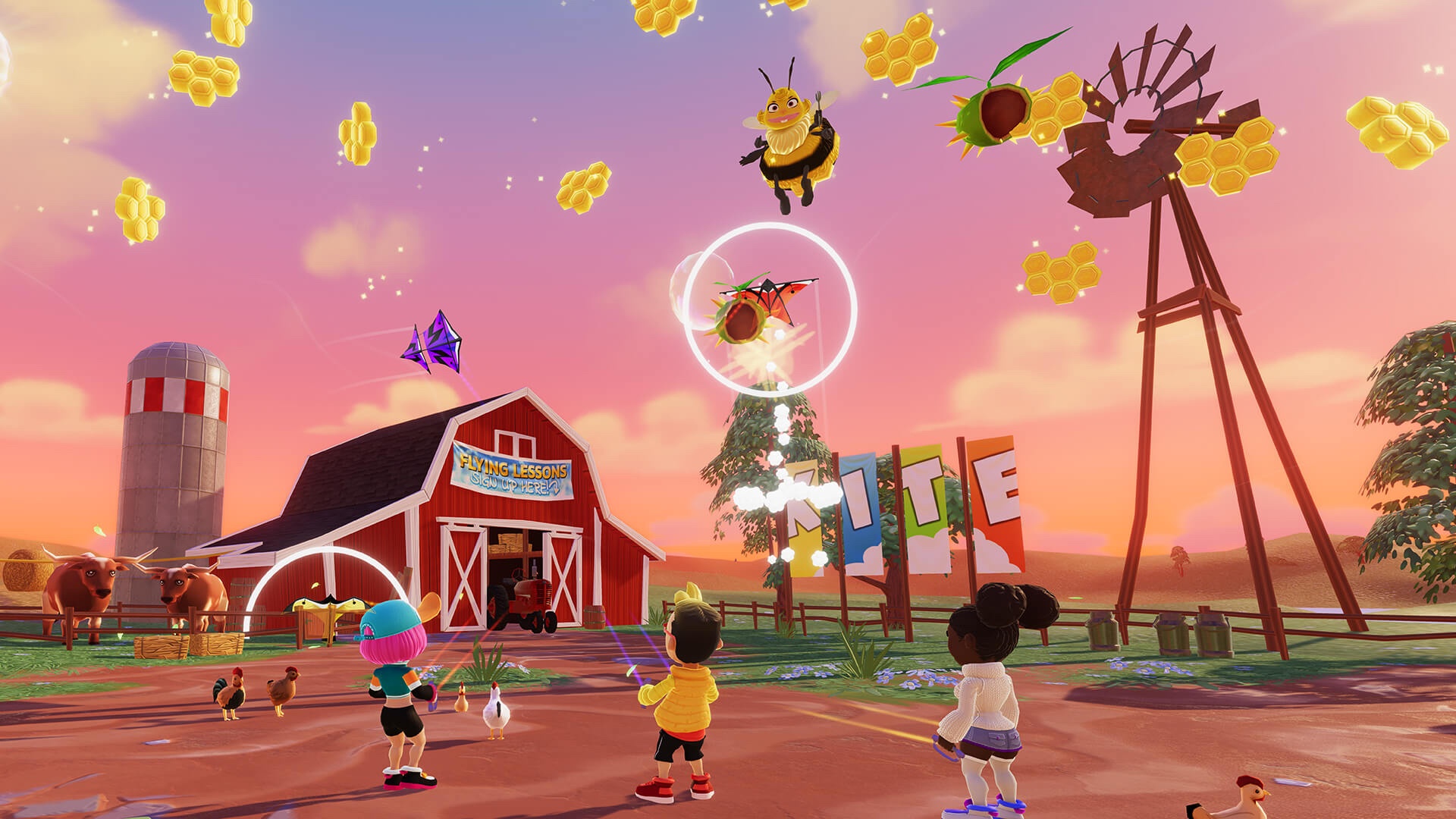 The control scheme contains a very accessible set-up, with the left thumb-stick controlling the rotations of your kite, whilst pressing the A button grants you a speed boost. Whatever your objective, your usually up against AI opponents who certainly know how to give you a good run for your money. However, to try and gain an advantage, each of the levels also contain a number of power-ups that can be collected with your kite. With a quick press of the R shoulder button, you can activate these bonuses, each one offering a buff in a defensive or offensive styles, as well as containing helpful abilities to try and make your life just a little easier.

The mainstay of the game’s playability revolves around playing a series of points-based games; achieve the highest score and beat your opponent and you can move onto the next level, or chapter of the story. In order to win each round, you need to fulfil whatever objectives are required. For instance, in Balloon Popper, you need to pop as many balloons as possible before the timer runs out. It isn’t as simple as it sounds though, as power-ups and hazardous balloons can hamper your progress. In Ghost Hunt, each kite is fitted with an infra-red light and your task is to find the ghosts floating in the air and catch them within your beam. Find a higher amount before your opponent does and you win.

There’s a lot of fun that can be had in the single-player experience with its vibrant charm and addictive gameplay. However, the real fun lies in the local multiplayer aspect of the game; producing some thrilling and hilarious results. With a series of pre-defined cup tournaments, plus the ability to create your own custom competitions, there’s a wealth of options here to guarantee a good family night in. There are ten different game modes to play here, all of which can be experienced in the single-player campaign, from Alien Attack to Meteor Blast; all of which offer a variation on the theme of flying a stunt kite. It’s also worth noting that all of the multiplayer elements of the game can also be played in a solo mode against AI competition. 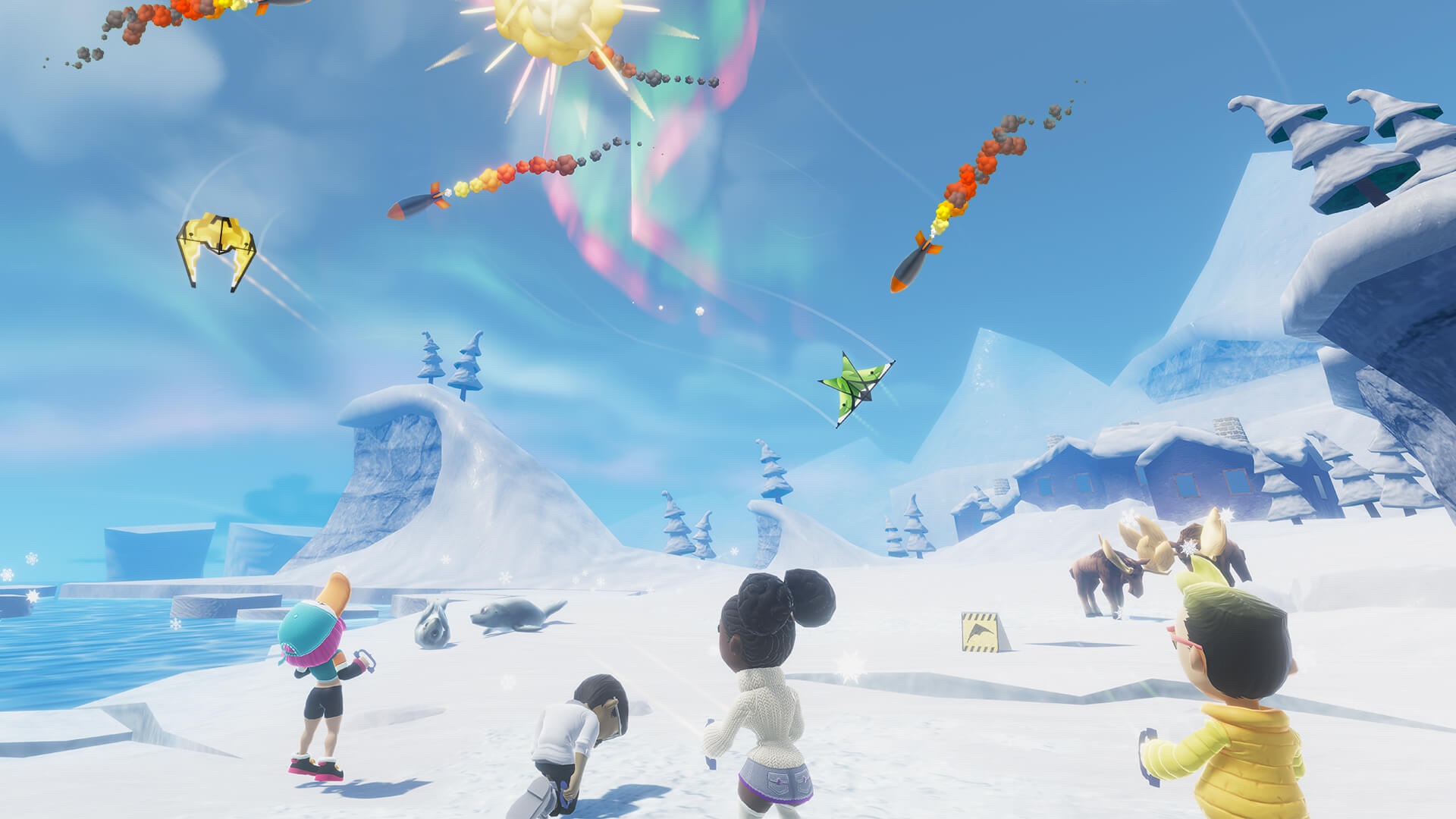 The on-screen action takes place on a single screen, ensuring that madness and mayhem ensues in competitive competition. There’s always a lot going on with certain objectives floating around the sky, keeping a good control of your kite and the abilities of the power-ups to keep things moving along at a brisk and exciting pace. The game does a clever job of moving the screen around in a pan and zoom mechanic, but is one that works really effectively and never feels as if its fighting against you and your fellow competitors. What it basically does is increases the play area from a single-screen to a more, wider vision to stop the screen from filling with too much clutter and avoiding confusion. However, when playing in a multiplayer capacity, especially with four players, this is a game that is more suited to the big-screen of a docked Switch, rather than the mobile capacity of playing on the smaller screen; as the on-screen action can get a bit much in the Switch’s handheld or free-standing modes.

Whatever mode you play, whether it be in single-player or in multiplayer, the game offers a lot of fun and variation to keep things interesting. The campaign mode moves along at a nice pace and holds an interesting story in helping the main character become an ace kite flyer. As well as this though, there are also a variety of unlockables that can be gained through progressive play. A number of characters, kites and skins can all be obtained, making them all playable within the myriad of multiplayer modes; a premise that helps to keep younger audiences entertained, as well as offering an incentive to fulfil everything that the game has to offer.

Overall, Stunt Kite Party offers a triple-A experience for a pocket-money price. It’s stellar presentation is easily on par with the game’s playability; catering for an expansive single-player experience and near endless multiplayer. It’s simply a game of pure unadulterated fun and contains an accessible style of play that will appeal to all ages. The mini-games are varied, despite containing a main premise that follows suit within the mechanics of flying a kite and the story-mode holds a certain charm that makes it a delight to play through. The challenge is also nicely balanced, with AI opponents that offer a good degree of difficulty, yet rarely ever feel frustrating or unbeatable. Considering its high production values, I never came across any technical difficulties; although I have noticed that the “Back” function of the B button to return a previous menu failed to work at times; but I’m sure this is something that will patched at some point. All in all though, for me, this is very much another must-own title for the Switch and an unbeatable party-game for when you have friends and family around.

A kite-flying game that soars to great heights, yet never tails off from having fun.