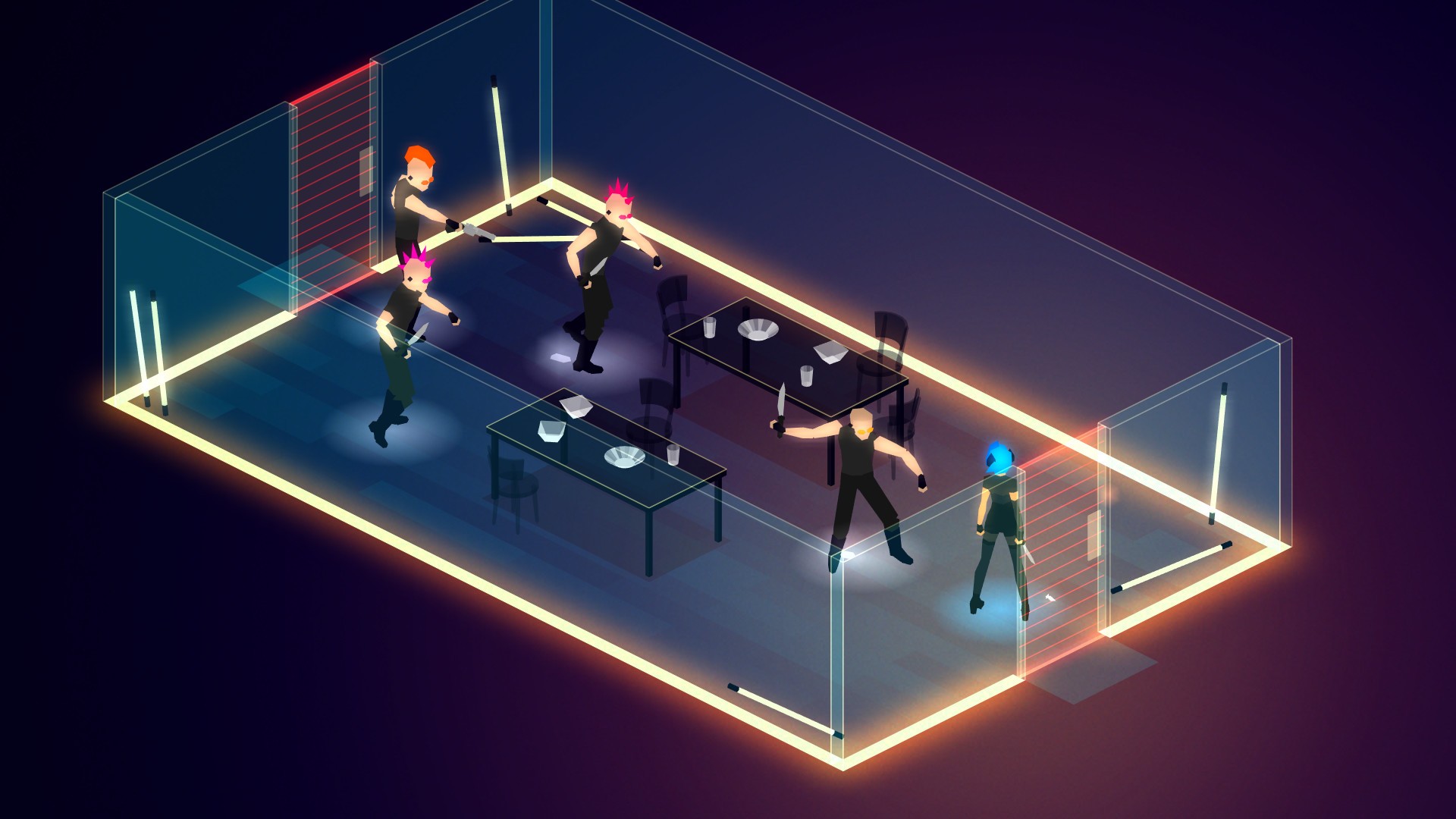 Lithium City is very simple – get from point A to point B. It’s an isometric, twin-stick action game that has you controlling a blue-haired android throughout a series of small, but beautifully designed corridor-like environments. As the levels progress you’re given new weapons such as knives and shotguns to combat new enemy types, and fortunately there’s enough variety within the short 2-3 hour campaign to keep each of the six chapters feeling fresh. Despite the simplicity of beating up bad guys as you progress, Lithium City uses every one of these gameplay tools to craft unique and fun puzzles that sometimes offer a surprisingly fun challenge. To complement this, you’re given a series of powerful dashes akin to a ‘Dark Souls Roll’ that helps you navigate combat scenarios and I have to say the dash is extremely satisfying and well designed. It has a weighty, but fluid motion that becomes even more fun to handle in the later levels, as it becomes more of a strategic tool to outmaneuver your enemies.

The gameplay itself is intense, fast, and brutal but it’s not perfect. For me personally on PC, the crosshair was way too small, and I’d sometimes lose it during more screen intensive battles causing a little bit of disorientation. Enemy damage, especially the final few enemy types, felt inconsistent. There were times although few, where it was as If I would move and be instakilled, but sometimes I wouldn’t which led to a little bit of frustration solving the later puzzles. Also, the screenshake when hitting enemies is horrible and jarring, but thankfully there is an option to remove it. Lastly, the final boss of the game is very anticlimactic. While the premise of the boss is really cool, the addition of its ranged attacks for me personally really negates the purpose of the intense 1v1 dashing duel that it sets up and it feels like a cheap way of making things difficult, without making it more engaging. 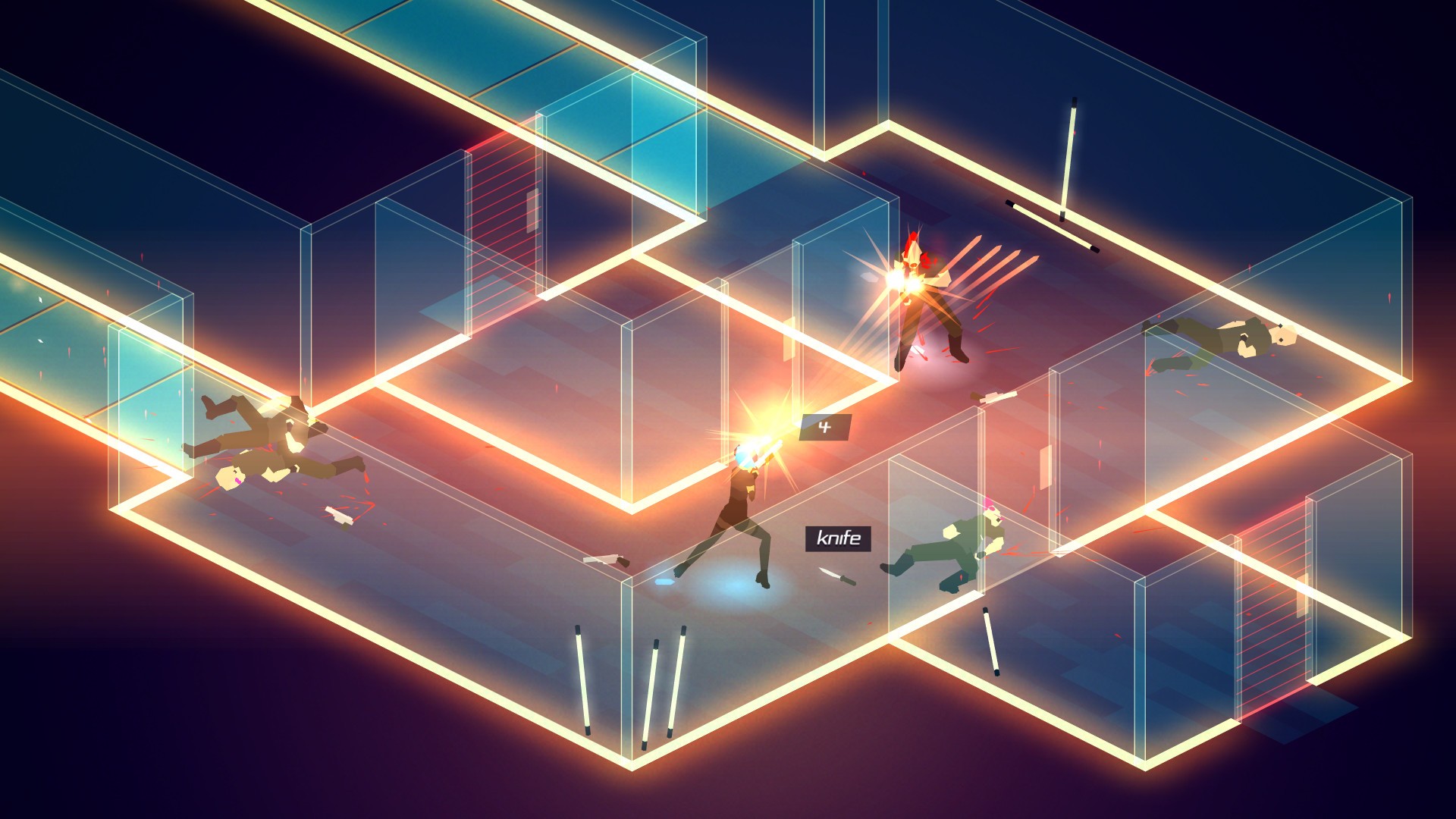 The visual design of the game is outstanding. The neon vibrancy really complements the low polygonal world and the environments are beautiful. Although player spaces are small and simple, the colours make every little detail in each room pop, and the sprawling, cyberpunk city that often appears in the background is illuminated by the same colour palettes and it’s just gorgeous. The audio design of Lithium City is just as brilliant too. Every gun feels weighty, and impactful. The slicing of a blade feels sharp, the shotgun is powerful, and the dash as mentioned feels both elegant and weighty, and all of this is expertly evoked by its fluid controls and stellar audio mixing. But that’s not all, Lithium City offers an original soundtrack that adapts to each level’s vibe and it’s extraordinary work for an indie game. The mixture of synthwave and retro electro music gives the sense of Blade Runner from an alternate universe where instead of it being dark and more eerie, it’s upbeat and colourful whilst still at times evoking a sense of mystery.

The big downside to Lithium City, however, is its minimalist story and narrative. As I mentioned, you’re playing as a blue haired, android girl who’s ascending a skyscraper. That’s literally it. Ironically, it does have a John Wick 3 vibe, and whilst some could argue the story is subtly woven into the level design, I simply think it’s just lazy. The addition of text, and narrative elements; something developer Nico Tuason considered in earlier builds, would’ve done so much to broaden the appeal of a game that is already both visually and auditorily exemplary. The player character simply having a personality or a voice that’s expressing motive would have taken things up a level even if the worldbuilding itself was limited by the games short running time. But there is nothing within its story design that comes together that draws you in or leaves a lasting impression which is extremely disappointing when everything else is so lovingly crafted. 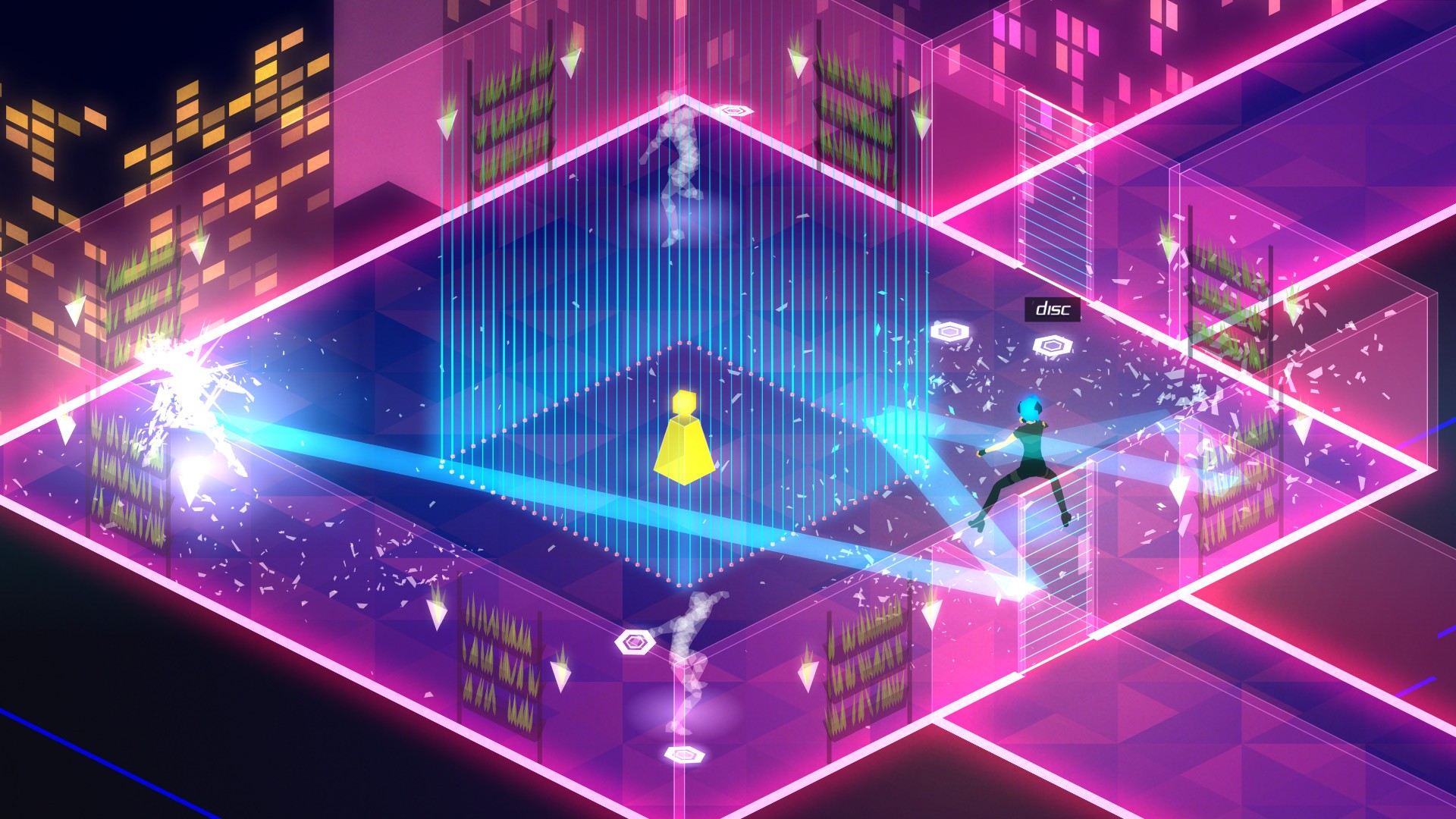 However, developer Nico clearly went through a lot whilst creating Lithium City. In a post that I will link – Nico goes into detail about his struggles as an indie developer and everything that surrounds their creation. The highs of success, the lows of failure and the effect it has on both his mental health and his family life as well everything in between. It’s a beautiful insight for those interested not only in the development of Lithium City but the indie game scene in general.

While Lithium City is a short game, it certainly leaves a mark as the credits role and has you wondering what could’ve been if a developer like Nico, had a budget and a team to create something bigger. Lithium City’s beautiful and vibrant, low-poly art-style set in a semi-cyberpunk world, as well as its stellar audio design, original soundtrack and its fast paced, clean gameplay shows the potential for something that could really be expanded upon. But perhaps Lithium City’s charm is simply that; it’s small, it’s a passion project and it’s a wonderful example of a man’s artistic expression throughout struggles with mental health and the perseverance that is required to bring to life a personal project without any real support besides himself, and his family – Nico, you can be proud in Lithium City, and I’d love to see more.

Lithium City is an exquisite example of one man’s dogged persistence in hand crafting a short, but memorable Indie Game experience.

Luke Hall no longer writes for Bonus Stage. We would like to thank him for contributing 1 Review during his trial period with us. Reviewers are an essential part of Bonus Stage and therefore we sincerely appreciate all contributions from reviewers/writers who in-turn help to contribute to Bonus Stage's success. We wish him every success with his next venture.