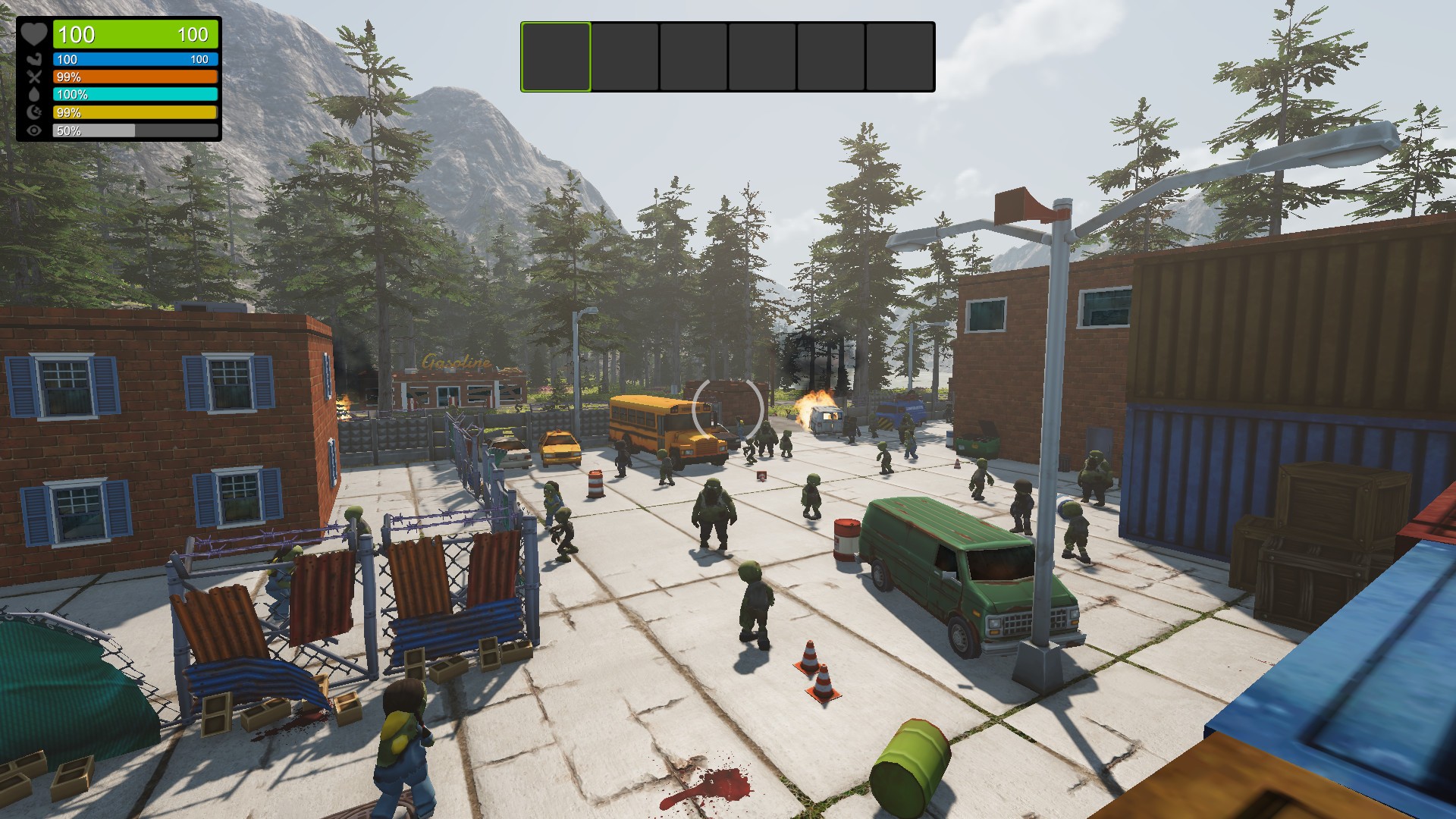 Zompiercer is a linear first-person survival game that takes place during a zombie apocalypse, where many mutated zombies roam the lands and so you find yourself forced to travel by train. This is one of the biggest features that sets Zompiercer apart from others in the genre, the fact that the train is not only your only means of travel but it’s also your home and base of operations.

Zompiercer doesn’t give you that much of a friendly start, as you pretty much wake up to the blaring sound of sirens warning about a zombie breach inside your base. As it’s often the case in these scenarios, you find yourself alone with no idea of what went wrong, and so you set off on your own aboard your train in search of other survivors. With that in mind, Zompiercer seems to deviate from other survival games in the sense that it seems to offer a survival experience with some focus on narrative. There is even some voice acting, but, at the moment, this focus on the story is very light, but I hope that is something that is expanded in the future.

Unlike most survival games out there, Zompiercer has opted for a linear approach to its gameplay. With that said, the game currently features four different locations which you’ll be moving through in order, almost like missions, but how you decide to approach and explore each one of them is entirely up to you. Do you see a train yard in the distance, you can go and check that out first, or, if you prefer, you can go in a whole different direction first and explore a nearby town. In the end, what matters is that you scavenge up enough supplies to make sure that you have enough for your journey, whether that be food and water or materials to craft new tools. 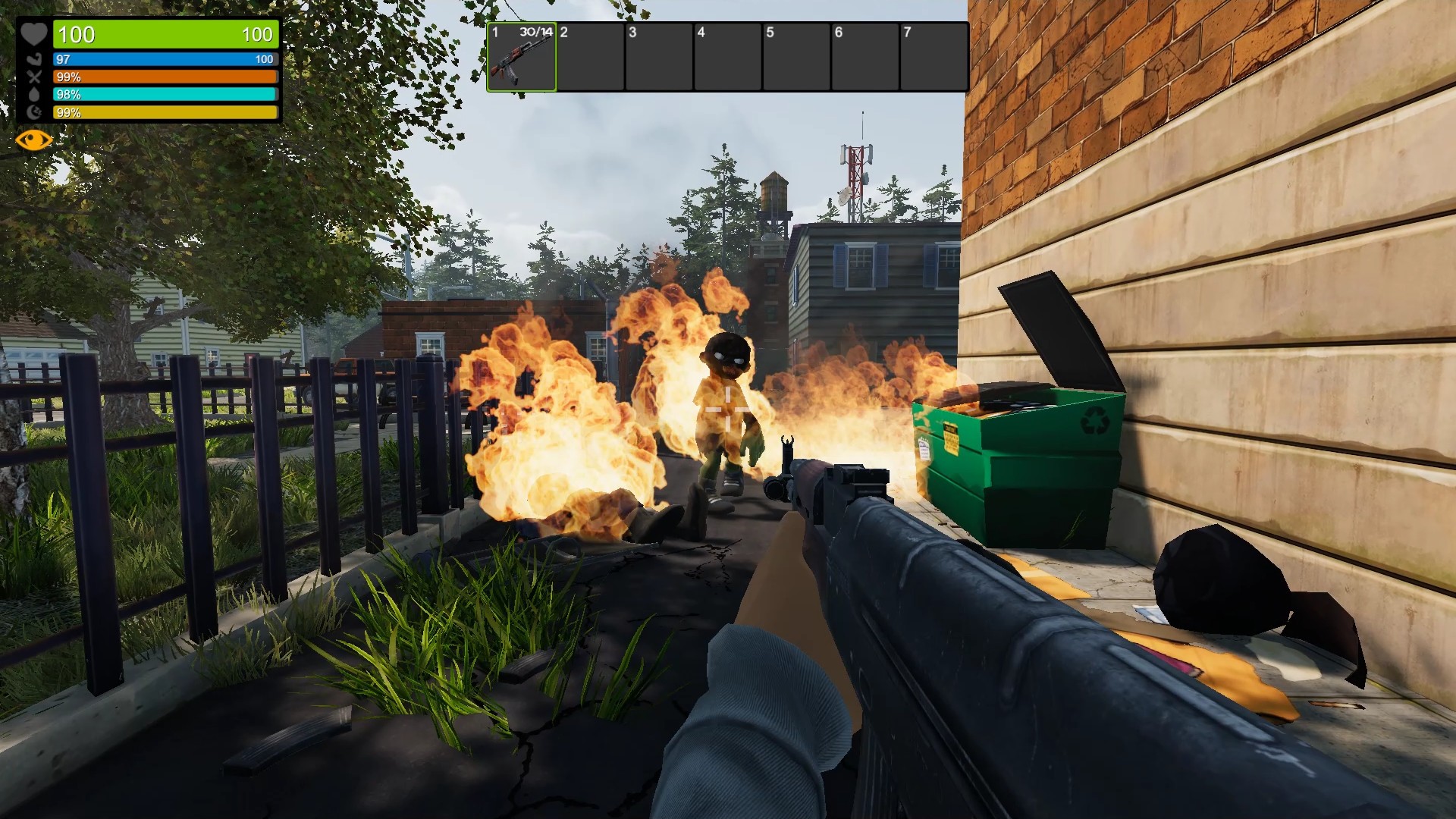 As a survival game, Zompiercer features pretty much what you’d expect from a game like this. There are indicators of hunger, thirst, sleep, stamina and visibility, and you can only carry a limited amount of weight with you, which can be expanded by equipping a backpack. Crafting also plays a big role, as you might’ve expected. As you scavenge buildings, vehicles, and crates, you’ll find raw materials which you can use to craft tools, weapons, armour and more complex crafting stations. All this is done aboard your train, so you can take the travel time it takes to get from your current location to the next to make use of everything that you’ve gathered, just make sure that you actually refuel your train, although that shouldn’t really be a problem. In any case, I’m not sure if I was just extremely lucky with the loot spawn on my playthrough or what, but I found that there were way more resources than I could possibly need.

Up until this point, everything about Zompiercer might sound enticing, but the game has some serious flaws which severely hinder the gameplay experience as a whole. For starters, there’s the game’s performance, which is quite appalling, especially when you take into account how the game looks and the fact that it really shouldn’t be the resource hog that it is. I was really surprised when I first booted up the game and experienced frame rate fluctuations but, after checking the Steam forums, I saw that I wasn’t the only one. Even people with high-end systems seem to have been experiencing issues running the game at a decent frame rate in low settings. This is definitely something that you should take into account and take advantage of Steam’s refund policy if you decide to pick up the game right now.

With Zompiercer’s performance out of the way, now it’s time to address its combat. Combateh co plays a pivotal role and is one of the most contrived things in the game. There is both melee and ranged weapons in Zompiercer, and both of these can be used in equal measure to deal with the zombie onslaught. However, while ranged weapons are absolutely fine, such as pistols and shotguns, melee combat is pretty unintuitive, mostly because it’s hard to figure out if you can actually land a melee hit with a dagger or a baseball bat without getting hit. Furthermore, there is also no way to block or parry. All you can do is dash out of harm’s way. 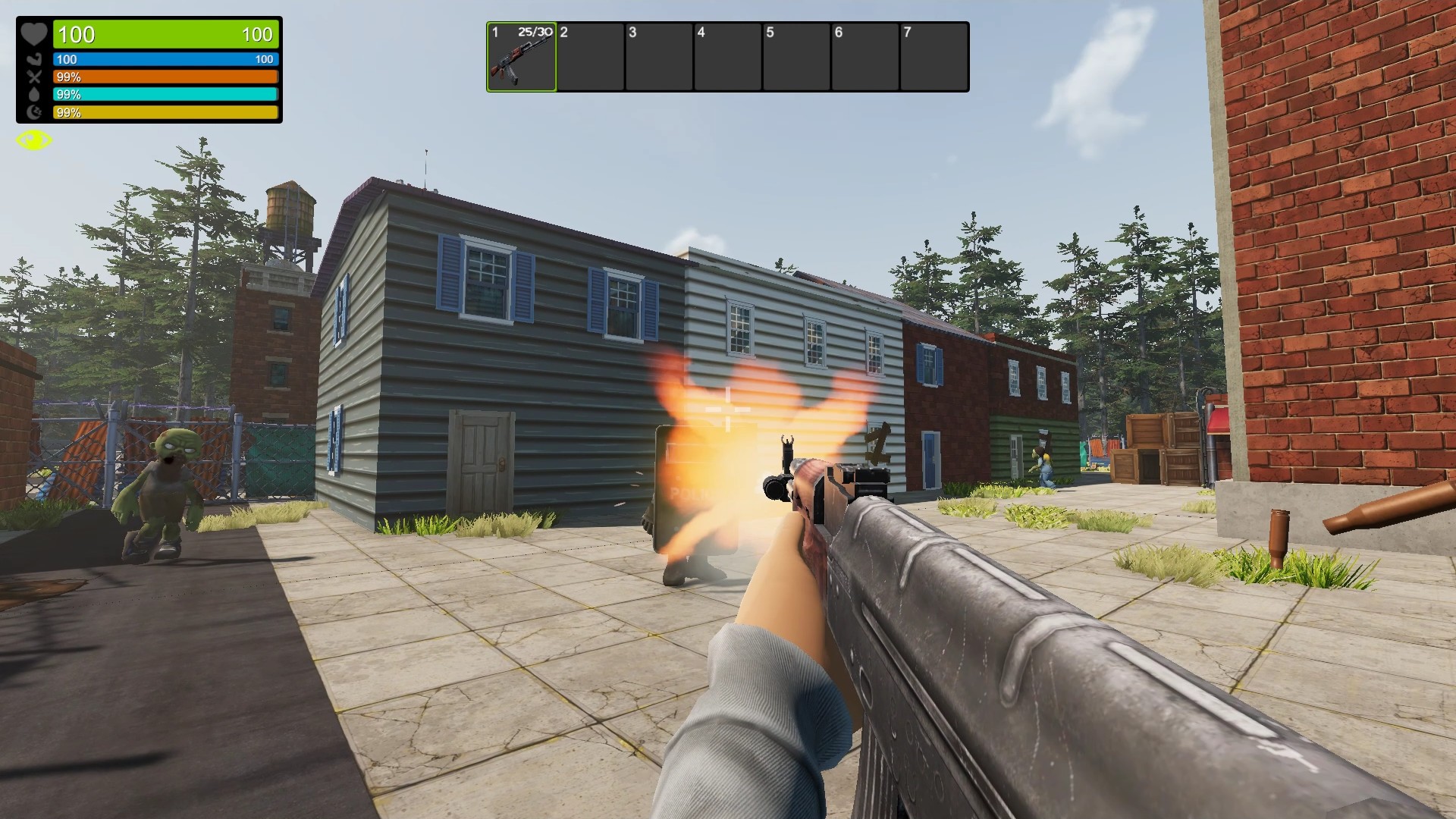 As you slay all the different zombie types, like the usual sluggish ones, to others which are faster and deadlier, to even armoured zombies, which are particularly hard to take down with melee weapons, you’ll gain experience and level up. Now, once you do, you can assign a point to either health, stealth, stamina or strength. This might not sound like much, mostly because it’s a straight up stat upgrade system, but increasing your stamina and strength is actually quite useful. This is mainly because strength increases your weight limit. As you’re scavenging, you’re severely limited by the amount of items that you can carry, which means that you’ll be making a lot of trips back and forth to your train if you want to loot everything in every single location. Likewise, stamina affects how long you can sprint for, as well as how often you can use melee attacks and dash, which is particularly helpful given that the game forces you to walk for quite a while which I’d say it’s one of the problems that I have with Zompiercer. There is way too much walking with nothing going on, as besides the key landmarks of each location, the maps are just a whole lot of nothing.

Speaking of which, and maybe it’s just me, but the way that Zompiercer’s looks has some discrepancies, as the buildings and landscape don’t really seem to match the zombies and your character’s cartoon looks. Also, the game features a day and night cycle, but I find it a shame that you have to either sleep to pass the night or carry a flashlight with you, as night makes everything absolute pitch black and you’re not able to see a single thing.

With about 6 hours worth of content at the moment, Zompiercer felt more like a chore to play through than something I actually enjoyed. While Zompiercer has a great concept and ideas, the game is really rough at the moment and I can’t in good conscience recommend it in its current state, but hopefully it will improve with time.