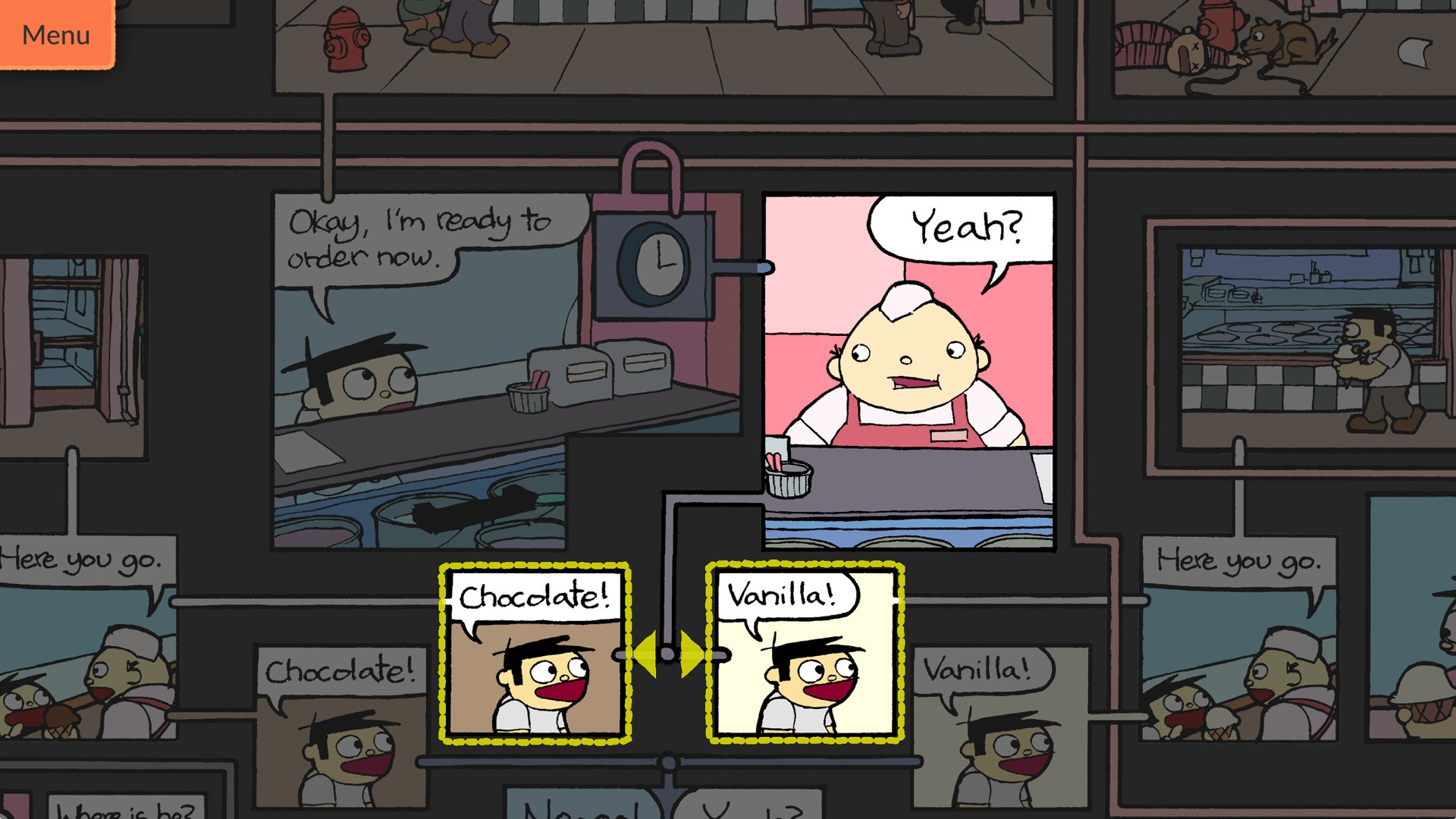 Interactive fiction has become an incredibly popular genre in recent years with TellTale Games and other titles like Life is Strange leading the way. Most of these games have taken their inspiration from TV as they present ‘episodes’ complete with a cast of voiced characters and tough decisions at critical points in the story. However, interactive fiction pre-dates these titles by several decades, appearing in print form as ‘choose your own adventure’ stories. It is this earlier iteration of interactive storytelling that Meanwhile takes its inspiration from.

In fact, Meanwhile first appeared in comic book form back in (year). A cult hit then it has now been reimagined in digital format, inviting players to explore the many branches of Jimmy’s story – a kid who just wanted to enjoy an ice-cream.

The game is presented as a comic strip and is a faithful representation of the original artwork and story. You begin by clicking through frame by frame as Jimmy enters the ice-cream shop. Your first choice soon appears – vanilla or chocolate? A pinging sound effect notifies you that the path of the story is about to change and yellow arrows direct to one of two (or three, or four, or more!) options. In terms of gameplay, that is about all you have to do – click, read, think, and make your decision. 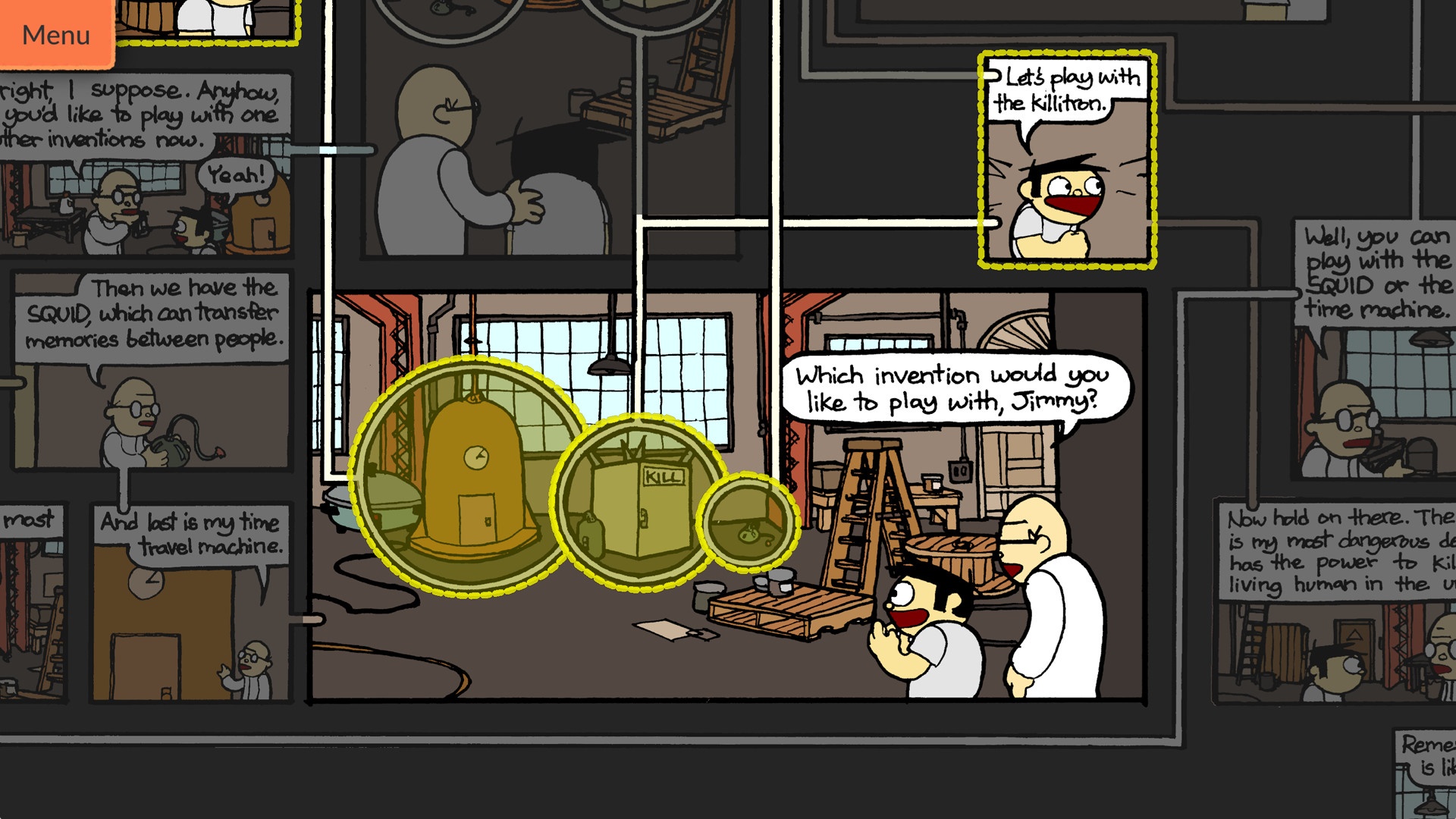 It sounds simple, and yet it is (as you might already expect) not… Some choices lead to quick endings, but others take you tumbling down paths like Alice through the rabbit hole. It is difficult to go into details without giving too much away, but a chance encounter with a mad scientist can lead to you exploring the paradoxes of time travel, the morality of being able to read someone else’s thoughts, and the potentially apocalyptic consequences of possessing a literal kill switch.

This game is all about reaching the different endings. Many of them end in disaster, but there are also happier conclusions – you just have to keep going back and trying different options. For a game like this to work, it needs to have an engaging story and thankfully, Meanwhile has just that. There is a generous dose of humour and surprising number of options and story branches to uncover and explore. The pursuit of a non-destructive ending also draws you back in as each play through reveals more about Jimmy and the inventor he befriends. If you play through enough times, part so the story that don’t initially make sense get logically resolved (like why is this inventor so willing to let this kid play with his powerful and potentially dangerous inventions?) and this makes for a satisfying story-based experience.

As you play, the story is laid out like a flow chart as you move from one frame to the next. Choices send you off in different directions, and occasionally bring you back to an earlier stage in the game (time travel paradox alert!) As you move around the flow chart, you can see other frames from story paths you have not yet encountered. Far from spoiling the game, this acts as a further enticement to play more as you see or read something that catches your interest and want to see how the story unfolds up to and beyond that point. 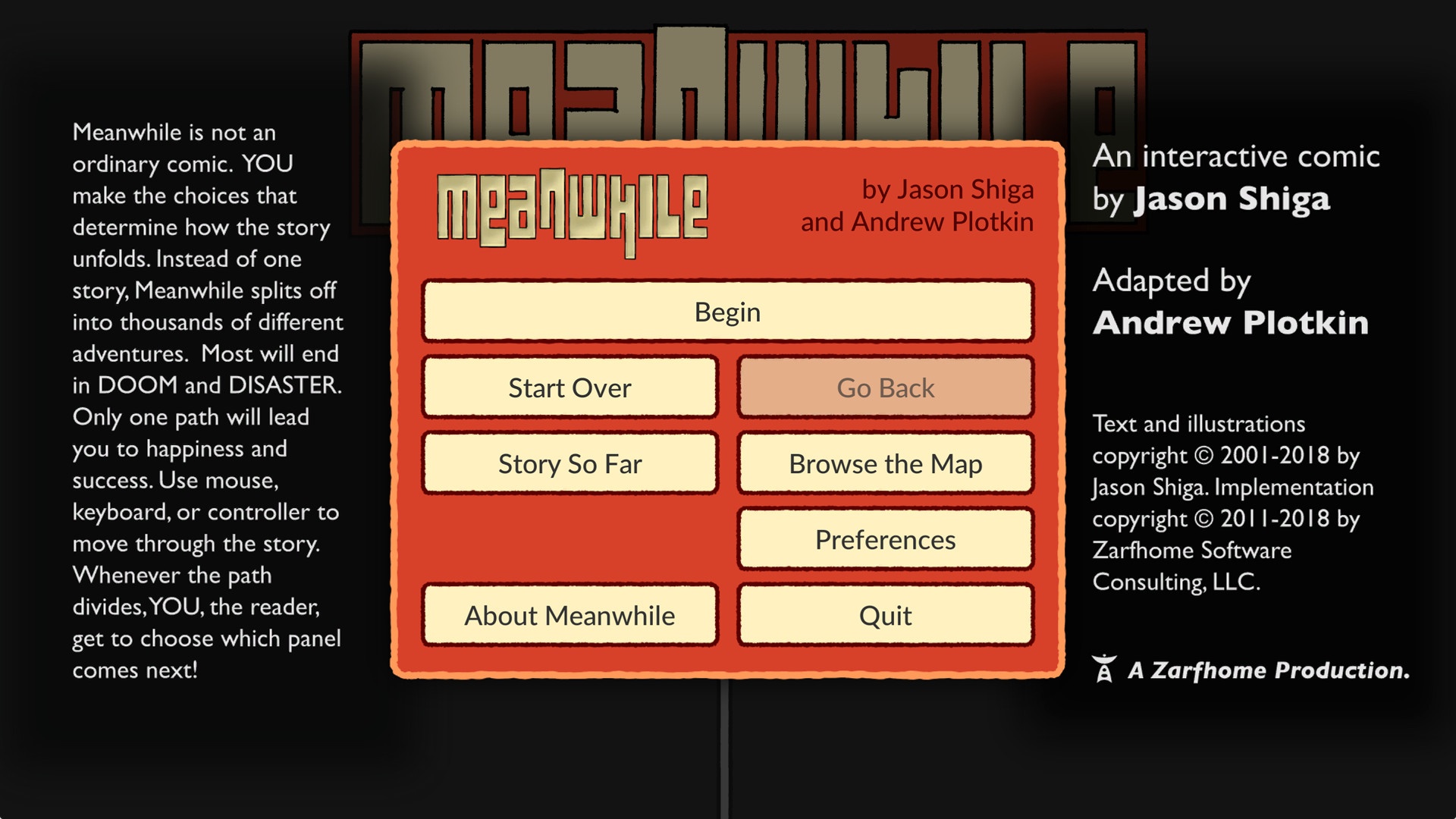 There are also options in the game to backtrack. Should you not like the consequences of your decision, you can head to the game menu and select ‘back up’ (much as you could flick back through the pages of a printed interactive novel). You can also access a ‘story so far’ summary which allows you to jump back to certain frames and explore alternative options. If you are really stuck, you can also ‘start over’. All this helps limit the frustration of a choice not panning out as you had expected or bringing you back towards and ending you had already explored.

As you rack up the different endings and explore the various options, you will uncover information that will be useful in the future playthroughs. While this may seem also like cheating at first, it soon dawns that it all fits in with the themes of time travel and memory reading. There is also the option to view the entire flow chart of the story as a map, which you can zoom in and out of at your leisure. This reveals the impressive scale of the story and the multitude of paths it can take.

Meanwhile is more of a digital representation of an interactive fiction story than an interactive game. That should not detract from what a great story it is, however. The characters and the humour are engaging, and the sheer range of possibilities far outshine the often superficial ‘choices’ that exist in modern episodic adventure games. This story is certainly one that is worth exploring, meaning only one question remains: chocolate or vanilla?