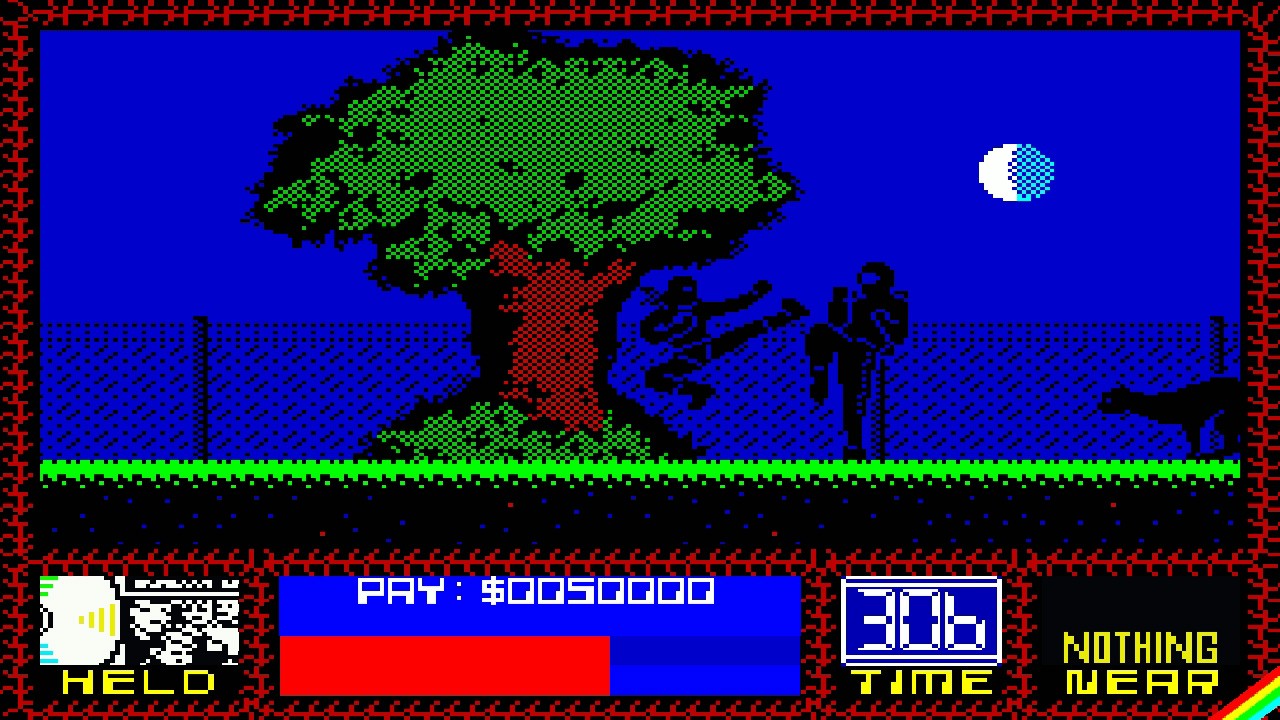 This is an interesting one, because I got to play both of the Saboteur games back to back. While fans of the series back in the 80s had to wait two full years between incarnations, it was literally a matter of getting up to grab another drink before diving out of the helm of one Saboteur and into the second one which dropped the exclamation point in favour of a number and a subtitle. Saboteur 2 – Avenging Angel. Taken from the idea that the ninja of the first game died and you are his sister out to avenge his death. Of course, you’re doing this by performing the exact same job he was doing before (you know, espionage) but this time it’s a lot more focused on computers. Like…a lot more focused. Like all you really care about, over 9 missions with tons of extra details, are getting to those computer screens. Don’t get me wrong, you do other things, like collecting items or not getting killed by traps, but I sure hope you like computers.

Like the first Saboteur, Avenging Angel gives you these beautiful, big worlds where you need to use minor hints and clues to figure out where to go next and why you absolutely need to write down what the objective says at the beginning so that you don’t forget. The Avenging Angel herself is a bit more adept than her brother, moving in a smoother fashion and having a bit more versatility in terms of action and movement. The game also improves a ton on the AI, giving enemies a stronger memory of the main character and what to do next. In the first, you could simply leave the room in most instances and you’d be safe from guards, dogs and robots alike. In this sequel, enemies will chase you to the ends of the earth if they have a clear path, and don’t you forget it. There was a particularly memorable time where a guard chased me for about five screens before I could successfully elude them, and that just seemed damn impressive. However, there was also a time where I was on a ledge above the guard, well out of their reach, and they just…kept shooting. In a straight line. Where I wasn’t. So the AI wasn’t perfect, it was just more aggressive. Alright, I’ll give you that. 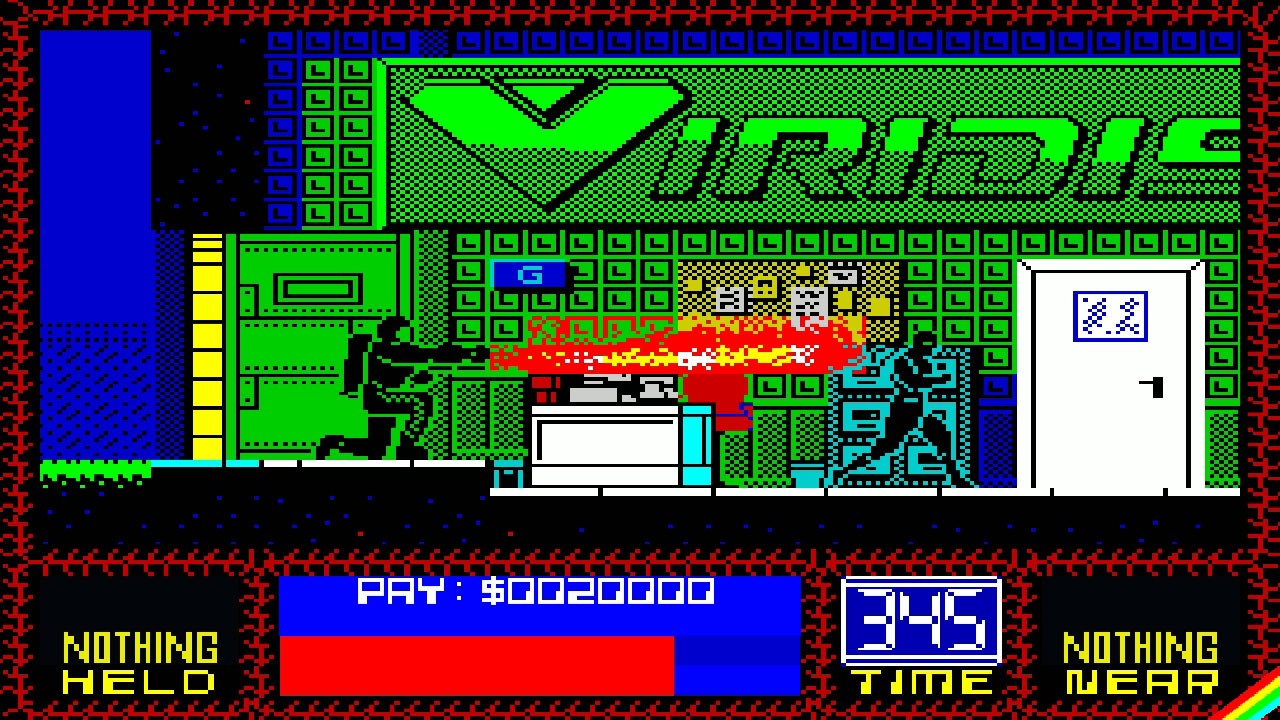 The controls are tighter than the original which is incredibly helpful with how much extra manoeuvering needs to be done. The Avenging Angel navigates in spots where you need to turn on a dime more, get to ladders faster, and dodge around murder that much quicker. Thanks to better animation styles (and better graphics overall), the effect is noticeable and enjoyable. You slide and glide around areas, you can control your fall a bit to angle to better landings, and your jumps and kicks are more fluid. The player is transported out of the retro mentality of the game and, instead, gets the real feeling of something being an homage and not just a straight up old game. I think that’s commendable: if a game feels new but just appears old, that means that the play becomes timeless and enjoyable throughout.

Also, the combat aspect of Avenging Angel is far more tenacious than the first. While Saboteur could often dispatch enemies with a single thrown object, most of the baddies you encounter in Avenging Angel will not go down easily. Even if you get a shuriken right in their damn eye socket, they’ll usually only drop to about half health and then keep coming at you, forcing you to get into grappling matches that aren’t easily won. If you get the first hit and can keep them coming, you’ll usually be able to succeed and get a tidy bonus for taking them out. If, however, the enemy is faster on the gun and gets a few shots (or flamethrower strikes) in first, you’re doomed to die. Get the hell out of there. The dogs are stronger and faster now too, so the annoying pooches from the first game turn into straight up hounds of war this time around. For a game that came out of a time where reinventing the wheel was a death sentence for game sequels, it’s both impressive and refreshing to see that Townsend took such risks with improving and improvisation to making the game work in a different direction. It’s also really cool that he killed our protagonist from the first game and make his sister the vengeance executioner in this sequel, as it shows a good amount of forward thinking in terms of how games would evolve.

SimFabrics and Clive Townsend gave Avenging Angel a similar treatment to the first Saboteur in this Nintendo Switch release, which results in extra filters, extra game modes and, of course, expanded levels and areas. Those first few aspects are great and fit in well with the mission statement of putting out this classic game onto a modern system with plenty of goodies to help old school fans feel right at home. Remember, Saboteur 2 – Avenging Angel was released in 1987 on a bunch of consoles that were successful and memorable, but not necessarily widespread. Coming from someone in the North American area, the NES had a stranglehold on the market at that time, with the Master System almost nowhere to be seen and the Commodore 64 and the ZX Spectrum being just whispers that I would read about in magazines years later. MS-DOS? That’s where you practiced work, not playing games. Having these filters to not only see what the beefed up version of Avenging Angel looked like on other consoles, but also to see the way it would have performed is really cool, and I appreciate it. 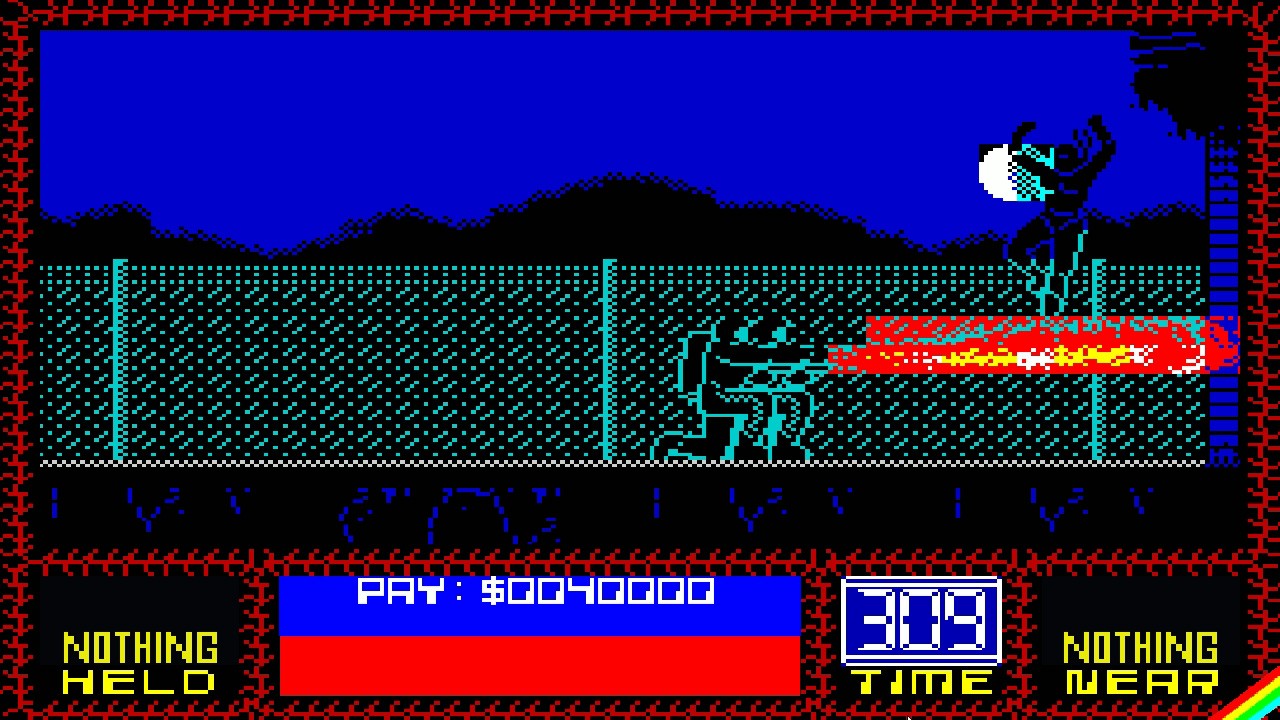 However, I think that Avenging Angel does not benefit from the larger levels and increased worlds in a way that the first Saboteur does. Avenging Angel was already a massive increase from the first game, adding a ton of screens and areas to make this exploration adventure a real test of mental stamina and recall. As a result, the interior shots were already packed with different kinds of office-esque rooms, storage facilities and servers, while the outdoors was a careful balance of purposeful dead space and thoughtful inclusion of entrances and exits to the main meat of the game. Now it feels like a lot of space has been copied and pasted, expanding the levels into these meandering wastelands. Granted, I didn’t play Avenging Angel when it was released, but I would be shocked if the game actually included eight screens of walking across the same tightrope, not letting you stop moving lest you fall for an additional six screens to your almost certain death. It felt less like “this game has been expanded as per the developers visions” and more “this game is big, and therefore is better.” I could be wrong and that is the intended layout from the beginning, but, if that is the case, it wasn’t well constructed.

I think that players should consider both of the Saboteur vehicles as independent works that can also be considered in a pair. Saboteur 2 – Avenging Angel is a stronger take on the path that Saboteur set out to forge, creating new objectives, easier to read text, a more interesting protagonist and some great graphical and sprite design. I didn’t enjoy the levels as much, and the combat was far more difficult, but neither makes it a bad title, just different. If you’re intrigued, be prepared: the third one arrives in just a few months, over thirty years after the originals.

Saboteur II: because sometimes international crime runs in the family.