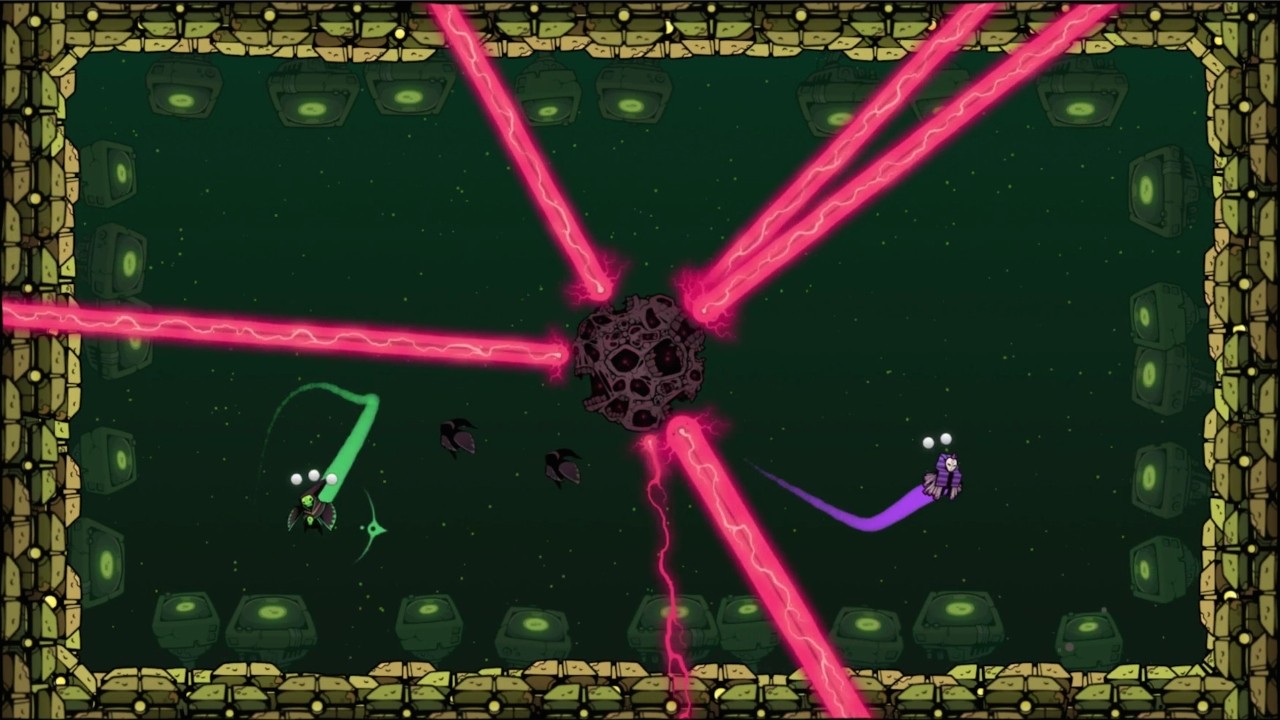 Party games are a weird genre; they are usually purely built for multiplayer without offering much for single player. This means players are expected to have someone to play them with or just have them sit in the library forever. Gurgamoth is no exception to this; originally developed for a game jam, it doesn’t really have that much content, though it still works as a time killer.

Gurgamoth has little in the way of a story, its focus being on gameplay. What can be gleaned from the game is that players are attempting to sacrifice each other in order to summon the eldritch god Gurgamoth. This little tidbit of lore can be completely ignored and is no more than a sidenote, after finishing a game. But still it influences the looks of the game as a whole.

This is done through the backgrounds which, while simple, still show details for those that bother to observe. Most areas have eyes sprouting out or general details hinting at the nature of what is happening. As with the story, it is no more than a “hey look, cool” note without real importance, but it’s welcome nonetheless. Sadly the game doesn’t offer that much in the graphics department, there are only 7 stages and 6 characters, though they’re well designed albeit a bit samey. 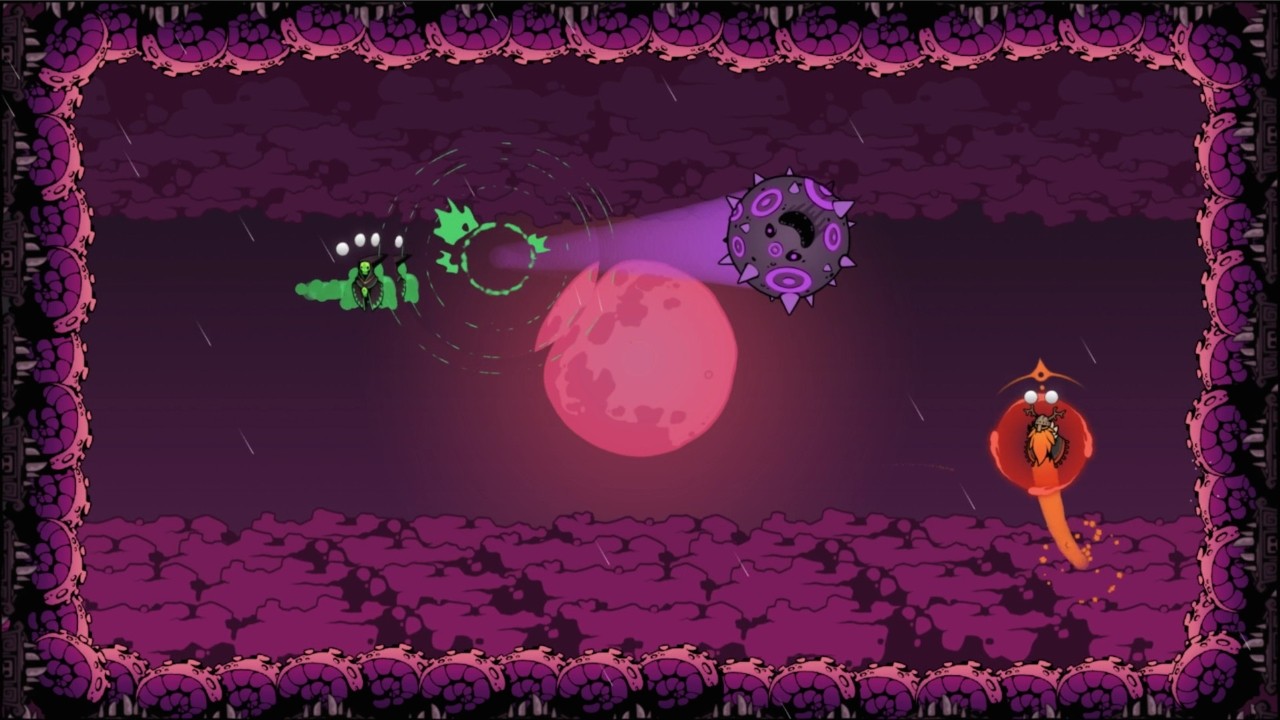 Staying in style, the soundtrack doesn’t comprise many tracks, though they are not bad. Some do get repetitive, going for as long as 6 minutes with the same sound, but the quality is there. SFX are all right, though too loud at times with the default settings; the screams of defeated opponents, more akin to squeals, are often high pitched and bothersome.

The gameplay itself is, again, simple. There are only two buttons required and the joystick for movement. Players can dash, shield and bump; the objective always being to slam opponents into environmental hazards. If a player times a shield as they get bumped the opponent loses all their attack charges required to use the bump.

These environmental hazards vary in each of the levels, one may have spikes and the following a big laser ball. The core mechanics obviously don’t change from level to level, but the approach must in order to survive. 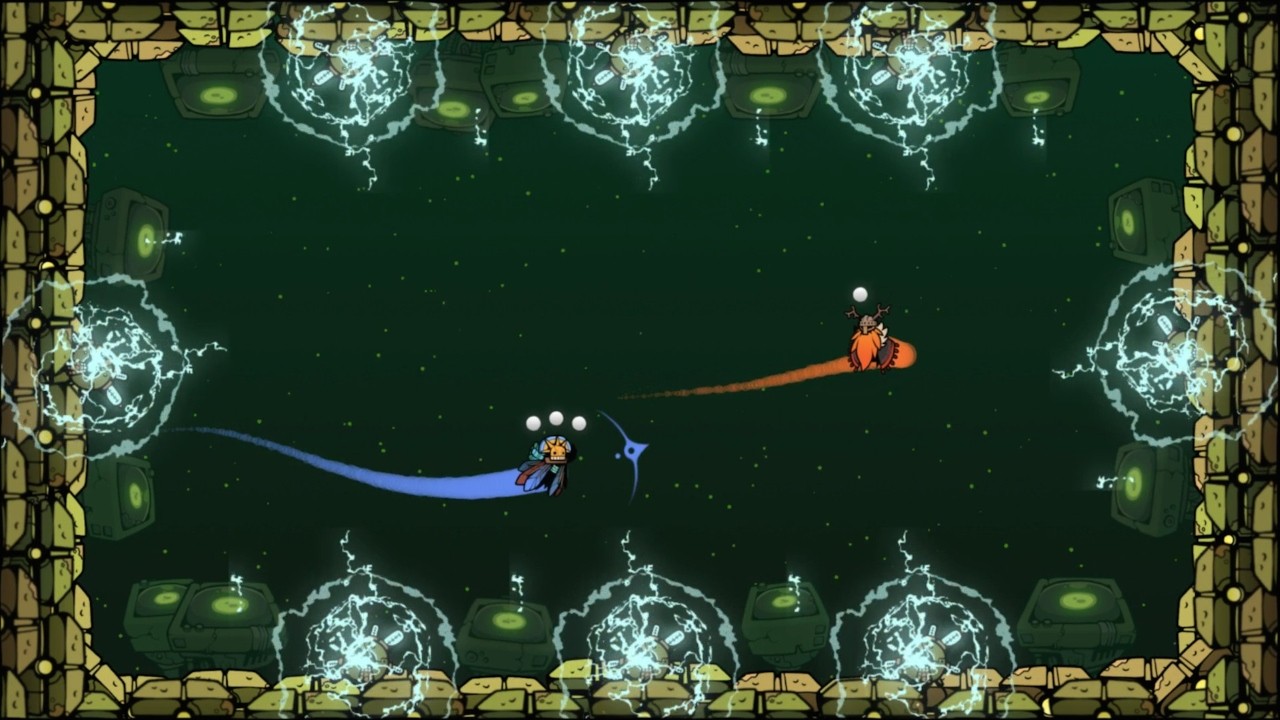 Adding a bit of oomph to the gameplay, there are also a few pickups which appear randomly during the game. All but two of these affect all players, making it very possible to have them backfire. The different effects are pretty straightforward, containing a freeze zone, a time slow, a shield, unlimited attacks, a spike ball and a laser shooting ball. Going for these items in the chaos of battle is risky on its own, making players gauge if the payback may be worth it.

Gurgamoth can be played by up to 4 people locally, with no online option. Any remaining slots not covered by players will be filled with bots unless they’re explicitly disabled. These bots also have difficulty options, allowing the player to choose their own challenge. As previously mentioned Gurgamoth is still a party game, which means these bots are a poor substitute for actual human players, but it’s still a useful addition.

Overall, Gurgamoth is an entertaining little game which can be used to kill a pair of hours with friends. Other than that, there is not much to say about it; it’s the definition of a jam game, made to offer some simple gameplay and entertainment for a bit. The sale price of £7.99/$10/€8.91 is somewhat expensive for the content offered, but it’s definitely an all right purchase on sale, usually going for around 1 quid.

Gurgamoth is a small indie party game which offers quick matches for up to 4 players in a free-for-all style.