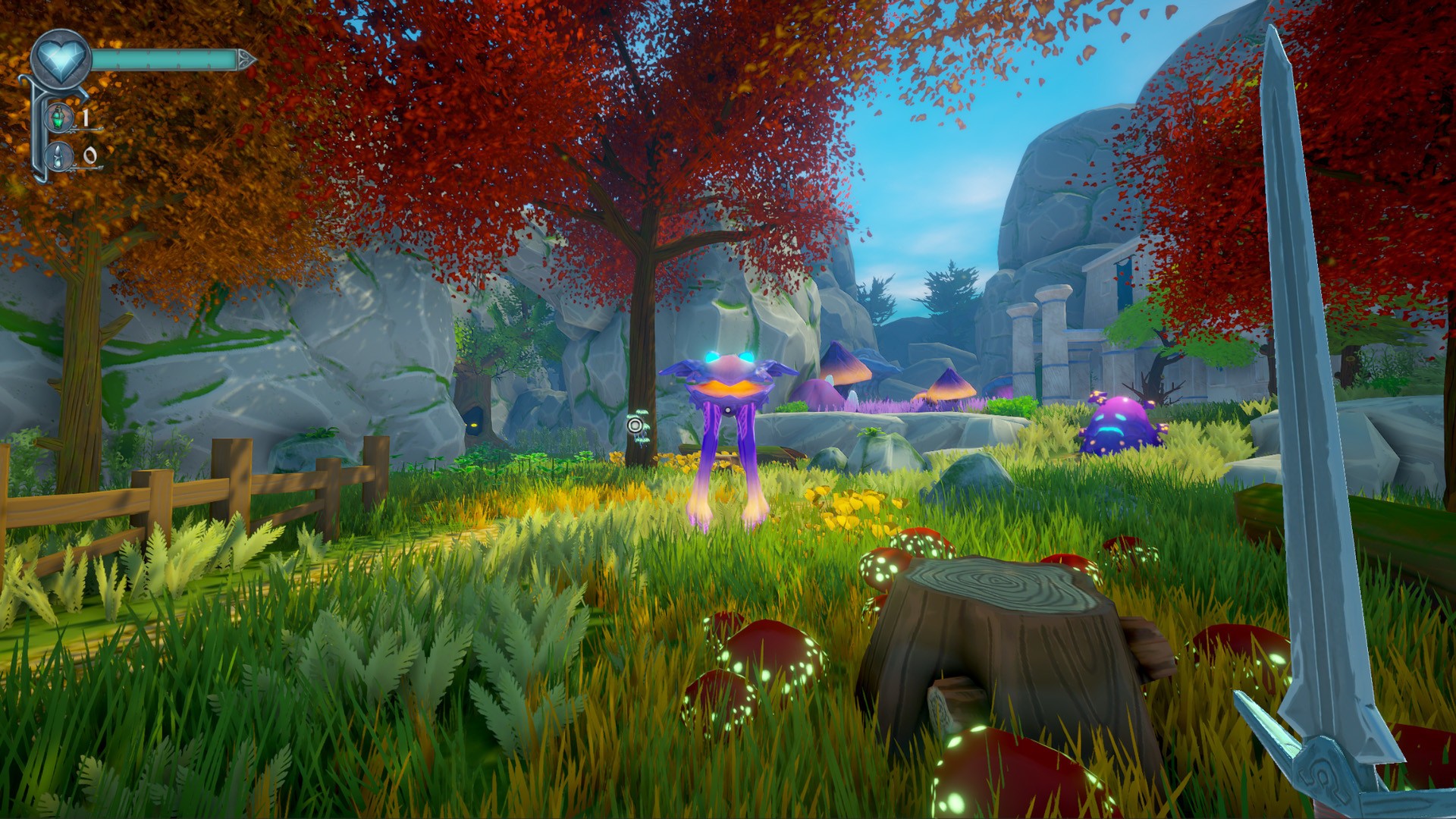 The gaming market is saturated with so many adventure Role-Playing Games, that it’s hard to choose which one to play. Most of them follow a generic storyline, and there is a distinct lack of originality. My latest review was offered to me by the publishers Sometimes You, and I accepted it without looking at the game type or what it was about. Mask of Mists is a short retro exploration, adventure title with RPG and puzzle elements. It has been developed by 9 Eyes Game Studio, and is distinct in its approach and simple storyline.

Here comes the “original” plot hook. You are a mercenary who has been sent to find a missing person, namely an Archmage from the academy. The area that he was exploring was full of poisonous gases and magic. To make things worse, monsters from the Abyss are roaming free and causing all sorts of mischief. On your journey of discovery, you must solve the puzzles in front of you, unlock new areas, and enter several dank dungeons. The gameplay style, plot, and premise are well tested, and gamers from the era of the Amiga and Commodore 64 will feel at home with every single element of this retro treat.

As you delve into your adventure, you will find notes and scrolls that will give you clues to solve some more complex puzzles. You will be told that you must activate 6 crystals that can only be found underground. Therefore, you must be prepared to crawl through several dungeons. The game follows a linear path, except for some looping back as you find hints, and keys in different areas to help you progress in the story. You are provided no map to help with this exploration, but the layout of the world is so simple that you really do not need to worry.

There is very little in the way of mystery, and the biggest confusion comes when you enter an area that you shouldn’t be in. A puzzle will block your path, and you will not understand how to resolve it. A quick scout around, and the solution is usually found, if not just turn around and head down another path. Most of the trials are similar in approach; turn and twist objects until they match the pattern, or move items until they are in the right location. None of them are overly taxing, but don’t be put off by the simplicity of the task at hand, as they are fun, and this title’s enjoyment comes from the adventure elements. 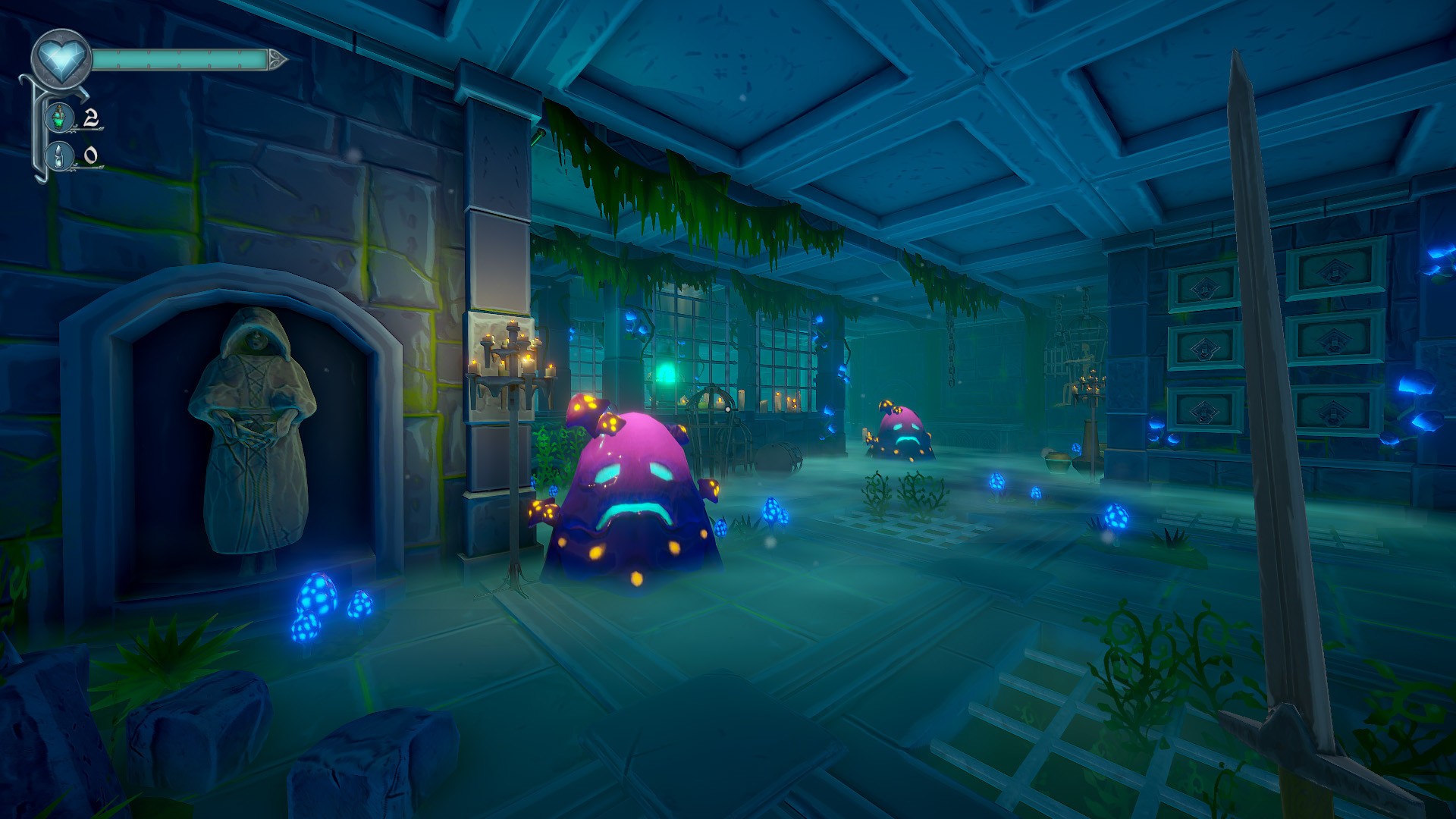 Now I mentioned it as an RPG, but in all honesty, these traits are few and far between. Your character has no level progression, and no perk tree. He has a health bar that can be increased by finding mystical stones in different areas of the map. These give a permanent upgrade and are worthwhile. You find both a sword and pistol in chests that are lying around. These are improved as the game goes on, but don’t go into this thinking it’s going to be loot heavy, as it really isn’t. At best, you find jewels, and a limited supply of health potions. Though you’re not a mage, you find recipes to use the alchemy benches, and these potions will help you to improve your character and to venture into new areas.

Very little about this title breaks new grounds, but it didn’t matter to me. What it produces is a solid and fun experience that keeps you moving, thinking, and fighting. It had a Myst crossed with Zelda feel, though much more straightforward, and with a lot less challenge.

I’m sure by now you understand that Mask of Mists is a classic retro title. Not only is this in the gaming mechanics, but also in its visual presentation. Played out in a first person perspective, you venture around a world of colours and simple shapes. The weapons you use hang in front of you, which are reminiscent of classic adventure titles like Dungeon Master and Ultima Underworld. This may not be everyone’s cup of tea, but as these are the foundation that makes up my gaming career, and I loved every minute. The over-world uses a garish and bright palette to emphasise the magic that hangs in the air, whereas the dungeons use a much earthier and darker tone. This helps to set a much more ominous and sinister atmosphere. The few enemies that you encounter have a vivid appearance, but all look very similar. It was a shame that the developers didn’t treat us with a little more variety on the monster front. As you move from area to area via buildings, or caves, you see that the transition is not seamless. The action is interrupted with a loading screen, and you are left waiting while the next part of your adventure loads in. I’d accept this, if it was an older title, but as it’s just released, I expect the game to flow much smoother.

The audio follows suit. An airy piano music gives the impression of a light and magical air to the world you are exploring. It is neither too slow, nor too fast, and allows you to view the world at your own leisure without a feeling of urgency. The sound effects work well with the theme and the genre. The swish of the sword and the boom of the gun are as expected. The constant tap, tap, tap of your feet on the floors are ever present. The monsters screeching won’t fill you with dread, but they stand out from all the ambient sound. It will not win any awards for being original, but it’s suitable, if not a little repetitive. With this being such a short title, it gets away with it just about. If the developers had a greater variety of enemies, then this may have opened up the chance to experiment more. 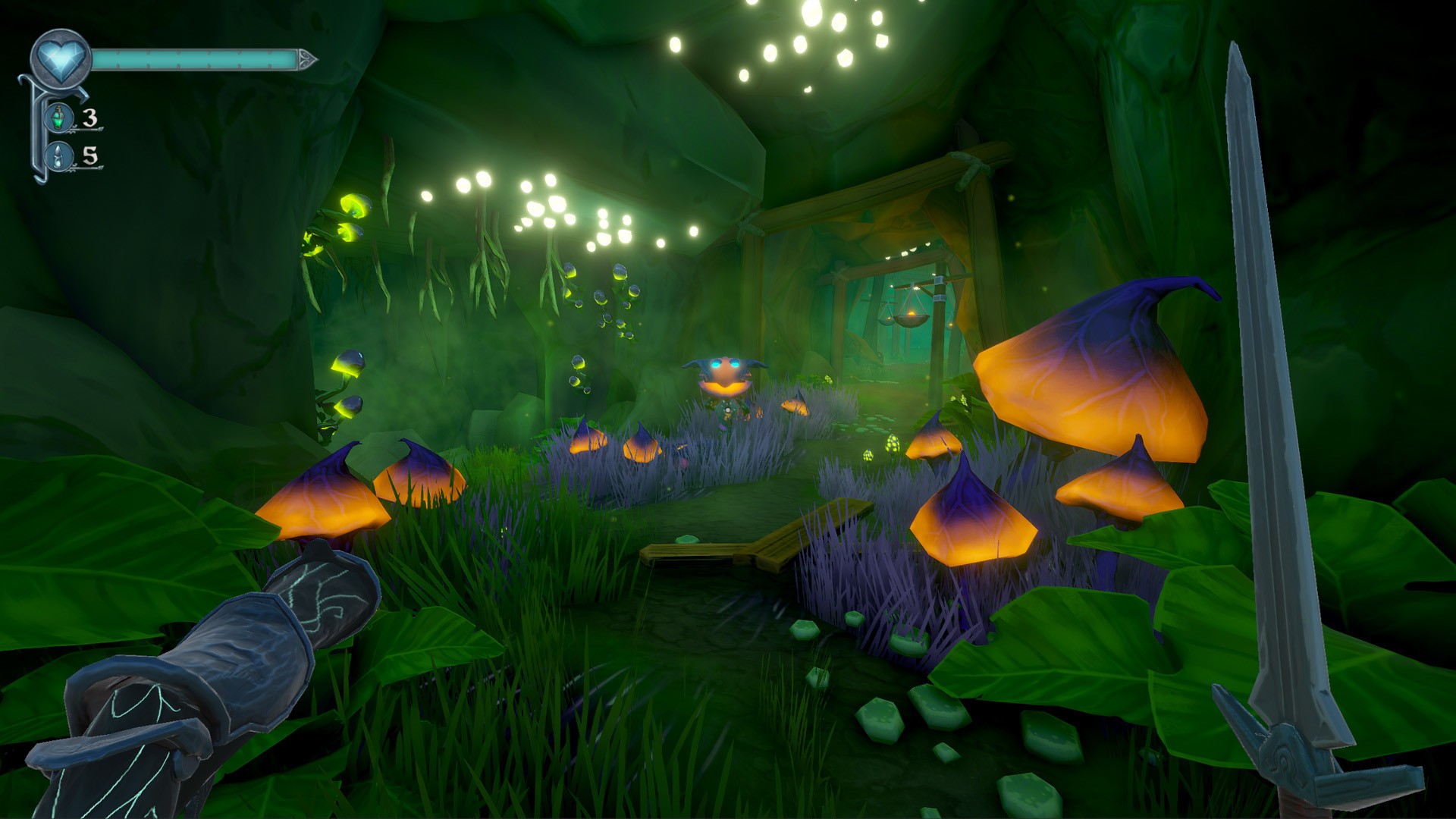 The first major element you will notice, after the glorious old school imagery, is the speed at which your character moves. Usain Bolt would be impressed at his 100 metre dash, and his ability to turn on the spot. The controller sensitivity is set way too high, I know what you are thinking, “Just turn it down then!” Genius, let’s look through the settings…….”ARGHHHHH” there is no option to lower it. You get used to it, but wow, the protagonist is twitchy. Other than this, it’s a regulation title, with easy-to-understand controls.

You have free rein to explore this rather compact land that contains; many houses, several dungeons, and lots of secrets. This will take you around 4 to 8 hours to uncover all the mysteries, solve the puzzles, and complete your mission. It’s a lot of fun, but does it have much replay value? Not really, no. This isn’t so much the game’s fault, more a curse of the genre it is in, and the linear approach it has taken. Once you have experienced everything, unlocked all the achievements (which you’ll do on your first playthrough), and finished the game, there is very little to make you want to return. Luckily, the first run through is good enough to warrant you trying this in the first place.

Is there room on a modern day console to play something that should have been made in the 80s or early 90s? For me, yes, there is. I love all indie titles and think it’s good to return to a classic gaming style every once in a while. Though this title is short and basic in its approach, it has a classic charm that needs to be experienced. Don’t buy this expecting to get a Skyrim style game, because it won’t happen. This is a casual adventure title that allows you to finish it without having to invest 1 year of your life. Do I recommend that you play it? Absolutely! I enjoyed every minute, even if the controls were far too sensitive. Can you complete your mission, and save the Archmage, or is he destined to be lost forever? Grab your sword and pistol, it’s time to venture into a magical world of the unknown.

A retro adventure title where you must enter a magical world to save an Archmage who has gone missing. A classic that would be suited to the Amiga or Commodore.