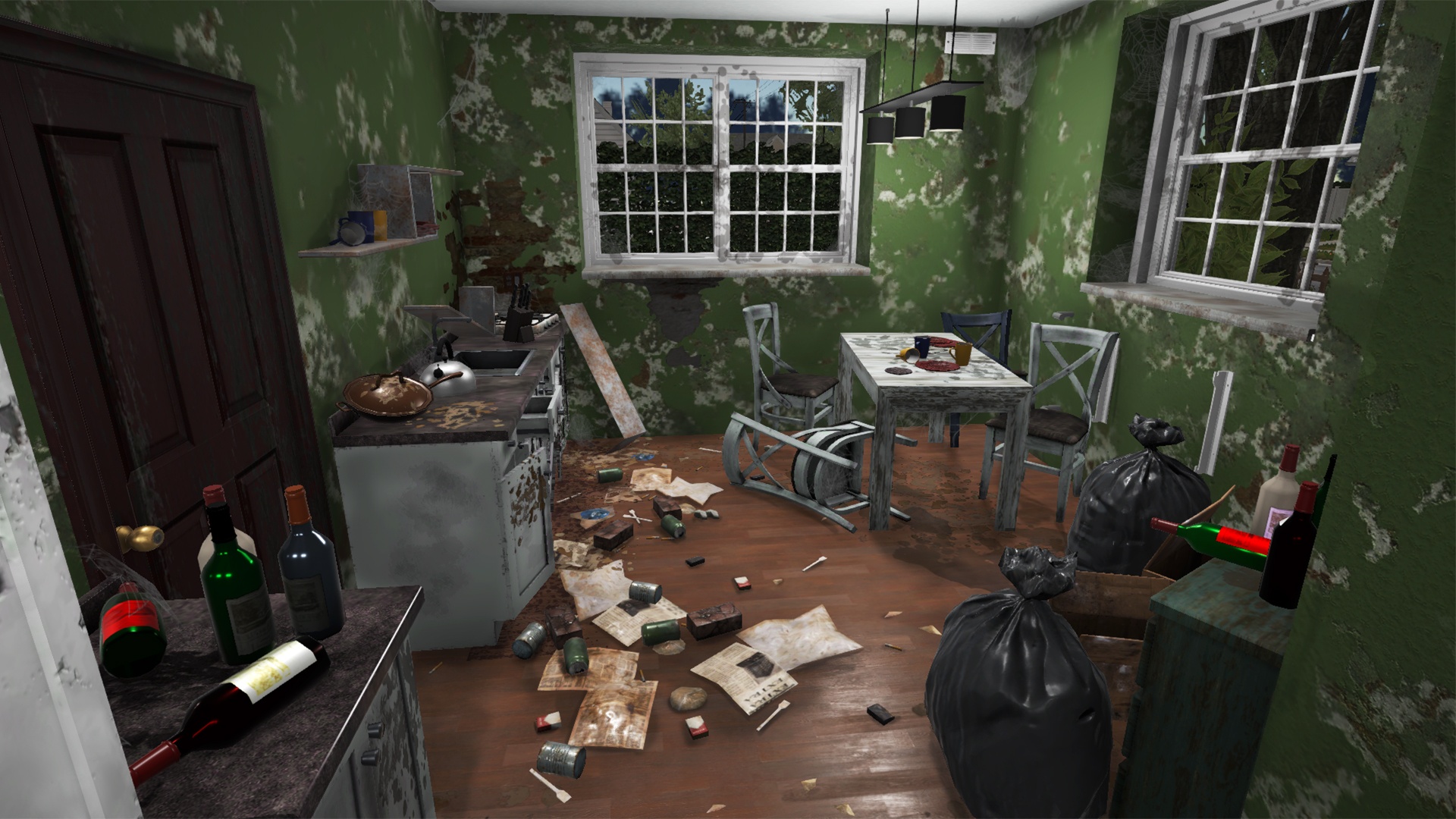 Have you ever had the desire to purchase a dump of a house, just to clean it up and sell it on? I mean one of those ones that look like run down with rubbish everywhere and filthy as you like. Usually we can’t fulfil this dream for a number of reasons; mainly cash flow or more importantly, a lack of skills. Worry no more, as Polish game developers Empyrean has created the title of your dreams, House Flipper.

House Flipper has the wannabe property developer tackling the housing crisis, one dwelling at a time. You must take on jobs to help the local community to improve their homes, whilst completing your own development projects in order to turn a disaster hovel, into the property of someone’s fantasy. Depending on the level of the task at hand, different jobs will be required to help to complete each stage, from; cleaning, painting, tiling, plastering and much more. You really are free to do what you want, as long as you complete that checklist.

You are welcomed into the world, by what can only be described as a decimated shed, this is your opening property, and office from where you will build your empire. You are given the opportunity to practise your skills from here, or like me, you can leave it as it is, and get straight on with making some money. The beauty of this title is, there is no storyline. You are free to do what you want, complete all those jobs first to build up a bit of a cash flow, no issue. Or decide to buy the cheapest property possible and try and flip it to make a profit, again no problem. This beauty, is also its limiting factor, let me explain; Other than the 19 jobs on offer, and buying and selling up to 20 houses, there isn’t anything else for you to do. You don’t get to buy a plot of land and build the house of your dreams, and the Garden Flipper DLC that is available on the PC, isn’t available for Xbox One, so gameplay options are limited at best, that being said, if you are into DIY and house renovations, then there will be plenty to keep you going. 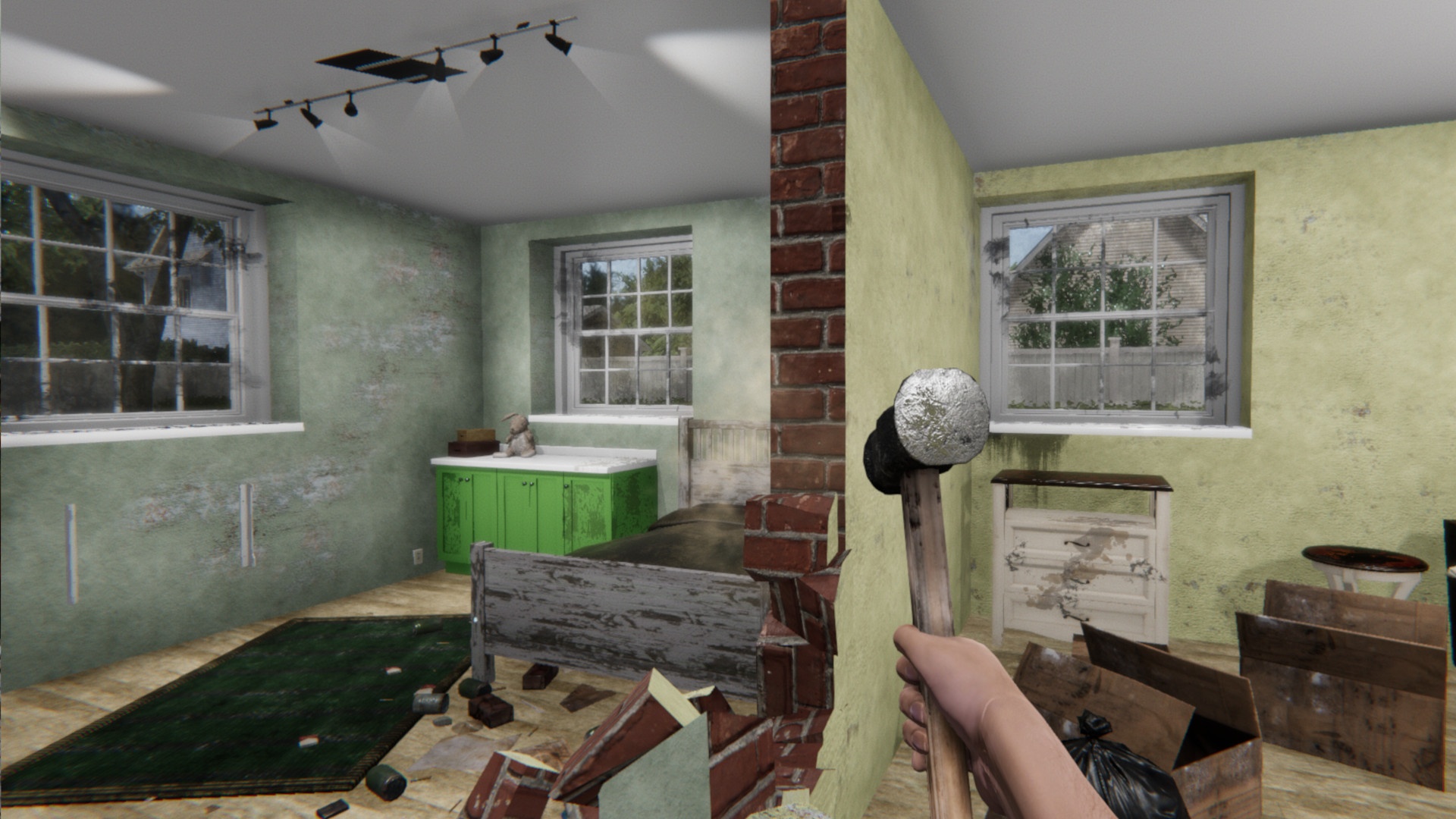 You begin your journey as a jack of all trades, where you are slowly introduced to each skill set. Your character has a perk tree that develops as you spend time completing any particular task. I’d highly recommend working on this from the beginning as it makes play considerably easier, and eliminates a lot of the repetitive elements, and trust me there are a lot of them. I found the perk tree an amusing area as it developed you from being your average Joe handyman, to some sort of superhero master tradesman. Though this did make the game considerably more enjoyable to play, it did remove a lot of the realism for me. Some of the jobs given to you are fiddly, and quite frankly mundane, the tiling was the prime example. The arduous task of having to place your tiles on the floor, and then select one tile, find where you wanted to place it, and then attach it to the wall. This process would repeat until you finished the room or ran out of resources. It never felt smooth, you were constantly forced to look around the room and for me at least the job was always met with a despondent puff of the cheeks.

For the few negatives House Flipper was oddly addictive, and mostly a positive experience, which I did play to completion. This was certainly aided by the odd unintentionally placed comical moment, like when I was tasked with knocking down a few walls in an old gents house, I went too far and made his bathroom part of the open planned design. This made me chuckle like a school child, and what made it better was when he paid me in full for the wonderful job I had done. Who says that open planned toilets aren’t in this season.

I spent some time observing the PC version of this before receiving my copy, mainly in preparation for what I was getting myself into. When watching I noted a few key areas that are missing or much improved in comparison to the Xbox One. The glaring one is the graphics, on the PC the game looks highly detailed, and plays extremely smoothly, unfortunately this can’t be said for the version I played, it was smooth enough, but occasionally very jumpy in places, also the graphics just looked a little fuzzy and dated, especially when you zoomed in for a closer look. The other area which was of great disappointment was the missing DLC, now you may think why do I want to be able to renovate the garden as well as the house? For me the new content allowed the player the choice to work every area of the land they had purchased, not just centrally focus on the house. It would have been nice to have the choice, and maybe this is something the developers plan to add at a later date.

I found that the controls probably didn’t help make the game flow as smoothly as it should have, they were a little slow to respond, and I never really got to grips with moving the cursor with the left analogue stick. My mind kept telling me to use the right one, this may not be an issue that you encounter, but it happened every time I played and it would have been nice to be able to map the controls to overcome this. The control wheel to select your tools is well designed, and easy to navigate, and the use of each item though a bit fiddly to begin with, becomes much easier with practise. The User Interface is clear and not cluttered when navigating around each plot, the big let down is the UI when you are required to purchase items from your tablet, this is quite frankly awful. The system was clearly ported from the PC version with no consideration of how it would work on a controller. Having to go through numerous sub menus to maybe find the item you wanted was frustrating, as was having to use the on screen keyboard, luckily for me, I own a chat pad, so I was able to work around this issue. Anyone who doesn’t own this accessory, and is thinking of playing this title, you will find this area an absolute nightmare to work with, my only advice is, you can shorten the words to start searching for the item you desire. 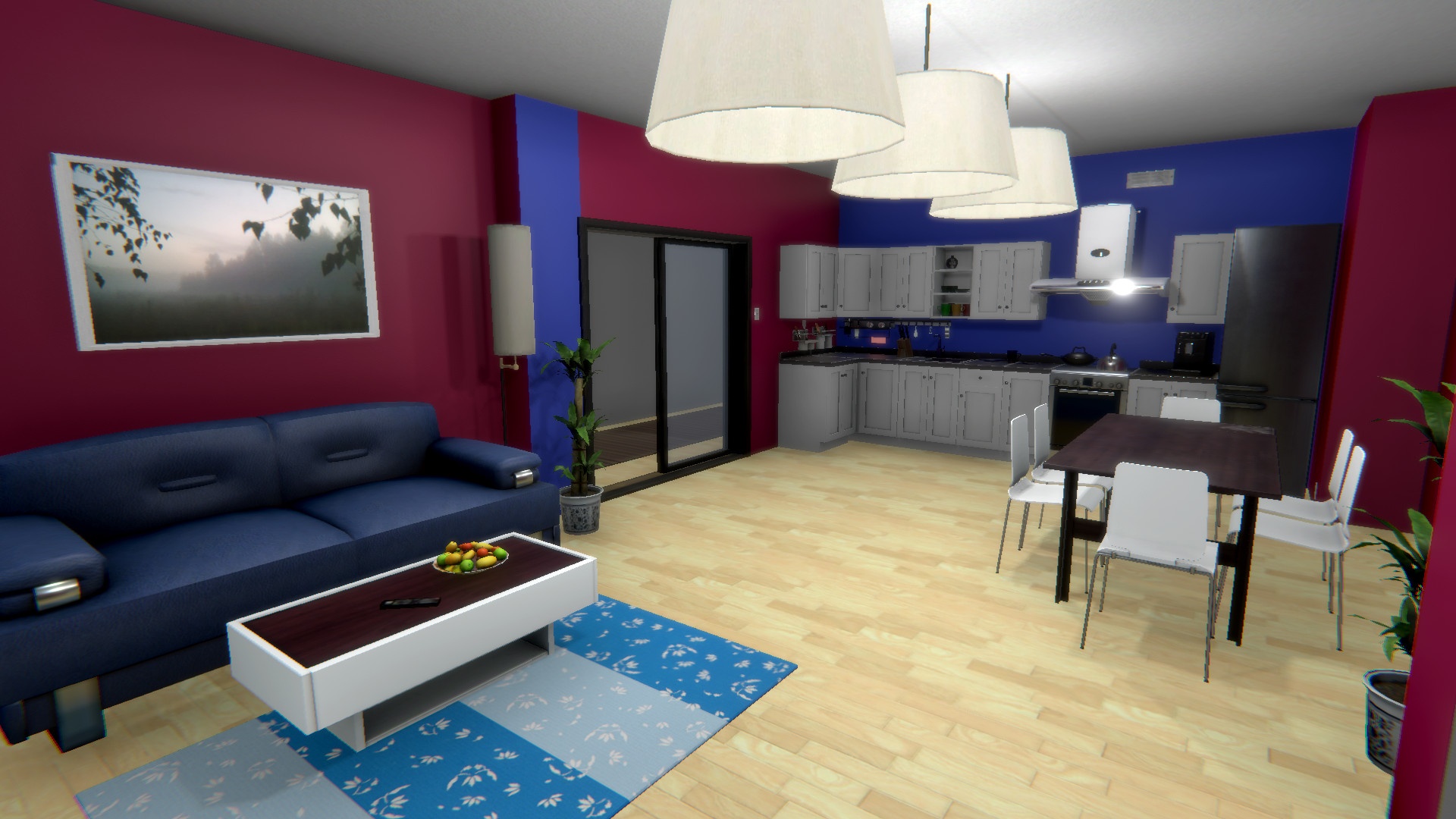 When playing a game about home improvements, what can you really expect from a developer when it comes to audio? I guess it would be fair to assume that the sound effects are realistic and match the task you are undertaking, also that the music isn’t too monotonous. Well, Empyrean kind of struck out on both counts, the audio isn’t terrible by any stretch, and does suit the genre, there was just a few glitches, and the music was well, bland and wouldn’t be out of place playing in a lift at a hotel or shopping mall. The sound effects matched the majority of items, though there were a few exceptions, such as; placing wooden floors somehow had the same audio file as placing ceramic tiles, and you would be welcomed back to your office with a rather inaudible crackling sound like someone had removed their headphone jack from its socket. You may feel that I’m being a little harsh, but with such a small amount of audio required to make this game work, it’s almost inexcusable to have so many errors.

Value for money is always something I look for when purchasing a game, and I want to know will I be returning to play once I’ve finished the title? I’d say that unless you really are a keen enthusiast for DIY or the numerous renovation programmes that are on TV, then there isn’t going to be much for you to come back to. This of course could change if they add the already released PC DLC. Once you complete the title you are rewarded by the developers with the opportunity to purchase all 20 of the same houses again, you are free to do what you wish to them, and your only task now is to increase the numbers in your bank account. Once I completed the relatively straight forward achievement list I admit my desire to return dwindled to almost non existent.

In House Flipper you have a game that is oddly addictive, and is rewarding as you build your character’s skills up enough to be able to work efficiently at any set task. Returning a disgraceful hovel back to a habitable home was enjoyable for a short period of time, and the vast selection of paints, tiles and decorative items really allows you the freedom to design any style of house to flip onto the next buyer. Once I had completed this task a number of times, I felt I had seen, and done everything that I wanted to see and do. This will encourage a hardcore group of fans who love the genre and will enjoy everything this title has to offer, unfortunately I don’t fall into that category, but I do understand why people would absolutely love to play Empyrean’s creation. For me though, this missed that ability to destroy a home and rebuild it from the foundations up, there just wasn’t enough to make me want to return to play.

You finally have that chance to be the property developer you have always dreamed of. Pick up that controller and turn that hovel into a home.

Lots of items to choose from.

Skill tree turns you into a super tradesman

Not up to date with the PC version.