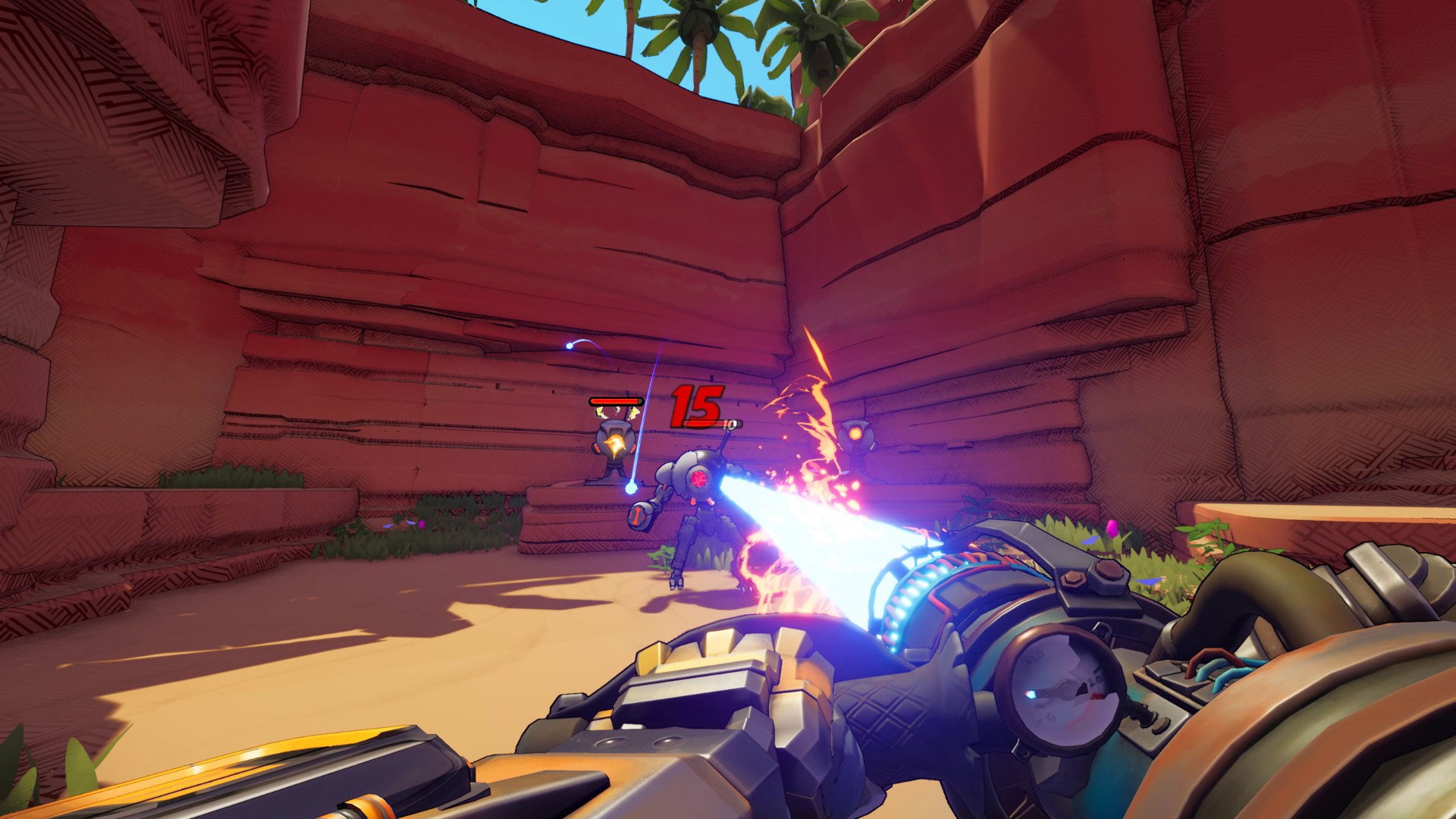 Roboquest is the latest roguelite FPS to hit Steam, and in less than 10 days it seems to have already conquered the hearts and wallets of many. In less than a minute of playing it, I already knew that I was in for a good time. Roboquest is one of those games where everything instantly clicks the moment you start moving and shooting, and once I started playing, I only stopped when I had nothing else to do.

Roboquest takes place sometime in the future, where seemingly most of Humanity has disappeared, with only droids being left in its wake. After a girl named Max finds you, an ancient Guardian robot, in the middle of the desert, she gets you back up and running in order to help her investigate whatever these evil robots are guarding in the middle of nowhere. There isn’t much else to the game in terms of the story right now, but I honestly ain’t even bothered, because the greatest thing about Roboquest is the gameplay.

Roboquest is an extremely fast-paced FPS where not only your aim is essential but also the way you move, because of the need to constantly dodge enemy projectiles and use the terrain to your advantage. The controls are very tight and responsive, allowing you to make use of the double-jump and sprint to outrun enemies, slide along railings and become exceptionally agile for an old robot. If you master aiming while moving and jumping around, enemies won’t even see you coming and they’ll be dead before they spot you.

Roboquest currently features four different zones, with each having randomly generated levels, but these aren’t strictly linear, as they tend to have a few sections where the map sort of loops around, thus allowing you to proceed in two different ways. Every now and then you’ll also run into these weird alien-like structures tucked in some corner of the map. These are essentially challenge rooms with a series of environmental hazards and traps that you must traverse in order to get to the end and get some rewards. 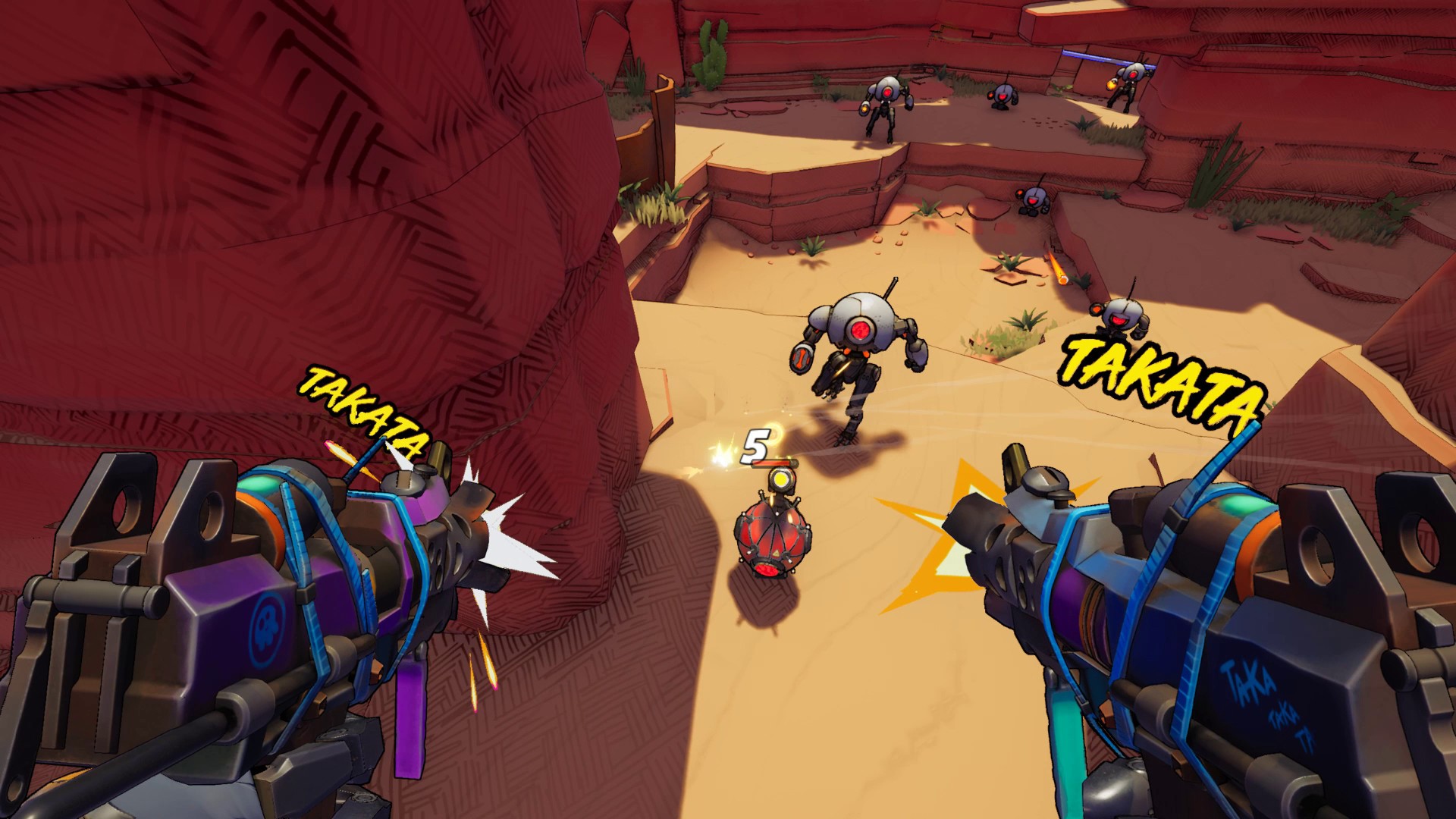 In a way, everything that I’ve mentioned so far about Roboquest might seem like it has been done before, but Roboquest has its own unique selling points, which I’m particularly fond of. The first of which is the way it handles its weapons and how you can upgrade them in each playthrough. According to the game’s Early Access page on Steam, Roboquest currently features 40 weapons, and while I can’t name all of them, during my time with the game I’ve used a scoped revolver, a double-barrel shotgun, an ice gun that freezes enemies, an SMG, a bow, dual uzis, a minigun, a blunderbuss, a grenade launcher, a series of bolt-action and semi-auto rifles, amongst a few others which I possibly just can’t remember at the moment. Now, each of these weapons has different damage types, a critical percentage, and unique modifiers that provide specific boosts like increased movement speed, and some weapons even have an alternate fire mode.

The thing that makes all these weapons so interesting to use and will have you change between them quite often is the fact that Roboquest doesn’t have a conventional stat damage system. Instead, your character has a series of stats that directly affect how much damage you deal with specific weapon types. There’s assault, precision, demolition, and technology weapons, and your character has a corresponding stat for each of these damage types. As you play the game, you’ll find power cores, which can be equipped in one out of three slots, and these simply boost those weapon stats. The damage that each weapon deals isn’t specified whenever you find or equip a new weapon, and so, the only way to increase overall weapon damage is by choosing power cores that increase the damage of the weapons that you found so far in your run. Depending on which weapons and power cores you find on each playthrough, your experience can vary greatly between different runs. On one occasion you might be using precision weapons, such as the scoped revolver, because you just found power cores that gave you a lot of precision, but the next time you play the game you might find a lot more assault power cores, which will make a burst assault rifle a much better weapon than the scoped revolver.

Just like pretty much every other game in the same genre, Roboquest also features a permanent progression system, although I find it to differ greatly from most games. As you play the game, you’ll gain these wrenches, which are pretty much just upgrade points/currency, and you can use these to upgrade your basecamp, the place where you return to between playthroughs. Currently, these basecamp upgrades comprise things such as starting each run with a random weapon or power core, but you can also craft artefacts such as a backpack, an extra life, or a jetpack, from blueprints you find while playing. With that said, the whole permanent progression system in Roboquest is done in a way that I really appreciate. While other games artificially increase the difficulty of the game by increasing enemy stats and by forcing you to grind whatever stat upgrade system that they might have, Roboquest’s upgrades focus on giving players more choice. 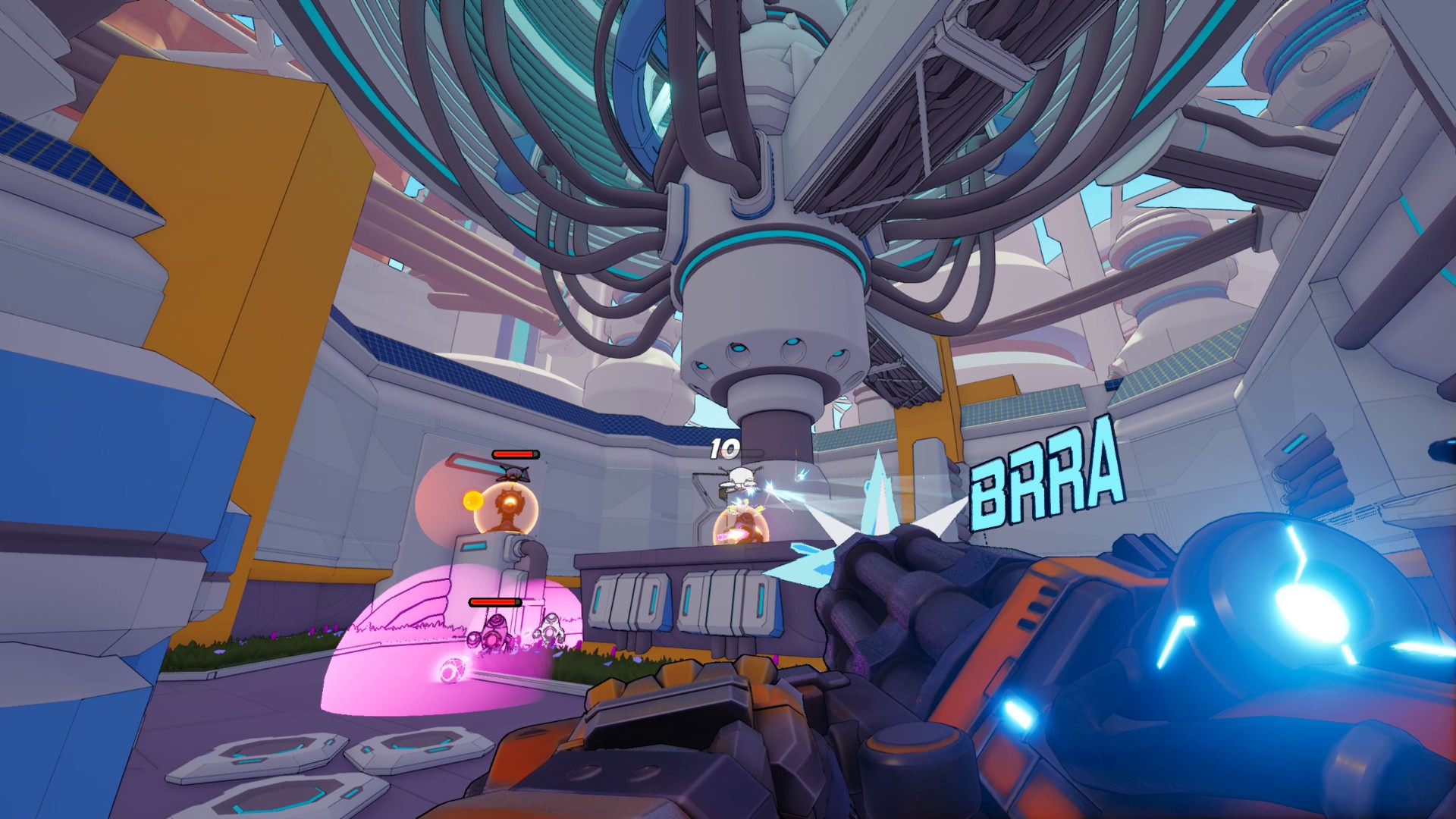 At the moment, there are also currently three different character classes that you can unlock, although how exactly you do that isn’t explained in the game. There’s the starting Guardian which can fire a homing rocket and punch enemies to pieces, there’s the Recon class which carries a dagger and automatically marks your target and nearby enemies to take critical damage from all sources, and then there’s the Engineer which lets you spawn two friendly drones and comes with a taser. Although these are different classes, to me it almost felt like each one was an upgrade over the last one, but perhaps they just favour my playstyle. Once I unlocked Recon, I never played with Guardian again, and once I unlocked Engineer, I never bothered touching Recon again either. Their abilities are what distinguish them from each other, but by combining certain perks that you can acquire when you level up during a playthrough you can come up with some really efficient and neat builds.

A full run takes about 30 minutes to complete on normal, but there’s also an easy and multiple more difficult modes that you unlock as you beat the game, so I guess that the time can vary depending on what difficulty you play. With that in mind, given that there’s only a few zones and two bosses in the game right now, I’m expecting that the average playthrough time will only increase with future updates. It’s also worth noting that Roboquest does feature multiplayer, but only through a friend invitation system, as there’s still no matchmaking in the game yet.

At the moment, unlocking everything that there’s to unlock should take you about 3 hours at most, which I guess is what will make some people hesitant to jump straight into the game in its current state. Personally, if I were to purchase Roboquest, I’d see it as an investment, as something that I’ll surely be playing more and more in the future as the game receives updates since it’s fairly limited in content right now. The developers say that they will keep adding new biomes, weapons, enemies, bosses, upgrades, and expand the story, so I’m really eager to see how the game turns out in the end. Although I absolutely adore the mechanics, the movement, the shooting, and the gameplay loop, I find myself wanting more, especially more enemy types and bosses, as well as more variety in terms of level generation. In any case, I do hope that you keep an eye out for Roboquest if you’re into FPSes and roguelites, as the game will surely only get better with time.