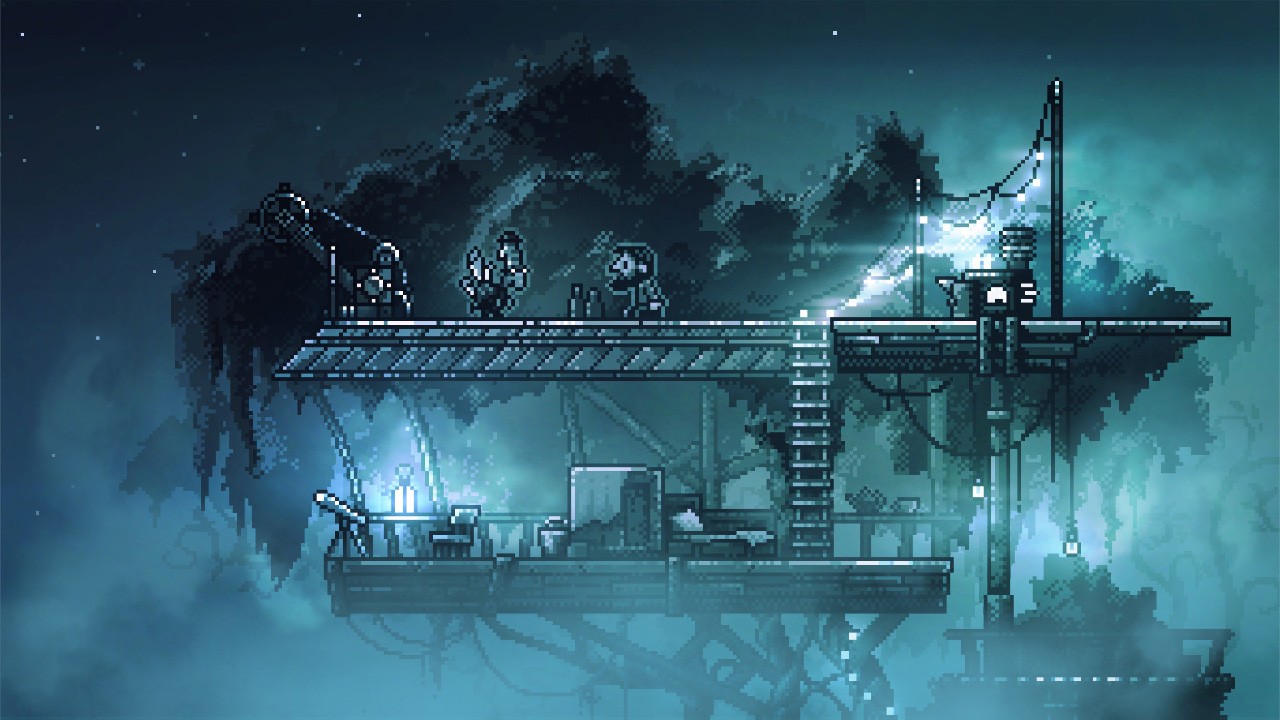 I struggled a bit with finding the proper voice for how to convey my experience with INMOST. An indie game that strives to marry exploration platforming with deep, serious storytelling, INMOST has a bit going on within, and it can be a lot for a player to experience. On the one hand, there is always, always something to be said for a game that goes out of its way to try a new approach at delivering a message or a feeling, or even just striving to connect with the world. On the other hand, when a game attempts to properly intermingle actual gameplay elements instead of just presenting as a walking simulator, there are inherent risks and rewards that come along. As a result, you end up with a game that’s a little bit Braid, a little bit Lisa the First, and a bit of something else I can’t quite place, but it’s 100% its own journey and adventure.

Hidden Layer Games created INMOST and partnered with Chucklefish (who previously brought Stardew Valley to the masses) to conjure up a very complex but compelling story within this world. It’s a fragmented exploration told through three perspectives; a fallen knight fighting darkness both outside and within; a young child living in a broken home with some serious demons; and a man who ventures through a shattered castle, trying to find answers and salvation. Most of the journey takes place from the vantage of the man, and each of the three characters has a very unique and different approach to gameplay. All three stories are interconnected (as one might gather) and presented in very different ways. The knight’s tale has a fantastic voiceover to help explain the tale as it unfolds, giving light to the fact that there is Pain within his world, and The Keeper is a shadowy entity whom the knight serves and may (or may not) be a saviour to the people. With the child, it’s almost entirely told from their own perspective, shot through with childlike ideas of grandeur (both fantastical and horrific) and, later, accompanied by the thoughts of a stuffed animal (to whom the child gives identity and life). The man’s story is one that’s told entirely by others that he encounters, be they fleeting ghosts, sinister witches, or a very strange and almost affable turkey/turtle who lives in a tree. Over time, as the stories begin to overlap and eventually culminate into a singular explanation and ending, which is, at once, stunning and heartbreaking.

Before we get too deep in the weeds of the psychological impact of INMOST, let’s dissect the actual gameplay. The child’s moments are the ones that have the most weight in terms of the overall story, and, as a result, their chapters are also the lightest in terms of gaming. You have almost no end states within the child’s chapters: you just keep exploring and interacting until the game is done. These were, technically speaking, the most boring parts of the game in raw gameplay aspect. You can pick up a few things, move them around, check out items, and eventually trigger moments to move to the next round, or to exit the chapter and enter another character’s perspective. With the child, there are no pickups to be found or tools to be rendered to help achieve the best ending (which is something of a kick in the teeth to deal with). Instead, it acts purely as a platform for you to see the helplessness of this kid inside a home that’s full of shadows, sadness and, awful as it seems, resentment from all parties. You can’t jump more than a small hop, echoing the helplessness you feel as a young person struggling to make changes or to control life. 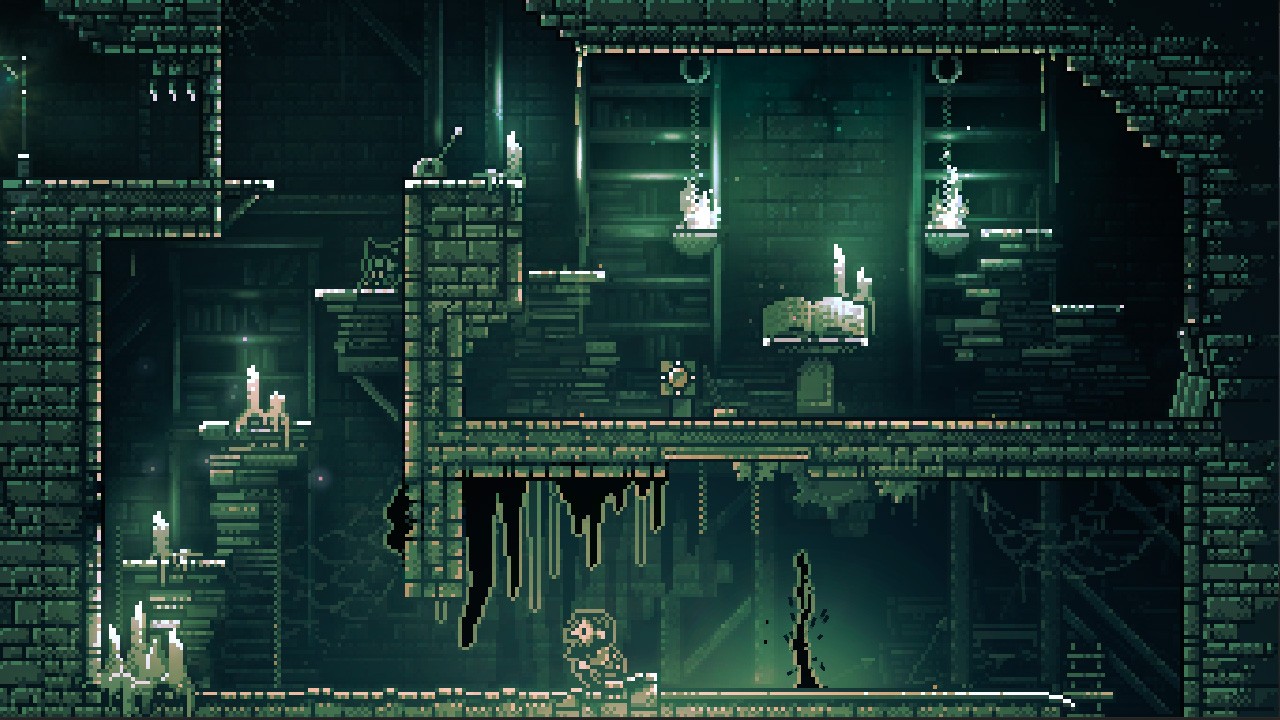 The knight has the most action oriented moments, which, of course, he’s a goddamn knight. The knight cannot jump, but has a sweet grappling hook to grab different areas and encounter shadow creatures, who seem to represent a whole bunch of horror in the world. You have no choice but to slash the hell out of them with your sword, doing both forward and upward strikes to deal death blows to that which seeks to harm you. The knight can also roll out of the way, allowing you to actually get some good combat rhythm going with certain mobs and monsters. As the knight slays, he will pick up some shimmering crystals (which are revealed to be Pain) and collect them for the Keeper, which is purely a storyline thing at this point. The knight also has the most constitution out of all the characters. The child has nearly no danger zones within their life, but you can still get a game over at a very early part of the world (and by game over I mean a quick death state followed by respawning). The man often dies from a single hit from the shadow entities, the exception being the bats (which are the biggest pain in the ass). By contrast, the knight has the luxury of dodging the enemies, shrugging off some hits and then returning fire before succumbing to damage. It’s not a bad life, except for the knight’s story is probably the most convoluted in terms of how it intertwines with the main storyline. I understand it (it’s all analogous) but it takes a moment to really let it sink in. Thankfully, the awesome narration adds quite a bit of direction and binds it together more easily. Plus, the final “boss” is an exhilarating experience in any case, so it more than makes up for some things.

The story of the man is probably the biggest balance of gameplay and story in INMOST, and my favourite part. It’s equal parts exploration and exposition, as you discover more and more tools to go back, find additional items and routes, and gather more important ideas to hold on to. The man has no real combat skills to speak of, so it’s important to dodge, jump and work out how to outwit and evade shadow creatures, occasionally tricking them into killing themselves. That was one thing that I sometimes had a hard time understanding was needing to rid an area of creatures before moving on. This is sometimes easier said than done, as you might not even realize there’s a singular demon blob hiding in the tall, pixelated grass until you’ve hit your head sufficiently against the wall enough to finally stumble upon it. INMOST is not exactly the most graceful with guiding you along: more than a couple times. The man’s journey nearly ended for me as I paced about in frustration trying to trigger the next area. At one point, I needed to jump INTO a giant skeleton to get an item that would unlock additional doors, but light, shadow and perspective didn’t make it look like that was possible: I only ever got there thanks to pure, dumb luck. 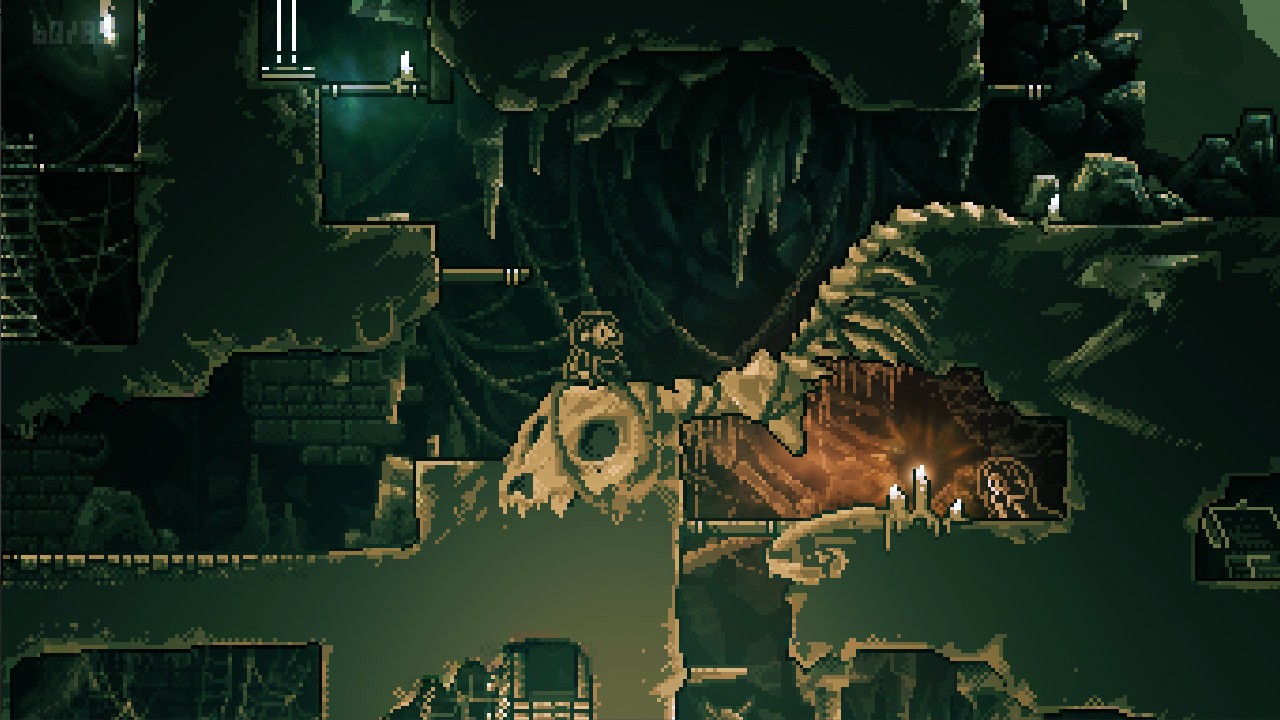 I will also say that INMOST is a bit of a technical drudge on the Switch, and I don’t know if that carries onto other consoles. In the first few chapters, everyone moved along smoothly and could transition, jumping and dashing and walking to different areas without a noticeable lag. However, about 45 minutes into the game, things got clunky. The knight wasn’t as adept at dashing, and I felt like there were some frames lost. The man genuinely seemed like he was walking through molasses, and I saw some weird glitches as new chapters loaded (jumping randomly to other parts of the game for a split second, for example). The biggest offender is when I finished two chapters, saved, and when I reloaded the game (I have a bit on my plate at the moment) all my previous progress was lost. The only one who didn’t suffer loss in future chapters was the child, and I imagine that’s because their world is limited and actions even more so.

Having said all of that, INMOST is a heavy, sorrowful tale to take in that is presented in a fantastic way. Being able to juggle and handle the story of loss, of depression, of the disconnect between a child and their family, of hate and bitterness and love and borderline madness, it’s a feat that cannot be accomplished easily. I was a little put off at realizing that I had lost control of the game for the last bit of it, but it was worthwhile to see how the absolutely punishing ending played out. Most of the time, we see games pull their punches at the very end: we get some notice of uplifting light, or a happy ending, or some variation of “everything works out in the end,” and that’s perfectly acceptable. But INMOST is saving all the strength, all the rage of the world in a final haymaker, and it lands, heavy and unforgettable, with the last blow. It’s a powerful message about pain and depression, about what the actions of the world – of others and other elements – do to affect us. A single game cannot encompass the entire spectrum of darkness that can rest in the hearts and minds of the people. But INMOST does its best to attack the demons head on, to address what can and will float beneath the surface of human suffering, what boils up and can lash out at an uncaring existence, and often uncaring acquaintances, and tries to speak its name. It is love. It is death. It is what we must all endure, but we also understand that we all endure it differently, to different degrees, and some have unimaginable tragedy that manifests in sorrow, in anger, and in indifference.

You can take away a lot from INMOST, and players may not all get the same message. I chose this line: Life does not want your pain. You can take that how you will. But it was a strong one, one that might help change a bit of my own perspective on things. The game isn’t terrifically long, and it can get a bit frustrating at times, but the payout, the revelation…it’s something spectacular. Don’t hold the Pain alone. Share it without infliction, and, maybe, you can find happiness. One does not negate the other, but we need not be solely in Pain.