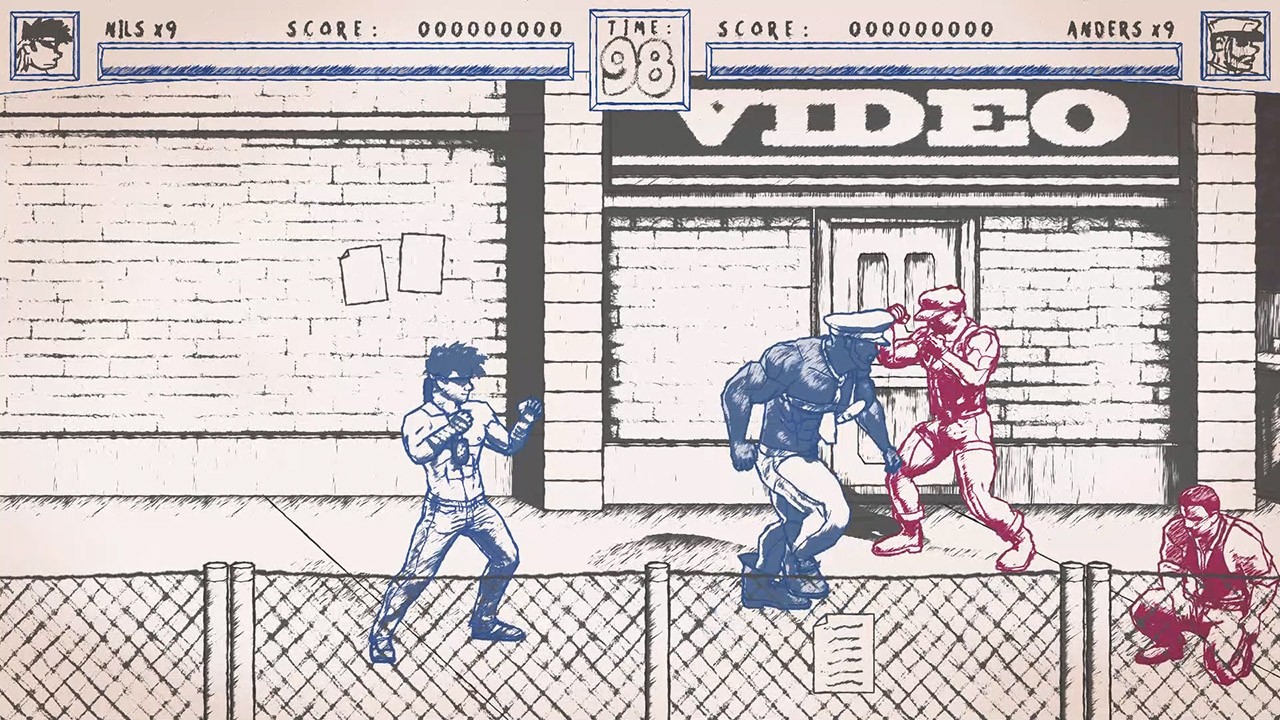 Gunman Clive was released on the 3DS and a few other platforms, but it perhaps became a little more popular with the HD collection on the Switch. An excellent title, if you haven’t already experienced it, but ignoring the gameplay, something that truly made it stand out was the visuals. Super Punch Patrol, from the same developer Höberg Productions, has the same aesthetics and quite frankly looks beautiful. The animations are great, as are the character models, and if you’re looking for something different on the surface, you can’t go wrong.

However, if you’re looking for something unique past the presentation, you’d be hard-pressed to find it as the game is a by-the-book side-scrolling beat ’em up. Perhaps that doesn’t bother you and the repetitive nature of walking through various stages beating up all that cross your path is the kind of game you’ll never grow bored with. Well, I fit into the category and can confidently say I never tire of the genre. From Final Fight up to the most recent Streets of Rage 4, they’re always a lot of fun and have plenty of reply value – whether that be on your own or in Co-op. Streets of Rage 4 is the perfect comparison here as Super Punch Patrol handles like this in almost every way – the visual filter resembles something you’d unlock as a bonus in the former.

Starting with a line up of Nils, Anders and Selma, you walk through various scenes fighting swarms of enemies with punches, kicks, throws and weapon drops. Each character has a special move that you can pull off with X, but doing so takes off your health, so not encouraged if you have little of it. You can, of course, pick up health such as cake, not chicken, and diamonds to get a hi-score, so all very familiar territory. Both Nils and Selma handle very much like Cody and Guy from Final Fight – swift all-rounders but with a similar move set. Anders, the police chief in the game, is Haggar and easily the best choice for those that don’t mind being a little slower, but able to hit harder and perform a Zangief-like spinning piledriver. 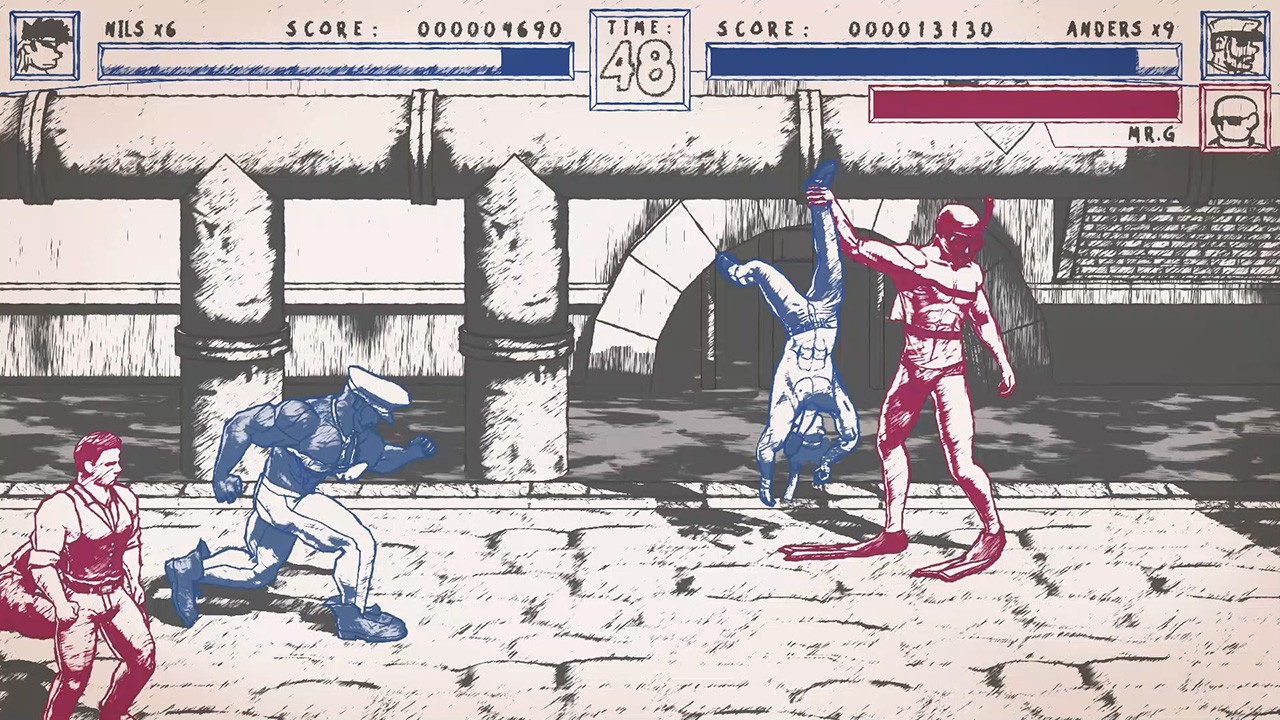 Incentives in the game would get the best scores, but also you can unlock new skins. There’s nothing too crazy here, but I noted that Nils first costume was in his pants. The character designs are quite interesting then as they look like extras from an old-school Queen video. They felt dated somewhat. That’s not a negative as such, but just a little different to the norm. The sound effects are the classic screams we’ve come to expect and feel like you’re playing an arcade game. For me, the music wasn’t so great and grated on me a little and felt like a cheap racing game, but each to their own – you could always mute it.

The controls in the game are simple as there aren’t any special moves to learn as it’s all done with the X button. One thing that differs slightly from its peers is the dodge option. Double-tap up or down, and you’ll swerve out of the way. But it’s more like a shadow step than anything that teleports you across the screen. I didn’t use this feature as it didn’t feel very natural in a scrolling game. In Tekken, yes, but not here. Again, another preference thing and it’s no detriment to the game.

What I will say is the difficulty is infuriating to the point that I genuinely was holding back from throwing my controller. I’m not one for this sort of tactic, but the AI in the game is incredibly aggressive, and yes, I understand that this is a fighting game. The AI tactics are simple: every time there’s over two enemies on screen, one of them will always get up behind you. This exposes you to an attack, or they grab you for the other to beat you, with no way of escaping (that I found). Turning to face those behind you, then turning back to prevent a counter-attack lagged and your characters will take quite a bit of damage. 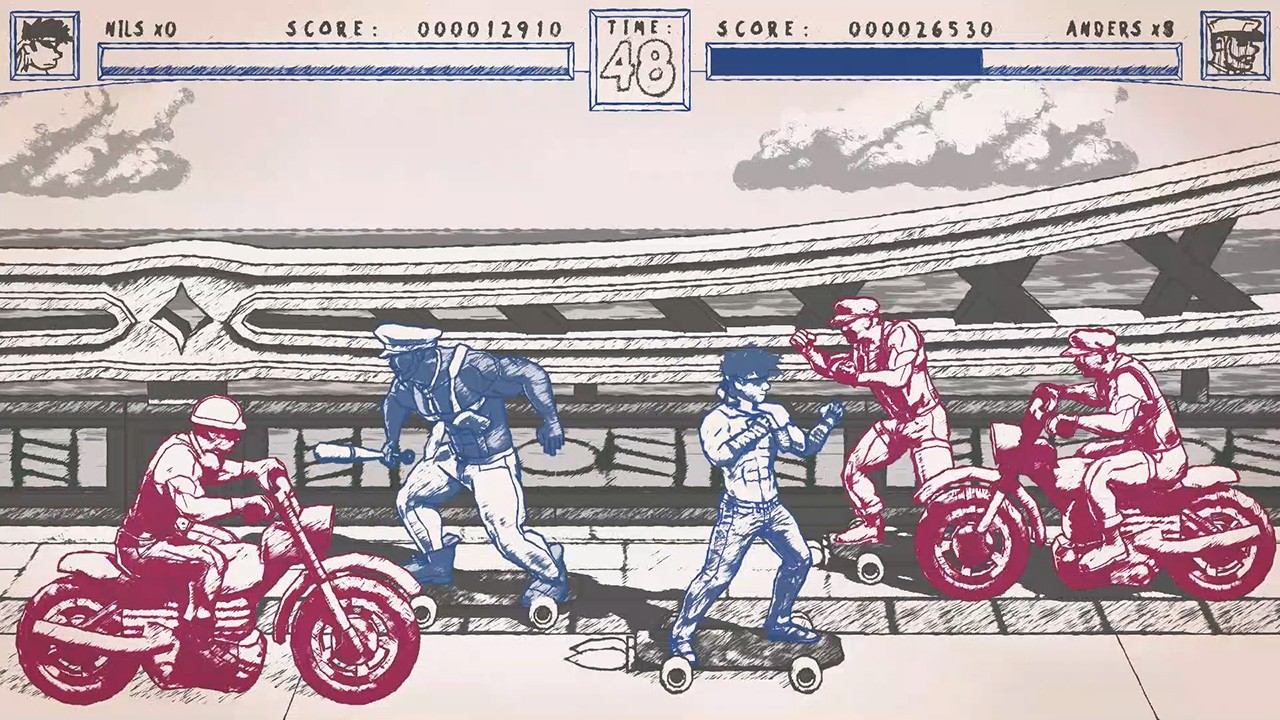 With only a five or so lives and the same amount of continues, I conceded to a lower level so I could get through the game, but all this did was increase the lives and continues, there was no change in the AI. After another stream of continues, I tried the easiest level, quite embarrassing to say ‘Practice’. Thinking this would allow me to fly through it was naïve – the same thing would happen: attacked from behind, or you’d be in the middle of an attack and you’d either be hit from above or with a projectile. It almost felt like it was inevitable you’d die, and the supposedly easier modes only gave you just a bit more time to die and get through.

Boss battles aren’t so bad. Once you learn the patterns, they aren’t so tricky, but lesser enemies keep spawning and the old ‘back attack’ crops up. One boss, in particular, was rage-inducing as one of his moves froze you to the spot, and you’re then on the receiving end of unblockable, unavoidable attacks. On this basis, Super Punch Control was not enjoyable in the slightest. I didn’t mind taking a hit in my confidence for playing a lower level just to get used to it, but it made hardly any change at all. The only way I could enjoy this game was in Co-op and watch each other’s backs.

Beat ’em ups are one of my favourite genres, and while I don’t claim to be of a competitive standard, I can usually hold my own. With a bit of time and practice, some of the more demanding games can be finished by learning the ropes in easy and working your way up. That’s how I finished games like Double Dragon back in the day, but despite the confusing name, the practice level was far from it, and you still get to experience the same hard-hitting enemies. I’d choose Streets of Rage 4 or Ninja Saviors over this.

Let’s just be clear, this review is based on opinion, so it’s worth trying out the game yourself as the consensus is this is a great game. Yes, it is in many ways, but the difficulty was so frustrating that it feels that the game is targeted more at a hardcore audience. The score is a reflection of my personal experience with the game, and while it doesn’t score highly, I’ll contradict things a bit and say that at £4.99 on the UK eShop it’s a steal. Also, it’s a solo developer, so if beat ’em ups are your thing and you aren’t daunted by challenging gameplay, which sometimes feels unfair; it’s good to support their endeavours. From my perspective, however, it was just too irritating with the AI, and it lacked some features of similar titles.

There’s no doubt that Super Punch Patrol looks the part, plays well in terms of controls, but the AI is unforgiving for casual gamers or those who don’t have the patience for being juggled in a game without any chance to hit back. Well worth the price if you’re a connoisseur of fighting games, but be prepared for some frustrating moments.