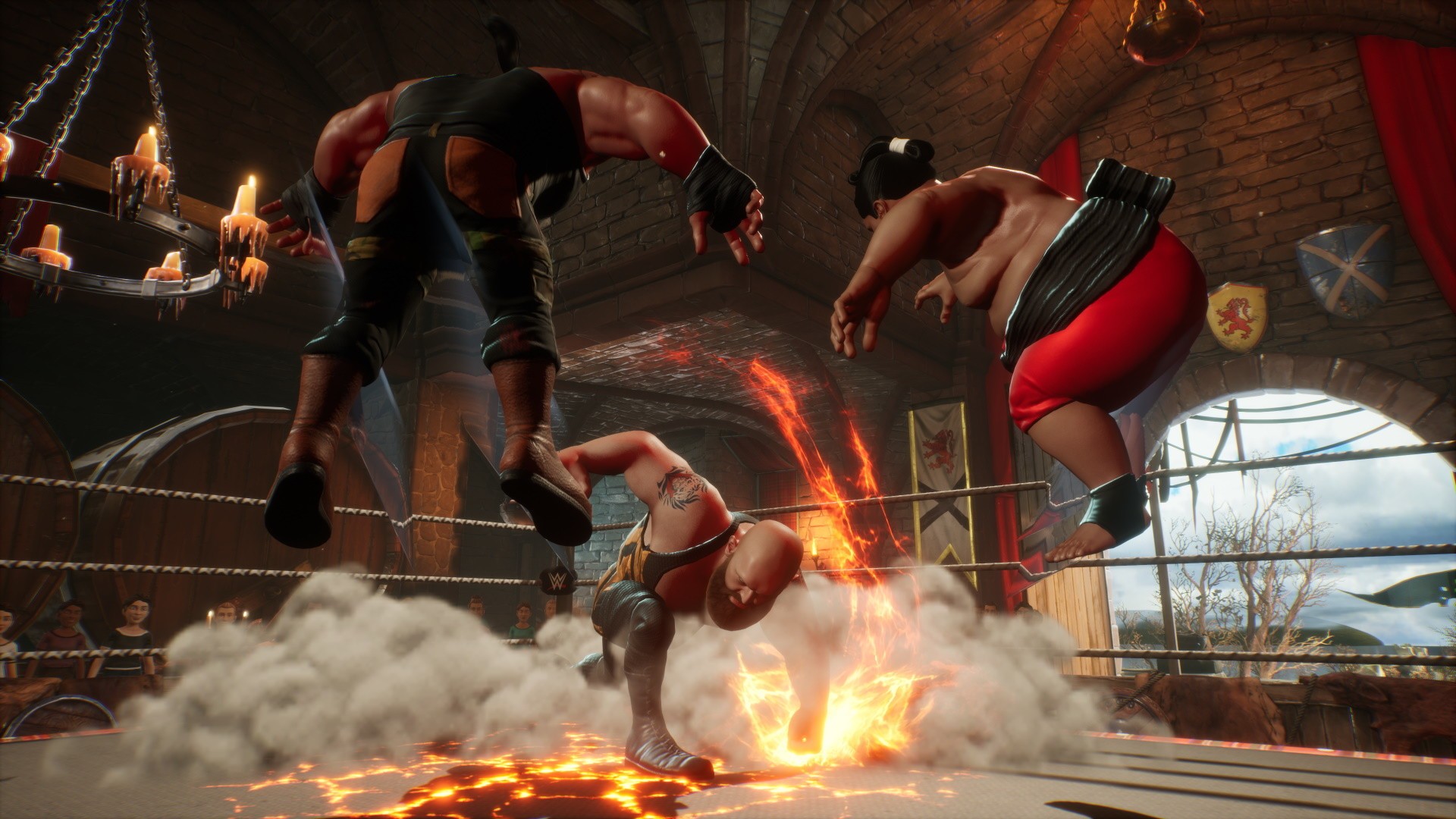 I haven’t played a wrestling game since I was a young teenager. Even at that point I didn’t pick up the game because I was a massive fan of the sport, no, it was because it was fun to play with my friends. A mindless distraction where we could beat each other up, while pretending to be some famous guy thrusting around in tight underpants. The N64 was where my last wrestling action happened. That was until this week. WWE 2K Battlegrounds has been unleashed on the gaming community, and it’s now my task to have a look at it, and see if it’s worth investing not only your money, but your time.

Developed by Saber Interactive and published by 2K Games this latest addition to the wrestling world doesn’t take itself too seriously. Its cartoon appearance, unworldly moves, and ridiculous nature will appeal to a younger audience. It’s been well documented that WWE 2K 2020 was poorly executed and badly received. A buggy mess that left its many fans raging at how they had been treated. Now I’m not for one minute suggesting that this arcade version fills that gap, but the developers can’t afford to make the same mistake with this latest albeit lighthearted wrestling encounter.

As you first load into the game, you instantly see bright colours and cartoon graphics. The almost caricature-like imagery allows you to identify the many famous superstars, though their features are grotesquely exaggerated. They all appear to have been permanently working out during Lockdown. Once you pass the start screen, you are welcomed with what looks at first impressions to be a lot of choices. Scan through challenges, create characters, look at the superstars, or latest news, and finally get into the wrestling action. I skipped it all and decided; I wanted a fight.

As you proceed, you are given several choices; Career mode, King of the Battleground, Tournament, and Exhibitions. Some are online-only, and some local or solo play. I mostly built up my reputation in my career mode as I struggled to find many online matches. It was a shame I couldn’t access more, as the Royal Rumble inspired King of the Battleground was by far the best mode. Jump in whenever you wish and battle players from around the world. The longer you stay in, the bigger the reward. “What reward?” I hear you ask, an in-game currency (more on this later). Along a similar vein was the Tournament mode, though several were hidden behind unlockable restrictions, or required a payment to unlock them. If you try your hand at this mode, you are told the format for each competition, and the winner is handsomely rewarded for their efforts. 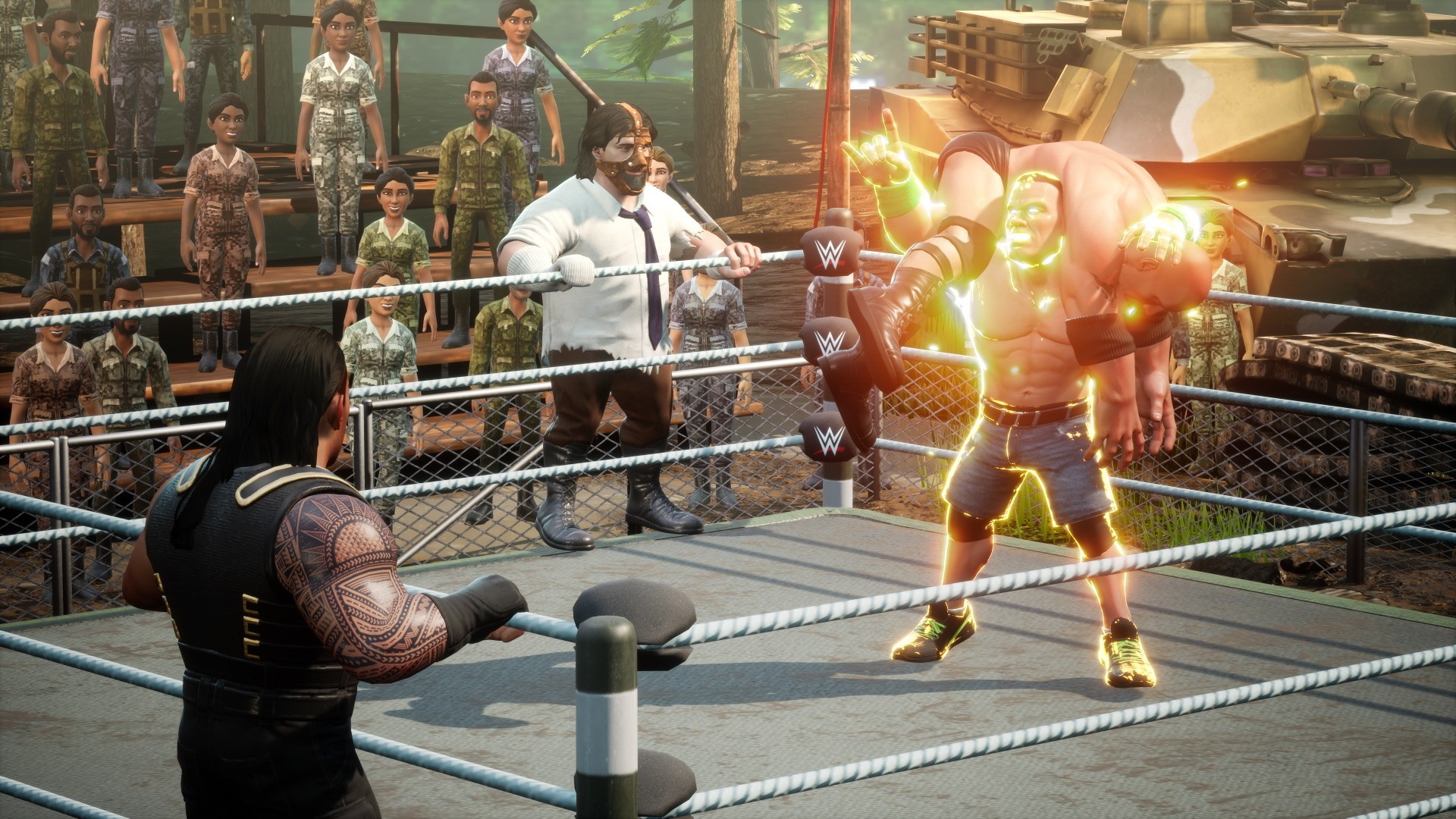 I’m sure you are thinking, “This seems alright, superstars to choose from, online and offline play, and a career mode. What’s not to like?” Unfortunately, a fair bit! Remember me mentioning that you could create your own character? You can’t use them for the career mode, or the tournaments. Instead you are given 6 preset nobodies who want to make it big in the wrestling scene. This lack of freedom affected my emotional connection with the career mode, and though I enjoyed proceeding from one stage to another, it felt like it had missed an opportunity. As the story unfolds, you are told the plot through several comic book style cut scenes. Unfortunately, the writing and content are pretty poor, and it was just as easy to skip this and move onto your next challenge. This lack of depth made the career merge into one constant battle, with fight after fight of soulless encounters.

Every time you complete a battle and are victorious (which quite frankly happens every fight because of how little challenge you’ll face,) you will be rewarded with some in-game currency. This is used to purchase characters, custom items, and power-ups. You will also use it to unlock tournaments. This purchase model really got under my skin. Quite literally everything could be purchased with real-world money, and those players who didn’t want to work to overcome the paywall, could achieve their goal by throwing cold hard cash at it instead. It took away the sense of reward, and anytime I faced someone online, the thoughts in the back of my head were; are you good or have you just paid for that?

Now all these things can be dealt with, and skimmed over if you are having fun, and I did genuinely have moments I enjoyed. But what I can’t forgive is the key game mechanics that make this title tick. That is, smash one or 2 buttons repeatedly; kick, punch, kick, punch, kick, punch, and so on and so forth. Zero skill is required to win this, so much so, I could give the controller to my 2-year-old, and she would win with ease. Your wrestler has up to 3 power-ups that can be upgraded with the in-game currency. This overpowered move will floor your opponents and leaving you on the verge of victory.

For all its negatives, and my harsh words, it looks like I didn’t enjoy my time playing it, which isn’t entirely correct. It was mindless button bashing madness, brash, in your face, and over the top. It didn’t take itself too seriously and fell into the arcade sports genre perfectly. 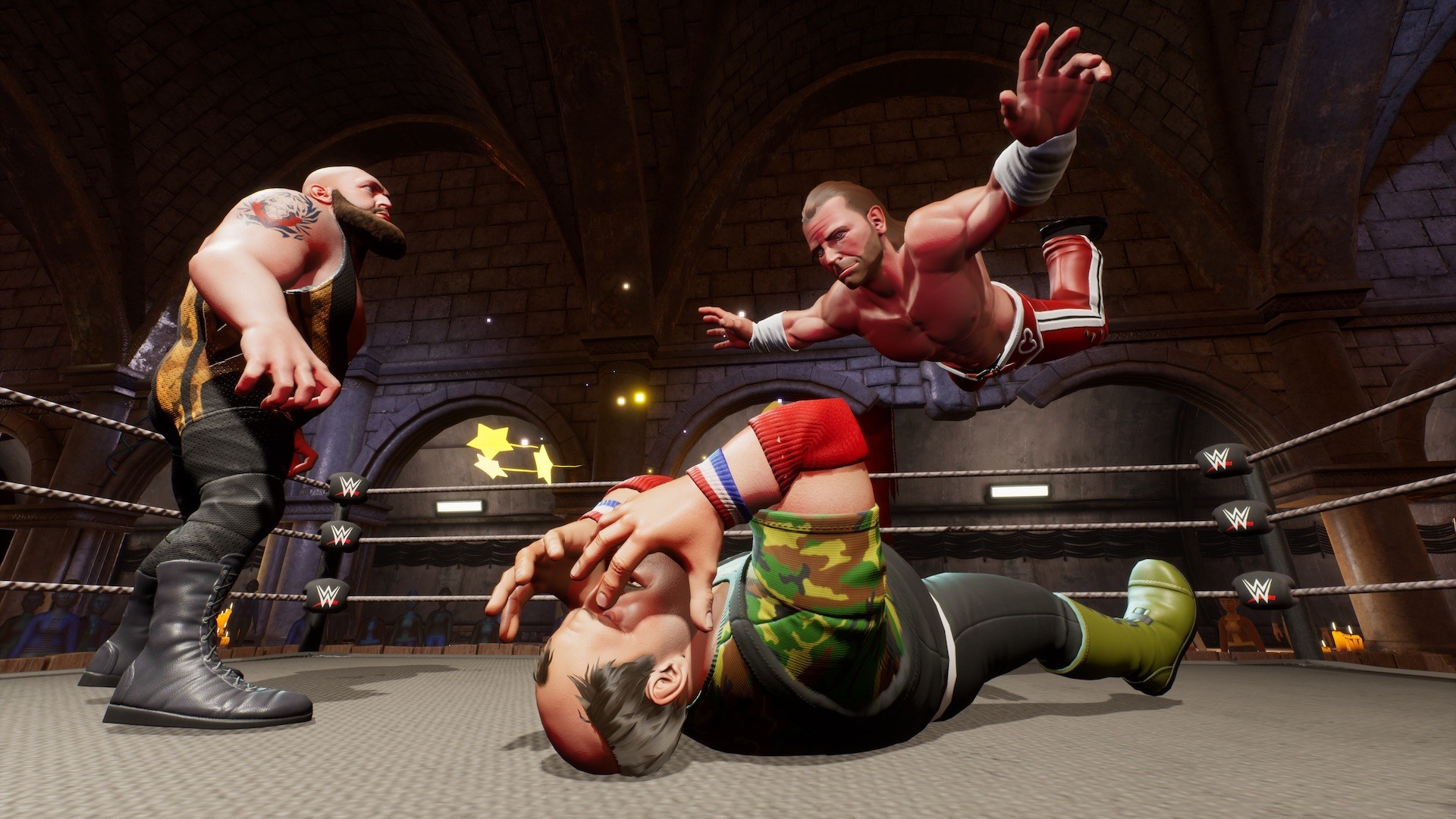 Unlike the other games in the 2K wrestling series, this one steers clear of any element of realism. The cartoon style may not be to everyone’s liking, but I liked the over the top nature, and the vivid tones and colours that were used. The character models were well designed, and nearly every superstar was instantly recognisable. Though the action was quite hectic, I noticed no major issues with how the game played out. The arcade nature is emphasised with the random ring locations, and the ability to use items and creatures to your advantage.

The audio is exactly as you’d expect from a wrestling game, upbeat and high-tempo music plays out, keeping the adrenaline pumping. The thumping and crunching sounds of punches and kicks make you wince, and the screaming of the crowd and over the top commentary is deafening. The audio adds to the spectacle and works as expected for a game of this nature.

For a title that is mainly button mashing, there are a few different buttons that you have to master to succeed. Like with all wrestling games, you must contemplate attack and defence from all areas of the ring, so a responsive and easy to learn system is a must-have. If you forget what you need to do, have no fear. For some unknown reason, the developers added a random tutorial every time you load in to play. You need not worry, there is absolutely no chance you’ll forget what you are doing.

I’ve highlighted several modes and online and offline challenges. You can play this solo, with friends in the same house, or from across the globe. With this in mind, you’d think there would be a lot to come back to. Tournaments are added regularly, and King of the Battleground is hilarious. However, the repetitive nature of the main game mechanic really weighs heavily on the enjoyment factor of this. I struggled to feel inspired to keep playing after a few matches. If you have a good group of friends, I can see this being a good laugh on a Saturday night, but other than that it may be one you return to infrequently.

The 2K series of games took a bit of a pasting when it released its last title, and for hardcore fans of the franchise and the genre, it just wasn’t acceptable, or fair. Do I think this one acts as a stopgap to make up for that abomination of a game? Not really, this is a different beast, and should be treated as such. It’s fun in short bursts, and even better with friends, but can get monotonous very quickly. Do I recommend it? Yes, but go into it with your eyes very much open. This isn’t a wrestling title that plays up to the realism stakes and is aimed at a younger, more casual gamer. Can you make it in the world of WWE? Battle your way past wannabes, and local heroes to become the next big thing.

An arcade cartoon wrestling game that doesn’t take itself too seriously. Take on a bunch of unknowns, and try to become the next big thing.