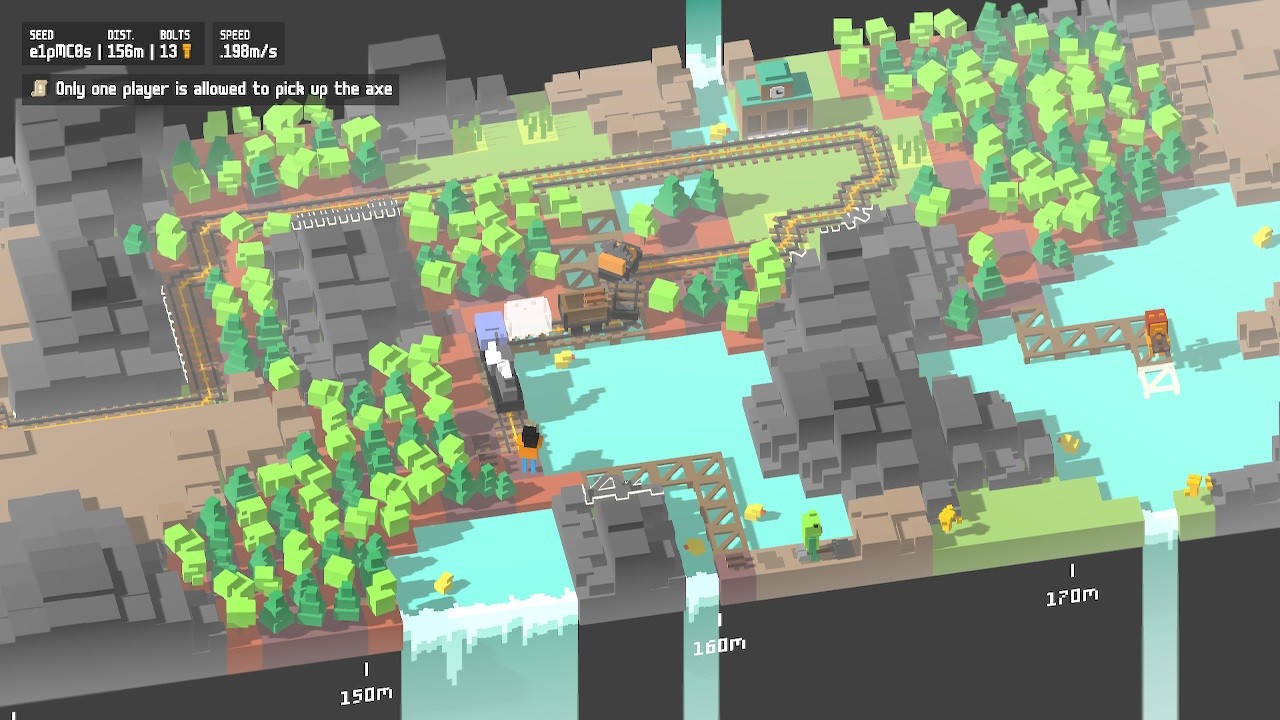 In a world of big budget games known as AAA, the winner is the one who sells their product in the most creative way. When it comes to indie titles, this industry risks much more than hyper-famous productions that always generate high expectations from the public. These productions are often betting on the name of the franchise to which it belongs and its past successes. Unrailed! breaks the rules and brings us a simple game, whose proposal is purely fun, but with some useful features to create longevity and some great interaction between players.

Unrailed! is a game where your sole and main objective is to guide a locomotive that has just left the initial station. Destined for another train station, your task is to build tracks so that the locomotive will not derail nor be destroyed. However, in order to achieve the railroad path, it’s necessary to cut down trees and pick ores, in a procedurally generated scenario, using an axe and a pickaxe – respectively. 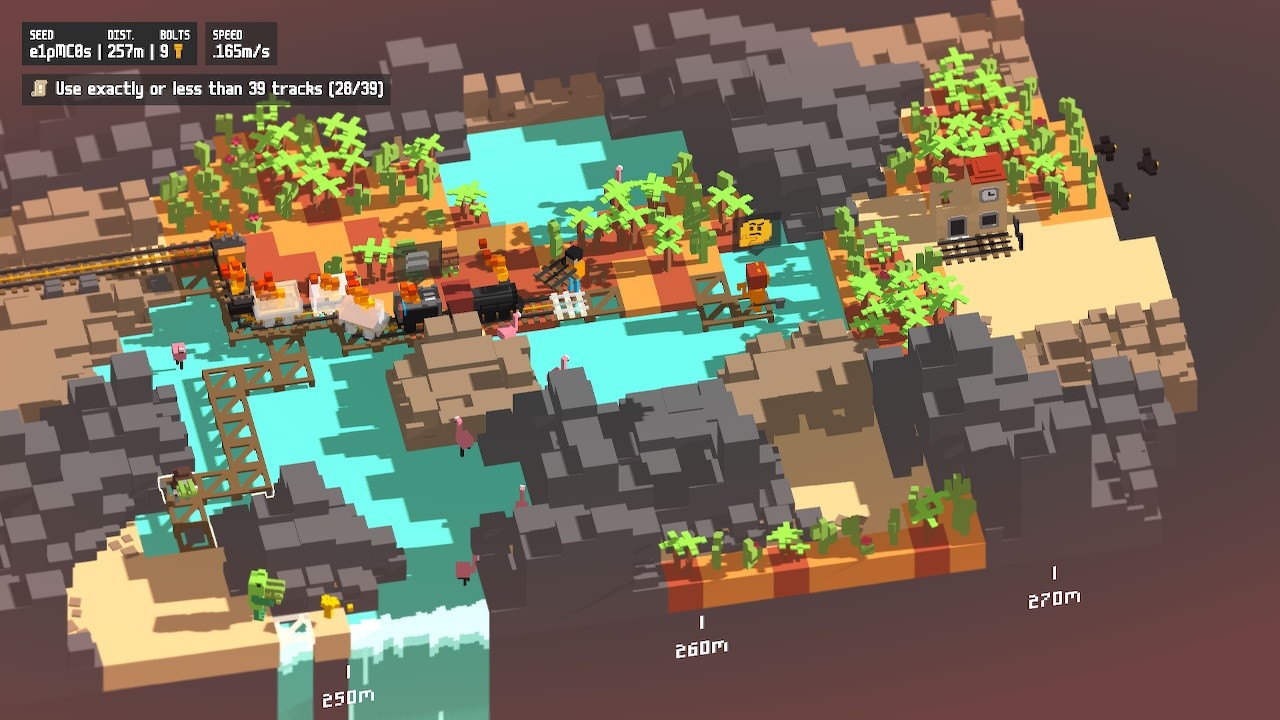 That said, put necessary materials in one of the wagons to craft the tracks and create your railroad. But it is necessary to be quick, since the train is coming and has no stop, besides that, your built tracks on the wagons can catch fire at any moment, since the locomotive can overheat. However, relax, a friendly and intelligent bot will be there to help you with whatever you need through simple commands. You can send the little robot to collect wood or ore, put the fire out of the train, or even build the tracks for you. Other than that, there is also a waypoint creation command, through which we can create paths where the bot should go when building the railroad or collect the materials for that. Fortunately, if you have friends or family, you can play along with up to 3 more people on the same console, using everyone’s help.

This is the whole story you need to know in Unrailed!, and this is all explained in a brief tutorial before the game really starts. After the initial teachings, we are sent to the menu where there are options for quick game, sandbox, endless game and versus. The quick game has some short stages to practice and improve your management and track building skills, with different levels of difficulty. The sandbox is a free mode with different scenarios (yet procedurally generated), where there is a way to configure which types of wagons will compose your locomotive, in addition to being possible to do an upgrade overcoming challenges established by the game so that the amount of wagons allowed is magnified. Other than that, this mode allows you to choose the distance from the start to the destination station (the end of the stage), so that the match is more lasting. The versus contains the same elements as the standard game, but the difference is that here each player has his own locomotive and station, and there is a cannon attached to one of the cars. This weapon serves as an attack, which can be used to delay the opponent’s locomotive. 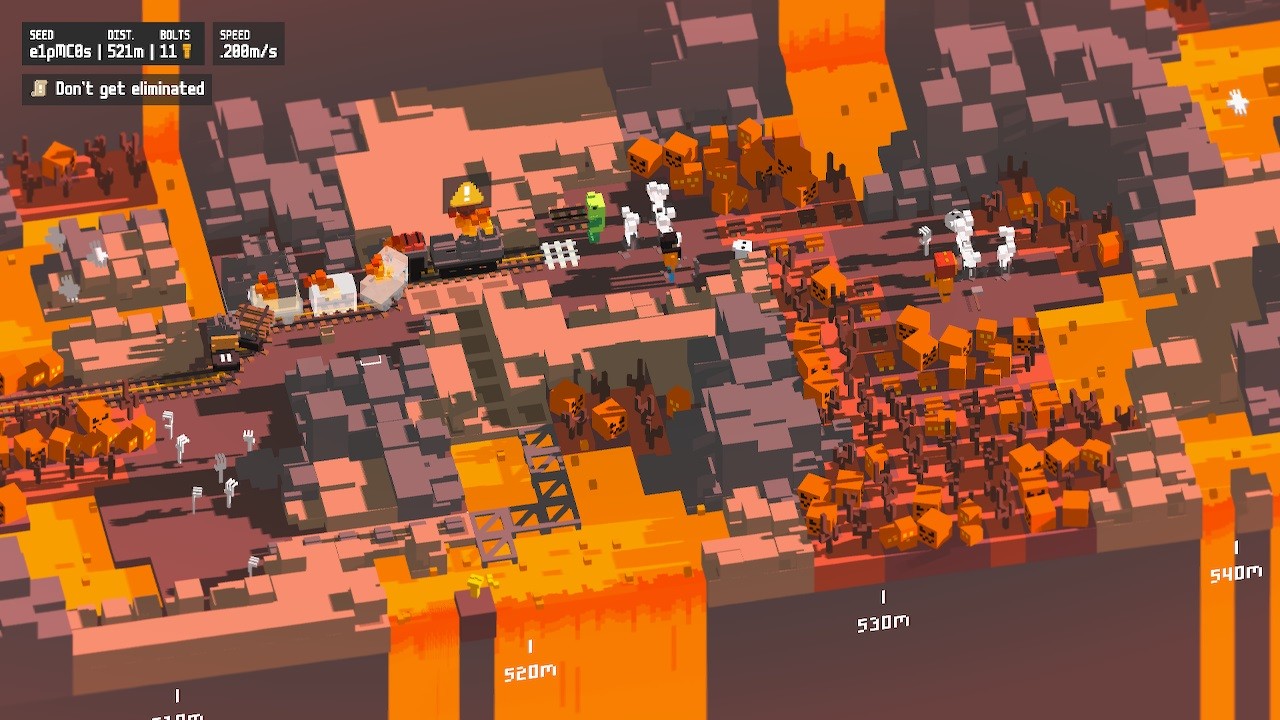 Any of these modes are used to unlock skins for your character that, unfortunately, has no impact on gameplay. Additionally, it is possible to play online with people around the world in any of the available modes – cooperatively or not. There is room creation, and lobbies, in addition to the possibility of selecting the region in which you want to make this connection. The multiplayer mode works surprisingly well, even with very high pings – around 200ms -, and I had no problems when having fun with random people over the internet. There is also a communication command during the game, making use of emoji’s that represent some actions and needs that reflect the main mechanics of the game. By the way, if you want to tag with someone else on the same console and also want to play online: yes, you can do that simultaneously!

Despite being a lot of fun, Unrailed! it is not able to offer such a deep content or a minimal story, and the game ends up being based only on objectives represented as internal achievements, where its fulfilment unlocks new characters, different skins and wagons. Even so, the proposal to bring something incredibly simple and with sure fun that is successfully accomplished.

Even not being able to offer a deep story, Unrailed’s! proposal to bring something incredibly simple and with sure fun is successfully accomplished.