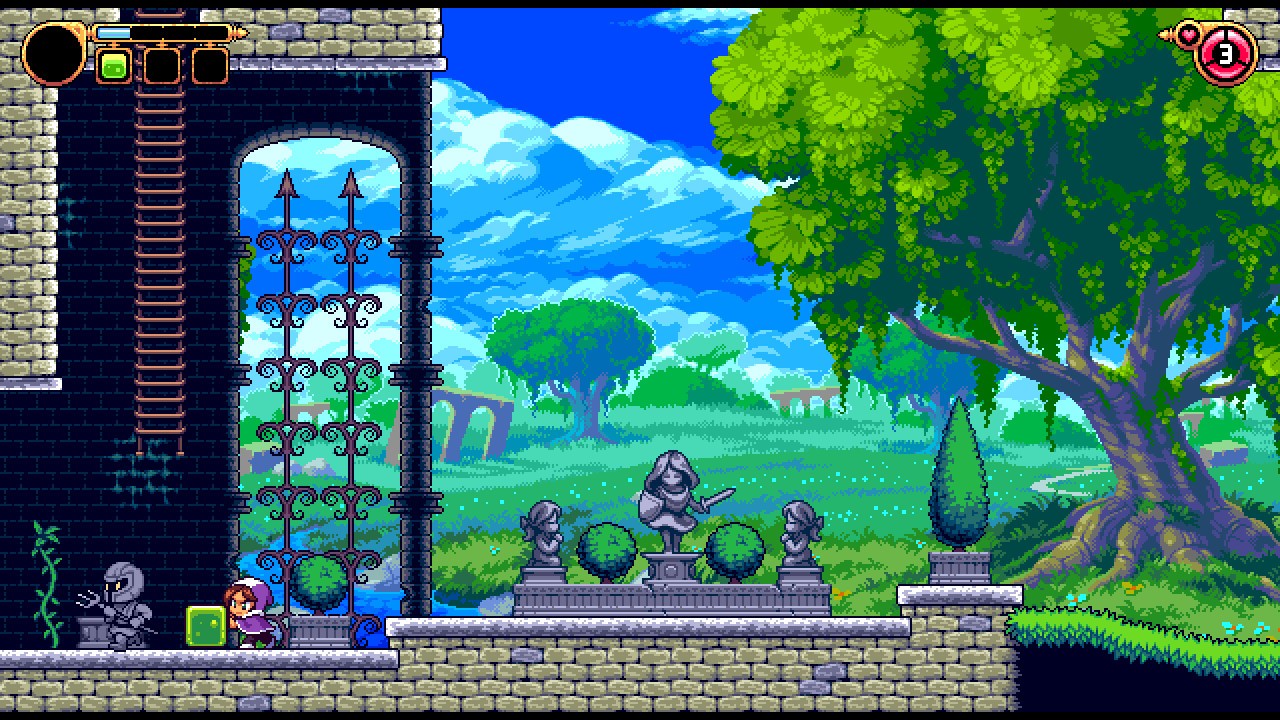 I like Elden Pixels, I really do. When they released Alwa’s Awakening some time ago, I was instantly smitten with the game. The construct and handling was a love letter to the NES generation with plenty of original gameplay, storytelling and concepts throughout. The next move from this development house, though, is peculiar, something that might raise a few eyebrows. It’s not reinventing the wheel, but rather creating a new take on the wheel. With Alwa’s Legacy, we’re seeing a continuation of the ideas that Zoe and her misadventures brought forward in the initial game. Thankfully, due to the construct of the idea, it’s not clear if this is meant to be a reboot, a reimagining, a spiritual sequel or a sort of Ender’s Shadow style parallel story. But one thing is clear: Elden Pixels make a particular type of game, and it’s a damn good one.

Theoretically, at the core, Alwa’s Legacy and Awakening has the same basic plot. There’s Zoe, an amnesiac character who wakes up on the shore of a lake to be tasked with a chore of saving the world. Instead of being greeted by the old woman Saga, however, you’re rudely engaged by some kid they sent as an errand boy. Saga is in the library where you’re eventually headed, and you even make your first moves in the game as her. Which was a strange surprise. That isn’t the end of the good twists and turns either. Instead of finding your magical staff, you actually start with it, and are promptly disarmed by the Vicar (who makes some reference to the idea that you’ve fought before) and are forced to go find your stave in order to get anywhere. When you finally get to Saga, she bequeaths upon you a magical book that will make note of all the demons you slay, and then casually mentions you need to find three magic gemstones in order to restore your memory and return home. While this was basically what you get told in the first 3 minutes of the original Alwa’s Awakening, here it takes close to twenty minutes of exploration, trial and error and even defeating a mini boss before you can get this level of detail. 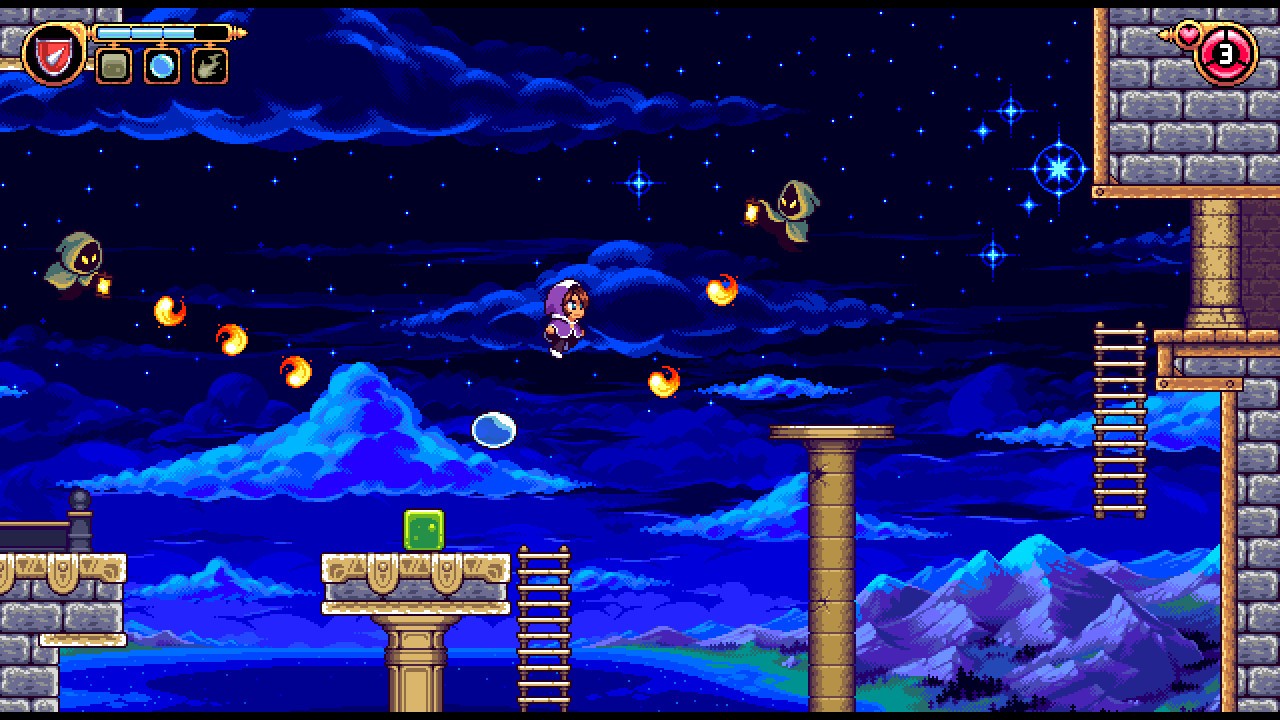 From the drop, Alwa’s Legacy is a massive improvement over the original game. The new pixel art style moves firmly away from the 8-Bit roots of the first game and into a new, delightfully colourful 16 Bit motif that not only flushes out the character design but also adds to the animation and movements of it all. Zoe has a more significant presence as she jumps, ducks, climbs and swings her way across some shockingly large areas. It’s so incredible to see Elden Pixels double down on their original idea and just make it “more” in every way that doesn’t sacrifice the core belief structure. Instead, you get Zoe deep underground, travelling through lush forests, diving beneath the waves at the strangest times and plumbing the inner sanctum of some deviously difficult castles. It’s a sight to behold, and it reminds me of why everyone moved on from the NES to the SNES: even though the original system made some great memories, it was time to move into something more grandiose, which is what the Legacy chapter provides for players.

The key play style of Alwa’s Legacy is metrovania, though perhaps it’s a puzzle platformer. The balance is incredibly tenuous, and players may find their trains of thought swinging wildly from one side to the other. On the one hand, you see, even from the very first few rooms, that you’ll be coming back around once there are better tools in your hands. There are ladders that lead to watery lands where you’ll drown within seconds and dark caverns that are far too dangerous to explore without a light. Even parts of the town are unreachable at first, so you need to make notes about where you’ll want to revisit in the not too distant future. These concepts are also aided by the “quests” that the NPC denizens set out for you, something I always enjoy. I already know I’m going to be skulking around, trying and retrying to get into a certain place. Why not unlock some goodies in the process? They might be seriously story related, or they might just be nice to see and have, who knows? I was told to quest, and quest I shall.

On the other hand, the puzzling is what makes the game both mystifying and sometimes frustrating. For example, one very early puzzle has you trying to drop a block on a panel in order to activate a door to get to a ladder, but the pathway is too narrow for you to push the block. You need to awaken the statue enemy, get them to want to attack you, and then tricking them into stabbing the block instead of your fleshy body, which causes it to slide across the ground and turn on the panel. That might seem minor, but this was after getting stabbed in the ass several times and getting a couple deaths to figure this out. The name of the game with Alwa’s Legacy is expect the unexpected: when you think there’s no way to do something, the game provides the Rube Goldberg experience in the best and strangest ways possible. It’s not quite any bizarre, 4th wall breaking levels of nonsense, but it can still be tricky. 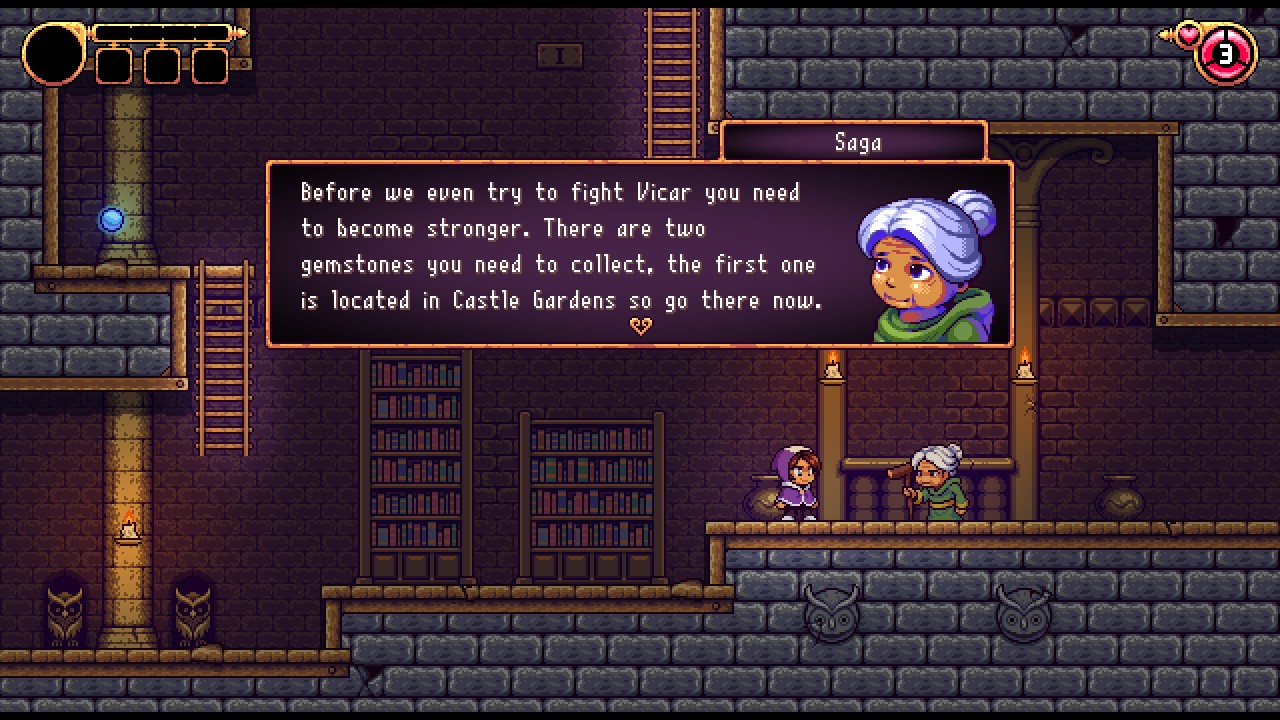 Zoe’s main bag is to get her hands on as many spells as she can and then making herself into the battlemage extraordinaire, which I fully and wholly support. It’s perfect for the metrovania element as well as the puzzles, and the spells do build quite naturally without ever becoming obsolete. You learn, very early on, how to summon the single green block that almost feels like a trademark for the land of Alwa at this point, and you never stop using it. Sure, you can eventually do some insane lightning dashes and can teleport through walls like Nightcrawler, but at the end of the day you need that block. Just like you’ll need the bubbles you can summon. It’s the perfect way to make a game feel complete. There isn’t any “Oh, I can summon a meteor now, this fireball is useless” moment to the game. It’s utilitarian in the finest way, making sure that every part of the buffalo gets used throughout. Sometimes certain abilities are used more than others, but they never, ever stop being a good part of your toolbelt.

Elden Pixels have created something truly special here. We have a game that has roots and ideas in the past, but there’s so much personality and thoughtfulness in the way the story and the characters are crafted that it couldn’t be from anytime but now. Zoe isn’t a one dimensional being who serves as the capital-H hero, but instead learns and grows, develops and becomes wiser as her journey takes her further and further from her humble beginnings. There are no moments where you feel like you’re taking a step backwards, only forwards, and it leads you to a more complex and satisfying experience throughout. From the very first moment where you have to conquer a lightning hurling demon boss by dropping a block on his head and then getting a Lord of the Flies achievement, it’s clear that the approach to everything is deliberate without making you feel like you’re being corralled towards a singular choice. It’s the illusion of open ended gameplay while still having a set goal in mind that makes the player excited to find out more. They don’t get spoon-fed how to progress, but figure it out and have their discoveries validated and vindicated. I know this because I spent the weekend beating the game, and now I’m going back to try to find new ways to approach it, because I firmly believe that, if you CAN progress with only a certain number of tools, you’ll be able to, and Alwa’s Legacy is all about letting your test your limits without informing you ahead of time what you can and cannot do.

I sincerely applaud Alwa’s Legacy as a fantastic creation that shows that some ideas don’t have a single use, but also need not be carbon copies onto different paper. You can get more out of something by trying it in a different way or from a different direction, and Elden Pixels have done that with more grace and style than most of the bigger companies that just keep rebranding the same tired schick as this year’s instalment of some franchise. Players who want and need a challenge that feels organic and interesting need look no further. And one last note: there is a special pacifist mode that you can discover if you’re dedicated enough, and it’s a delightful engagement if you’re into that approach.

If this has been on my SNES when I was in school, I would have failed seventh grade spectacularly, and I would not have cared in the slightest.