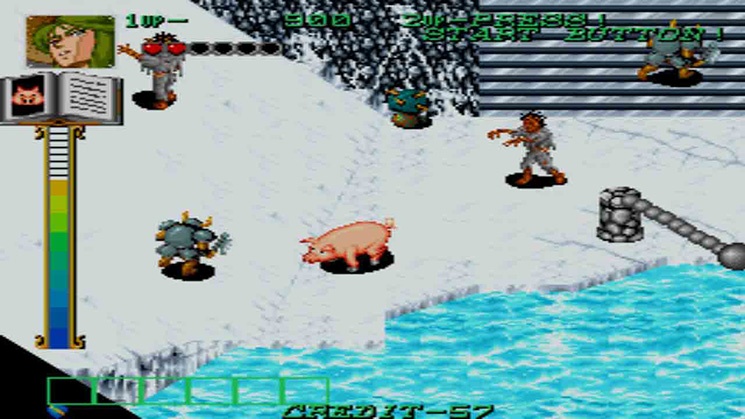 I have had my issues with Hamster’s releases of the classic NEO GEO titles onto the Nintendo Switch, that’s far from a secret to anyone who’s read past reviews. When games are already fantastic in their own right, the ports shine even more brightly. When there’s little to nothing that keeps a title interesting other than “I vaguely remember this one,” then it becomes a waste of time and space for everyone involved. But that’s the great part: nostalgia is a huge selling factor, and SNK realized this early on with the Switch’s release. I don’t know what the sales figures might be, but I imagine it’s enough that we’ve had a fairly steady stream of these classic titles being brought to the modern marketplace to distract us from the lack of classic Nintendo titles being released. In any case, there’s a niche and a demand for these throwback games, and so, when Flying Tiger Entertainment decided to put Johnny Turbo’s Arcade: Gate of Doom onto the Switch, I knew this had to be the next game I delved into.

The long title comes from the fact that Johnny Turbo was the former mascot of the much maligned Turbografx-16, a game system that predates many people’s memories and is held in a similar mythic regard as the Sega Dreamcast, although the Turbografx-16 had a much, much warmer welcome and life in Japan. Johnny Turbo is the moniker of John Brandstetter, who used to work directly with the Turbo Technologies team and now is, surprise, part of Flying Tiger Entertainment. In any case, Gate of Doom was an arcade game that had a surprisingly strong following back in the 90s, faded into obscurity, and had its license acquired by FTE, who brings it to us now on the Nintendo Switch. This history lesson isn’t really important, but I do find it interesting: there’s an entire legacy behind the people who helped video games survive after the crash in the 80s, and those folks are still with us today, just in very different roles than some of you may realize. 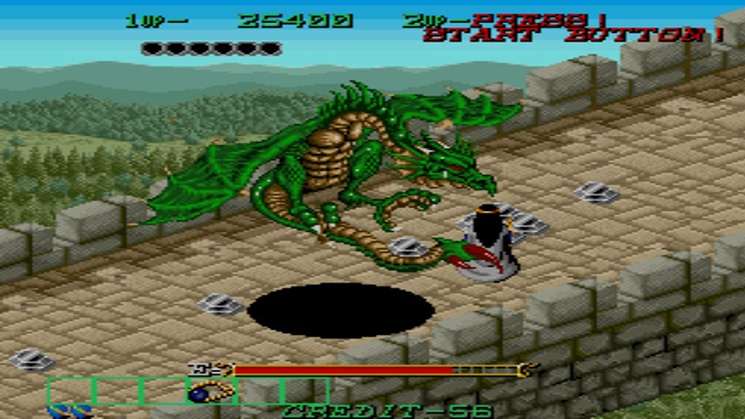 So, Gate of Doom is pretty standard in terms of storyline, but also surprising because we are actually given a storyline. The king of a kingdom realizes that this “Gate of Doom” has opened up and now hordes of terrible monsters and dark creatures are ravaging his kingdom. He needs it saved by any means necessary, and recruits the four best folk his kingdom has to offer: a knight (naturally), a wizard (works), a bard (really?) and a ninja (wait…what?). Any two of these brave souls may be the key to defeating all of the monstrosities that have spilled forward, from shambling skeletons to mighty elemental dragons, and eventually battling the evil Lich warlock who’s at the heart of this whole ordeal. Let’s be honest, it’s far from totally original, but at least it’s something. I still wouldn’t know why I went into the dungeons of Gauntlet had I not read the booklet that came with my game, so the fact that this arcade cabinet action RPG has any sort of setup at all is impressive.

And yes, this is RPG in terms of what an arcade RPG can be called. Since you get to pick your character and there’s technically a difference in how each of the characters handles the game, it’s a role play of sorts. As an isometric action game, Gate of Doom puts you at an odd angle to watch your spirited hero delve in and fight off legions of bad guys, occasionally picking up healing items and gradually charging up your magic meter to eventually do some amazing transformation that kicks ass and makes you somewhat invulnerable. This magic meter in no way affects how the wizard attacks, so don’t be afraid to go nuts with the fireballs all the frigging time. In fact, that’s the only way to really survive this game is to carefully but constantly spam the screen with attacks to keep things from overwhelming you, since the isometric part doesn’t work as well as you’d like it to in terms of perspective. Far more often than I care to admit, I thought an enemy was in my reach and range when, in actuality, they were slightly off to the side and could hit me, but I couldn’t hit them.

Each of the characters has their own qualities, and I recommend giving them each a try in the play of the game. Knight is the obvious choice, with both a great mace/flail/rocket arm and the ability to change into a water elemental when the going gets tough. Wizard and Ninja both have slightly faster and wider attacks, but they seemed less accurate. The bard…ok, I don’t understand why anyone ever tries to bring a bard into literally any game. Sure, they have their place in tabletop RPGS, but I would never, under any circumstance, attempt to solo a game as a bard. They’re weak, they’re flammable, and music doesn’t affect half the creatures you encounter in any module or mission. At least in Gate of Doom, the bard has a decent attack radius, but it just feels…so boring. His big thing is he doesn’t get poisoned, which is actually super helpful if you get hit a lot (the first few bosses all poison you). On the other hand, if you’re just accurate and don’t get hit at all, this ability goes out the door, and you can, instead, be a ninja and throw some shuriken around, which is infinitely cooler. 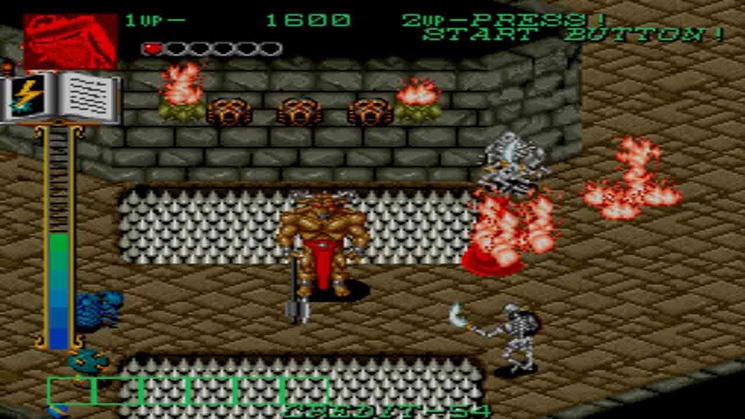 Johnny Turbo’s Arcade: Gate of Doom does the game a proper service by offering a wide variety of adjustments to the screen and resolution in order to achieve the most “authentic” look you’d want. Besides tweaking it from stretched to 4:3 and 16:9, Johnny also baked in a ton of filters to emulate the kind of monitor you most want to remember the game being on. Add in some horizontal lining, a little bit of sepia fade, hell, make it look like you’re playing the game back on a VHS deck. All of these exist, and they’re all done with a pretty good sense of quality. It’s very akin to what I saw in Gunmetal Arcadia, only this feels even better because this game actually did have a time where it was on such machines and with such display. Even though I love the nostalgia factor, I still opted to turn off all filters and play the game as clean and crisp as I could.

The only real downside of the game is right in the title: Arcade. This isn’t a play that’s meant to eat up multiple days or even hours for the dedicated gamer. If you do co-op and your friend doesn’t hide the Joycon in his(or her) ass, you’ll be able to go head to toe on this one in less than an hour. Now, I have to balance this by saying that I wouldn’t want it to go longer than that. Gate of Doom does a phenomenal job of giving the player a ton of variety in terms of terrain, monsters and treasure in a short amount of time, and the weird voice over work is enjoyable and delightful in the limited quantities that it exists. Had this game taken several hours to complete, I highly doubt it would be nearly as enjoyable, and it’s something that offers replay value with different character matches. The game makes sure you can’t choose two bards, so it’s actually possible to finish with any combination of heroes. Still, newcomers should be aware of what they’re getting into, lest they drop their weekly pocket money into this title and come up disappointed and short.

But for those who either remember or romanticize the heyday of arcades, Johnny Turbo’s Arcade: Gate of Doom is a fine and fitting vessel to embark upon. I had a blast, and it will stay in my top scroll for a least a little while in terms of camp and enjoyment. My only hope is this isn’t the last we hear of Johnny Turbo on the Switch, and that Flying Tiger Entertainment might be bringing something else down the road to our little console.