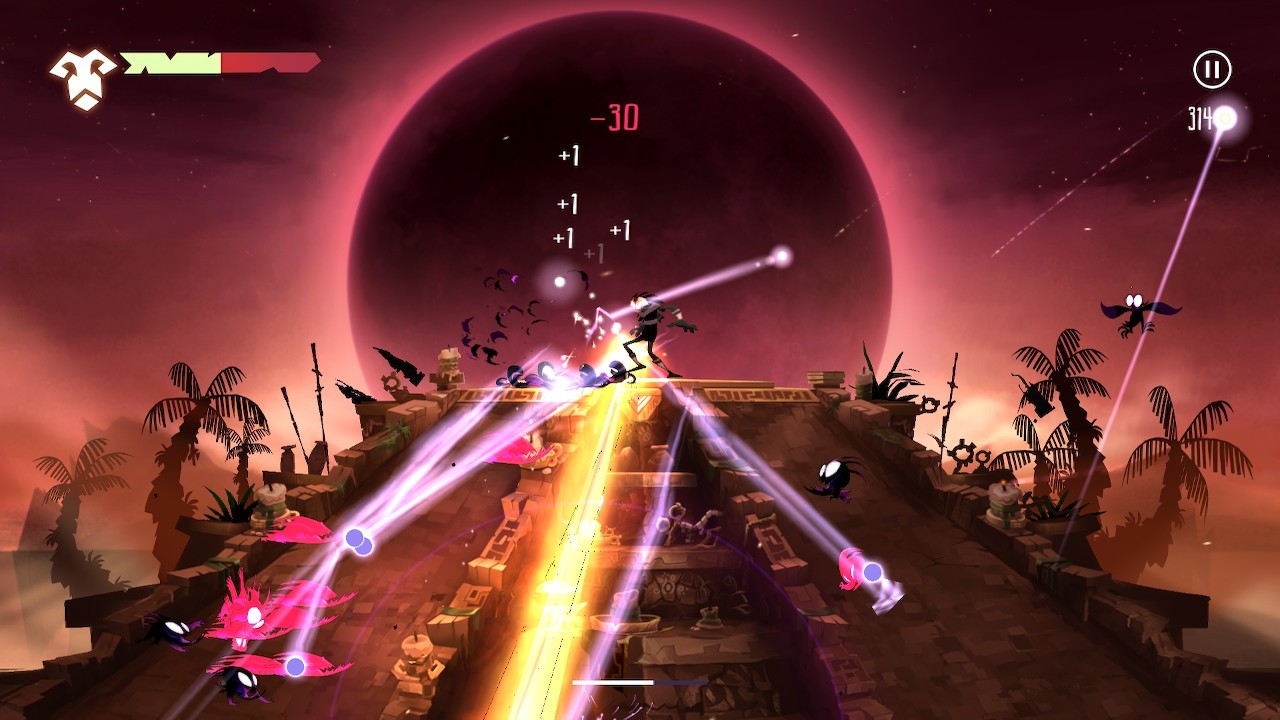 I’m sure if we were to conduct a survey, most people wouldn’t say that they are swayed too much by the visuals of a game over gameplay or story. That’s a no-brainer. However, it helps when things look good. Towaga: Among Shadows is absolutely gorgeous. From the opening cutscene straight through to the action, it feels like the game is a movie tie-in, or based on a popular Cartoon Network show.

Playing as light-bearer Chimù, you take on Metnal the Voidmonger – a shadow-like nasty intent on spreading the world in darkness. You are the last hope and a literal beacon of light that blasts these enemies out of the sky and off of the numerous shrines you are sworn to protect.

The available options are pretty varied; a Story Mode, Survival, Flying and the Void Realm. Let’s begin with the Story, as that will be what most people will play at first. We opened with the visuals, and that admiration continues with the character designs – both Chimù and the enemies; the animations are superb. As Chimù, you take centre stage – in the centre of the screen – and defend your position by firing a mixture of your light beam (by holding down the right analogue in the direction you wish to attack) and with your available magic with the ZL button. Each time you kill an enemy, it unlocks an entry in the Codex which you find at the title screen. 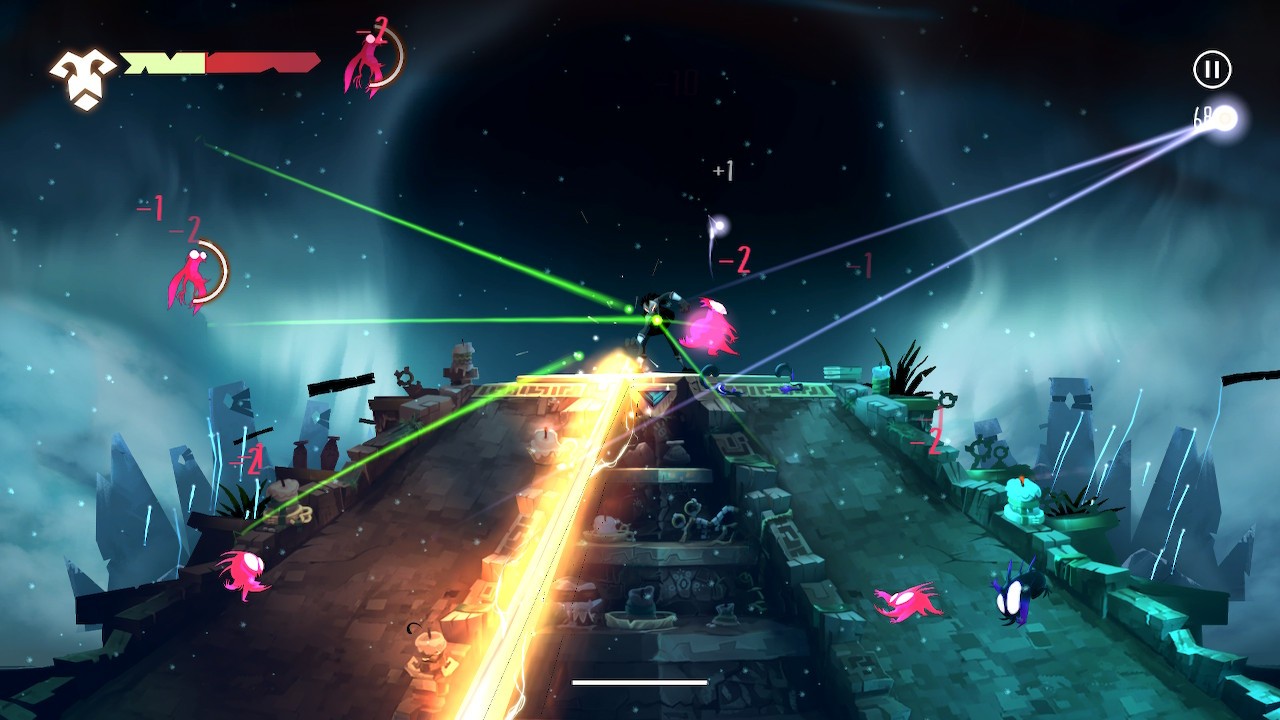 The levels are called a Phase and are usually pretty quick – 40+ in all. That’s not to say there isn’t a challenge. When you strip down the presentation, the concept is pretty simple: move the right stick to wipe out the waves – never being concerned with running out of ammo or waiting for a cool down, then when you get swarmed, use your magic. Magic in the game isn’t an ace card you can rely on; it’s an invaluable tool to stay alive. Towaga: Among Shadows is a challenging, but fun game. What starts out as a reasonably straightforward task soon borders on overwhelming early on, but there’s an assist mode should you get stuck, and this gives you 50% more health and damage and makes the game a breeze if you require it. Just when you think you’ve got the hang of it though, Chimù powers up and shoots up into the sky for the second part of the game.

In the flying mode, you hover in the sky doing the same as before, but without the spells. At first, I thought the freedom to move around was needed for the game, but I found that I preferred the stationary position and felt this section was a little more monotonous. Once you complete the first few flying phases, it shifts to the ground game, and back and forth when you’re near saving a shrine.

As can be expected, there are mini-bosses too to take care of. They’re slightly overpowered in places, but one of the great things about the game is the ability to shoot enemy projectiles. Sounds easy, but when you fight harder enemies while being attacked by lesser ones, it’s pretty easy to get caught out. However, the controls in the game are perfect. While moving the stick around without holding a button at the same time sounds lazy, it’s quite taxing as you need to be alert all the time, but the accuracy is perfect. Hands down, this is one of the most rewarding experiences when targeting enemies as your focus doesn’t wander off or you miss the baddies on the attack. The ordeals that follow are based on the sheer number of attackers and multitasking at a level sufficient to survive! 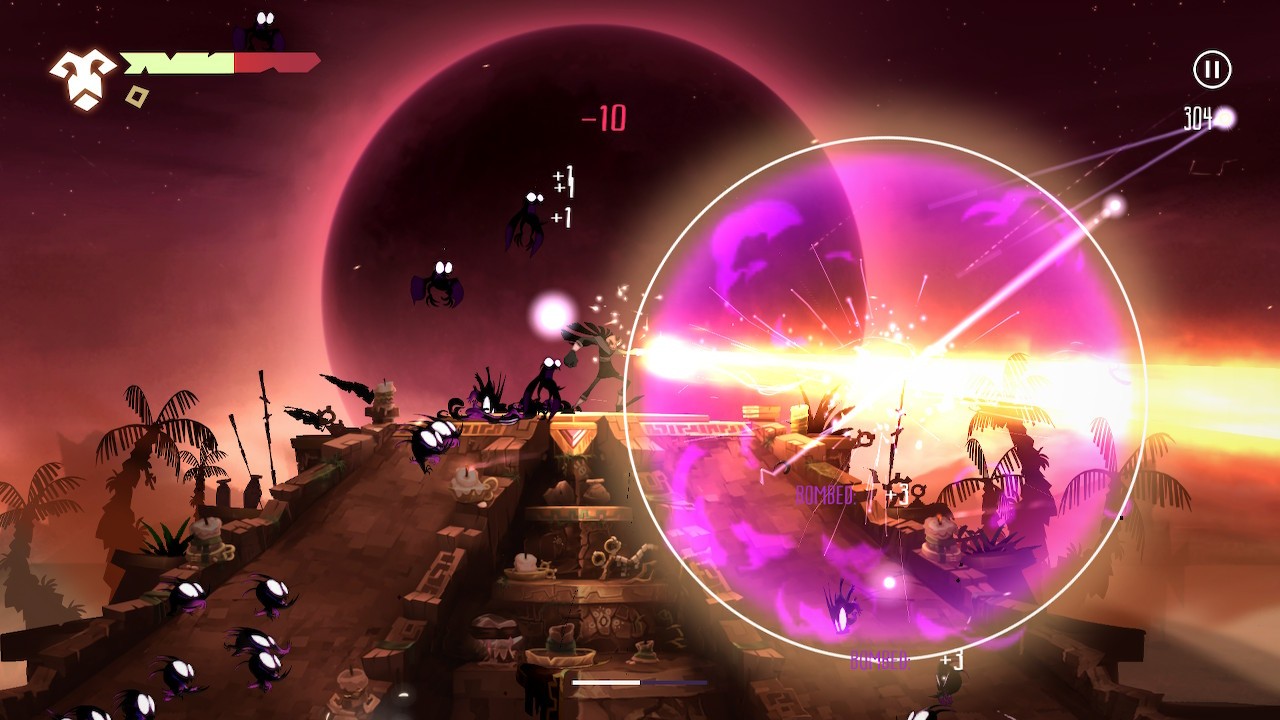 In the beginning, you can play either a single or multiplayer game – all the additional options such as your Profile, the Codex and Trials are all locked, but after the very brief introduction, you can access them almost immediately. The currency in the game is soul shards, which you earn through playing the game, and it’s quite scarce. In the Profile section you can spend your shards on new powers, spells and outfits, in the Codex is the list from the bestiary and with Trials, these aren’t bonus stages, but an archive of the items you’ve unlocked in the game. Think of it as in-game achievements. With the Profile, it’s pretty broad as you can upgrade your beam size and damage, health points and mana points among others. As for the spells, these are pretty devastating, but unlike being able to see the available upgrades for your character stats, spells have to be unlocked through playing the Story Mode.

What surprised me most was the enjoyment that came from the survival mode. As someone more interested in the story than hi-scores, I’m fairly dismissive of these modes and only playthrough to justify a review, or perhaps unlock new items. There are two survival modes – the first is from the ground and the other from flying. For both, it’s absolute chaos and nothing like the story as it’s non-stop attacks from all angles and I found it impossible without upgrading the spells. There are six to unlock through the story, but my preference was the opening spell as you can disperse the enemies with a bubble-like attack that will stop them in their tracks and allow you to focus the beam elsewhere. The challenge can be brutal, but there’s something enjoyable about it where you feel like you’re making progress – even if it’s only 10-20 points at a time.

After a while, Towaga: Among the Shadows started to get a bit familiar, and it is a repetitive game, but an excellent one at that. Once you finish the story, the focus is with the story more or for hardcore gamers, the Void Realm, which is a beast. Will this be a game you keep coming back to? I think so. Sometimes the simplest of ideas are the better ones, and there’s definitely an addictive element to the game. The story isn’t going to win any awards, but it’s decent nevertheless and should be completed before tackling the survival modes (you need to level up and perfect your aim!).

A stunning mobile-like title that works great on the Switch. The main attack using the right stick is spot-on, and despite its simplicity, Towaga: Among the Shadows is an enjoyable game for those wanting to set hi-scores.