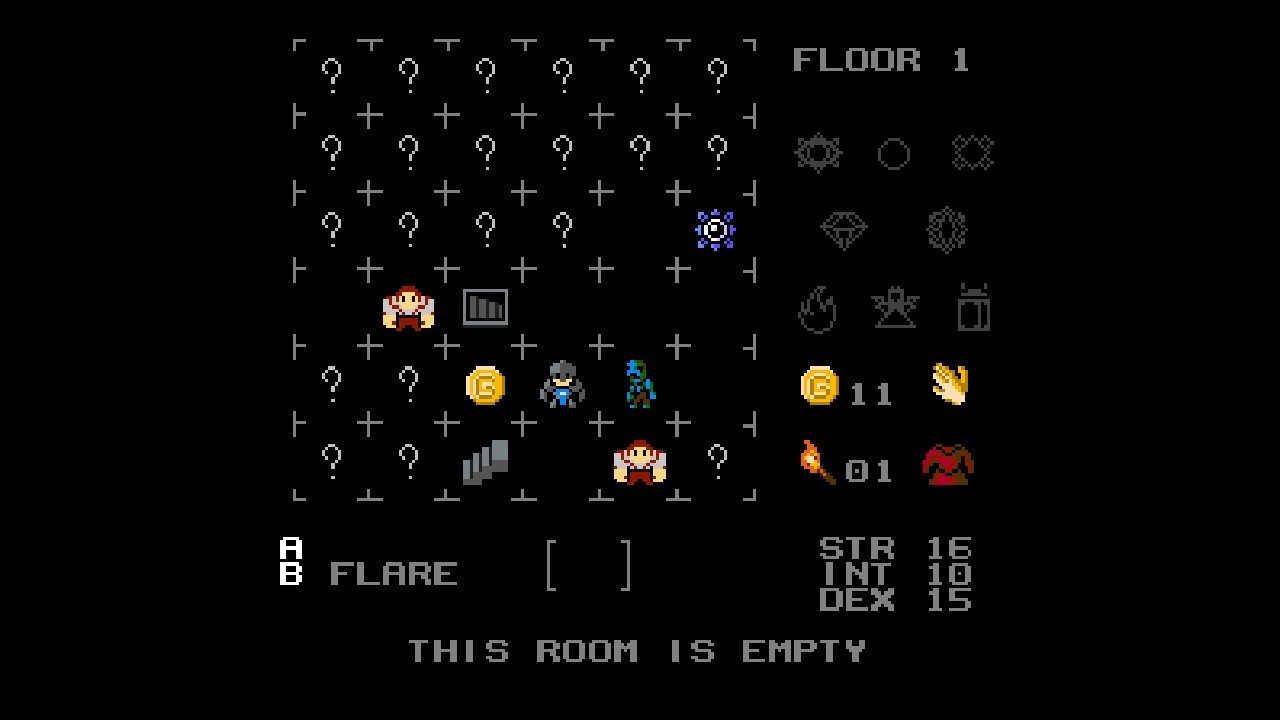 There is something oddly familiar about Castle of No Escape. There’s an air about the game that feels like it’s almost touching the meta, like there’s a bit of something bubbling just beneath the surface. It’s not the game itself: this self-admitted game jam product that feels like it’s from a solo developer (Xitilion) is straightforward while still being utterly confusing. I mean that the presentation has an air of Pony Island to it, something that feels like it should be secretly another thing while masquerading as itself. Even the fact that the FAQ in the main menu is listed as a readme.txt smacks of a small ribbing to PC games of yore. However, after several hours of exhaustive gameplay to see if there was a secret mode or some kind of hidden meaning, I can conclude that Castle of No Escape is not, in fact, an enigma machine of gaming mystery. It’s merely a modest title that feels a bit like an homage to old games, but focuses on the wrong aspects.

The setup is simple enough. Castle of No Escape is about five artefacts (which the developer spells artefacts) that are hidden within this castle by the demon Nikolai, and you need to get them all in order to defeat the boss and then win the game. What’s really strange is that the readme deliberately states that there isn’t really a way to escape the castle (hence the title), so even the ending might be a tad unfulfilling for some. Nevertheless, you’re able to choose from three heroes who all are basically the same but have different stats (which is an important kerfuffle we’ll see in a moment) and dive into the procedurally generated castle. At least, I think it’s procedurally generated. I couldn’t sense a pattern, but there’s a chance there’s just a bunch of pre-constructed floors that shuffle themselves, though I don’t think that’s the case.

At first glance, someone might be forgiven for thinking that Castle of No Escape is a Nethack-style game, but it’s far simpler than that. It’s a grid based exploration game, where your hero can move in one of four directions to uncover the tiles and discover stairs to go up or down within the castle. Along the way, there are many things hidden under the tiles, such as books that may buff you, debuff you or do nothing. There are enemies that you can theoretically run away from, but they usually get one swing at you as you flee, and killing them might drop gold or items. There are flares, the most useful goddamn item in the game that is also the most frustrating. You’ll find spells, traps, treasure chests, and, hopefully, some of the aforementioned “artefacts” that protect you from curses that exist within the castle. 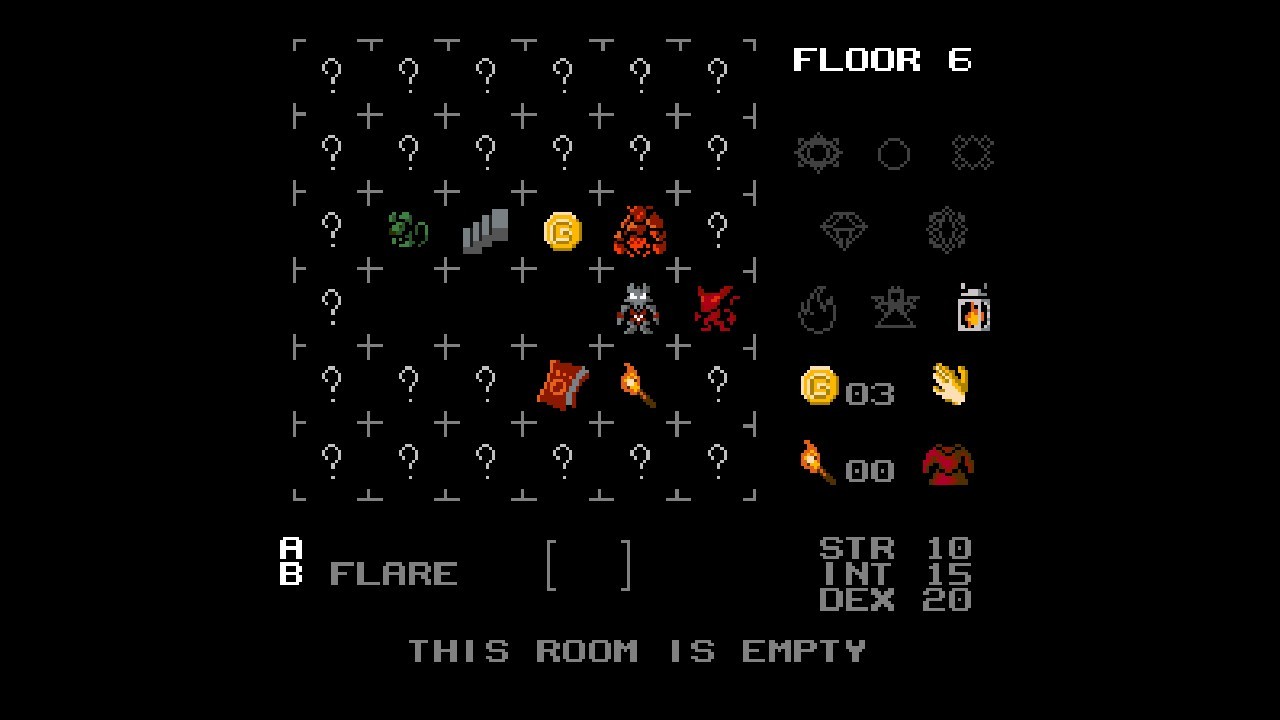 Castle of No Escape does a fantastic job of capturing the retro presentation of this style of game while also maintaining a tad of a modern edge. The layout and the soundtrack feel like they were lifted straight out of a NES game, and the sprite work for the enemies and heroes seem like they could have been right at home on the shelf of a 1988 title. As a result, sometimes the sound balance can be a tad off, but there’s nothing upsetting or offensive about that: it can just be LOUD. Additionally, you get a good sense of what you’re doing and where you’re going, particularly when the flares go off. There’s no confusion about whether you’re facing down a snake or about to step into a dreaded sinkhole. The visual aspect, hands down, is the better part of the game.

The gameplay, however, becomes a mess from the drop. The aforementioned stats of Strength, Intelligence and Dexterity affect different things that you deal with, but also have their own double duty roles. Strength is the biggest offender, as it’s apparently also your HP. Which means that, if you get in a fight and the enemy gets the drop on you, you end up suffering a loss to health and hitting power, a death sentence for anyone being a bruiser. Keep in mind this also uses the old school rules where different traps and spells can also deplete your stats, and you will die if one of those stats hits zero. “You have died from lost of strength” is a window that I saw often, particularly when I started drinking from magical pools in an effort to totally max out my stats through random, insane dice rolls.

The flares are so incredibly important and a somewhat broken part of the game. If you’re lucky enough to get a fistful of flares within the first couple of rooms, you’re set. Flares will show you random rooms on your floor, and they are often not adjacent rooms, but one’s way the hell on the other side of the floor. As a result, Castle of No Escape offers the idea of a chance for your character, often illuminating what could be a super helpful treasure chest with a better weapon about eight unknown rooms away, and maybe you can get there safely or maybe there’s six dragons between you and that spot. The flares help to highlight the wildly unbalanced aspect of how enemies and items spawn, so the flares, besides being helpful for playing, also shed light on the game itself and why it might be a pass for some people. 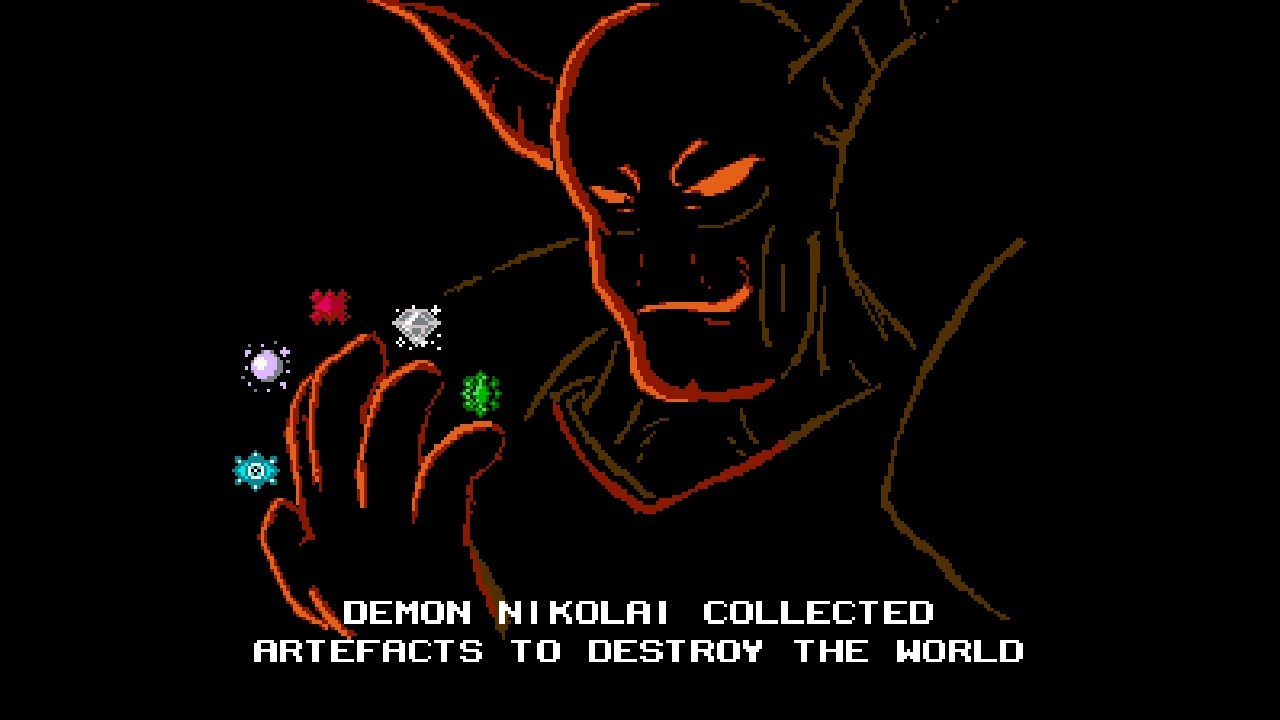 The fact is that Castle of No Escape reminds me HEAVILY of a game I played on the Apple IIe as a child called Wizard’s Castle. I loved this game because it was the first fantasy title I ever played, long before Wizardry or Ultima or any of those. Wizard’s Castle was all text based, but the premise was very similar, in that you needed to find this super important McGuffin to beat the wizard and flee the castle. In that, there was no rhyme or reason for what happened because everything was locked away behind algorithms that the player couldn’t see and there also weren’t any graphics to view. Castle of No Escape seems to have the same fallacies. When you “attack” an enemy, you either hit or you don’t. Keep pushing attack until the enemy dies or you die. Run away and then keep running. Find an item or don’t. Drinking from the pool could magically give you back all your HP or you could die from lack of Intelligence. It’s all up to chance and that should be exciting but it isn’t.

As a result, Castle of No Escape feels like you’re playing a solo tabletop campaign against yourself, with all the charm and excitement of making sure you don’t cheat. There’s no thrill or wonder about what’s happening. You plod along until you die, see you die, and get kicked back to the title screen, complete with having to skip the opening again. The spellwork can sometimes be helpful if you go with a more magically based character (there’s only three to choose from), but the likelihood of death by stupid increases dramatically when you put your faith in magic. The first room you step into could be a sinkhole that drops you on top of a dragon, and where the hell is the fun in that? There’s just too much chaos, too much “random” that happens while still being very restricted to make a replay value out of this title. Even the weapons and armour suck: opening a chest might get you “better armour” with zero name or explanation as to how it’s better.

This is a simple game, and it might draw a crowd who likes old school ideas on their Switch: God knows there are plenty of those sorts of grabs already, so why not add another? But I wasn’t frustrated or angry with Castle of No Escape: I was bored quickly, and nothing really lifted the boredom. It’s just not a great showcase of what an independent title can be, and I think players need to be aware of what’s in store before they dive in.

Castle of no Escape Review

A throwback style game that makes you throw up your hands and wonder what you’re doing with your free time.