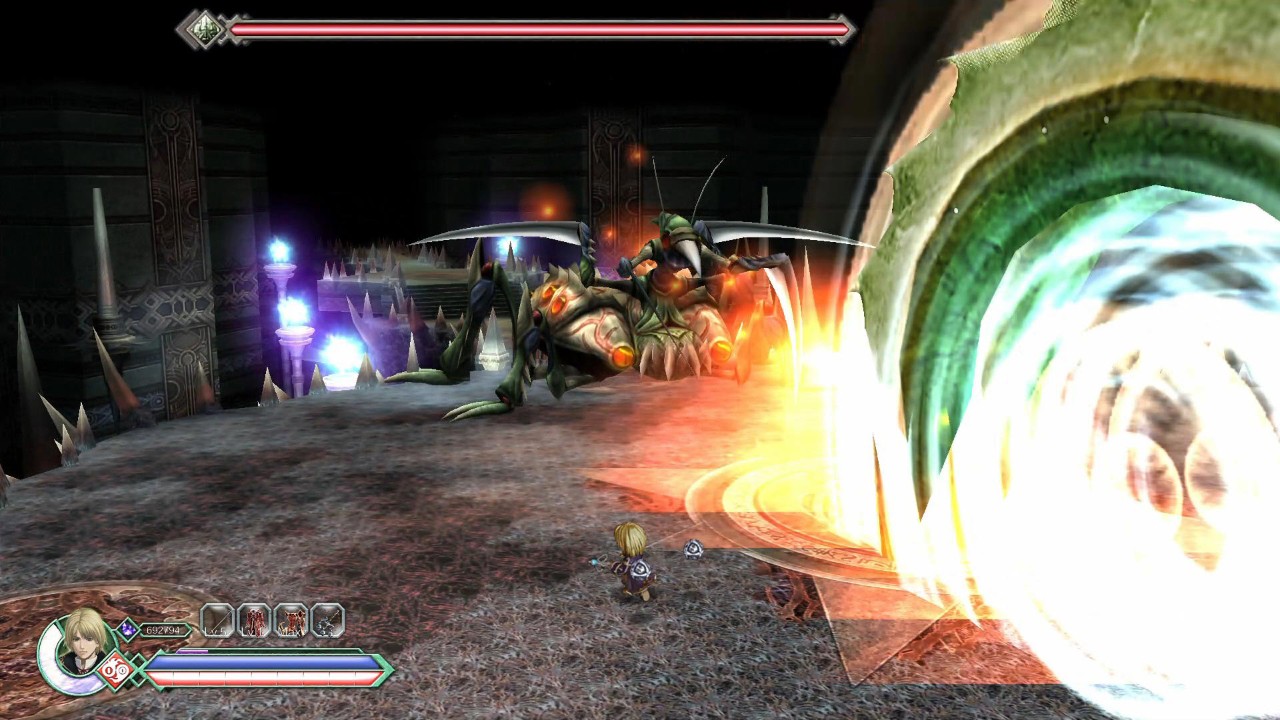 I never got deep into any other game in this series, so this is my first real contact with the Ys franchise. I can barely remember when I played a Ys title on my old PSP fat, because I had fun with it for 1 hour or less, so I guess it doesn’t count as. On my first true contact with Ys series through Ys Origins, I really thought that I was going to find something with more action RPG centred, and I caught myself half wrong. Actually, there’s a few action RPG elements in this prequel to the eight previous games of the Ys series, but much more of a dungeon crawler approach mixed with platforming elements.

The story is set in a land named Ys, governed by the twin Goddesses Reah and Feena and their six servant priests. Everything was calm, and the people of Ys could make miracles through casting magic provided by a holy artefact. Suddenly, a group of demons came to the land, bringing death, and the protectors of Ys were less numbered than them, resulting in a lost battle. To keep people alive and safe, the Goddesses used the power of the holy artefact to raise Ys to high places in heaven. However, the demons also built an enormous tower and fought Ys in the skies. During all the battle and chaos spreading throughout this war, the twin Goddesses departed without telling no one of it. So, without them, the land became in ruins, which made the six priests organize a search party to find out the Goddesses in the demon’s tower, reuniting the most talented knights and sorcerers of Ys. 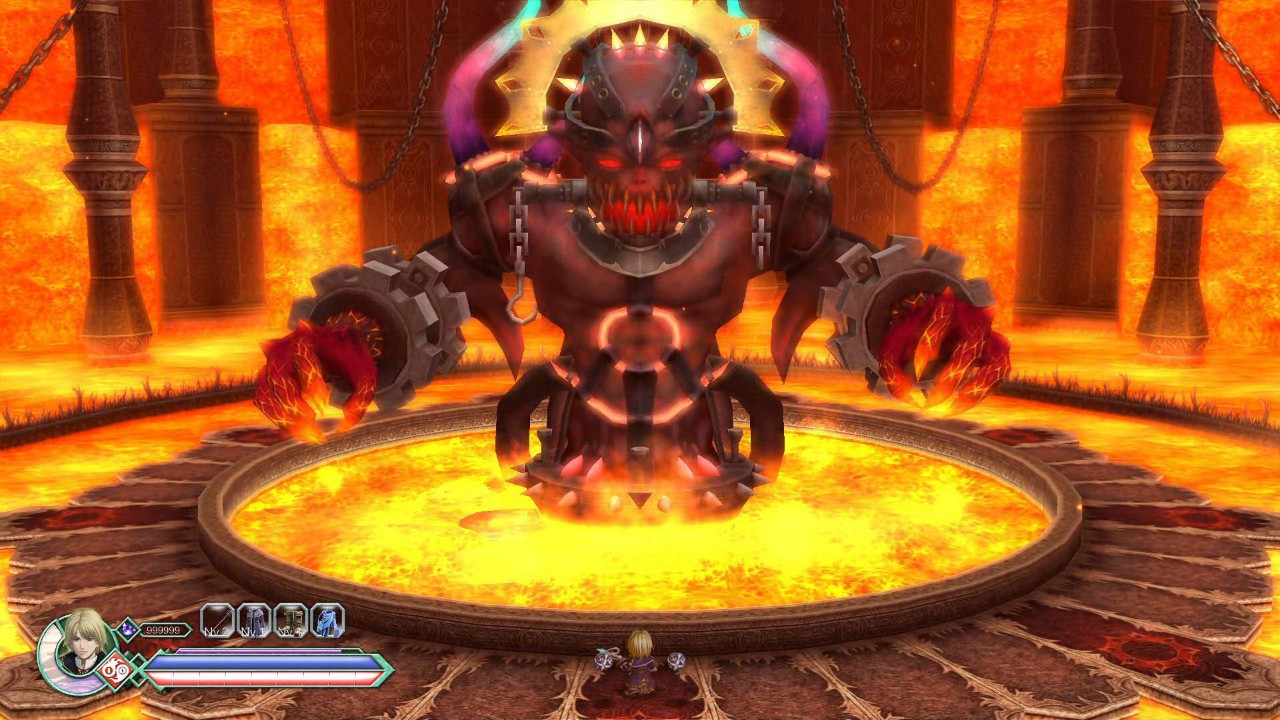 You can choose between two characters to follow their respective yet not so different storyline: Yunica Tovah (close combat) or Hugo Fact (ranged attacks). Both of them start at the bottom of the tower built by the demons, exploring each floor and fighting bosses. The controls are very fluid, and we’re not limited (optionally) to 8-axis only. I thought the Yunica was a much better character to control, since she has a hack ‘n slash gameplay and the game doesn’t offer an aim command nor a way to control the attack’s direction using the right analog stick. As Hugo is the ranged one, you’re going to catch yourself needing to run in the enemy’s direction to avoid missing hitting them. Of course, the game was originally released in 2006 and I can’t remember any game that already had an aim functionality at that age. Anyway, bringing Ys Origin back in 2020 could have included some improvements to the general gameplay. It’s not a huge issue, but it makes Hugo at a disadvantage compared to Yunica.

When it comes to the gameplay, Ys Origin is a blast. Slaying enemies at a ridiculously fast pace is ultra fun, and the game totally stimulates it because there’s a chain system that increases your gained experience until 2x by maintaining the chain’s bar filled. The game starts with the character having its basic attack plus a unique ability, but is possible to level it up despite finding out other skills during the plot. However, there’s some needed grinding before you face the bosses, so probably you’ll die if you try to beat them at a low level. But the game compensates for this by delivering a solid combat experience, respawning foes every time you come again into a room again and being mandatory to destroy a red flashing enemy before unlocking a passage. 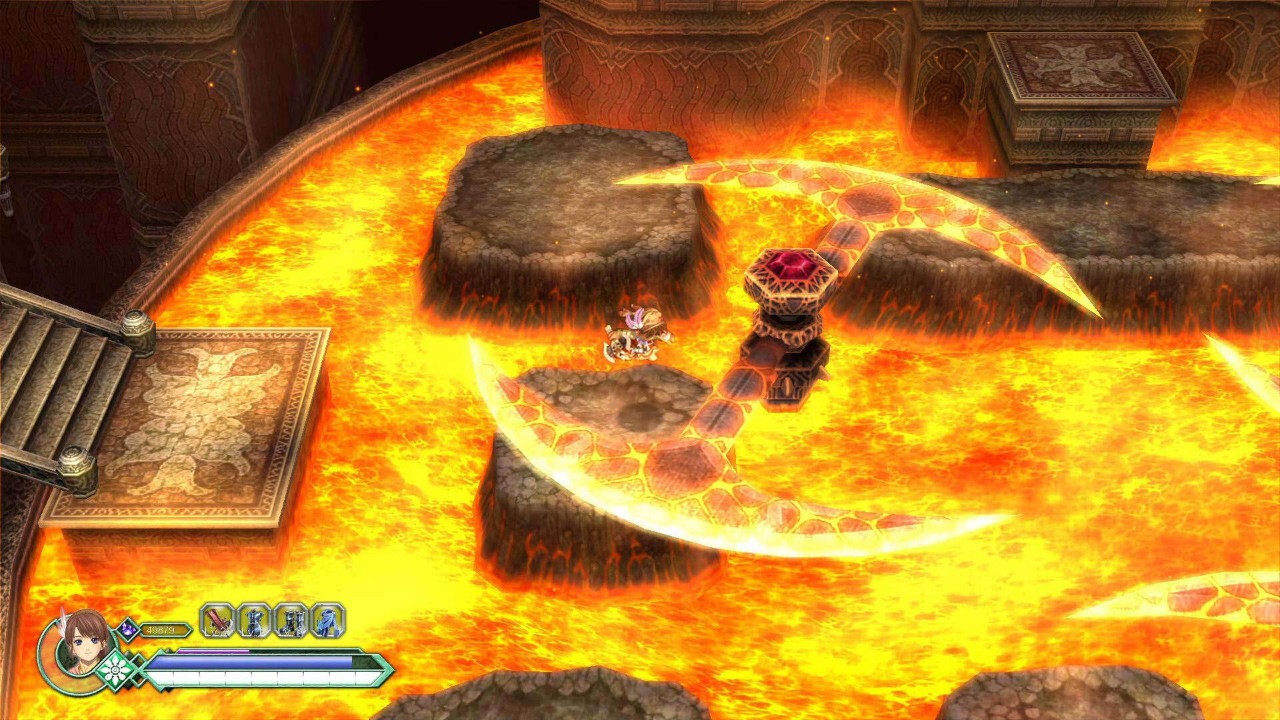 Even though there’s no way to store consumable items like potions, and things like that to use later, the enemies constantly drop stuff that heal your character and let you buy perks at save points – so you’ll not only get stronger by levelling up. Speaking again of these boss battles, they’re quite challenging, and you have to pay attention to their pattern to find the best strategy and the right moment to attack – I died about 10 times on that centipede one. And be warned: during the boss moments you can’t access your equipment menu or even pause the game.

Apart from the dungeon crawler gameplay, there’s also a few platforming challenges, which you need to pass through timed floating platforms after pressing a button, swim underwater, avoiding spikes, etc. Finally, despite all the fun the game can offer, it can feel a bit repetitive. The tower structure is very similar, and the way to progress is always the same: beat the boss, proceed to the next floor, crush enemies, and that’s all. As I said before, is a game from 2006, and of course there will be some dated elements. The gameplay can hold well at all, the super deformed character visuals are pretty even though the background 3D environments are not, and the music is ok – is a better enjoyed game while listening to a podcast, I gotta say. After beating the story mode, you can unlock a new character, extras like arena mode and time attack, and play everything again to experience each character’s point of view. There’s also a little difference between Hugo and Yunica in terms of the story, besides some different bosses and, of course, the general gameplay. In the end, Ys Origin is worth it, being somewhat distant from the latest Ys titles. But, if you’re a fan of dungeon crawler titles with challenging bosses, go for it.

Ys Origin is a game from 2006, brought recently to Nintendo Switch. Even thought some elements can feel outdated, the gameplay can hold it well.