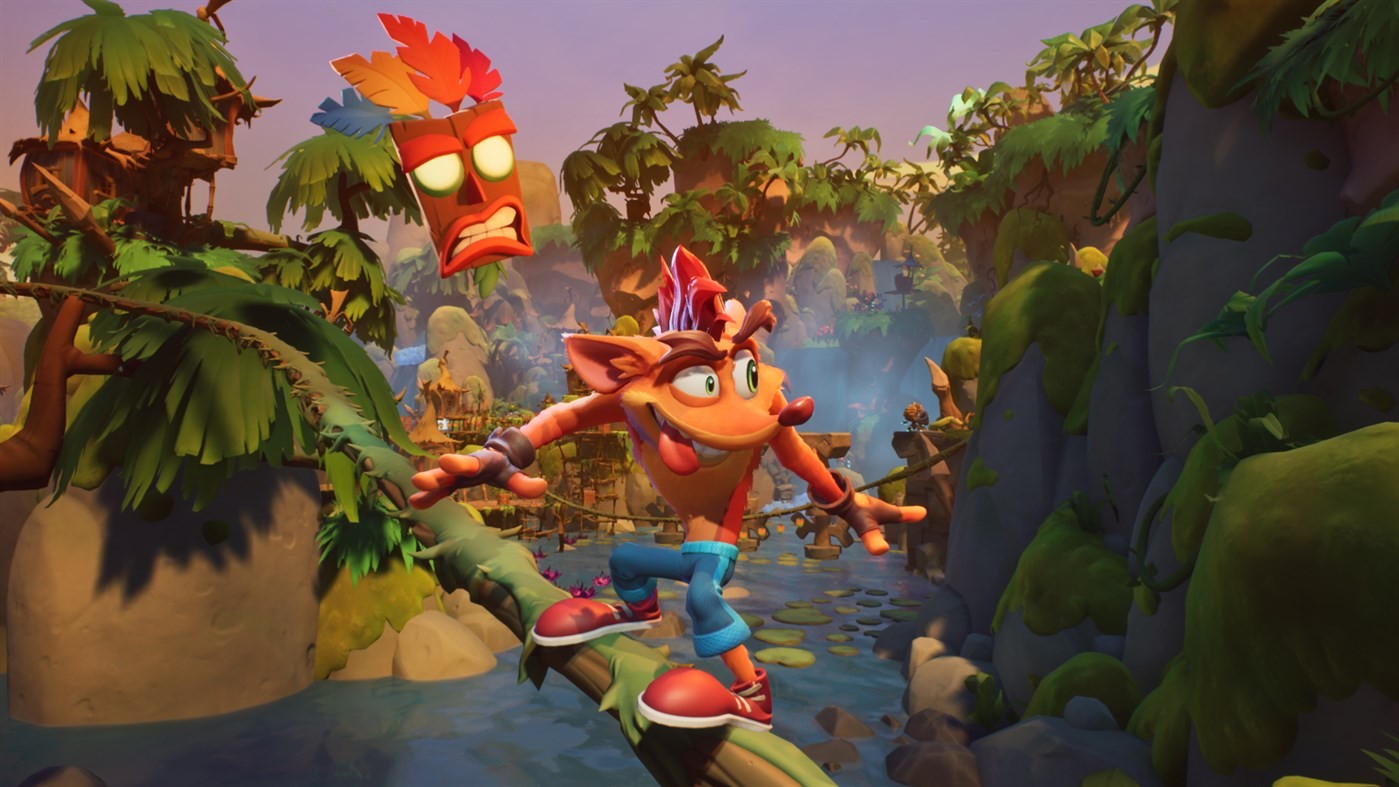 After several years without a breakthrough in the world of Crash Bandicoot games, Toys for Bob, through Activision, presents us in 2017 with the collection Crash N. Sane Trilogy. The set brought the three titles of the classic series in one package, completely redone – despite the company considering them a remaster, with updated controls and unique gameplay of the three games through the same engine. As the older players probably already know, the first Crash Bandicoot is a very clunky game these days, in which controlling the protagonist is not a very pleasurable job considering that he has no free movement, but in eight directions since it was based on the PlayStation 1’s digital only control.

Anyway, the remake of the trilogy was a smash hit, so much so that it was exclusive to PS4 at first, but later received versions for Xbox One, PC and even Nintendo Switch. A few years later, rumours of a new Crash heated up more and more, and the fans went crazy – I included myself in that. Crash Bandicoot 4: It’s About Time was announced and released in 2020, making promises to be a worthy and quality successor to the original series – disregarding all spin offs released so far.

Crash Bandicoot 4: It’s About Time is the fourth game in the original numbered series of the most famous Bandicoot in the gaming world. The story continues the events of Crash Bandicoot 3: Warped. After many years in prison, Neo Cortex, N. Tropy and Uka Uka (the evil mask) escape and create a hole in space-time. With Uka Uka exhausted from having used all his energy to create this break, N. Tropy sees the perfect opportunity to build a machine, along with Neo Cortex, who would create more interdimensional cracks, intending to dominate the multiverse. Aku Aku feels the danger arriving at peak N. Sanity and wakes up Crash to find out what is happening, thus starting the fourth game in the series with plenty of nostalgia. These are scenes that refer a lot to the first title of 1996, as well as references to Activision franchises like Spyro The Dragon.

When it comes to gameplay, Crash Bandicoot 4: It’s About Time follows the same platform pattern as classic games, but with many touches here and there. I would say it’s a much improved version of N. Sane Trilogy with the three games remade – which is just amazing. The levels continue to bring the franchise’s established gameplay, with 3D scenarios and fantastic art direction. The movement again is free with the fixed camera, many times it is necessary to go “ahead” to advance in the stage, while in several moments the gameplay becomes something like 2.5D with horizontal progression. 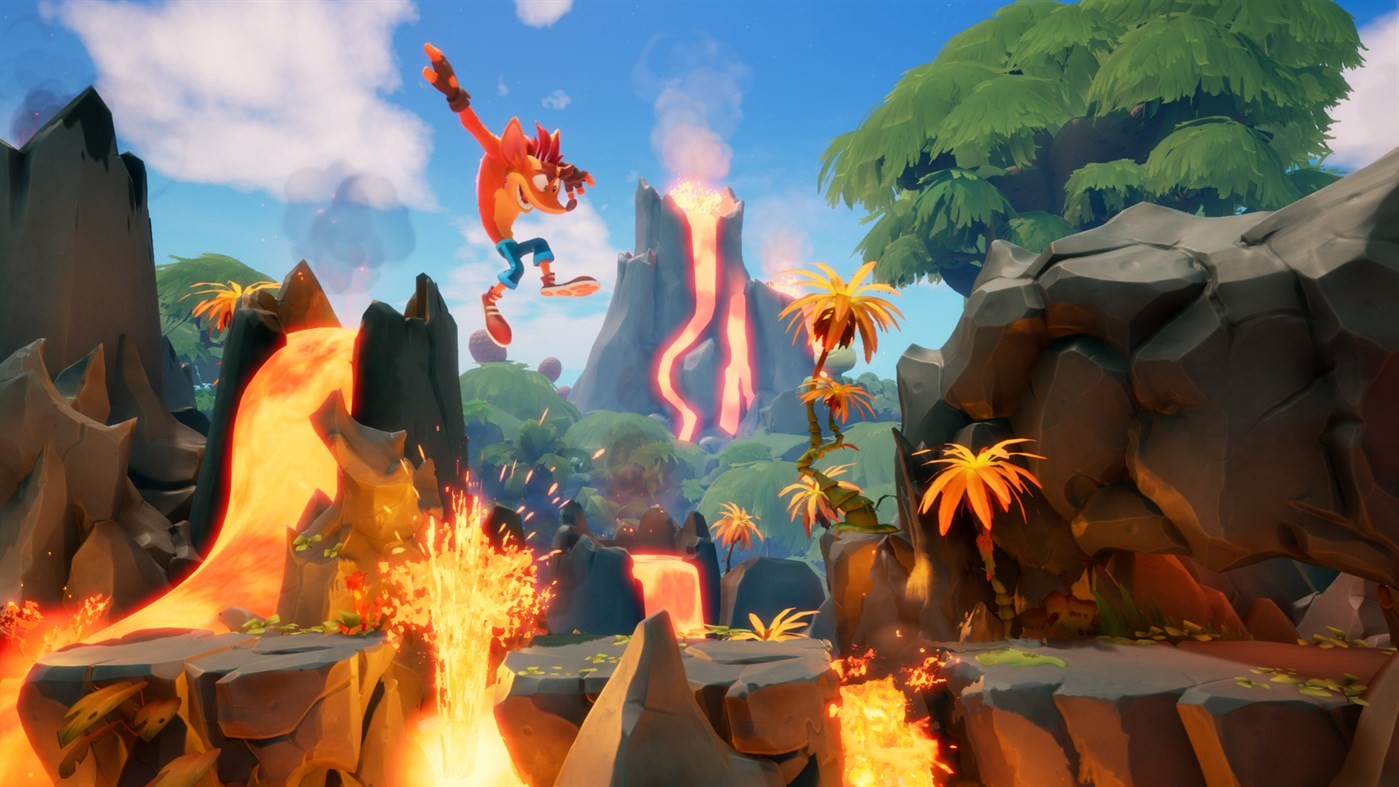 We selected the stage in a place called a dimensional map which contextually brings playable characters of parallel dimensions, like Tawna – Crash’s girlfriend -, with a very stylish dyed undercut. It attacks with melee blows and makes use of a hook to stun some bigger enemies while eliminating smaller ones, as well as saving the character from death by “hooking” in places with support for it (masts, walls, etc). She also gets a boost on some walls to climb to higher places, practically becoming an acrobat Bandicoot. We also have Dingodile, one boss from the classic trilogy, who uses his vacuum cleaner to suck TNT and other items, besides being able to float over the holes and precipices with it. Its main attack is made with the tail which the character rotates to eliminate enemies and destroy the crates.

As if that were not enough, Neo Cortex becomes a playable character after joining Crash at a certain point in the game. Its gameplay is much more focused on platform and puzzle. His main attack is through his lightning weapon, which turns enemies into fixed floating platforms or acts like a bouncing one which compensates for the villain’s lack of double jumping skill. His weapon also breaks boxes with the shots and, in addition, Cortex can dash in the air. Although these characters are not playable at all stages, it is possible to switch between Crash and Coco in any chosen scenario.

In Crash Bandicoot 4: It’s About Time there are completely diverse stages, bringing environments such as jungles, deserts dominated by the now metalhead N. Gin and his headbangers, icy, futuristic, oriental scenarios and even the classic prehistoric ones. Also present are the challenges of escaping dinos and other monsters, in addition to the moments of Polar bear riding or other characters never seen before.

As a novelty, now Crash takes a double jump even after taking a super jump after crouching – this even opens up an achievement showing that it really is a new possibility. Fortunately, this feature was added not to make things easier, but to create new challenges out of it and actions that require its use – a good example is the boxes in higher places and holes farther away. Crash also does things never seen before, like hanging on ropes, hitting with his rotating foot and walking on the walls like some prince of the Persia. Oh, Wumpa fruits now work in a magnetic way, so you don’t have to go to them to collect them.

There are the so-called flashback tapes that can be obtained within the stages that we pass through without dying once. These tapes release extra stages that show Crash’s past as a Cortex guinea pig, applying a retro filter over the view. Tutorials are now contextual with the stages and actions. Did you know that to destroy a box under TNT you just need to spin “standing”? I always did it through “my own feeling”, I never knew that there is actually a rule for this to be done.

But the biggest replay factor that will want you to finish everything 100% is the following: new skins are unlocked with all the gems acquired in each stage. These gems are obtained through several criteria: 40%, 60% and 80% of the collected Wumpas fruits; all boxes destroyed; Maximum 3 deaths and the collection of a hidden gem in the level. It is unnecessary to do all these tasks in the same attempt, so finishing a level in any % is a very valid option for those who do not want to do everything and want to see the end of the plot as soon as possible. 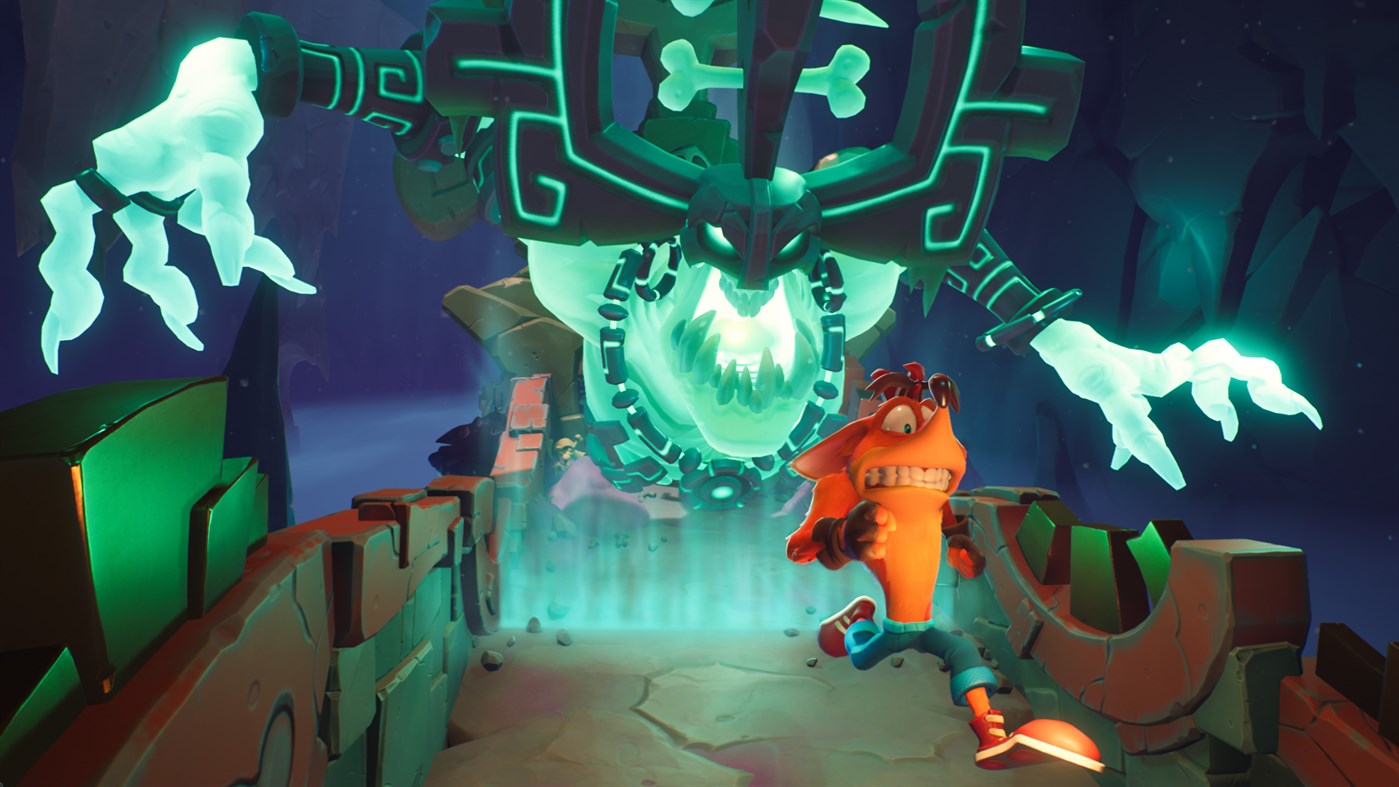 Probably the biggest decoy of Crash Bandicoot 4: It’s About Time is due to the four masks that Crash and his folks find to save the multiverse. Lani-loli is the bluish mask used to switch between two different timelines, but in practice it’s a skill that activates and deactivates platforms, boxes and other elements in different “planes”. Akano, on the other hand, is another mask which uses dark matter to make the characters use an infinite spin that makes it possible to glide in the air and reflect projectiles of enemies. We also have Kupuna-wa, the nicest mask of all, which slows down time for a few seconds. Ika-Ika is the mask that grants powers to reverse gravity, which creates several puzzles. All these ways of playing using the masks make the levels a real challenge. You can die about 60 times in the same scenario – yes, I did all of that. In fact, some stages at the end of the game mix the four masks and their respective gameplay.

After finishing the game – which is possible with about 30% -, Crash Bandicoot 4: It’s About Time makes you want to do 100% and even more. Everything becomes a stimulus for the player to return to the levels again and explore it till the end, either to find the hidden gems or to break all the boxes. The amount of skins available for Crash and Coco is absurdly high, and all are very well developed, creative and funny – some even are classic.

After the defeat of a specific boss of the game, the N. Verted mode (a joke with the word “inverted”) for all phases is released. Thus, an inverted colour filter applies to the screen – quite uncomfortable -, some levels are in black and white or the gameplay is accelerated. It increases the replay factor, but not all styles can please players. New gems are also available to collect and release even more clothes in this mode, except that some modifications are made in relation to placing boxes and even a gameplay in the dark is presented. Honestly: N. Verted reused the stages. However, the game offers enough main content on its own. There are 10 worlds in all, and around 40 levels not counting the flashback ones.

Bringing the concept of the past where we used to control when we wanted to play single player games with friends and family, Crash Bandicoot 4: It’s About Time revisits this by allowing players to take turns each time they lose a life or pass a checkpoint. In the main menu there is also the multiplayer mode for up to 4 people, but it is not exactly what you are thinking. There are not four players in the same scenario or playing simultaneously with split screen, but a competition between those who arrive faster at the end of the stage or make more box-breaking combos … one player at a time. Yes, Toys for Bob missed the perfect opportunity to create something in which two or more people competed in real time. Something easily seen in titles with similar structure like the incredible Sonic Heroes on PS2, where each player had their space on the screen and everyone fought each other for the best time. Too bad this mode is so basic and poorly used.

If I could sum up Crash Bandicoot 4: It’s About Time in one word, it would be “magnificent”. The fourth game in the series is simply incredible, lasting, knows how to stimulate with unlockables that do not charge a penny more to get them, and a gameplay that reminds me of classic titles while enhancing everything that has been seen before. Crash Bandicoot 4: It’s About Time is what Crash has always been, but elevated to maximum quality. There are plenty of hours of guaranteed fun for those who just want to see the storyline complete, but the game extends much more if you are the type who wants all skins. In the end, Crash Bandicoot 4 is that game that, even when I’m not playing, is with me in my thoughts.

Crash Bandicoot 4 is that game that, even when I’m not playing, is with me in my thoughts.