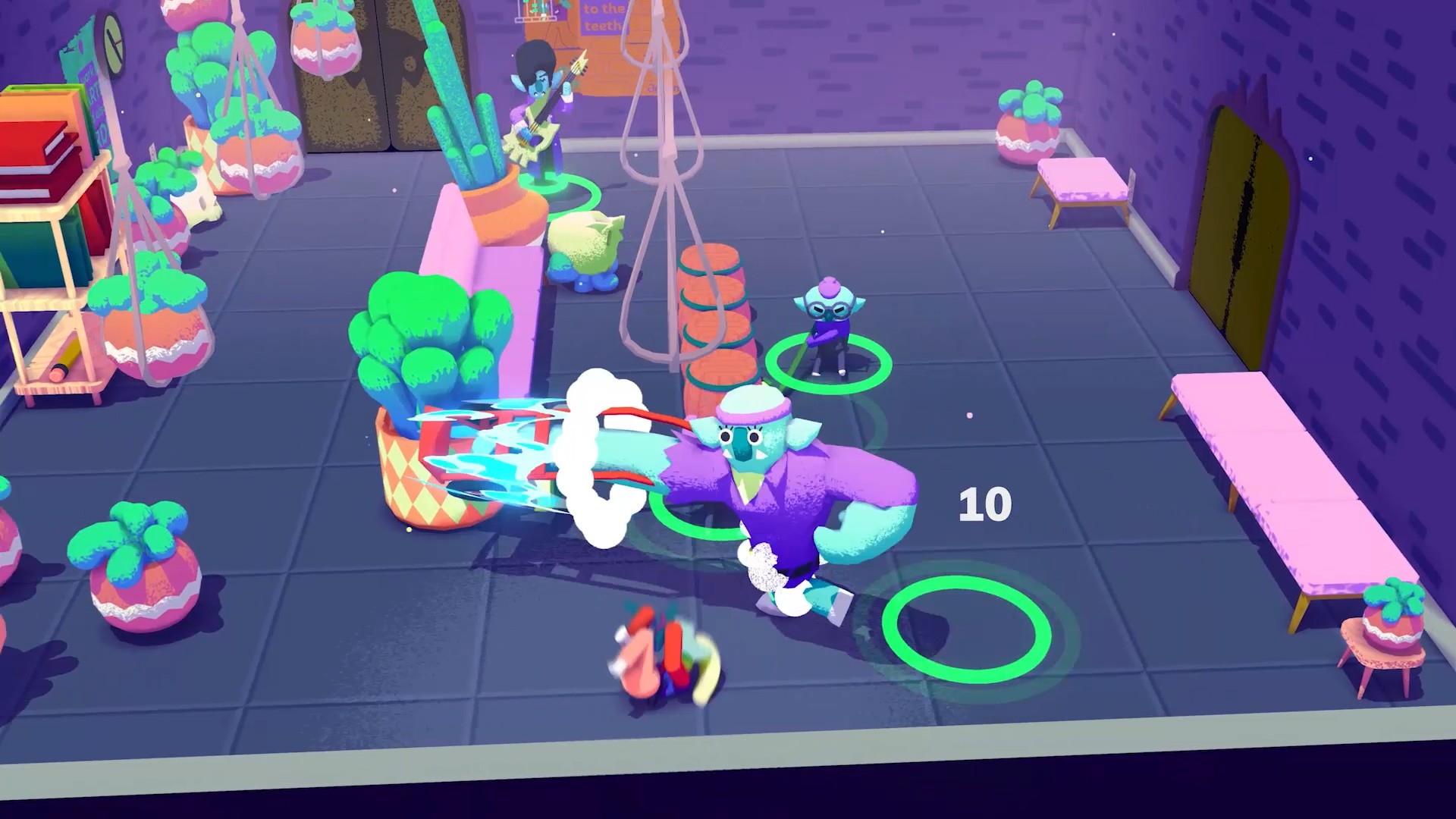 Going Under is the first game by Aggro Crab Games which, with the help of Team17 Digital, has brought this game into fruition. Going Under is a “satirical dungeon crawler about exploring the cursed ruins of failed tech startups”, as the Steam Store page clearly states, and I honestly don’t think I could put it into better words.

Over the past few years, there have been plenty of dungeon crawlers, each with their own little twists, unique gameplay mechanics, and major selling points, and while some have certainly found tremendous success, unfortunately, many others have fallen into obscurity because of a saturation of the market. Still, I must say that although Going Under doesn’t seem to have been making the headlines, it certainly seems to have been received quite well by players. Even though it’s competing for attention alongside many other great games, I found that Going Under is probably one of the most charming and delightful games that I’ve played in recent years.

Going Under puts you in the shoes of Jacqueline, a new marketing intern at Fizzle Beverages, a startup which got acquired by the Cubicle conglomerate. However, upon arriving at your workplace for your first day on the job, instead of being assigned to what you were really supposed to be doing, you find yourself tasked of eliminating the monsters that inhabit the office basement. The whole thing might not make much sense at first, but it doesn’t really need to, it’s better if you just play along and enjoy the ride. All will be revealed in due time.

Going Under follows the genre’s tropes for its structure and gameplay. As mentioned, your job entails clearing out dungeons inhabited by the minions of failed startups, of which there are three of them. Each dungeon has its own set of unique enemies and weapons, as well as a final boss, with each having their own set of attack patterns that you must learn if you wish to survive and defeat them easily. Furthermore, you’ll also run into special rooms, such as item rooms, shops, and challenge rooms. All of these aspects are specific to each dungeon, in the sense that they perfectly fit whatever that dungeon’s startup core activity was before they went bankrupt. Everything from the visuals to the weapons and the enemies are in perfect harmony with each theme, which I find to be quite amusing. 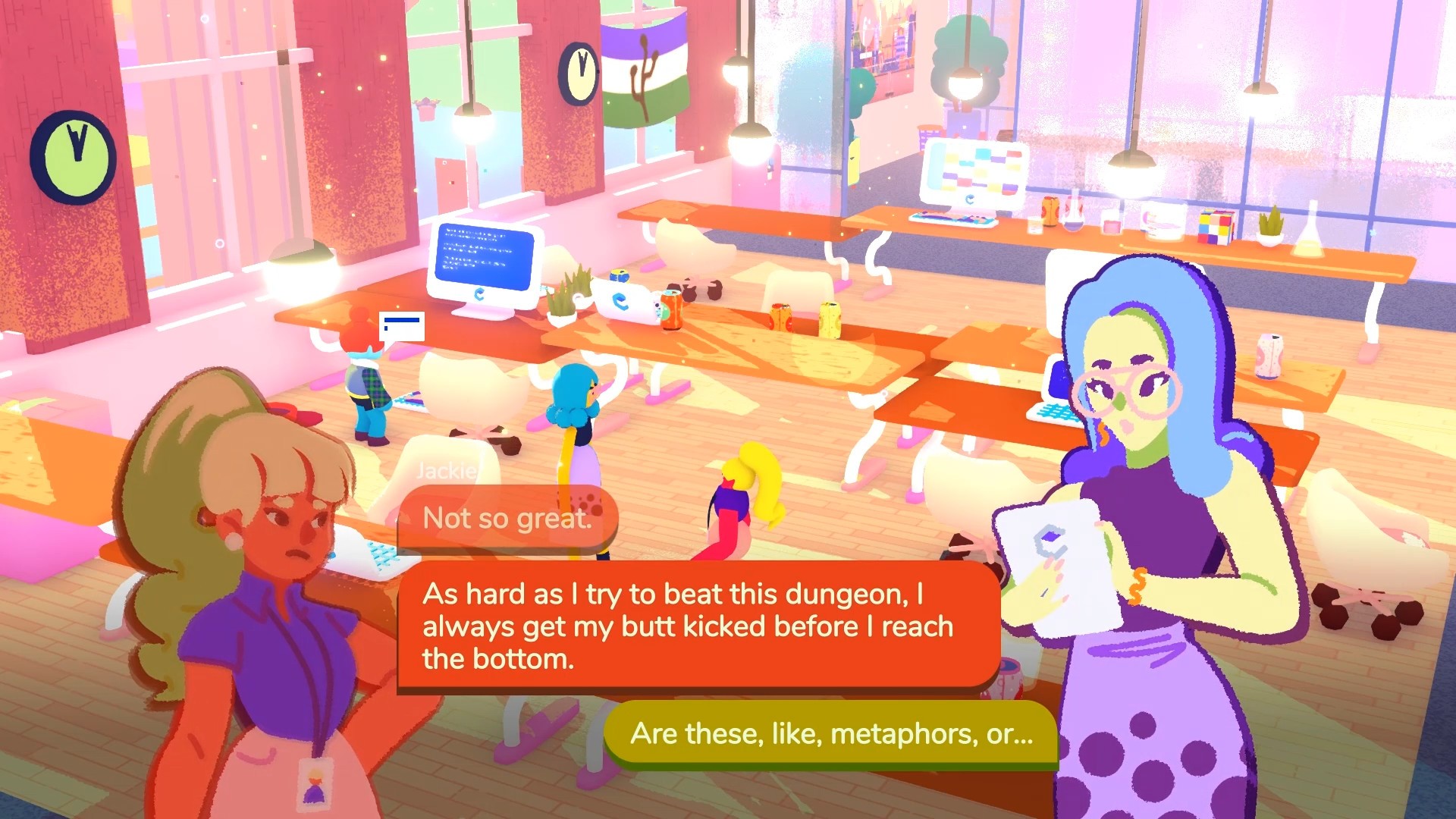 As for the combat, the game features a lock-on system with dodge, and you can also throw pretty much everything at enemies. There are just two different attacks, a fast attack and a heavy attack that needs to be charged (by holding down the attack key). Still, although a lot of games with a lock-on mechanic for melee combat tend to be best played that way, I found myself enjoying and performing a lot better by just using the directional analogue stick to choose the direction I wanted to attack. Given the nature of the combat, I just find it way easier to play the game with a controller.

How much fun a game’s combat is often related to how many or how its weapons handle, and fortunately enough, in Going Under, there are plenty of them. Here, weapons come in the form of the most mundane appliances and items such as brooms, laptops, staplers, clubs, pickaxes, keyboards, chairs, stools, body pillows, rocks, you just grab whatever is within reach and use it to smack monsters until they drop dead or until your weapon breaks. That is right, all items in this game eventually break once they hit hard enough. While I’m usually not really a fan of a durability mechanic in games, in Going Under that is barely noticeable due to the sheer amount of weapons at your disposal. If your weapon breaks during a fight, chances are you’re within reach of at least one thing that you can use to beat your opponents, and you can carry 3 different weapons at any time, so you probably will always have something to defend yourself with. On top of that, there are also apps, the game’s version of consumable active abilities, like being able to summon a companion to fight alongside you or use your smartphone’s flash to blind enemies for a short time period.

Like most of its peers, Going Under also features a progression system, one that rewards you with skills and mentor abilities, which will inevitably make your life easier as you spend more time in the game. First of all, each of your co-workers, which you’re able to chat with between runs, has a series of tasks for you, which range from walking their dog to the last floor of a dungeon, to simply killing a specific monster in a certain way. As you complete these tasks, your relationship will improve, and you’ll be able to choose one of them as your mentor for each run, which essentially grants you a special ability, like stealing a random item from a shop or earning more money. At the same time, there are also 74 skills that you can unlock by using Cubits, a special currency that you acquire as you play the game. Once unlocked, these skills will start appearing in future playthroughs and as you keep on using them, they’ll gain experience and when you gain enough of it, you’ll then be able to start future runs with those skills. Some skills might not be that special, but some are really game-changing, like this one that gives you a chance to turn the last enemy in a room into an ally, or another which knocks down enemies whenever you take damage. There are actually some nice combinations that you can come up with that synergize really well. 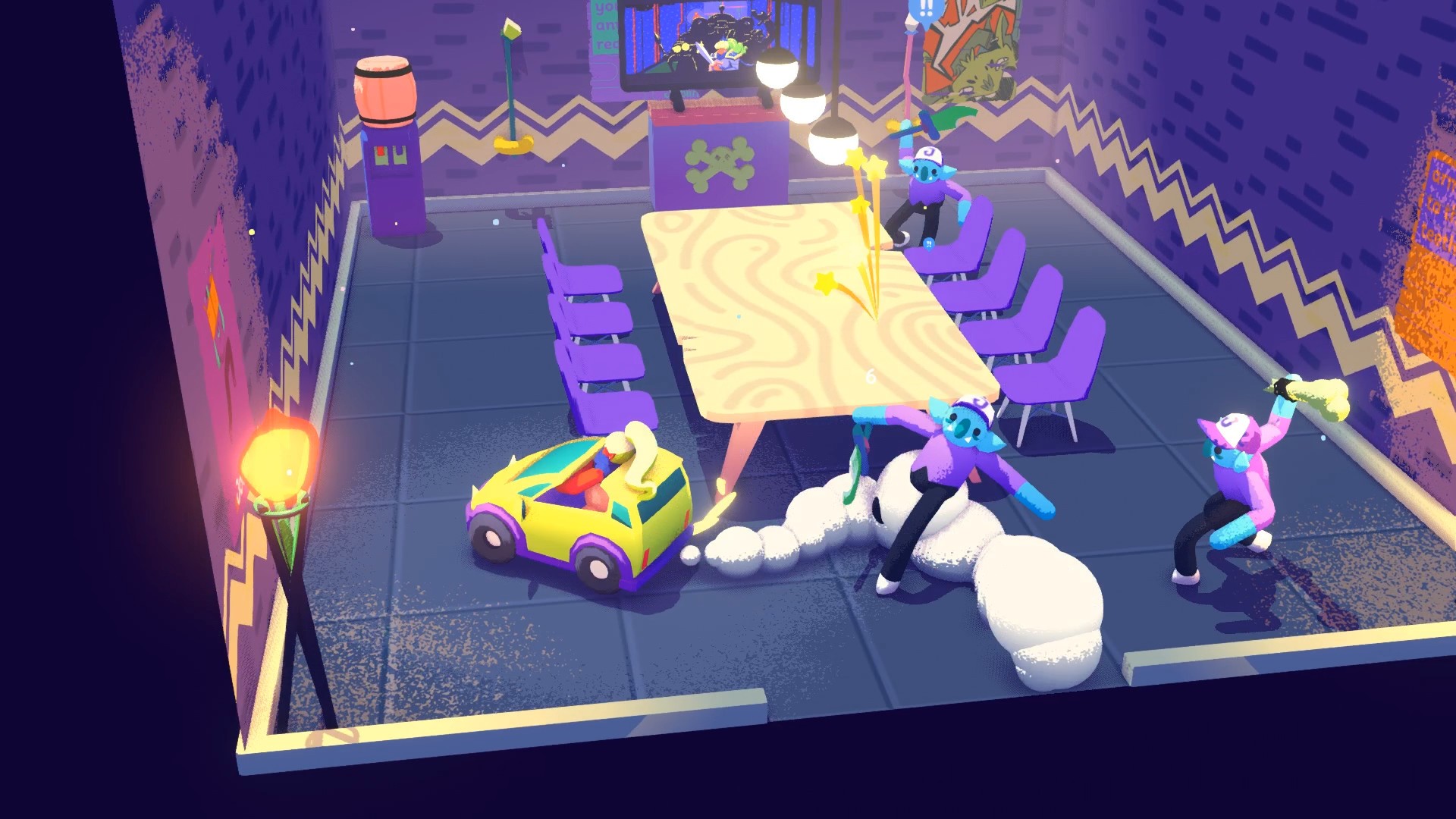 While I certainly enjoy smashing my way through many hordes of critters inhabiting each dungeon, I’d still say that the combat in Going Under isn’t really that complex or engaging. It works, and landing hits feels satisfying with its numerous weapons, but it ultimately is very bare bones. If you’re looking for a meaningful combat experience, I’m afraid you might end up disappointed. With that said, all this doesn’t mean that the game as a whole is bad or not worth playing, but it’s important to note that Going Under’s strengths are its world and charm, as well as how each game mechanic fits perfectly within the game’s theme.

On a different note, after a certain point in the game, the game actually ramps up in difficulty by granting you access to harder versions of the original dungeons, which include new enemies and more difficult bosses. While I could finish the first dungeons either on my first or second attempt, I found the game to be challenging once you get past this difficulty spike. With that said, Going Under offers a few “Assist” options, such as increased weapon durability or decreased enemy health, if you want to make the game easier for you.

Going Under is brought to life thanks to its bright and colourful world, characters, and animation work. Whether you’re walking around in the office space or fighting your way through the dungeons, Going Under never ceases to mesmerize me. Sadly, all good things come to an end. According to Steam, it took me about 10 hours to reach the end of the game, and yes, the game has an ending, a conclusion to its story. However, you can still keep on playing after that if you want to, or if you just want to complete any missing tasks. Personally, even though I enjoyed playing through the game, I’m not the biggest fan of the combat, and the reason why I’ve enjoyed Going Under so much was due to its characters and its world, so since I’ve explored everything there was to explore on that front, it will be awhile before I go back to it. With that said, the developers have already published a roadmap of what’s to come up until Q2 2021, so I’m eager to see what else will be added to the game.

Overall, Going Under has been a tremendous surprise, a game that came out of nowhere (unless I have somehow been living under a rock) and made me feel like I was fast-forwarding through time while playing it. It’s undoubtedly a great piece of creative work, and it proves that there’s so much more that can be done within this popular and overcrowded genre. If the concept sounds enticing, or if you’re just a fan of dungeon crawlers, roguelites, or whatever you like to call them, then I definitely think you should give Going Under a shot.

Despite its combat, Going Under is undoubtedly a great piece of creative work, and it proves that there’s so much more that can be done within this popular and overcrowded genre.