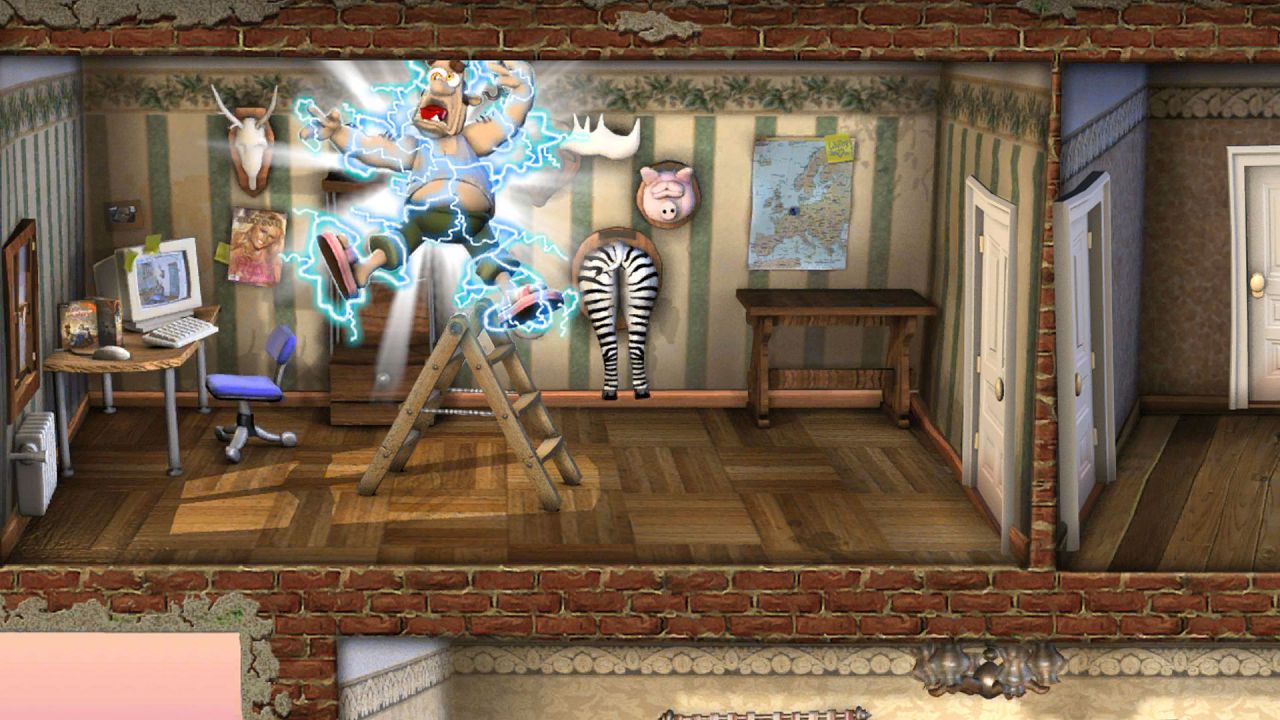 Whether you are a gamer for like, or gaming is your life, there will be titles that you’ll miss, never heard of or played, and despite reviewing games, I wasn’t familiar with the Neighbours From Hell franchise. Perhaps it had a bit of a cult following and fans will dance in the streets now they can play on their Switch, or people like me can see what the fuss, if there is any, is all about.

In the game, you play a guy named Woody. He hates his neighbours, the Rottweiler family, and the feeling’s mutual. A bit of a stereotypical thug, Mr Rottweiler is a classic stereotype; beer gut, slob, wears a vest all year round. He’s not winning any fans. The family aren’t desirable neighbours, and Woody has his fair share of run-ins. Rather than do the ‘correct thing’ (which doesn’t work in real life) maturely discuss then involve relevant parties, he secures a camera crew and plays pranks. Perhaps he’s on to something?

If you’ve played the game that came out over 20 years ago, you might be already familiar with this, but taking a fresh approach, there’s something incredibly dated about the game. The character models and locations are very good, but they look like they’re based on decades-old technology – when you first saw CG rendered scenes in a game, but your Pentium 2 was never quick enough to play it. But that wasn’t my issue with the game; it was the canned 70s like humour. 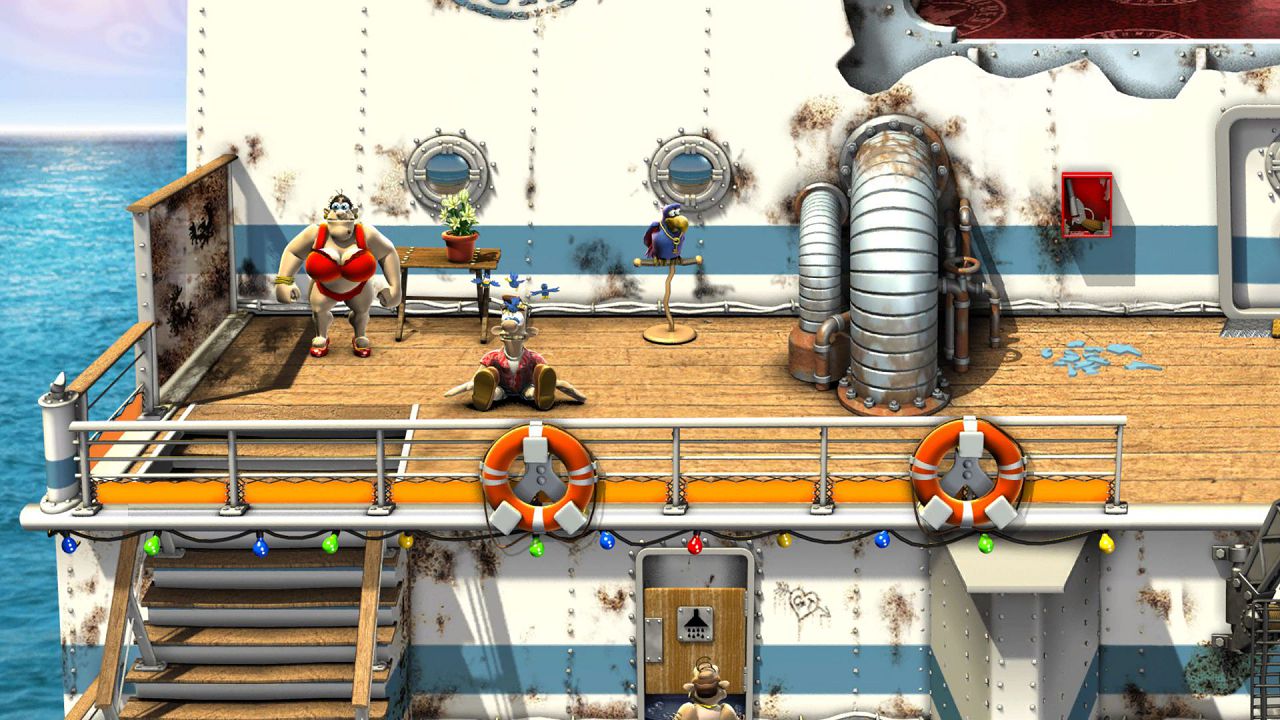 Woody, already committing a crime by breaking and entering, but also vandalism and fast-tracking himself to an ABSO sneaks into the house and hides in a relatively safe location to watch the patterns of his subject. If you’re seen, you get a beating and lose a life, otherwise, you scavenge around for household objects to sabotage the victims’ quality of life. Each time you do it, they get into a rage. You get a laugh and earn a badge to proceed. Each stage adds several challenges you need to complete before you can exit the house. What these challenges are is down to your experimentation.

The 70s reference reminds me of an old sitcom your grandparents might watch; the decor, fashion and jokes remind me of that cheesy Just For Laughs show you always end up seeing on long-haul flights. So Neighbours Back From Hell isn’t doing well, right? On the surface, no, but the experimentation with pranks and sneaking about without getting caught is surprisingly fun, if a little repetitive.

You can use the right stick to look around at any time and make a note of the patterns, but it’s usually quite rigid and once you ‘get it’, you can run around a level as if you’ve orchestrated it yourself. That’s not to say it’s easy as sometimes it’s not clear what you have to do to trigger a prank and other times you have to instigate one to activate or link to another. But again, that’s all part of the exploration of the game and is genuinely fun.

There are a few locations to play in and comprise individual missions or shows if you like. The first attempt will be the introduction, then you do the next level and need to perform a couple more challenges to complete the stage, and this pattern continues. Unfortunately, a lot of the pranks are repeated, and in later stages, you’re just repeating those before and in a manner that’s so clinical, so you don’t lose any lives and do it in the fastest time. If that’s your thing. 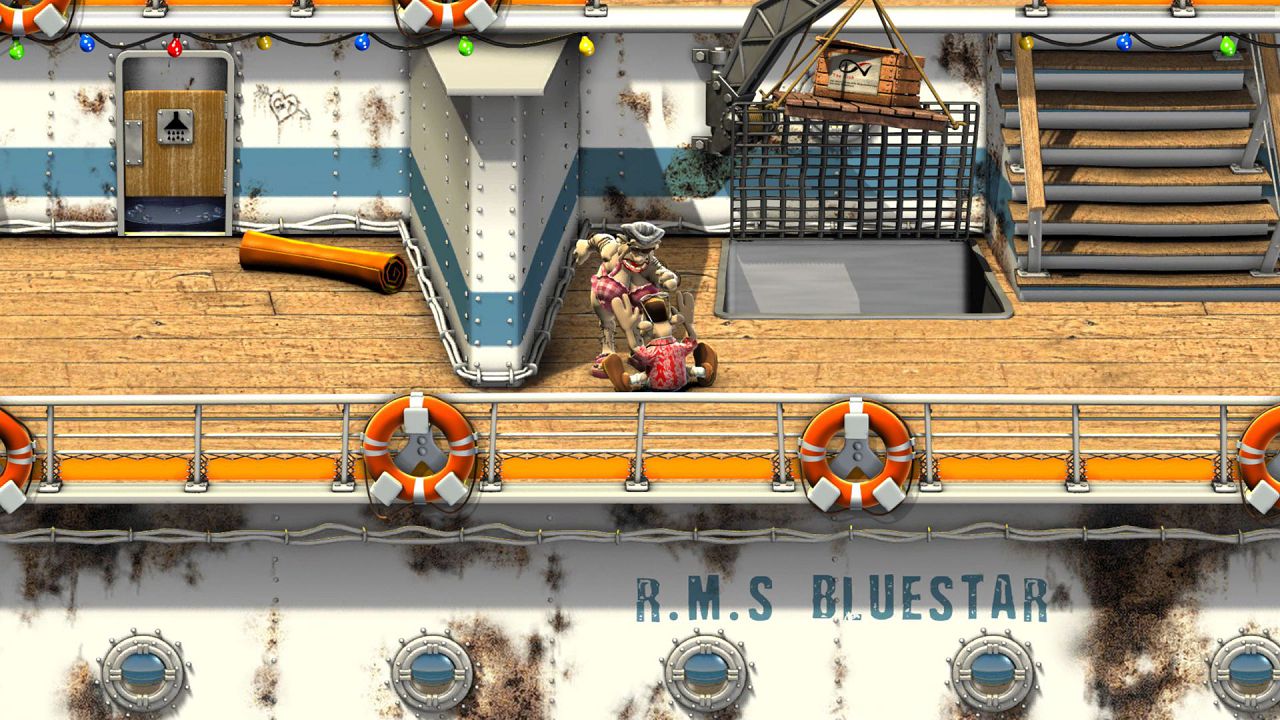 While the presentation is quite dated, that shouldn’t deter you if you consider all the 8-bit, 16-bit retro reboots. That said, there were a lot of animation glitches such as walking through the door. Two Woodys would appear, only for a couple of frames, but noticeable. Additionally, movement is quite sluggish, so you must prepare your ‘run’ well in advance as Woody is responsive enough to escape being caught.

There’s not much challenge to Neighbours Back From Hell other than the sluggish movement and working out want to do in terms of pranks. Objects will interact with items or they won’t, and there are not many items to pick up or interact with in the first place. It’s the process of elimination, and for that reason, the game can feel a bit of a bore if you play one stage after the next – especially when the stage before it was so similar.

Neighbours Back From Hell is enjoyable enough, in small doses, but it’s a little under polished with its animation and somewhat stereotypes in the game. Again, the logic behind the game; hiring a film crew and playing pranks on your neighbours is absurd, and while that can work in the game’s favour, it is a very low-key event. Perhaps wait for a sale with this one.

A dated title in terms of presentation and execution, Neighbours Back From Hell is quite a janky experience with choppy animation and repetitive gameplay, but it does entertain, in small bursts.