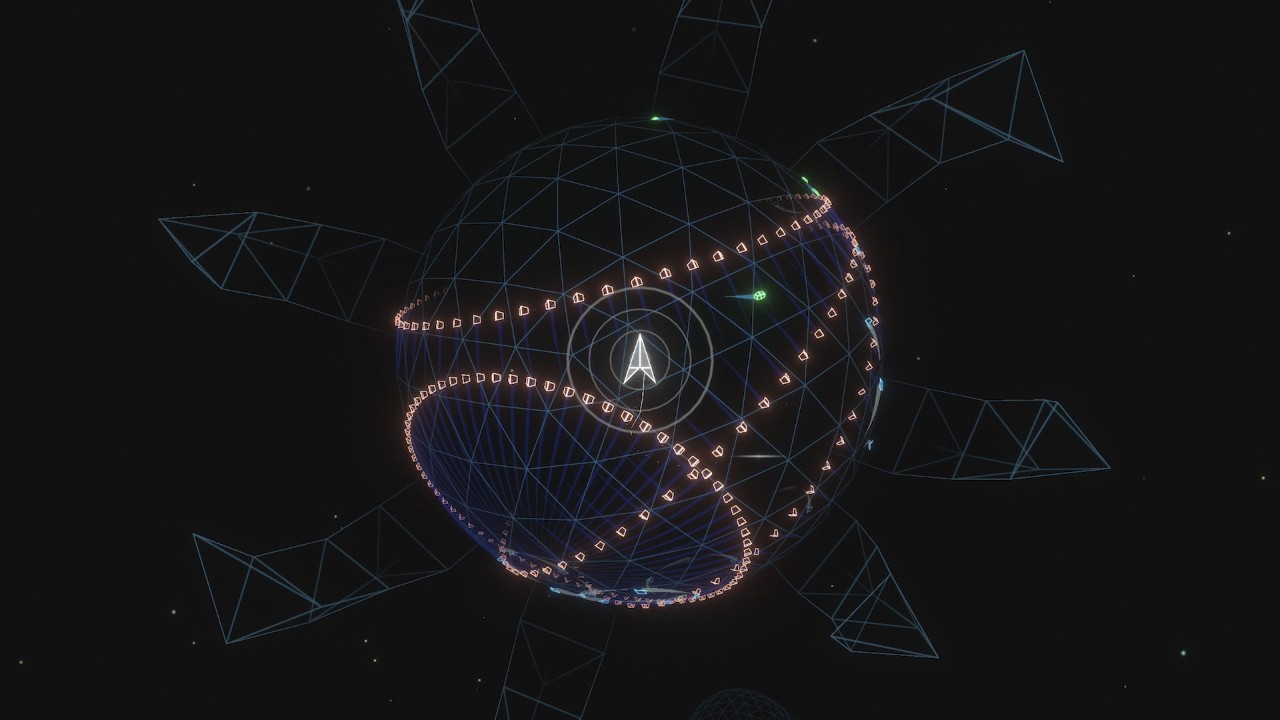 There’s something to be said for a game that you understand from the moment it comes online. Often, there is a bit of deconstruction to fully grasp what is going on and how you’re supposed to approach it. That is not the case with Apt Games’ first release, Terror Squid. You will understand what you’re SUPPOSED to do in about five seconds. Actually doing it well, however, is a horse of a different colour, and what happens from there is a descent into feverish, nightmare-level focus as you desperately try to appease your inner demons.

The concept is straightforward: you are a triangular ship on a spherical planet. As your ship moves forward, it leaves behind a series of colourful bullets that continue to travel, without friction or energy depletion to slow them down, until they hit something. In this case, the something is you. The planet is not very big, and it’ll only take a moment until the bullets that you dropped behind now are in your field of view. Your ship has two solutions for survival (besides the obvious dodging). The first is the dash, which is an infinitely reusable, very dangerous tool. The dash allows you to momentarily sprint ahead in one direction, creating temporary invulnerability and allowing you to weave tiny gaps between the bullets to a new, clearer area. The problem is that the dash stops (however shortly) the filling of the detonation gauges. The gauges are tied to your secondary ability, which is the detonation, and is significantly more dangerous than the dash. When the detonation gauge flashes red, it means you can now trigger an explosion that will eliminate bullets that are in close proximity to you. If the bullets are well spaced enough, then this could create a massive chain reaction that will get rid of most of the bullets that you’ve just dispensed. However, triggering the detonation ends the “ritual”, which is what we call the waves of bullets in this game. Now you’ve moved onto the second ritual, and the bullets change form and movement patterns. 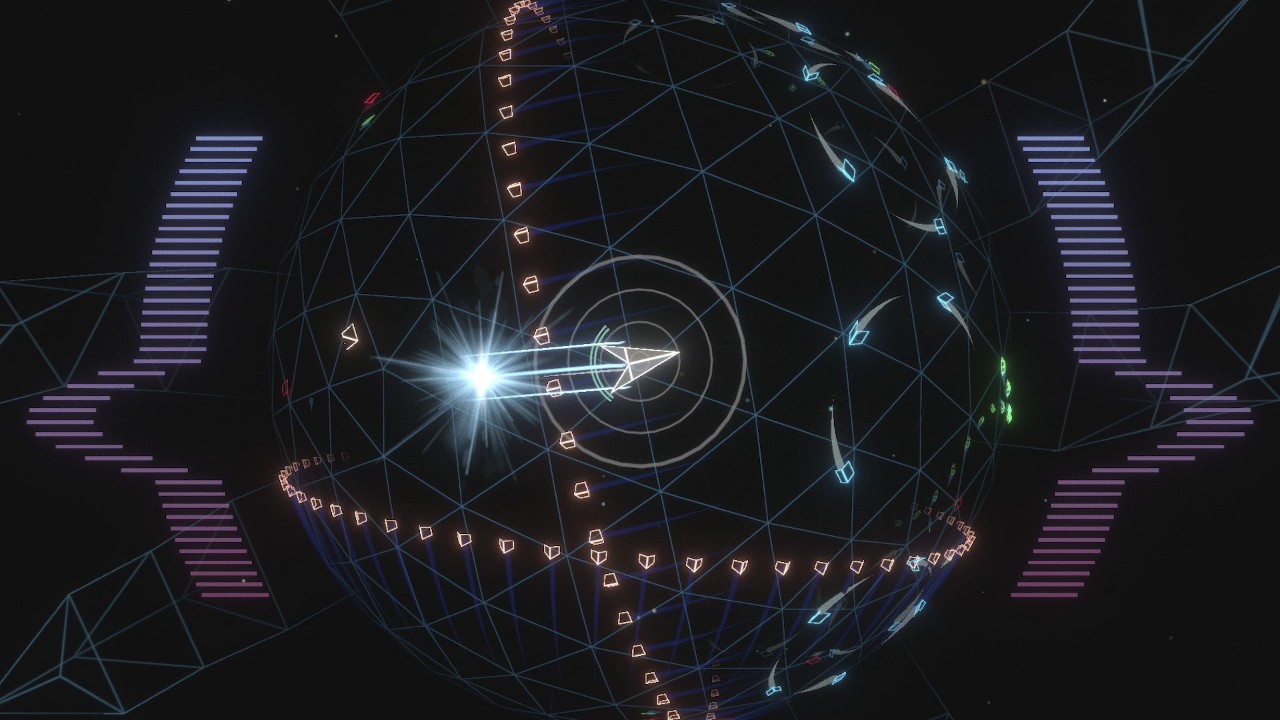 As you get pulled further into Terror Squid, your prowess and fast reactions will show even more diabolical designs. From the simple red pellets that float out in a singular direction, you begin to see wave patterns that cover more ground. Circular rings of chevrons slowly dispense outward, covering ground that is very hard to navigate through even with the dash. If you’re extremely patient and lucky, you’ll live to see the eighth ritual, which creates a series of purple shapes that almost seem to be following an unseen, unimaginable command of directions, allowing them to suddenly dart and change directions, often in your general path. Getting past the eighth ritual, then brings you to the 9th, which repeats the bullet patterns from the first, and theoretically repeats ad nauseum but I really couldn’t tell you for certain. I did okay with this game, but I am by no means an expert.

Players should definitely be on guard for Terror Squid, both in terms of performance and how it is presented. If you have any experience with titles such as Super Hexagon, you might have a general idea of the level of focus and stress-induced anxiety that comes with such a game. It’s interesting that it’s labelled as a bullet hell, because, which that’s technically correct, it’s not as though you have a real defence against the enemy that is yourself. Dashing and dodging, combined with well timed detonations, should be enough to get you to the fifth ritual, and everything after that becomes a matter of risk and reward. It’s tricky to set off the detonations as it does bring about the next ritual, though it’s still not clear to me if it’s better to stick in a single ritual and see how long you can go OR to simply set it off as quickly as you can. My advice is to keep speed exploding till you get to the seventh, and then just relax. The seventh is a massive, immobile ring that encircles the planet landscape, but doesn’t move once it’s reached its apex. Plus, they don’t fire from the back of your ship nearly as quickly as most other projectiles, so you can comfortably dodge and survive here as long as possible.

The detonation aspect is interesting because it’s necessary for survival, but it lacks a certain incentive to really make the combos work. Sure, there is an excellent range of definition words that are thrown at your combo success, though they almost appear arbitrary. I got “Cool” for ten, but “Deplorable” for thirteen, yet Monstrous was a 243 combo, while Galactic was an even 220. There’s no point score that I can see, though the big words are fun to achieve. Instead, the detonation almost feels like a personal achievement leaderboard, in opposition to the actual achievements (which are called Sigils and come about for deaths, rituals and long survivals). No, it’s all about the timing, and being able to survive to the longest possible time is going to be a feat for anyone. There’s a worldwide leaderboard, though the current high score belongs to “Oniichan69,” which I feel like a.) is a joke and b.) holy crap, is five times further ahead than the next closest person. Good luck to whomever can catch that dude. 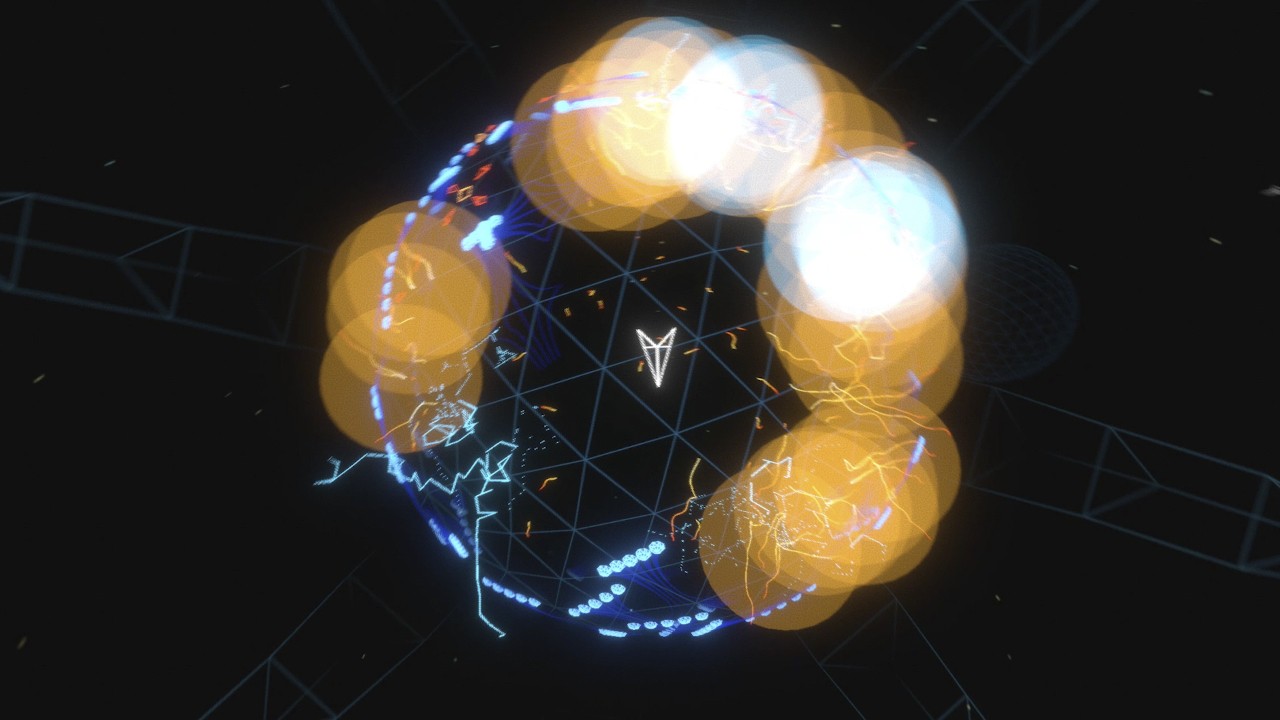 Terror Squid is also a tad confusing because I feel like it’s actually trying to incite someone’s moral barometer or attempt to inject more of a sinister tone than there actually is. If you bother to watch the insane, two minute long promo commercial that Apt Games made for Terror Squid, you’ll get the sensation that this is going to descend into some kind of eldritch horror scenario, complete with vomiting thick black ooze, tearing off fingernails (I HATED THAT) and quick cuts a la American Horror Story. The actual gameplay then makes a point to “reward” your deaths by flashing quick text across the screen like they’re delivering subliminal messages, and most of them are nihilistic and meant to be taken as scary. Things like Part the Veil, Embrace the Void, Repetition is…something, something, something Authority, I think something about Pain, etc. They’re all flashed super fast and are combined with sharp angles to instill this idea that the game is actually hacking your brain like this is going to be an urban legend title in the future. It just didn’t jive with me, and it sort of put me off of it. Like, the menu has the proper unsettling synth feel, and there’s a distortion that makes the creepiness work, but it just didn’t have the same effect that I think was intended.

All matters of horror aside, Terror Squid is a well constructed and unique take on the survival trial game. With a simpler approach to the idea than some, you can easily dive into what needs to be done, and it’s up to the player to figure out how long they’re invested in trying to unravel the final Sigils and achievements. Personally, I’m gonna take a long break from the game: the constant flashes upon death have given me a minor headache, and the game music, though good, is repetitious and stuck in my head. I’m currently in 5th place in the global high score, but I strongly suspect, as long as the game gets a good fanbase, that I’ll be knocked into obscurity shortly. If you enjoy the pressure of surviving through a hell of your own creation, then you can come swim along with the intensity of Terror Squid.

Far from being a Halloween expansion for Nussoft, Terror Squid crafts a clever survival arcade game with some unnerving undertones that are somewhat effective.